A lot has changed in 100 years, and we have more ways to help us in the kitchen than ever before.

But we can still learn something from our 20th century ancestors, whose clever hacks could come in useful even today.

A Youtube video producer, known as Household Hacker, found a stash of rare cards that are at least 100 years old, which have some very handy kitchen tips written on them.

The Hacker, aka Scott Kinmartin from Oregon, tested them out and found that the old hacks still work.

The Household Hacker, whose video has had 327,000 views, found a stash of old cigarette cards which provide useful household advice on them, including how to cool down wine without ice

Even more incredibly, the tips are still useful, despite the fact there has been an electronic and digital revolution since the tricks were conceived.

The cards, which are all titled ‘How To Do It,’ were issued by a cigarette card company called Gallaher Ltd of Belfast and London about 100 years ago.

From a tip for cooling down drinks without any ice, to a solution for separating two glasses that have stuck together, the hacks in the video could help you save time in the kitchen. 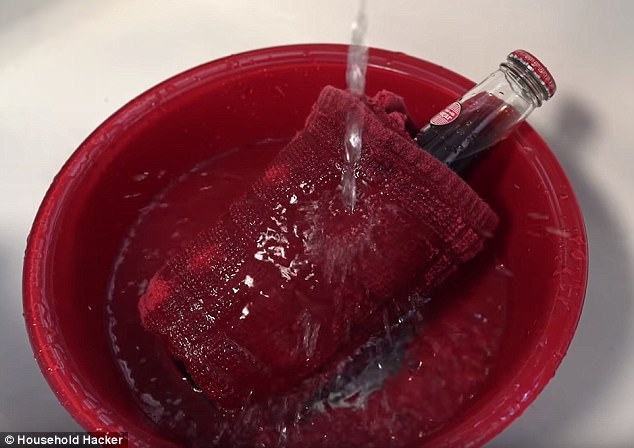 Household Hacker shows viewers the 100-year-old kitchen hacks card, which advises that you can cool down wine or any other drink without the need for ice if you ‘wrap the bottle in flannel and place it in a crock [an earthenware pot] beneath the cold water tap’.

It continues: ‘Allow the water to run over it… and in about 10 minutes, the wine will be thoroughly cool and ready for the table.’

The Hacker tests out the tip, and manages to cool down the bottle significantly in just 10 minutes.

It could be useful if you’ve run out of ice or don’t have time to nip to the shop for more. 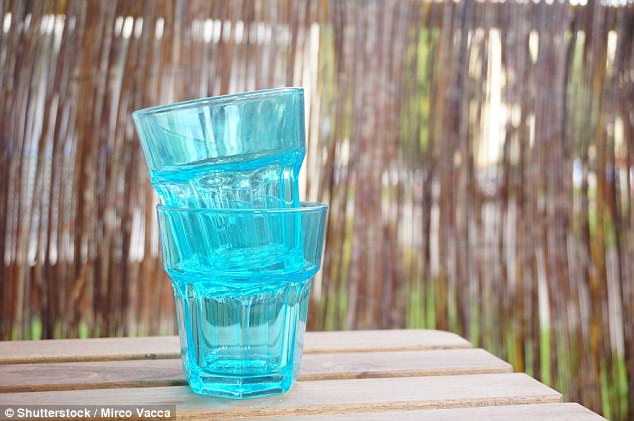 Tumblers can stack, which saves room in the cupboard, but occasionally, one glass can become stuck in another.

The antique cards have a solution for this problem, however.

To avoid ‘danger of breakage,’ a card recommends that families pour cold water in the top glass, and place the bottom glass in warm water.

‘They will be found to separate at once,’ the card assures.

The Hacker tries the trick, using ice water in the top, and find it works perfectly.

It can be hard to hand wash vases and bottles as you can’t reach in to clean the whole vessel with your hands.

But the antique cards reveal a trick for how to reach every corner of a bottle or glass vase.

It advises that ‘a little sand and water should be well shaken about inside them.’

It continues: ‘This will have the effect of cleansing every part, and the bottles can then be washed out and dried.’

The Hacker uses rice grains instead of sand, which could scratch the glass, and finds that the trick works just as well. 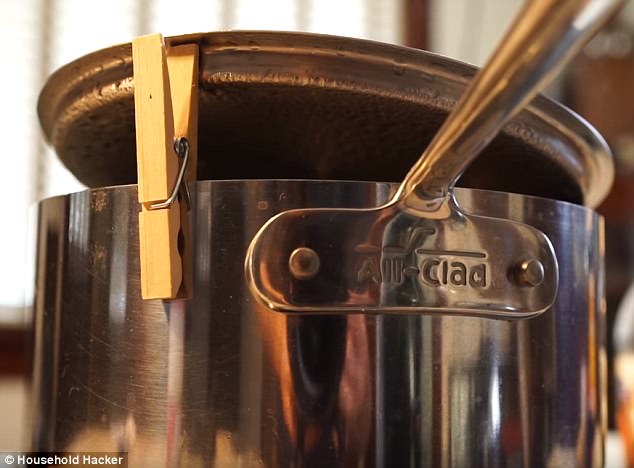 Sometimes you want to leave a pan on the stove with the lid on but with a crack of air.

Although you can balance the lid on top, the old cards reveal there is a more secure way to keep a lid raised and in place so you can complete other tasks in peace.

They recommend using a clothes peg to keep a lid ajar.

The card reads: ‘Drive a tack into the top part of the peg, and then fix the peg over the edge of the saucepan as if it were a clothes line.

‘The lid rests on the tack and is thus kept open.’

The Hacker tries it out and reveals that it works by pinching the peg so that it clasps around the top rim of the saucepan.

The lid then rests on one of the top parts of the peg, with a tack keeping it stable. 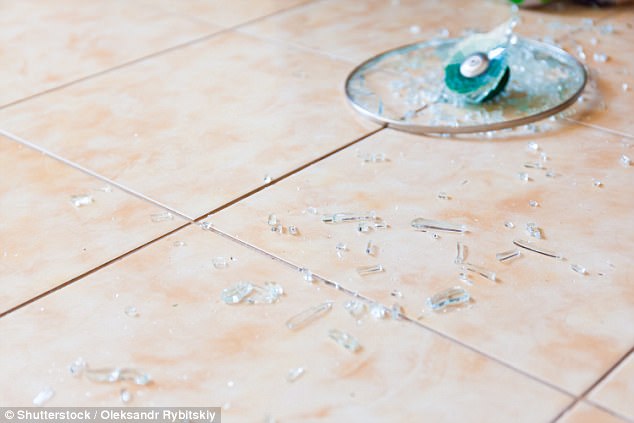 To avoid missing any tiny shards of glass, the cards recommend that you swipe up the rubbish with a damp cloth

The cards also have a hack for clearing up broken glass quickly and effectively, ensuring that you don’t miss any tiny shards.

It says: ‘A soft damp cloth will be found to be most effective, for it takes up all the small splinters.

‘The best plan is to use an old piece of rag that can be thrown away with the glass’.

The Hacker tests it out, and sure enough, cleans up broken glass with just one swipe. 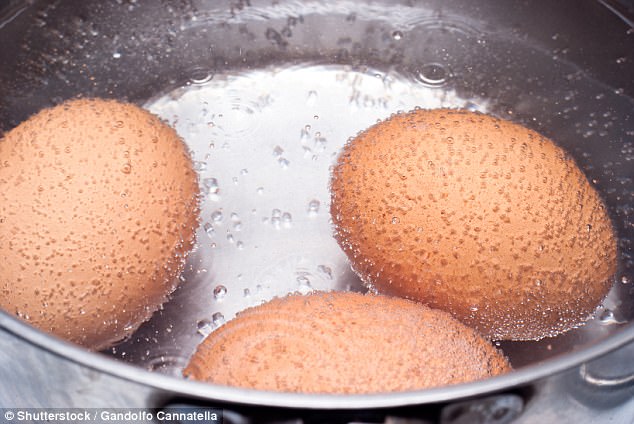 It’s tempting to just throw out a cracked egg if you want to hard boil them, but the cards reveal there is a way to cook them without damaging them further.

‘A little vinegar should be added to the water,’ it explains. ‘If this is done, it will be found that none of the contents will boil out.’

The Hacker tries boiling a cracked egg without putting vinegar in the water first, and finds that the contents boil out.

But when he adds vinegar to the water, the egg white and yolk stay inside, despite there being a crack.