This 1971 Ford Escort could set a new auction record when it goes under the virtual hammer over the the next week with experts predicting it will fetch around £65,000.

Not only is it a stunning and original example of the fabled RS1600 Mk1 Escort from but was also first registered to Ford for use as a show car when brand new.

Very few examples of this iconic Fast Ford survive today and this is one of only a few to not have been converted into a rally car, with the Maize Yellow RS having resided with a single owner in Northern Ireland for the last 50 years.

The current record price paid for a road-going, unmolested, Mk1 Escort RS1600 is £70,875 in 2018, though this one might just eclipse that figure in the next few days.

Could this Escort RS1600 set a new record? Car used by Ford as a show model in 1971 to go under the hammer with a guide price of £65k – but it could eclipse the previous record fee paid

It will be sold by online specialist Car & Classic, which runs eBay-style week-long auction lots aimed at motor enthusiasts and collectors.

The auction for the 1971 Fast Ford started on Wednesday evening and ends of 18 May – and is expected to attract plenty of attention, especially among avid fans of period cars with the blue oval badge.

The Escort is one of the long-standing iconic models in the history of rallying, dating back to when the first-generation car hit the market in 1967.

For collectors hunting for the prime Mk1 Escort example, this one ticks all the right boxes.

It has its original Cosworth-developed 1.6-litre, 16-valve BDA (Belt-Drive, Type A) engine, which generated 115bhp when new.

This was sufficient to propel the car from 0-to-60mph in a claimed 8.5 seconds and a top speed of almost 115mph.

The tunable powerplant combined with the Escort’s legendary rear-wheel drive meant plenty of these cars were taken from the road and prepared for rally stages, meaning most had uprated engines, stripped out interior and roll cages installed.

But not this one. 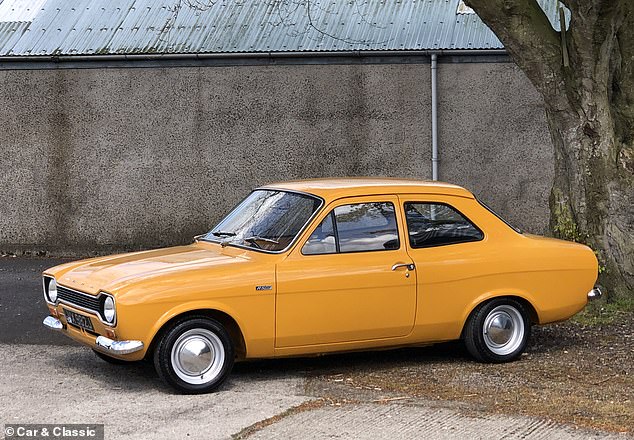 It will be sold by online specialist Car & Classic, which runs eBay-style week-long auction lots aimed at motor enthusiasts and collectors 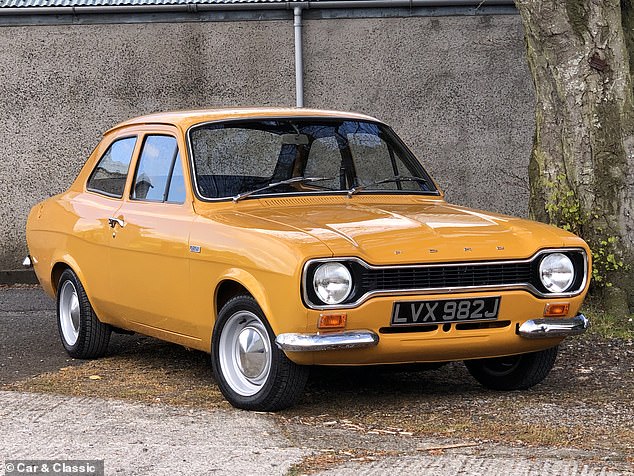 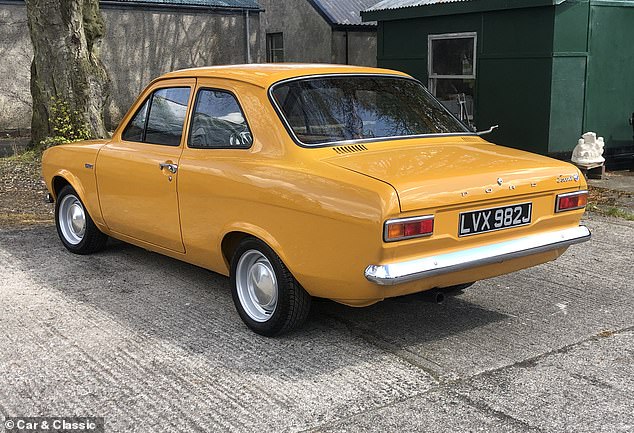 It was first registered to Ford in 1971 for use as a demonstrator for its press fleet.

It’s one of only a few genuine AVO RS1600 ‘Custom’ models that remain in existence today that is mechanically authentic, with the original suspension recently rebuilt.

Ahead of making it available to the highest bidder, the vendor also commissioned a ‘glass-out’ comprehensive paint and body refresh.

Unlike many RS1600 Escorts, this example still has its 13-inch steel wheels and hubcaps and a few other features that make it historically correct, including the black cloth sports seats, the six-dial instrument cluster and a dashboard that has never had a radio retrofitted into it. 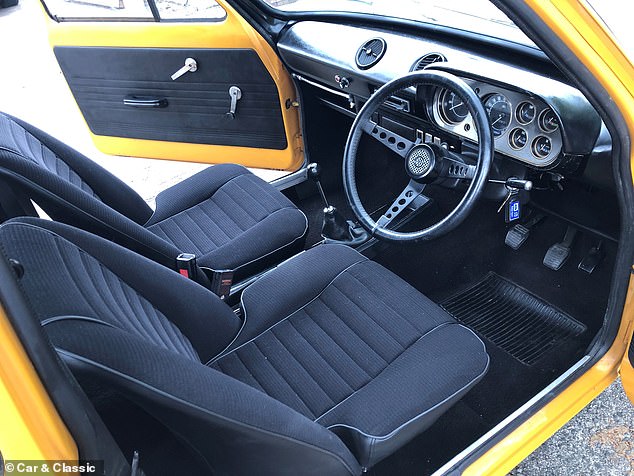 As you can see from these images, the car is in meticulous condition inside as well as out 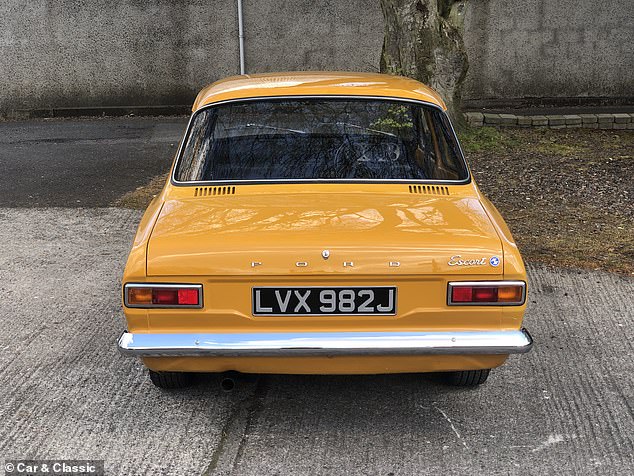 Even the number plate is much desired by Fast Ford fanatics, with the factory ‘LVX’ registration legendary as it is the same as what the works rally cars had 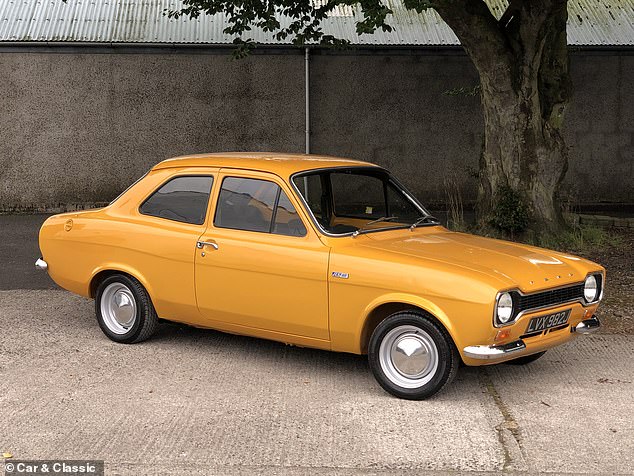 Even the number plate is much desired by Fast Ford fanatics, with the factory ‘LVX’ registration legendary as it is the same as what the works rally cars had.

It also still shows the ‘Show Unit’ emblem on its body plate and is being sol with fully-documented history – including a correctly-titled V5 and its original green logbook in Ford’s name – which will only increase its value.

It is showing as having 74,901 miles on the clock, though because these have all been covered on the road, it shouldn’t be a number that puts off potential buyers.

It works out at an average of only 1,469 miles for each of the 51 years since it first came off the assembly lines. 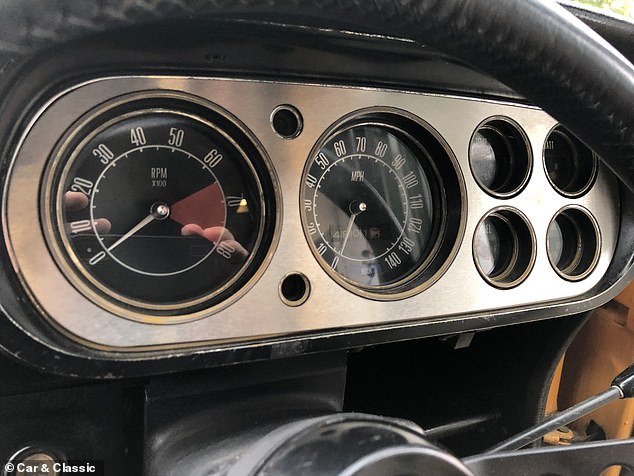 It is showing as having 74,901 miles on the clock, which have all been covered on the road 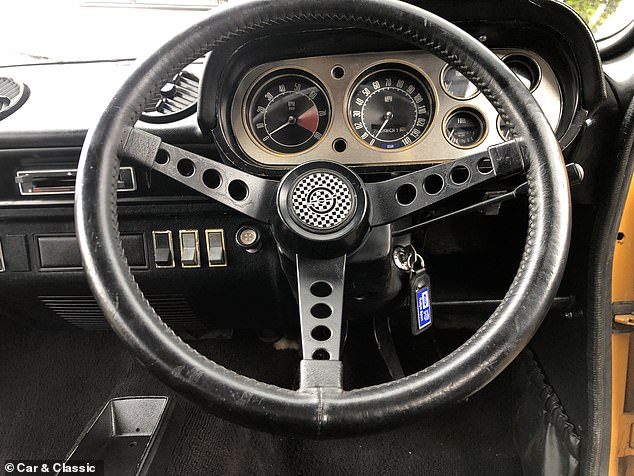 The cabin is fitted with black cloth sports seats, the RS1600’s six-dial instrument cluster and a dashboard that has never had a radio retrofitted into it 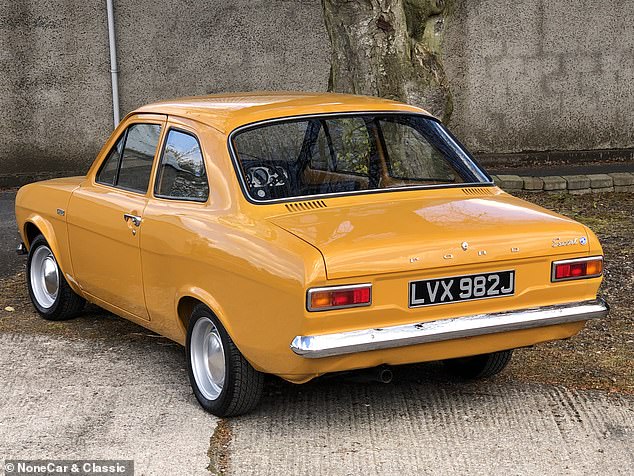 Unlike many RS1600 Escorts, this example still has its 13-inch steel wheels and hubcaps and a few other features that make it historically correct

With so few surviving examples, a version with continuous history and never having seen action on the stages is likely to make big money.

‘This is a true icon in Ford’s sporting history and as one of the first cars to sport the hallowed badge here in the UK, it’s expected to be a target for those Ford fans seeking what many consider to be the most revered and rarest,’ explains Chris Pollitt, head of editorial at Car & Classic.

‘Cars with this kind of provenance don’t come along very often, especially not in fully restored condition. There’ll never be another opportunity like this…’ the auction house adds. 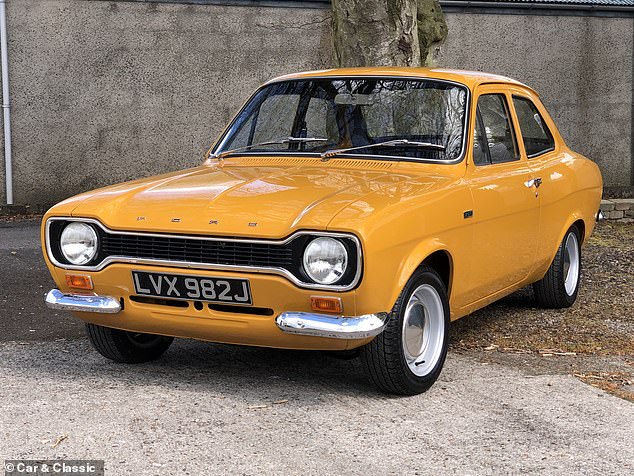 This particular example’s condition and provenance could see it surpass the existing auction record for a road-going RS1600 – a figure of £70,875 paid at a Silverstone Auctions sale in 2018 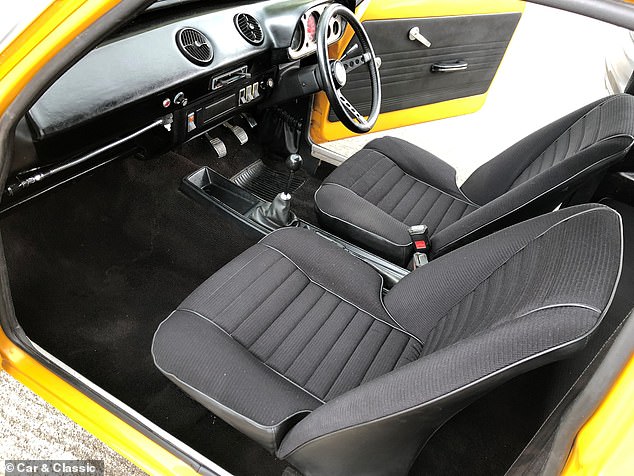 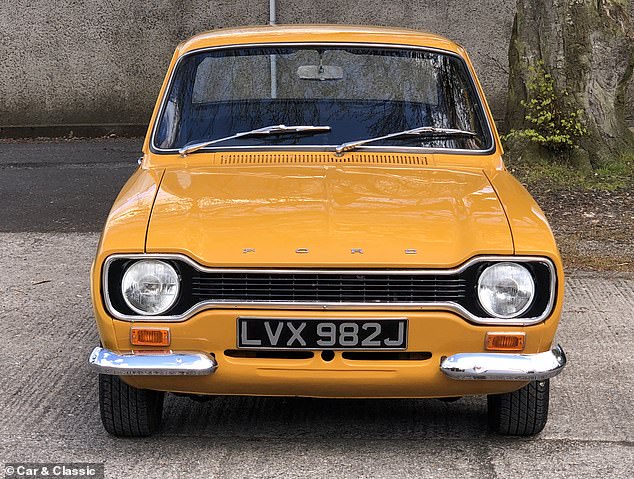 The auction for the 1971 Fast Ford started on Wednesday evening and ends of 18 May – and is expected to attract plenty of attention, especially among avid fans of period cars with the blue oval badge

However, Classic car valuation experts Hagerty says it has all the ingredients to become the most expensive road-going Mk1 RS1600 sold at auction in the UK.

This particular example’s condition and provenance could see it surpass the guide price and could even breach the UK auction record for a road-going RS1600 – the £70,875 achieved at a Silverstone Auctions event four years ago.

That said, John Mayhead, Hagerty’s in-house valuations guru, warns: ‘Higher priced vehicles have been offered for sale and a ‘no sale’ pattern has emerged.’

The most expensive rally-converted Mk1 Escort RS1600 to sell at auction changed hands at Bonhams’ Goodwood Revival sale in 2018 for £92,000.

The 1971 Mk1 Escort RS1600 isn’t the only Fast Ford set to go to the block this month, with Silverstone Auctions hosting a sale on 28 May at Sywell Aerodrome in Northamptonshire that will offer three rare – and pricey – modern-era performance cars with the famed blue oval logo.

Two are the highly-prized Sierra hot hatches from the 1980s, one being a standard RS Cosworth and the latter a limited-edition – one of just 500 – RS500 ‘homologation special’ examples. 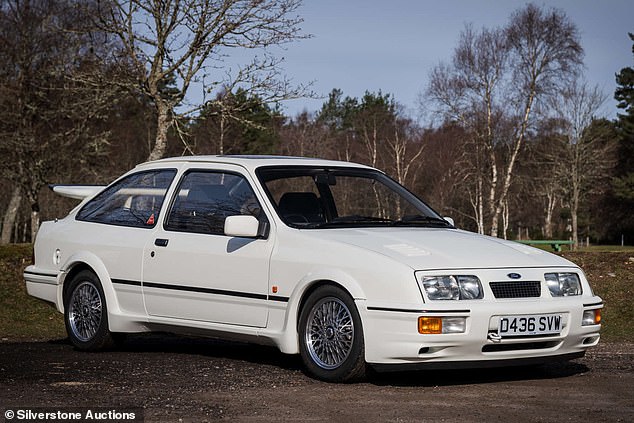 This is one of the earliest Ford Sierra RS Cosworth examples built in 1986 and was originally used as a press car, meaning it has made plenty of motoring magazine appearances. With only 19,000 miles on the clock, it is predicted to sell for up to £80,000 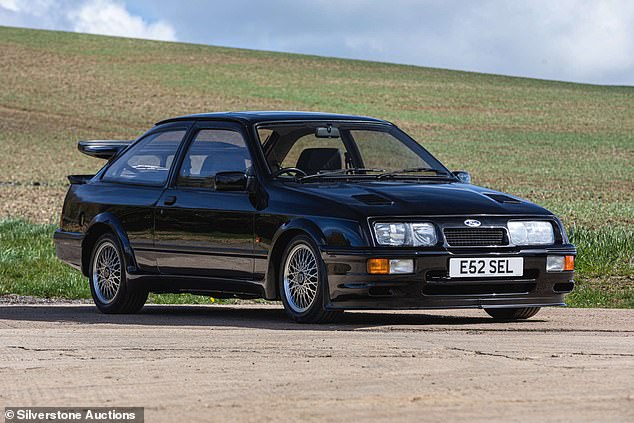 This is one of the limited edition ‘homologation special’ RS500 Cosworths that was, by all means and purposes, a racing car for the road in the late eighties. It has 35,000 miles on the clock and could sell for close to six figures

James Clover from Silverstone Auctions said: ‘There’s nothing quite like the ‘real deal’ to tick the ultimate road-going RS Cosworth off your bucket list, and that’s exactly what we have here.

‘This particular RS500 is a lovely early example of the breed, and has been kept in excellent condition throughout its life, remaining in fantastic shape to this day.’ 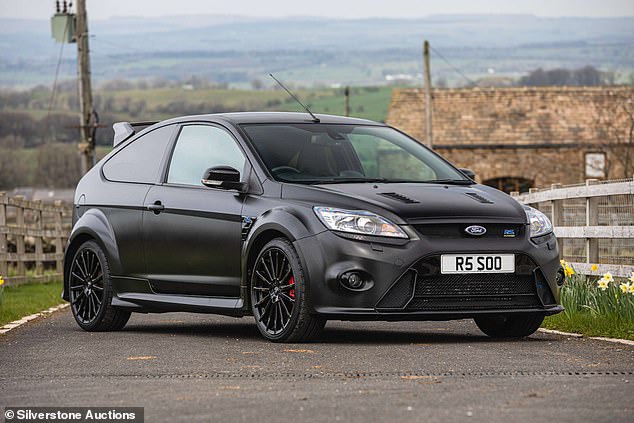 This 12-year old Ford Focus isn’t your usual family car. It is one of the 500 special edition RS500 cars created – and this is number two in the production run. It has low mileage and is expected to sell for up to £75,000