A new year means a fresh batch of new cars hitting showrooms – and 2023 will be no different as brands look to tempt customers into their dealerships with a range of fresh, flashy models.

We already know about quite a few of the different motors hitting the road for the first time in 2023. So we’ve chosen our 23 favourites that we think will be of big interest to British drivers.

Part one of our two part preview looks at new vehicles from Audi to Kia.

Check back tomorrow when we will cover the remaining new 2023 motors from Mercedes-Benz to Volkswagen.

With Audi looking to up its electric vehicle offering in 2023, the next model number to get the battery treatment will be the A6.

An e-tron version of the executive car is due to hit showrooms next year, with Audi already previewing the saloon model at the 2021 Shanghai Motor Show and more recently giving us a glimpse of what the A6 e-tron Avant estate will look like back in March.

While the production-ready model has yet to be shown, Audi has promised a range of 435 miles from a 100kW battery that can fast charge in 10 minutes to provide 186 miles of range. Performance ‘RS’ models are also likely to follow, though none will be what you might describe as ‘cheap’, with prices expected to start at around £50,000 to £55,000. 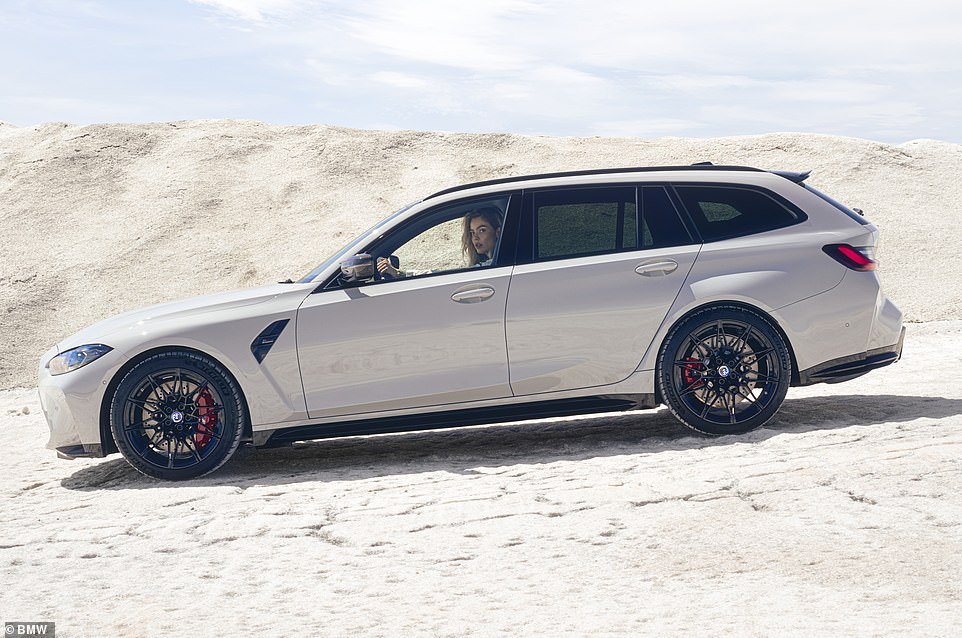 For the first time in its 37-year history, customers can now order an official BMW M3 Touring. First deliveries of the hot estate model are due in the UK early in 2023

Petrol heads have been asking for it for years… and in 2023 BMW will deliver an official M3 Touring estate. The car was unveiled at the Goodwood Festival of Speed in the summer, with UK deliveries slated to start early in the year.

For a family estate with a massive 500-litre boot, the performance figures are pretty astounding – acceleration to 62mph from a standstill takes a mere 3.6 seconds and the top speed is electronically restricted to 155mph.

However, pay an extra £2,095 for the ‘M Driver Package’ and you can derestrict it for use on track, increasing the top speed to 174mph. There’s even a ‘drift analyser’ that rates your power-sliding abilities. 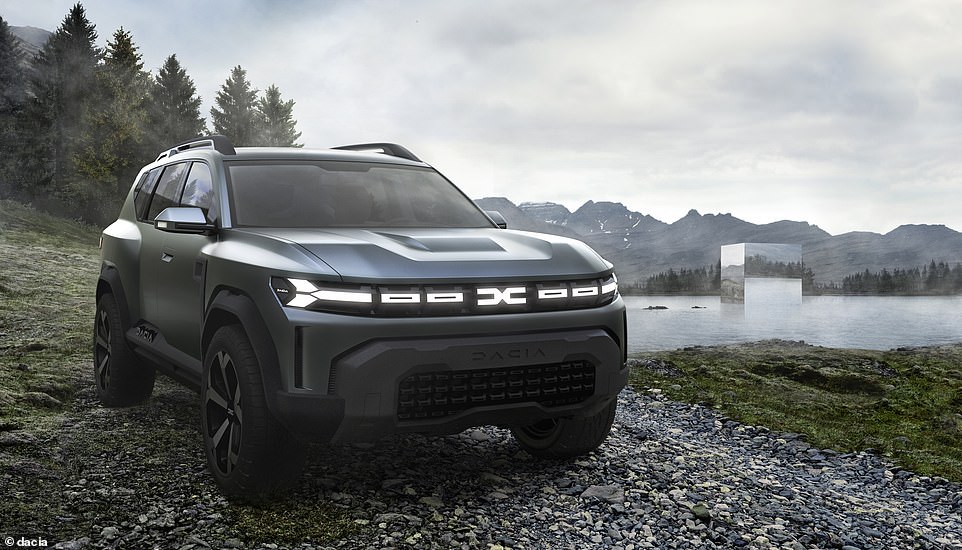 Dacia is expected to unveil the production-ready Bigster soon – and if the 2021 concept vehicle is anything to go by, it will become its most stylish model yet. Likely to cost in the region of £20k, it should be a hit among UK buyers

Dacia’s all-new SUV isn’t a car you will likely be able to buy in 2023, but it is one we could get to see in full-production form before the end of next year.

At 4.6 metres long, it will be become the biggest model in Dacia’s range of affordable vehicles. Yet the larger proportions shouldn’t see the Romanian marque ditch its pricing towards smaller budgets, with the SUV expected to ring in at around £20,000.

It will come with a petrol engine – which will be the case until new cars with combustion engines are outlawed in the UK in 2030 – and could also be sold with a plug-in hybrid option offering around 30 miles of electric-only range. A 2021 concept unveiled a boxy – though stylish – package that, if priced accordingly, could be very popular among UK buyers. 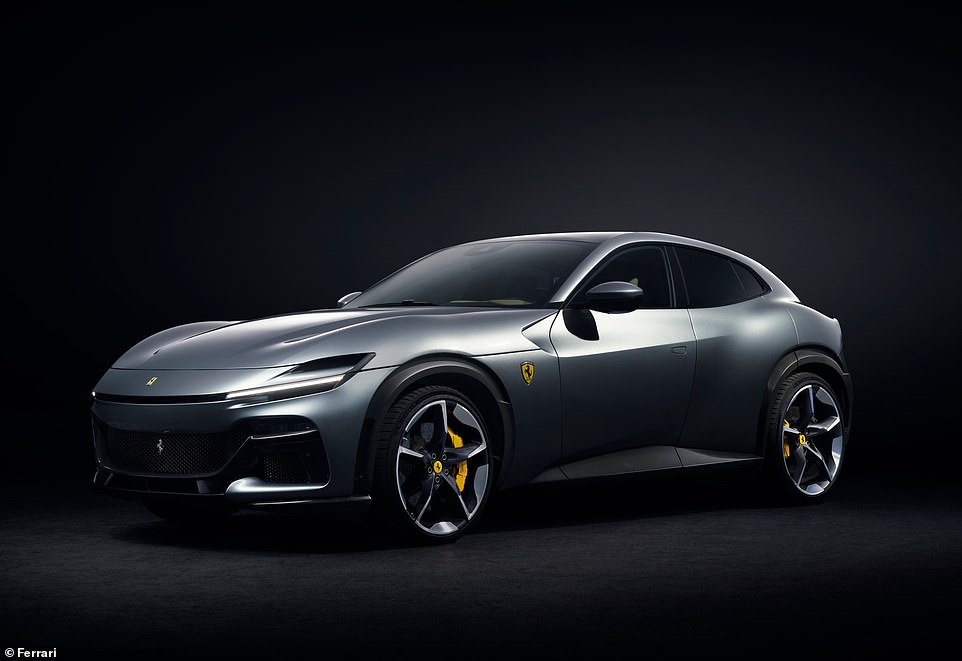 Expect this to be the most-common Ferrari on the road from next year. Orders have been flooding in for the Italian marque’s new Purosangue V12 SUV, which has seen huge demand since it was unveiled in September

It has been a long time coming but Ferrari’s Purosangue is finally a reality. Having been teased for what feels like an age, first deliveries of the new motor are due to arrive by the middle of 2023.

While it might look it, Ferrari is adamant that the Purosangue is NOT an SUV – though the high-riding, all-wheel-drive, large four-seater certainly looks like one to us.

It is set to become the most common Fezza you see on the roads, too. Despite only being unveiled in September, demand for the Purosangue has been mighty, to say the least. Already, reports say that the Italian marque has stopped taking orders, having accrued a two-year waiting list for customers looking to buy their first Ferrari. 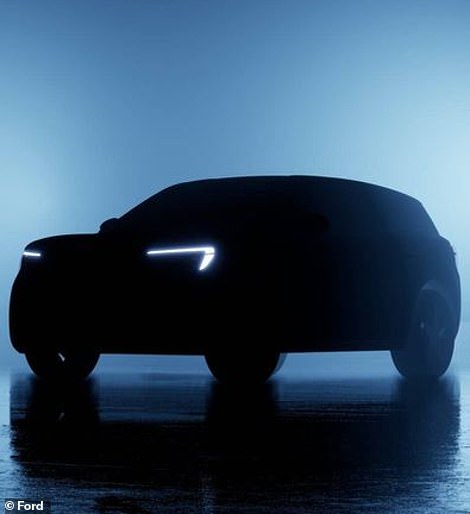 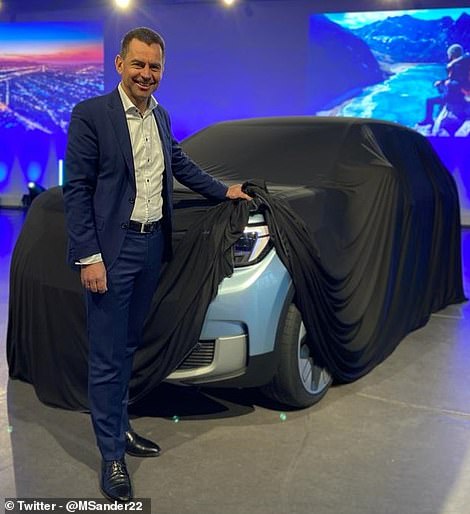 Left: Ford’s first electric car based on the VW MEB platform is due to be unveiled in March 2023. Right: Ford ‘Model e’ boss, Martin Sander, gave an early glimpse of the new electric SUV on Twitter in December

We might not know its name yet, but it has been rubberstamped that Ford will unveil a new mid-size electric SUV in March 2023. And it’s quite an important model.

It’s the first car that will come from the brand’s new partnership with Volkswagen, where Ford will use the German company’s existing electric vehicle platforms for its own battery models. In return, VW will have access to Ford’s commercial vehicle developments.

This initial example is set to be around the size of the current VW ID.4 SUV, which starts from £38,710 in the UK. Expect the Ford to be priced a little lower. So far, we’ve only seen a couple of teaser images of how it will look. It should offer a range – in top spec – of 300 miles from a full charge and sit below the Mach-E in the company’s EV line-up. 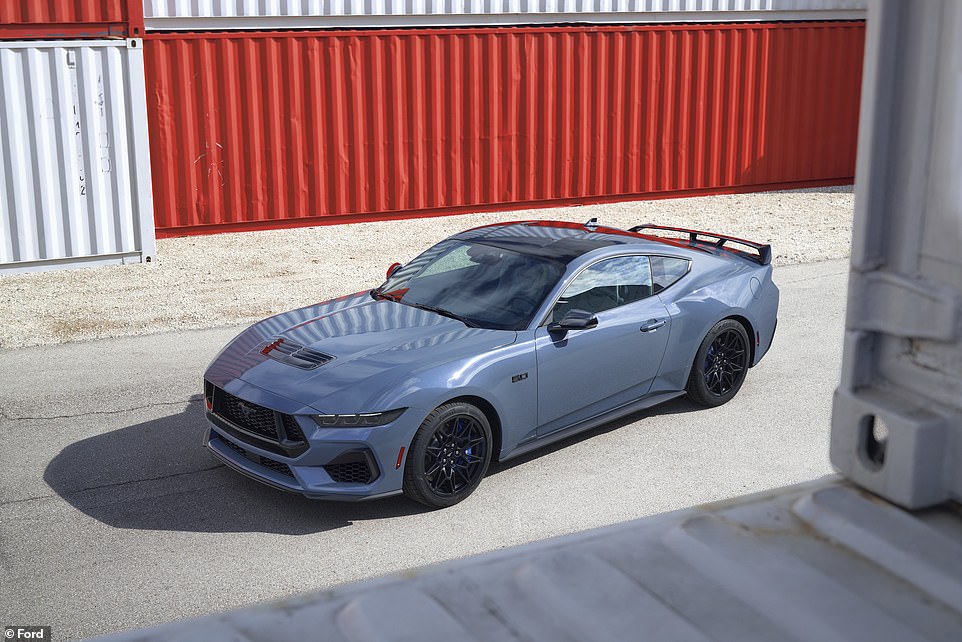 Fans of American muscle cars have something very big to look forward to in 2023. The new Ford Mustang will hit showrooms late in the year in the UK – and, importantly, it will still have a burbling 5.0-litre V8 engine under its bonnet.

Any concerns that Ford would electrify the famed pony car were quashed at its public unveiling at the Detroit Auto Show in September, with boss Jim Farley saying: ‘Investing in another generation of Mustang is a big statement at a time when many of our competitors are exiting the business of internal combustion vehicles.’

The seventh-generation Mustang is only the second iteration that will be sold as an official UK car in right-hand drive layout. And the US brand has promised that it will be the ‘most fun-to-drive Mustang ever’. 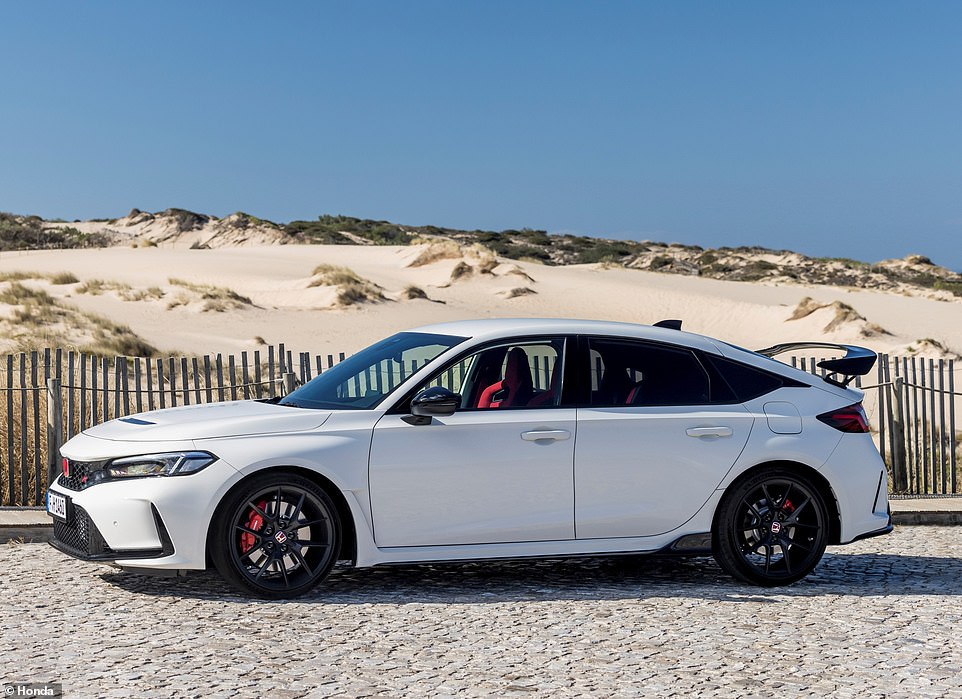 You won’t have to wait long to see the new sixth-generation Honda Civic Type R on the road. First UK deliveries are expected in January

Honda’s Civic Type R has arguably been the best hot hatch on the market for the best part of the last decade, and in 2023 there a brand-new version.

It will be the sixth generation of the souped-up family car, and it has all the ingredients to be better than ever. It gets a 2.0-litre turbocharged four-pot engine with 326bhp and stick with the tradition of coming with a short-shifting six-speed manual gearbox and front wheel drive – much to the joy of enthusiasts.

It looks like a proper hot hatchback too, with a huge rear spoiler, trio of exhaust tailpipes, big alloy wheels and sporty bucket seats inside. It won’t be cheap though, nearing £50,000. First UK deliveries are expected in January 2023. 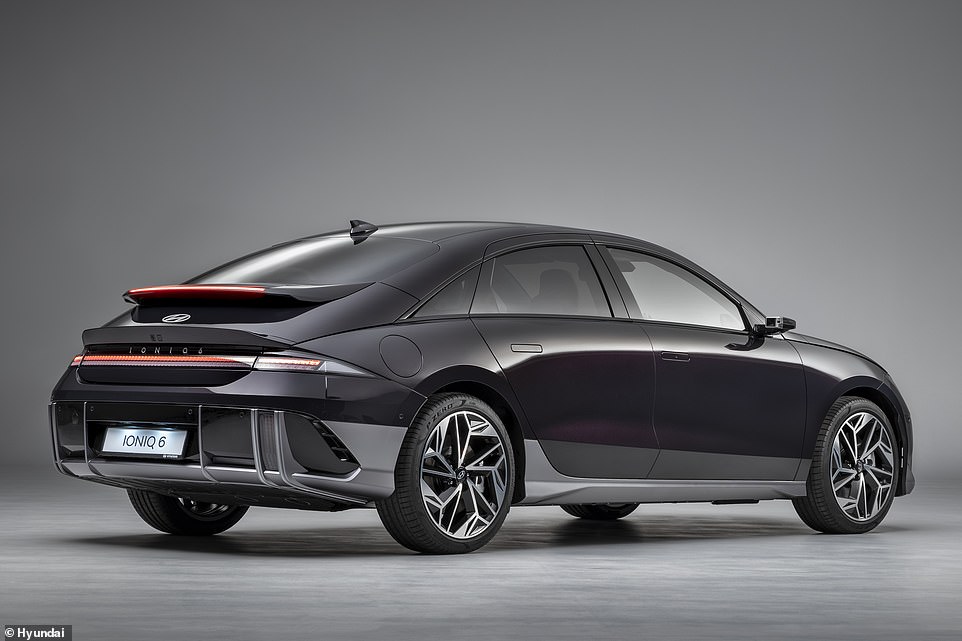 Hyundai is calling its new Ioniq 6 an ‘electric streamliner’. Its svelte body should make it very efficient at cutting through the air and help it achieve its claimed maximum driving range on a fully-charged battery, which is in excess of 320 miles

Is it a bird? Is it a plane? No, it’s an ‘electric streamliner’, according to Hyundai. The Ioniq 6 is the latest model added to its blossoming line-up of battery-powered vehicles – and it keeps with the Korean brand’s recent-era penchant for unique-looking motors.

The manufacturer says its ‘single-curved aerodynamic profile and carefully crafted contours’ have created its most slippery and aerodynamic car yet, and debuts a ‘new typology for the EV mobility era’. It certainly looks the part.

All models feature the long range 77.4 kWh battery, though the maximum driving range available is dependent on whether you choose the rear-wheel or all-wheel-drive option, with the difference being 322 and 338 miles respectively. First deliveries are due for UK customers in the early part of the year. 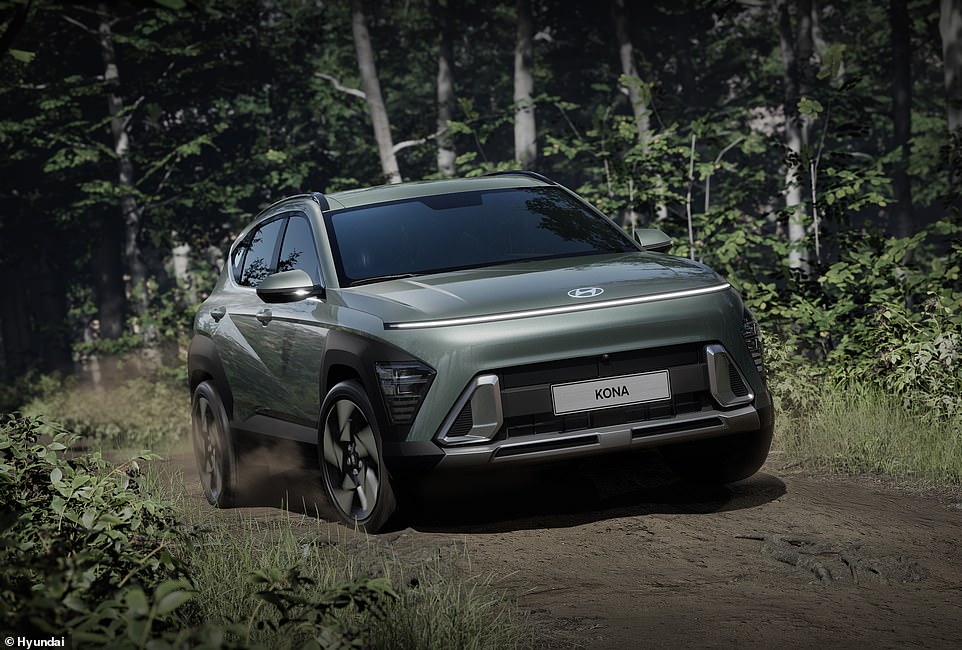 The second-generation Hyundai Kona is coming to the UK in 2023. Like its predecessor, it will be available with a choice of drivetrains: mild-hybrid petrol, full hybrid and all-electric

Hyundai’s Kona has been a huge success since it first launched in the UK in 2017. Its availability with a choice of combustion, hybrid and fully-electric drivetrains has made it a popular option.

In 2023, the second-generation car will look to build on the original’s acclaim with sharp new looks.

This includes a futuristic-looking light bar, which Hyundai is calling a ‘Seamless Horizon Lamp’ that spans across the front end, with the battery-powered car getting a pixelated version to separate it from those with a combustion engine under the bonnet.

The 2023 Kona will be slightly larger than the outgoing model – some 25mm wider and 150mm longer than the predecessor. This is part of a bid to appease family-car buyers, of which some were left wanting for more rear legroom and boot space in the Mk1 version.

Again, it will be sold with a choice of mild-hybrid petrol, full hybrid and 100 per cent electric options. 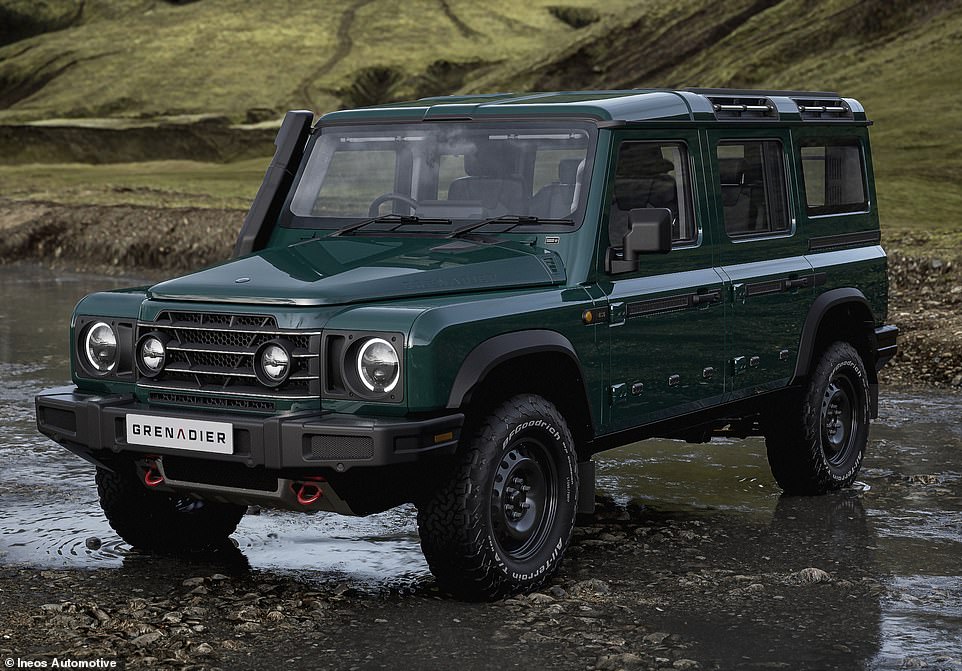 If you read our round-up of new cars coming in 2022 from 12 months ago, you will have seen Sir Jim Ratcliffe’s Ineos Grenadier 4X4 in that list too. But production delays have pushed back first deliveries to UK customers until early 2023.

Like all other car makers around the world, Ineos Automotive – the new brand formed by the petrochemicals billionaire – has been heavily affected by global supply chain issues that have crippled manufacturers since the pandemic.

While it says this will continue to ‘constrain output’, series production started at its Hambach plant on the French-German border in November, with first volume deliveries being shipped from early December.

The BMW-powered boxy 4X4 is eagerly anticipated, having been dubbed the modern successor to the previous-generation Land Rover Defender. While UK customers might have to wait a little longer to get their hands on their Grenadier, seven-time F1 champion Lewis Hamilton has recently taken one for a test drive. 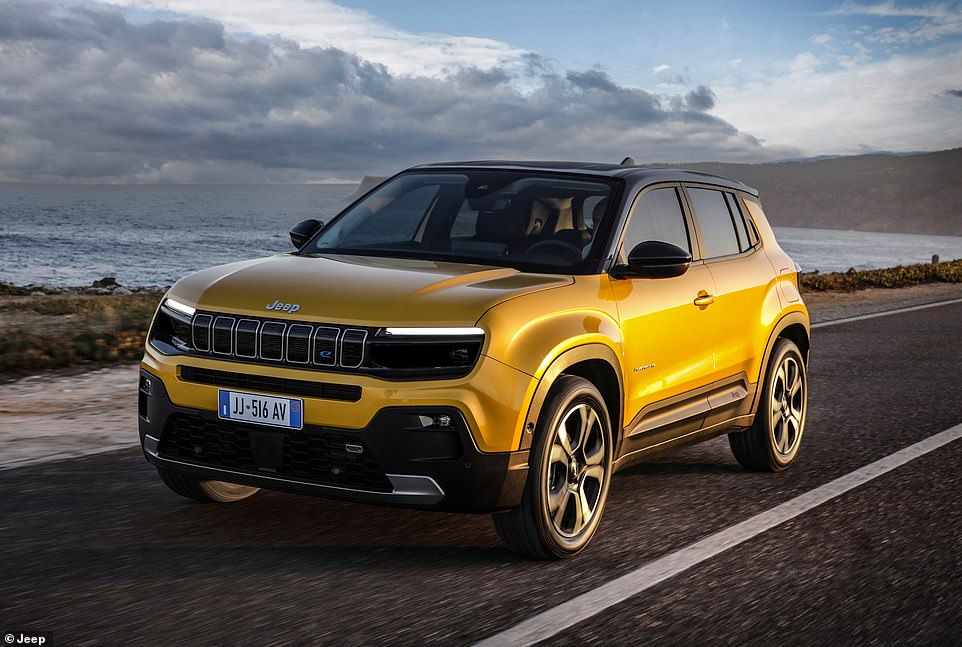 Avengers assemble! This is the new Jeep Avenger – the US brand’s first all-electric model that spearheads its switch to battery power from 2023

Jeep will begin its electric vehicle offensive in 2023 – and in some style. The Avenger SUV will be first battery-powered model from the off-road giant born during the Second World War. You can make a reservation for one today, but order books won’t officially open until prices are made concrete early in the year.

The zero-emissions Avenger will offer customers a range of 250 miles on a fully-charged battery. First UK showroom deliveries will commence at the beginning of next year, with prices expected at between £35,000 and £40,000.

The car is one of four all-electric SUVs to be launched in Europe by 2025, with Jeep bosses promising that all sales on the continent will be battery-electric vehicles by 2030. 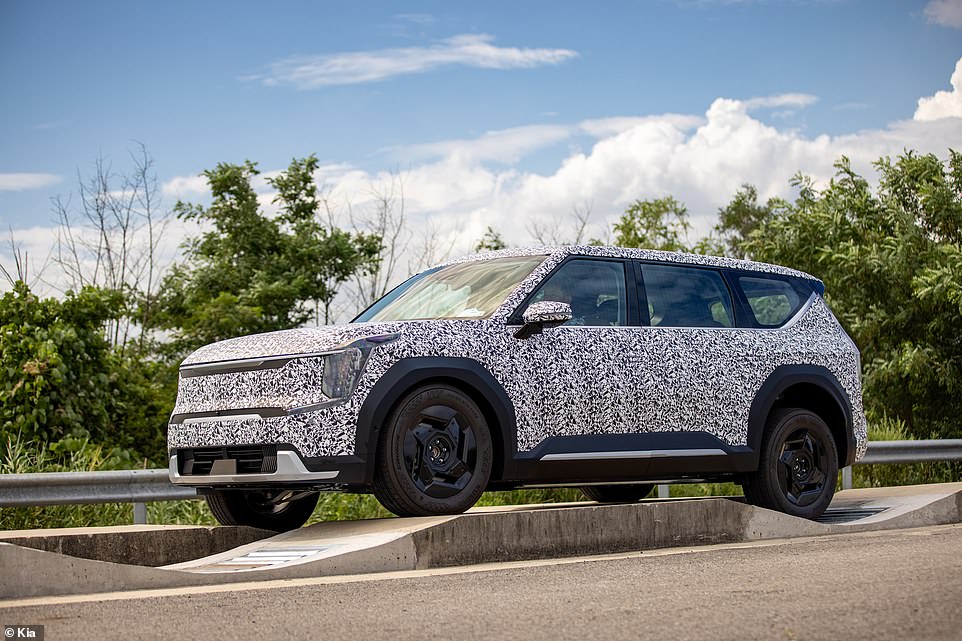 Like Korean sister brand Hyundai, Kia has been on an electric car offensive in recent years, releasing some of the best models on the market, including the EV6.

Its largest electrified model is coming in 2023 – the EV9. The company confirms it is undergoing its final phase of testing ahead of its world premiere in the first quarter of the year.

Fitted with seven seats, Kia hopes it will attract a raft of new customers, who are likely to be taken by its boxy – but stylish – looks. While not confirmed, it is reported to be getting a 100kWh battery, meaning it should offer around 400 miles of driving range between battery charges. But it won’t be cheap, with prices expected to start from £50,000-plus.