The 4 remedies for winter runny nose

One of the common cold’s most irritating effects is the toll it takes on your sinuses, in particular when it leaves you with a streaming nose.

Fortunately, there are a few methods – proven by science – which will help you to leave the tissues at home.

1. Make a cup of tea or coffee

Drinking a warm beverage can help relieve a runny nose, and provide comfort for other cold symptoms such as a sore throat.

One 2008 study in Rhinology discovered that a hot drink brought immediate relief to a variety of cold symptoms, while a drink at room temperature only soothed sneezing, a runny nose and and coughing.

The research also found that although people with cold and flu felt they had better airflow after a hot drink, despite the fact that their airflow was not actually improved.

2. Use steam to clear the nasal passage

Steam can help thin out mucus which can leave us feeling uncomfortable and constantly needing to blow our nose.

Placing your head above a steaming bowl of water can help ease symptoms of the common cold.

The Journal of Dental and Medical Sciences published a 2016 study that found participants who used steam to treat the common cold had ‘faster relief of symptoms’.

Neti pots are objects that look similar to a small teapot, and are used to rinse out the nasal passage. Users can tilt their heads and pour water carefully into one nostril, and the liquid will pass out of the other one, effectively flushing the nose out.

A 2016 Cochrane review found that irrigating a nose with a saline solution had beneficial effects, and uncommon side effects. 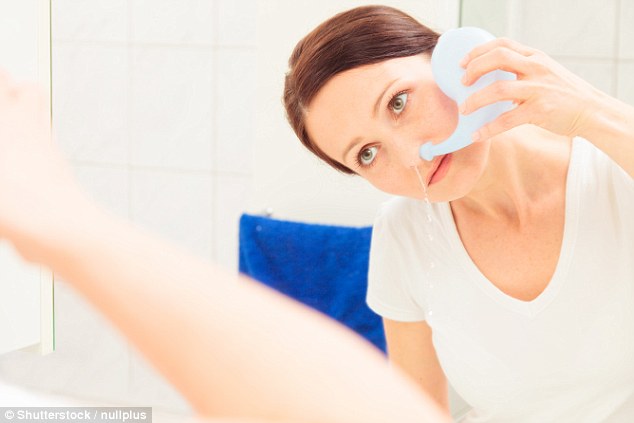 Neti pots help to flush out the nasal passage, and works by tipping water through one nostril and allowing it to flow out of the other

Although generally considered a cure for a blocked or congested nose, eating a spicy meal can help with a streaming nose – although it might make it worse first.

If you don’t like spicy food another option can be capsaicin nasal sprays, which contain the same chemical that makes chilli hot.

One 2016 review in Current Allergy and Asthma Reports claims that although the substance can cause irritation, symptoms improve afterwards.

A 2015 Cochrane review found that capsaicin helped with the overall effects of a cold.