The app that can tell you when you’ll die

Predicting death has long been a fascination for mankind, and now a new app promises to narrow the end of your life down to the nearest 36.5 days.

Experts in Russia designed a free app dubbed Gero, which uses AI to analyse activity data from your phone accelerometer to estimate your lifespan within a tenth of a year.

When combined with information recorded by wearable fitness monitors, this prediction becomes even more precise.

The estimate will even be revised downwards if you don’t keep up with your healthy living routines, hopefully adding an incentive to stick to them.

Exactly when we shuffle off this mortal coil has long been a fascination for mankind and a new app promises to narrow this down to the nearest 36.5 days. The software uses AI to analyse activity data from your phone or smartwatch to estimate your lifespan within a tenth of a year

The app is the work of reserachersthe Moscow Institute of Physics and Technology are behind the app.

They analysed physical activity records and clinical data from the 2003 to 2006 US National Health and Nutrition Examination Survey (NHANES).

A neural network was then trained with the results to predict the biological age and mortality risk of volunteers using a week long stream of activity measurements.

The recent introduction of affordable fitness wearables means individuals now have access to their own measurements.

This tracking is already done without interfering with the daily routines of hundreds of millions of people all over the world.

Using the AI’s knowledge from NHANES, the app is able to analyse activity data from such wearables or a smatphone’s built-in accelerometer.

In a written statement, Dr Peter Fedichev said: ‘Artificial intelligence is a powerful tool in pattern recognition and has demonstrated outstanding performance in visual object identification, speech recognition and other fields. 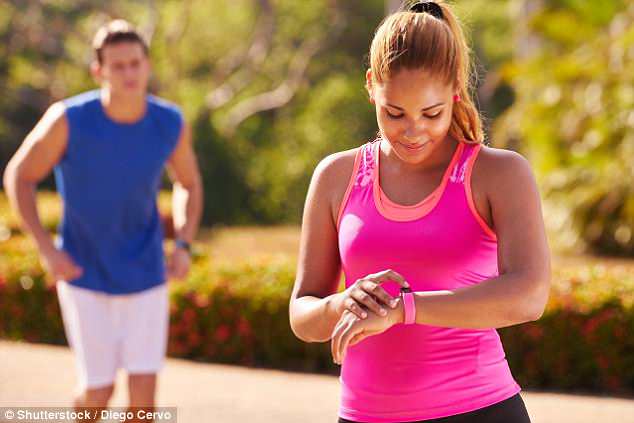 When combined with information recorded by wearable fitness monitors, this prediction becomes even more precise 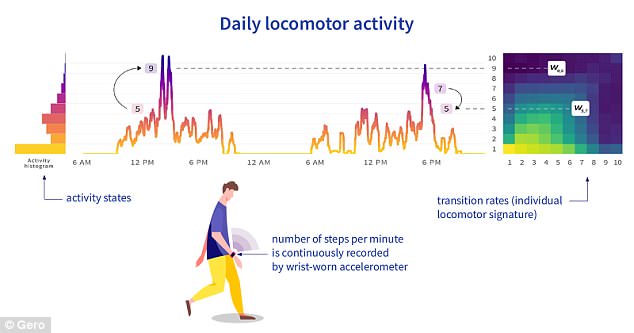 The estimate will even be revised downwards if you don’t keep up with your healthy living routines, hopefully adding an incentive to stick to them

‘Inspired by these examples, we explored AI potential for Health Risks Assessment based on human physical activity.

‘Life and health insurance programs have already begun to provide discounts to their users based on physical activity monitored by fitness wristbands. We report that AI can be used to further refine the risks models.’

MailOnline decided to put the beta version of the app, which currently only works on iPhones, to the test on members of staff.

Our first volunteer, MailOnline senior health reporter Stephen Matthews, who scored 69.2, said: ‘I was utterly shocked to discover I’ll die before I reach 70, if this app proves true. 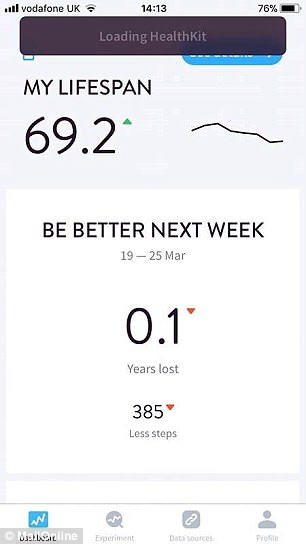 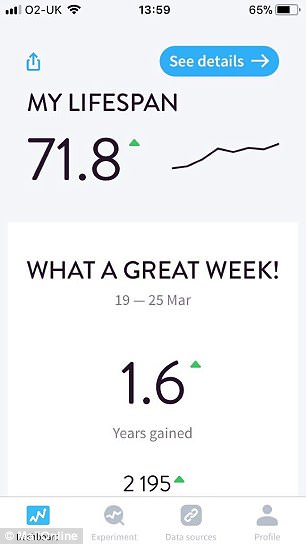 MailOnline decided to put the beta testing version of the app, which is currently only available on iPhones, to the test on members of staff. Senior health reporter Stephen Matthews scored 69.2 (left). Science reporter Joe Pinkstone scored 71.8 (right) 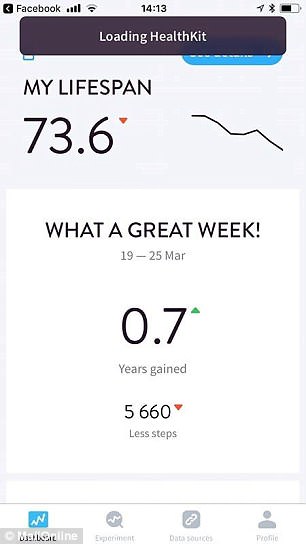 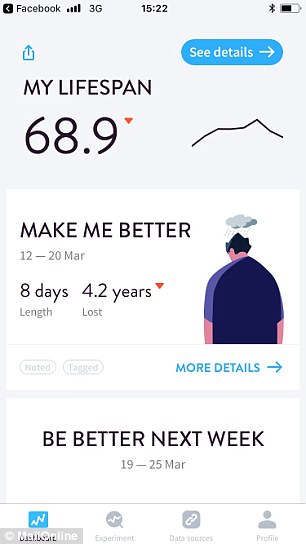 Health reporter Alexandra Thompson, who received the highest score of 73.6 (left) is a regular runner and eats healthily. Freelance reporter Jack Flanagan, who scored the lowest at 68.9, questioned his result

‘I live an unhealthy lifestyle, full of junk food, booze, late nights and work a stressful job – so the app probably isn’t too far off the truth.’

Science and Technology reporter Joe Pinkstone, who scored 71.8, added: ‘The prediction from the app that I’ll make it to more than 70 years old was a pleasant one.

‘With a diet that has definite room for improvement and a gym schedule that’s whimsical at best, I can now make informed decisions about my activity and the long-term impact these choices make.

‘I struggle to believe that it can account for the many external factors involved in life expectancy, but as a baseline for general well-being I believe it has its uses.’

Health reporter Alexandra Thompson, who scored the highest at 73.6 said; ‘I’m not happy with result! I run 5k three times a week, I’m a non smoker and healthy eater, although I do drink red wine.’

Freelance reporter Jack Flanagan, who scored the lowest at 68.9, added; ‘In my go with it, it didn’t take into account my weight or sleep patterns – so that could’ve improved my score.

‘My family also tend to have long lives, so that might’ve also impacted the results if it’d be a incorporated.

‘Also, I’d expect healthcare to be a lot better by then… I wonder if that’s been factored in?’

WHAT FEATURES DOES THE APPLE SERIES 3 WATCH HAVE?

The $399 (£399) device allows users to make calls directly from their wrist, much like the previous versions – but, with an integrated SIM card and a display that ‘becomes the antenna,’ you can now do so without having a phone nearby.

The watch has exercise features, a faster dual-core processor, and 18-hour battery life, making it the firm’s most powerful smartwatch yet.

The display itself works as a transmitting and receiving element for 4G LTE and UMTS, meaning it becomes the antenna.

And, the built-in eSIM is just over one-hundredth the size of a traditional SIM card, according to Apple.

This allows for over-the-air activation in the compact design.

Pre-orders for the Series 3 Apple Watch began on 15 September and it became available on 22 September.

It’s equipped with intelligent coaching features, water resistance up to 50 meters, and a new barometric altimeter that measures relative elevation.

These things, coupled with the cellular connectivity, give people a new sense of ‘freedom’ according to the firm.

The Series 3 watch is available in silver and space grey aluminium, along with the new gold aluminium.