A finalist of the hit reality show The Bachelor was left in tears after strangers mistook her baby’s port wine stain for measles.

Shawntel Newton was stunned when her son Leo was born with a dark purple mark across the left side of his face, as well as a smaller patch on his right cheek.

Ms Newton, who made it to the final four of The Bachelor in 2010, has since learnt her now six-month-old has Sturge-Weber syndrome, which causes abnormal blood vessels to develop in the skin.

The youngster, who is also at risk of seizures, had his first laser treatment at just five days old and requires medication to prevent fits that may lead to a stroke.

The 33-year-old, who lives in Granite Bay, California, has revealed how she has been left upset from people staring at her son’s birthmark. 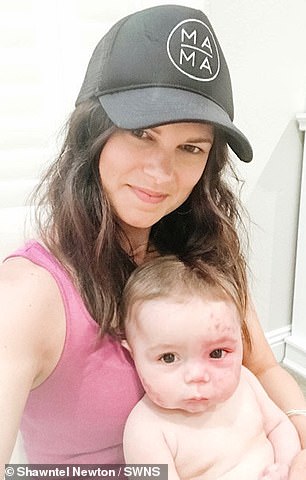 Shawntel Newton, who was a finalist on the show The Bachelor (pictured left in a promotional shot), was left in tears after strangers mistook her baby’s port wine stain for measles. Her son Leo (pictured together right) was born with a purple mark across the left side of his face 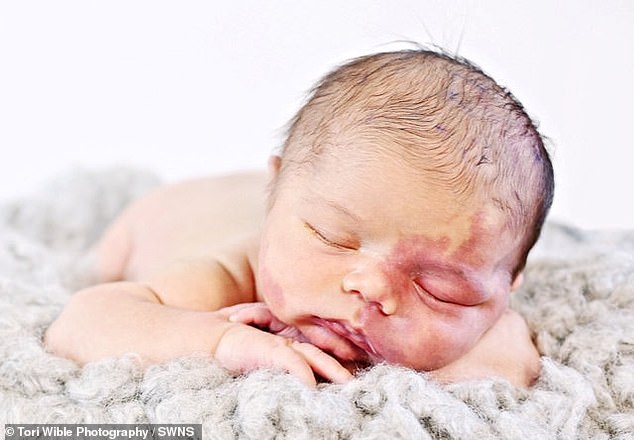 Pictured as a newborn, Leo has Sturge-Weber Syndrome, which causes abnormal blood vessels to develop in the skin, and also puts him at risk of developmental delay and seizures 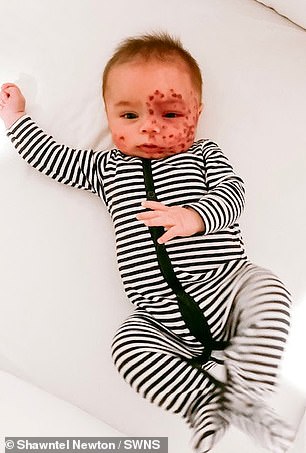 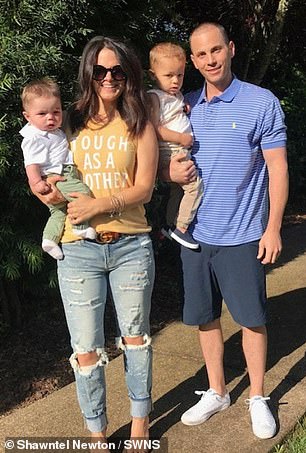 Leo has red blotches over the left side of his face and a smaller patch on his right cheek (seen left). He is pictured right with his mother, father Paolo Poidmore and brother Anthony, two

Speaking of her son’s condition, Ms Newton said: ‘It can be a struggle when I am out with Leo after he has had laser treatment and people will stare and wonder what is on his face.

‘The treatment makes his birthmark darker and there are red blotches on his face. One time I had someone ask me if he had the measles. I cried after that comment.

‘I try and understand that to most people he does look a little different but it’s hard on a mummy’s heart to hear things like that.’

Ms Newton, who is also mother to two-year-old Anthony, gave birth to Leo via a scheduled C-section on October 18.

The reality star did well on The Bachelor with the season’s love interest Brad Womack, but has since married Paolo Poidmore, a 38-year-old orthodontist.

Speaking of Leo’s birth, she said: ‘I heard the doctor say: “Oh my gosh, he has a very large birthmark on his face”.

‘I couldn’t see him but my husband looked a little shocked. The nurses said it was a bruise.

‘When they brought him over to me, half of his face was very purple. On the other side of his cheek there was another little patch.

‘In my medicated and exhausted state, I didn’t know how to process it.’ 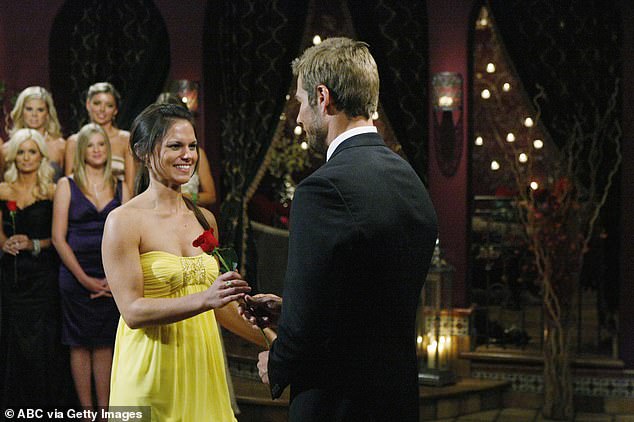 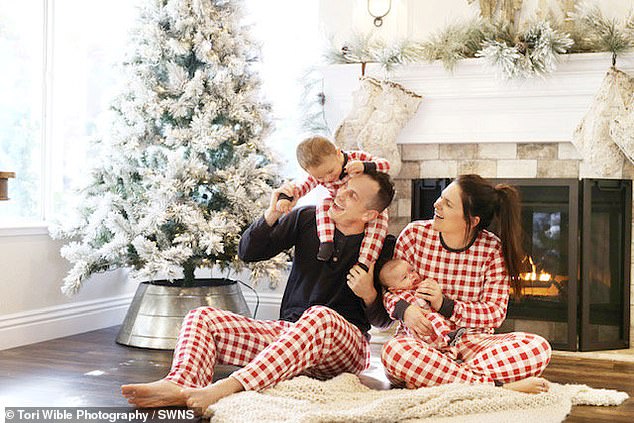 Leo was diagnosed with Sturge-Weber syndrome at just a few months old. This disorder can lead to developmental delays and glaucoma, which can result in blindness.

‘The pediatrician told us to get specialists involved, and that our main concerns should be Leo’s skin, eye and brain,’ Ms Newton said.

‘I felt really robbed of the newborn stage when you just want to be at home, breastfeeding, snuggling and connecting with your baby.

‘Instead my husband was on the phone making call after call, finding a neurologist, ophthalmologist and dermatologist.’

Leo had his first appointment with a dermatologist at just five days old. ‘They advised we start laser treatment immediately and he had his first session that day,’ Ms Newton said.

‘They kept encouraging me he was young and resilient and he wasn’t going to remember the session – now was the time to treat him.’ 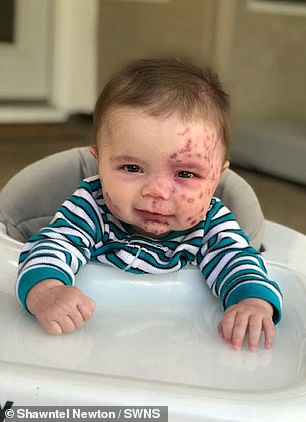 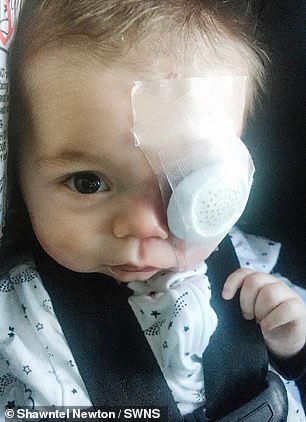 Leo (left) was diagnosed with Sturge-Weber syndrome at just a few months old. He was then forced to endure preventative eye surgery. Pictured right after the operation, the procedure was necessary due to his syndrome putting him at a higher risk of glaucoma 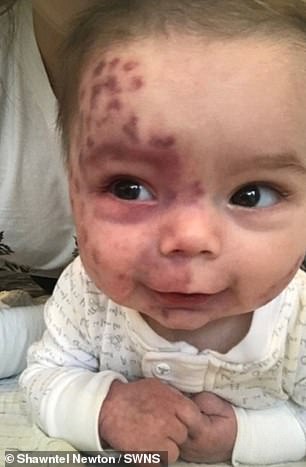 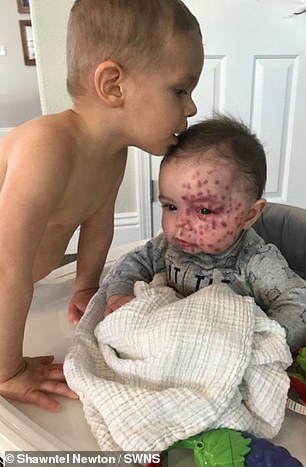 Leo (left) ‘amazes’ his parents with his ‘resilience’. He is pictured right with his brother

Despite being exhausted from her recent C-section, Ms Newton attended her son’s appointments but was advised it would be too upsetting for her to be in the room during his laser treatment.

‘I gave him a blanket and the nurses swaddled him,’ she said. ‘They put a little eye shield over his eyes.

‘There are five people in the room who hold him down while the laser zaps his skin. I hid in the bathroom and turned on the faucet as I hate to hear his cries.

‘Afterwards, I fed him and he was fine.’

Ms Newton accepts her son’s birthmark will never completely fade but hopes the laser therapy will lighten it. ‘We will continue going until he is at least a year old,’ she said. 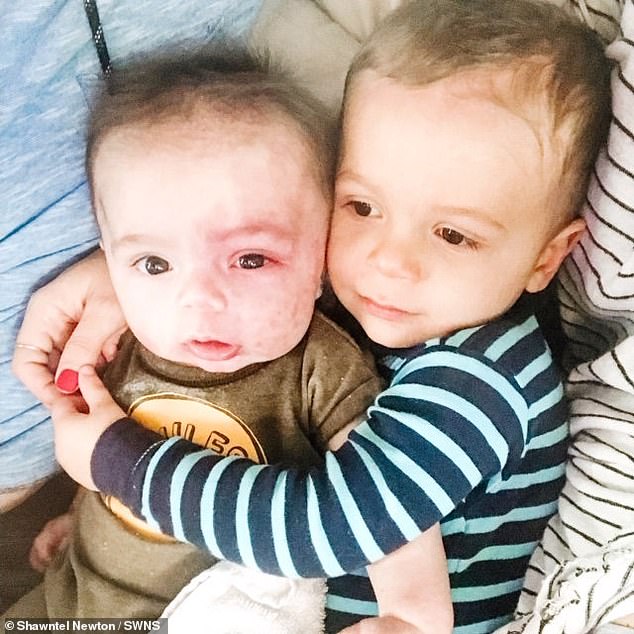 The brothers (pictured together) already have a close bond

Leo, who endured preventative eye surgery at just a few months old, may also be at risk of brain abnormalities.

His parents therefore met with a neurologist not long after he was born. ‘That was probably one of the most important appointments,’ Ms Newton said.

‘Leo had EEGs, which showed some abnormal activity in his brain although not necessarily seizures. He had an MRI when he was only a few months old.’

Leo has been on anti-seizure medication since he was diagnosed.

‘We had a really hard time trying to come to terms with putting our three-month-old on medication because we couldn’t see that he was having any seizures,’ Ms Newton said.

‘But we felt if we didn’t we wouldn’t be able to forgive ourselves if he had a stroke.’ 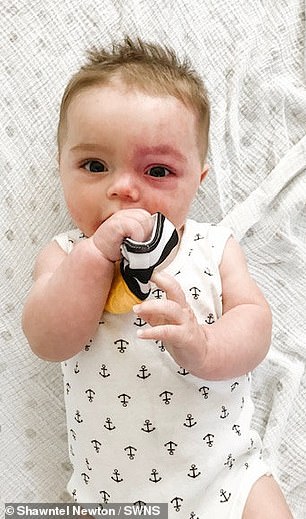 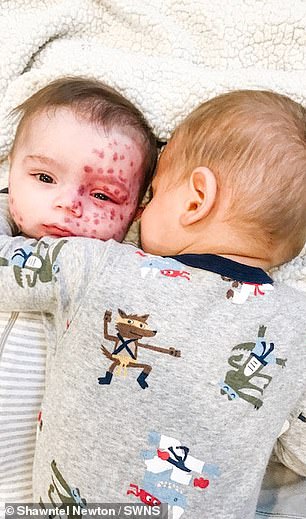 Leo’s mother worries how his birthmark (seen left) will affect the rest of his life and did not initially tell her friends about his port wine stain when he was born. But the family are determined the youngster (pictured right with his brother) will ‘rock that birthmark’ 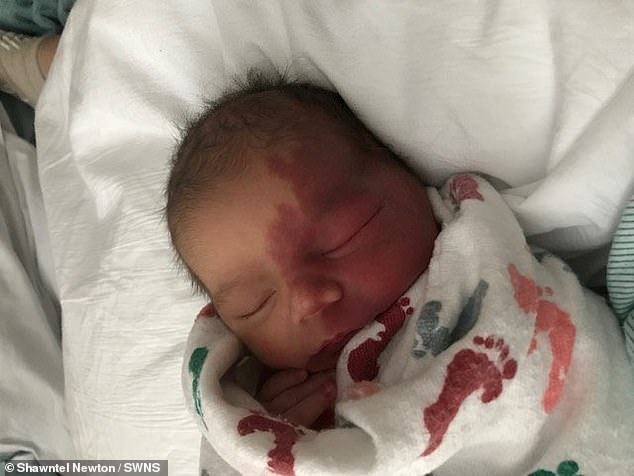 WHAT IS A PORT WINE STAIN?

A port wine stain is a birthmark caused by the overdevelopment of blood vessels underneath the skin.

The change in the blood vessels is caused by a genetic mutation which occurs before a child is born, and will remain for the rest of a person’s life – though the severity of them differs between people.

Port wine stains begin as a flat red or purple mark and, over time, can become more raised, bulkier and darker in colour.

They can occur anywhere on the body but 65 per cent of them appear on a person’s head or neck.

Around three in every 1,000 babies has a port wine stain and they are more common in girls than in boys, though the reason for this is not known.

Treatment usually involves laser treatment to remove some of the dark colour from the mark, or camouflaging the discolouring using a special type of make-up.

Ms Newton admits it took her a while to come to terms with her son’s birthmark and initially feared what his life would be like.

‘When he was first born, I didn’t text all my friends a picture of him,’ she said. ‘I was processing so much, it took me time to come to terms with what had happened.

‘When he was just two days old, it was one o’clock in the morning and I was trying to breastfeed him and these thoughts flooded my head. “Are people going to make fun of my child? What’s going to happen when he goes to school?”.

Amid her concerns, Ms Newton posted a moving message about the ordeal on Instagram and was amazed by the outpouring of support.

‘The next day I started receiving so many emails from other parents with children with port wine stain,’ she said.

‘Now there’s over 44,000 people following along with his journey when before he was born I had 4,000 followers.

‘I was on The Bachelor so there was some interest in me already but Leo is the one they want to hear about now. The support we’ve received is crazy.

‘We get packages from strangers and we even received a painting of a beautiful lion’s face and half of the lion had red dots.

‘Now we call our son Leo the Lion because of his strength and bravery. I believe he is going to do great things. He is such a happy baby.’

Despite everything her son has endured, Ms Newton insists the youngster is ‘always’ smiling.

‘He’s not fussy, with everything he goes through I’m amazed how resilient he is,’ she said.

‘We are hoping to instill confidence in him because obviously his face does look different. But I know he is going to rock that birthmark.’ 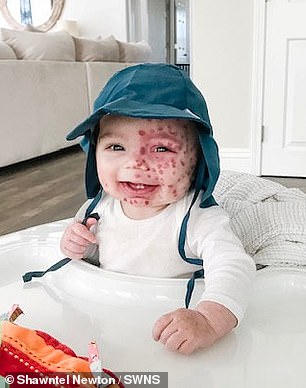 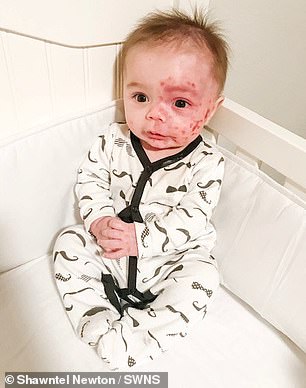 Despite everything her son has endured, Ms Newton insists the youngster (pictured left and right) is ‘always’ smiling. His parents call him Leo The Lion due to his ‘strength and bravery’

WHAT IS STURGE-WEBER SYNDROME?

Sturge-Weber syndrome is a rare disorder present at birth. It’s characterized by a port-wine stain on the face and brain or eye abnormalities.

While some children don’t have any neurological symptoms of the disorder, others have severe developmental delays and seizures.

The disorder is not believed to be genetically inherited.

The total number of people with Sturge-Weber syndrome is unknown since many never receive a diagnosis. Estimates range between one in 40,000 and one in 400,000.

This is the most apparent indication of the syndrome. It’s present at birth and typically involves at least one upper eyelid and the forehead.

The birthmark, varying from light pink to deep purple, is due to an overabundance of capillaries – the smallest blood vessels in the body – just beneath the skin.

In rare instances, there is an absence of this birthmark.

There is often excessive blood vessel growth on the surface of the brain (angiomas), located in the back region and on the same side as the port wine birthmark.

These angiomas create abnormal conditions for brain function in the region with seizure activity being the most common.

Developmental delay of motor and cognitive skills may also occur to varying degrees.

This increased pressure within the eye is another condition which can be present at birth or develop later.

The incidence of glaucoma in patients with Sturge-Weber is approximately 70 percent.

The glaucoma is usually restricted to the eye which has the stain involvement.

The treatment for Sturge-Weber syndrome depends on the type of symptoms the child may be experiencing. It may consist of medications to treat seizures, surgery to treat eye problems, or therapy to treat developmental delays.