The Balmoral is the height of luxury. So how did they cope in lockdown?

The Balmoral, the grande dame of Edinburgh hotels, has dominated Princes Street for more than a century and acted as a magnet for the great and good. But luxury doesn’t come cheap – a stay in the five-star hotel’s Glamis Suite costs around £3,000 a night, while a cocktail made with vintage whisky could set you back £700.

Like every other British hotel in the pandemic, The Balmoral has suffered, as revealed in new Channel 5 show The Balmoral: An Extraordinary Year.

When filming started in early March 2020 it was business as usual for staff and guests in the hotel’s 167 rooms, 20 suites and three eateries, including a Michelin-starred restaurant.

In the months that followed, though, lockdown forced it to shut its doors and staff were furloughed, then it reopened to huge relief before being closed again, and the four-part series follows staff throughout the tumultuous year.

Owned by Sir Rocco Forte, The Balmoral’s emphasis on luxury has lured everyone from Paul McCartney to Elizabeth Taylor.

JK Rowling booked herself in for six months in 2006 to finish writing Harry Potter And The Deathly Hallows, and Room 552 has been renamed The JK Rowling Suite in her honour. Serving the elite means resident manager Rob Van Eyck is always on his toes, prepared to field extraordinary requests.

‘We had a famous artist in the hotel a few years ago who requested that we ask the council to stop the daily one o’clock gun salute at Edinburgh Castle because he wanted a nap,’ recalls Rob, 38. ‘It’s been fired for the past 150 years, so unfortunately we were unable to do that.’

But front-of-house staff regularly go all out to satisfy guests’ desires. In the first episode the concierge is tasked with sourcing special boot studs for one of the France national rugby team, which had taken over 110 rooms in the hotel for a match with Scotland during the Six Nations Championship.

‘Whether it’s finding guests a unique snack or getting them tickets to a sold-out sporting event, we can do it,’ says Rob.

Going all out is a hallmark of The Balmoral. Executive housekeeper Vicky Simpson explains that remembering guests’ peccadilloes is what sets the hotel apart. 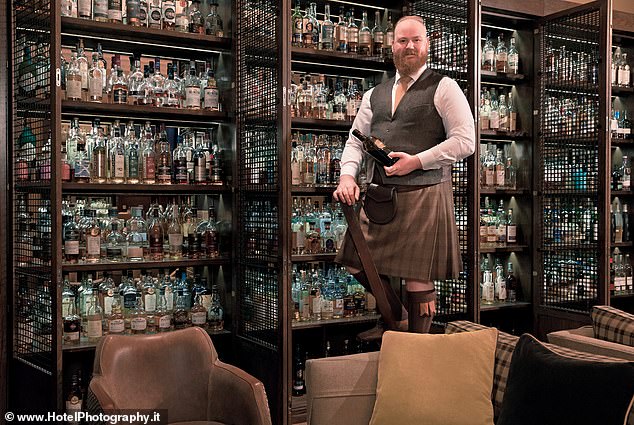 The Balmoral was renamed in 1991 after a £23m refurbishment. Pictured: The Scotch bar has over 500 whiskies

‘We’ve had guests ask for eight mattress toppers because they need their bed very soft,’ says Vicky, 37. ‘The next time they come we remember so they don’t have to ask twice.’

They offer a pillow menu in case guests want to drift off on a cushion spritzed with soothing lavender, as well as a turn-down service timed to perfection.

‘We also prepare the rooms for marriage proposals, so we can write very long sentences in rose petals.’

And the red carpet is not rolled out solely for human guests. While making the series, Rob welcomed a canine A-lister to the hotel – Instagram star Mildred the sausage dog, who has 60,000 followers.

‘I have a French bulldog, so I love it when we get doggy guests,’ says Rob. ‘With more UK-based guests now we’re getting a lot more people bringing dogs.’ The Balmoral, which opened as the North British Station Hotel in 1895 but changed its name in 1991 after a £23m refurbishment, emphasises its Scottish heritage. The Scotch bar stocks over 500 whiskies and chefs source the finest Scottish food, from seaweed to cheese.

It’s also famed for afternoon tea in the Palm Court, a heavenly glass-domed room in which guests are serenaded by harp as they enjoy sumptuous cakes and teas including the oddly named Emperor’s Golden Eyebrow.

The first lockdown last March hit the hotel hard. Rob was one of a team of four who moved into The Balmoral with his wife (and French bulldog) to monitor the building. ‘It was very odd to be watching daytime TV in the reception area,’ he says.

Vicky used the extra time to get out the dusters. ‘We gave the hotel the spring clean of its life,’ she says. ‘We started at the top and worked our way down to the basement.’ 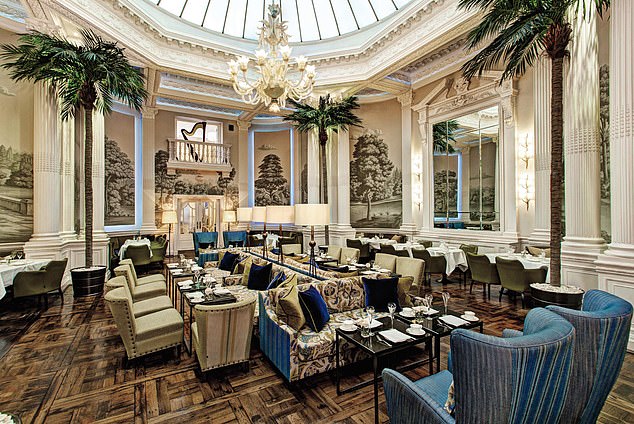 Executive chef Gary Robinson, said staff at The Balmoral have been battered and bruised but they’re lucky to be the custodians of the hotel. Pictured: The Palm Court set for afternoon tea

The hotel was allowed to reopen last summer under strict Covid protocols. Staff were dismayed when another lockdown began on Boxing Day last year in Scotland.

The series closes on Christmas Day with chef Mark Donald clearing out the fridges. ‘To prevent food going to waste we juiced everything; we turned it into vinegars and kombuchas,’ he says.

The hotel reopened again last month, but the staff won’t forget the extraordinary year of 2020.

‘We’ve come out of it battered and bruised but we’re lucky to be the custodians of this beautiful hotel,’ says executive chef Gary Robinson.

‘So many of us went on that journey together, so many of us stuck with it, and I’m so proud of everyone who did.’

The Balmoral: An Extraordinary Year is coming soon to Channel 5.