The ‘bargain’ holiday offers that are nothing of the sort

Travel firms are fooling people into paying hundreds of pounds over the odds for holidays, it is claimed.

An investigation by Which? Travel has found that companies use fake ‘hurry deals’ to pressure people into making bookings.

Some may be breaking the law with adverts portraying a deal as a time-limited bargain when it isn’t.

The consumer group tracked the deals promoted by brands such as Lastminute.com, Expedia, Virgin and the Sandals resorts in the Caribbean over three weeks in July and August.

Psychological tricks used by travel websites to sell expensive hotels, flights and insurance do have an effect, research found

It found the promoted offers were available for the same price or cheaper after the deal had ended in 16 out of 30 cases.

Which? has reported its findings to Trading Standards and the Advertising Standards Authority to investigate whether the firms have broken advertising codes or the law.

Academics from University College London (UCL) have found that the psychological tricks used by travel websites to sell expensive hotels, flights and insurance do have an effect.

They looked at the impact of messages on websites, such as ‘Hurry only 3 seats left’; ’12 other people are looking at this’ or ’40 people who have already booked this’.

Research conducted by Dr Joe Gladstone involved online experiments with 1,251 people who were split into groups and tested on their reaction to website deals on flights, hotels and travel insurance.

The message ‘Hurry only 3 seats left’ on a site led to a 4.7 per cent increase in bookings compared to no message.

There was a 9.4 per cent rise in bookings after the message ’12 other people are looking at this’ flashed up, and a 13.8 per cent increase when the message read ’40 people have already booked this’. 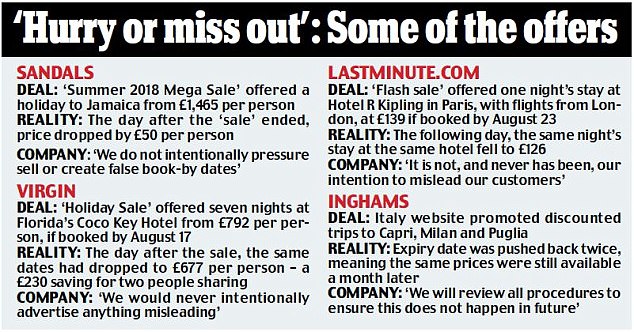 The marketing tricks tap into ‘social proofing’, which is effectively taking advantage of people’s herd mentality.

Dr Gladstone said while the human instinct to follow the herd was understandable, people can end up paying more than if they genuinely shopped around.

He said: ‘Copying the herd helps us make quick decisions, and can be a very sensible thing to do if we do not have time to make an independent decision under pressure.

‘But these ways of thinking can sometimes lead us astray – or allow us to be led astray. Consumers are bombarded with these kinds of marketing tactics every time we go on line, and the study clearly shows that they work.’

The editor of Which? Travel, Rory Boland, said: ‘Most of the time-limited deals we looked at are nothing of the sort. The tight deadlines, emotive language and countdown clocks are all designed to rush us into making a decision, but it might not be the right one.

‘Don’t be fooled – compare prices with other holiday companies.’