The battle for YouTube: Pewdiepie reclaims top spot on the site

The battle for YouTube: Pewdiepie reclaims top spot on the site after briefly losing his crown to Bollywood sensation T-Series following SIX YEARS at the top

Pewdiepie is in a desperate battle to stay afloat as YouTube’s most popular channel.

Earlier today he was forced of his pedestal and into second spot behind T-Series, a Bollywood production company.

This marked the first time in six years the Swedish phenom had not been atop the YouTube mountain and was swiftly rectified following a push from his dedicated fans to regain top spot.

Both channels boast approximately 90 million subscribers, but T-Series gained a narrow lead before again being leapfrogged.

PewDiePie (pictured) has the most subscribed to channel on YouTube. Earlier today he was forced of his pedestal and into second spot behind T-Series, a Bollywood production company. His army of loyal fans then flocked to his aid and helped him regain top spot

The usurping of Pewdiepie, real name Felix Kjellbergone, was expected for October last year but his devoted fans continued to keep him in the number one spot.

Pewdiepie, as with many influencers on the video platform, has not been without controversy during his reign.

In January hackers seized control of more than 70,000 ChromeCast devices and beamed a one minute long video of PewDiePie to the screens of their unsuspecting victims.

The attack exploited a weakness in internet router settings which makes connected devices, such as Chromecasts, publicly viewable on the internet.

The two hackers, who call themselves HackerGiraffe and j3ws3r, displayed a message on affected TV screens telling users their device had been taken over.

He was also referenced in a video of a mass shooting at a mosque in New Zealand.

The Australian terrorist who livestreamed a mass shooting at a mosque in New Zealand told his viewers to ‘subscribe to PewDiePie’ before launching his attack.

A video shot by the gunman, who identified himself as Brenton Tarrant from Grafton, New South Wales, Australia, shows him mentioning the Swedish YouTube star moments before the massacre at the Al Noor Mosque in Christchurch. 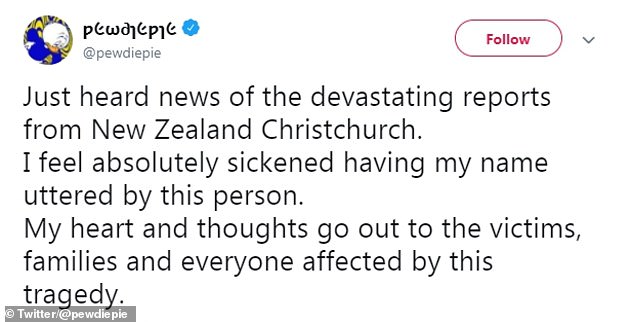 Tarrant told viewers ‘remember lads, subscribe to PewDiePie’ as he sat in his car outside the mosque before the attack.

The shooter, 28, killed 41 people inside the mosque during Friday prayers. 49 people were killed in total during the terror attack, with a further 48 injured.

PewDiePie, whose real name is Felix Kjellberg, took to Twitter to say he was ‘sickened’ that the terrorist had said his name.

Kjellberg, who is the highest paid Youtuber in the world, said: ‘Just heard news of the devastating reports from New Zealand Christchurch.

‘I feel absolutely sickened having my name uttered by this person.

‘My heart and thoughts go out to the victims, families and everyone affected by this tragedy.’

PewDiePie is the alias of Swedish YouTube giant Felix Kjellberg.

The 29-year-old internet sensation is a controversial character who has the most subscribed to channel on the video watching site.

He has a staggering 79,590,900 subscribers on YouTube – that’s more people than the UK has citizens.

Both of his parents, Johanna and Ulf Kjellberg, are successful Chief Executives of their respective companies in Sweden.

And having been schooled at Goteborgs Hogre Samskola, located in one of the city’s most prosperous areas, he could have been destined for a corporate life too.

Fortunately for his millions of fans, Kjelberg’s ambitions weren’t in line with his classmates’ at Chalmers.

PewDiePie, 28, has previously earned blacklash for including racist and antisemitic messages in his videos.

In July, he posted an insensitive meme related to the 25-year-old Demi Lovato following her overdose and alleged heroin use.

The YouTuber, who is from Gothenburg, Sweden and resides in Brighton, shared a meme that originally shows a nondescript character asking their mother for money.

The character pretends the money will be used to buy a burger but then uses the money to purchase heroin ‘like a boss’.

Back in February 2017, Disney cut ties with the YouTuber after he featured a man holding a ‘Death to all Jews’ sign in one of his videos.

‘I’m sorry, I didn’t think they would actually do it,’ PewDiePie told his viewers in a clip. ‘I feel partially responsible. It might just be my crude sense of humor, but I think there’s something funny about that.’

Seven months later, in September 2017, Felix was caught shouting the N-word during a live stream of himself playing the multiplayer online shooting game Playerunknown’s Battlegrounds.