The best new hotel arrivals around the world in 2022, from New York to Bali and the Cote D’azur

With travel restrictions easing at last in many parts of the world, holiday destinations near and far are welcoming tourists again.

There is even a host of stunning new hotels and resorts to tempt travelers overseas, from a Mayan-inspired newcomer in Mexico and Michelin stars in Majorca to an uber-cool addition on the Cote d’Azur.

RAINFORESTS AND ROMANCE IF YOU LIKE THE LONG HAUL

The LUX* Grand Baie in Mauritius, pictured above, is set on a gentle lagoon and boasts 116 suites

Sun, sea, and yet more sun are up for grabs in Mauritius at the sparkly new LUX* Grand Baie which has serious appeal for both families and couples.

Designed in her trademark gentle hues by Kelly Hoppen, it’s set on a gentle lagoon, with 116 suites that can be configured in different sizes and complement this Indian Ocean island’s French-accented charm.

A seven-night break starts at £3,610pp, including direct flights, breakfast, and transfers with the Inspiring Travel Company (inspiringtravelcompany.co.uk).

The Conrad Tulum on Riviera Maya opened its doors on January 15 and oozes honeymoon appeal.

Away from the packed Cancun end of Mexico’s Caribbean coast, you’ll get easy access to ancient ruins and rainforests but also delightful modernity in the shape of an expansive spa, eight restaurants, and miles of white sand.

Doubles from £460 room-only (hilton.com/en/hotels/cuncici-Conrad-Tulum-riviera-maya). By spring there will also be a more affordable all-inclusive Hilton next door with BA Holidays offering packages (ba.com) 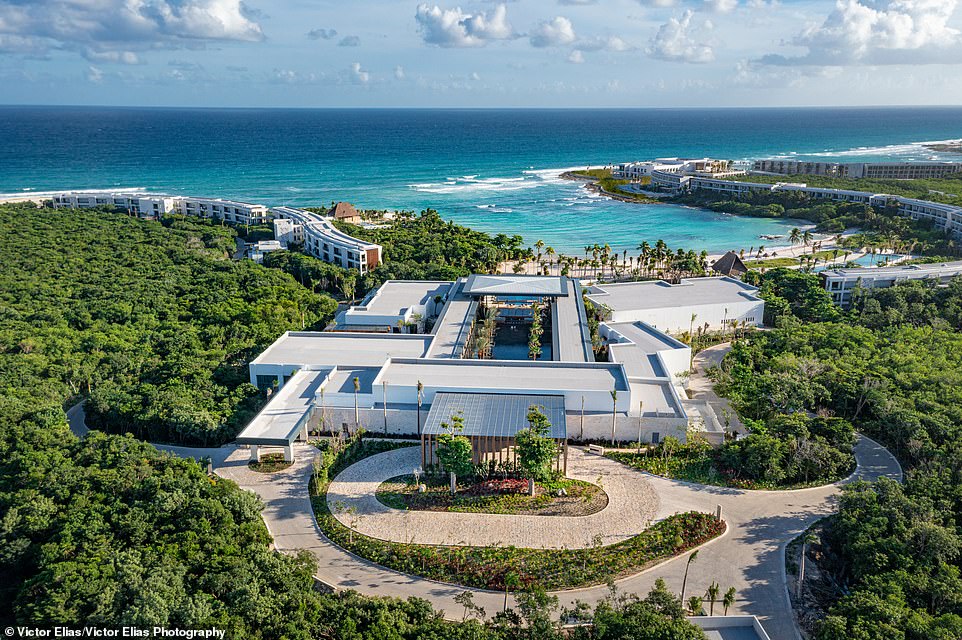 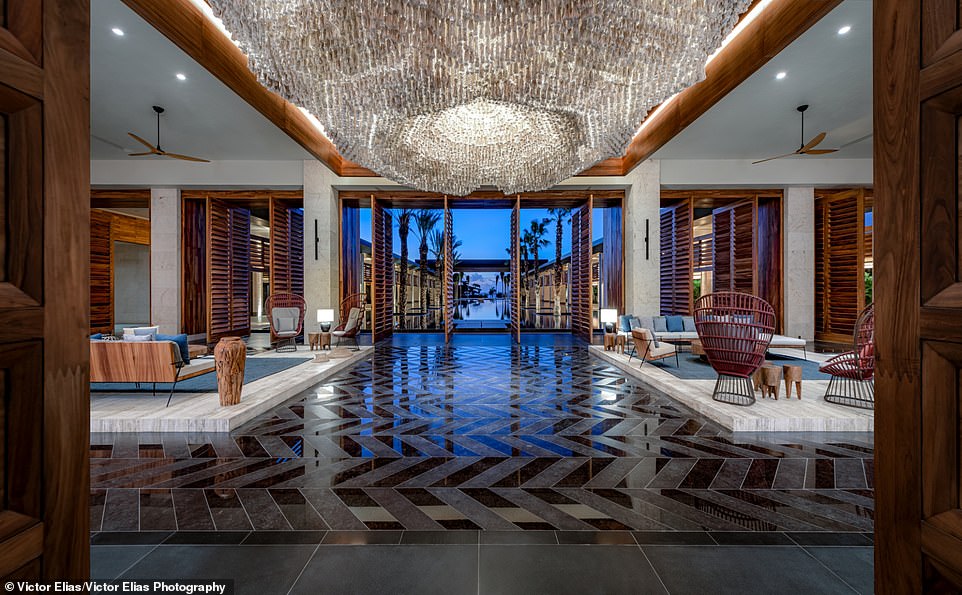 The lobby of the Conrad Tulum Riviera Maya. The resort, which opened earlier this month, oozes honeymoon appeal

In Barbados, the 02 Beach Club & Spa has a brilliant position; the village of Oistins – famous for its weekly fish fry – is just across the water. With powdery white sand and hot pink sunloungers, it’s a good place to soak away your stresses.

A week starts at £1,899pp, including flights, transfers, and all-inclusive accommodation (virginholidays.co.uk)

In April, couples will be able to head to the new Sandals in Curacao. The luxury all-inclusive concept is still in place, but with some nice tweaks.

Out goes the pub, in comes a floating bar and restaurant on a wooden Dutch ship and street-food-style snacks to augment Sandal’s heart-shaped commitment to romance. A week’s all-inclusive stay starts at £2,449pp, with flights and transfers (sandals.co.uk). 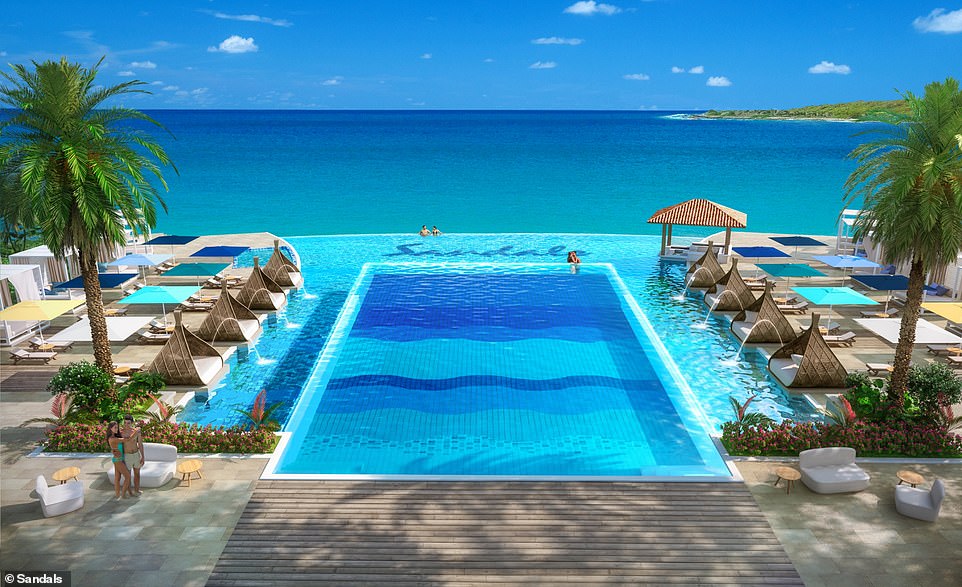 The luxury all-inclusive concept is still in place at the new Sandals on the Dutch Caribbean island of Curacao, but with some nice tweaks (shown here in a rendering) 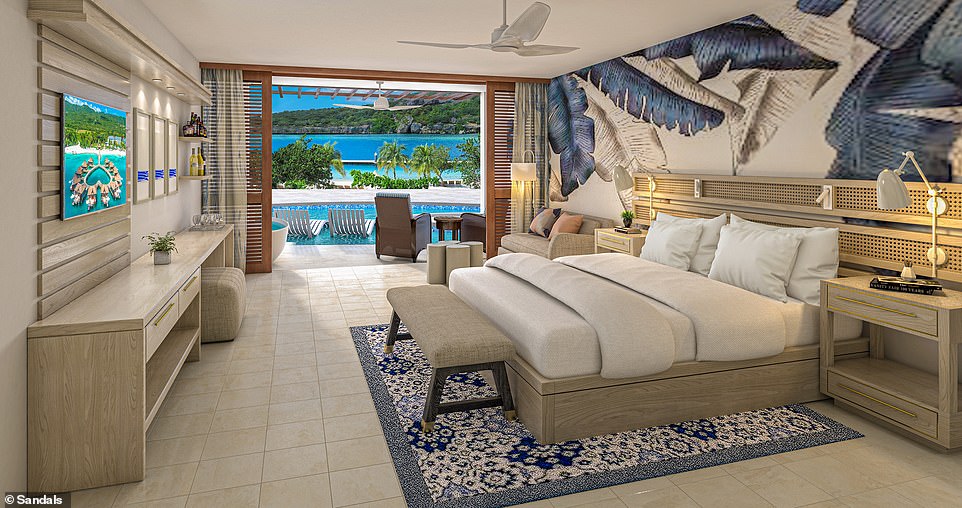 A week’s all-inclusive stay at the new Sandals starts at £2,449pp, with flights and transfers. Above is a rendering of one of the rooms

An easy flight from the UK and reliably sunny, Orlando has always been a draw for British visitors. Fans will be getting out their lightsabres for the Star Wars Galactic Starcruiser when it opens on March 1.

With the World Cup in Qatar this year, the poshest fan bases have to be the Katara Towers with Fairmont and Raffles (katarahospitality.com) in joined twin towers, while Rosewood is housed in a tower designed to look like a coral reef.

Just 45 minutes from Dubai by road but with not a skyscraper to be seen is the northernmost emirate of the UAE, Ras Al Khaimah, where the Anantara Mina Al Arab Resort will open this year. Surrounded by mangroves, the choicest accommodation is the overwater villas.

Rates to be confirmed (anantara.com/en/mina-al-Arab-ras-al-Khaimah). 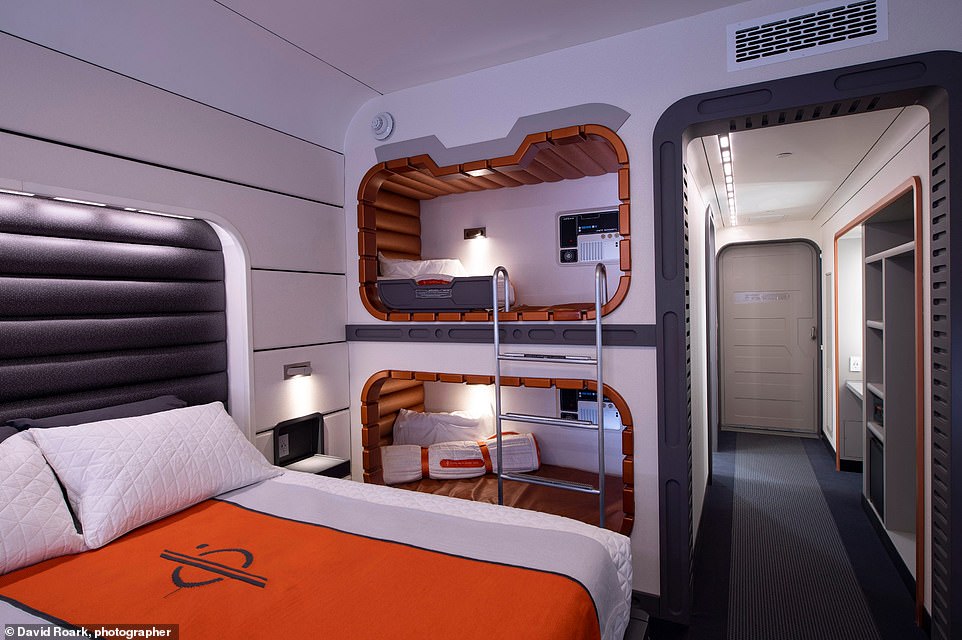 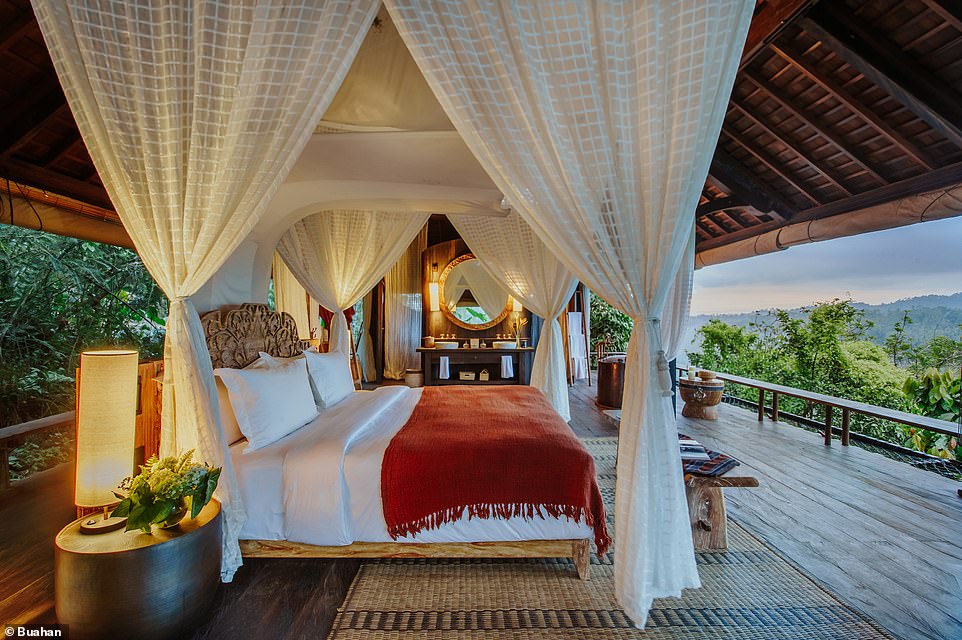 Open to the elements: Pictured is a bedroom at the windowless Buahan in Bali, which has new levels of sustainability

A pandemic isn’t going to stop Asia from innovating. The Postcard chain continues to pep up stays in Sri Lanka and Goa with a growing portfolio of stylish but budget-minded places to stay.

In Thailand, the Khao Yai region is one of the country’s best-kept secrets; a Unesco World Heritage Site with both national parks and vineyards.

The InterContinental Khao Yai has been created by interiors expert Bill Bensley with his usual sense of eco-minded panache. As well as typical hotel rooms, 45 vintage train carriages have been turned into luxury accommodation.

Bali continues to be an innovation hub, and Banyan Tree is debuting a hotel concept, Buahan, that has new levels of sustainability.

It’s built entirely from recycled wood, while food is sourced from a 25-mile radius. A ‘no doors, no windows’ design dispenses with air-con and offers views across the paddy fields. Half-board doubles from £527 (escape.banyantree.com).

WELLNESS AND WHITEWASHED IDYLLS ON THE SHORT-HAUL 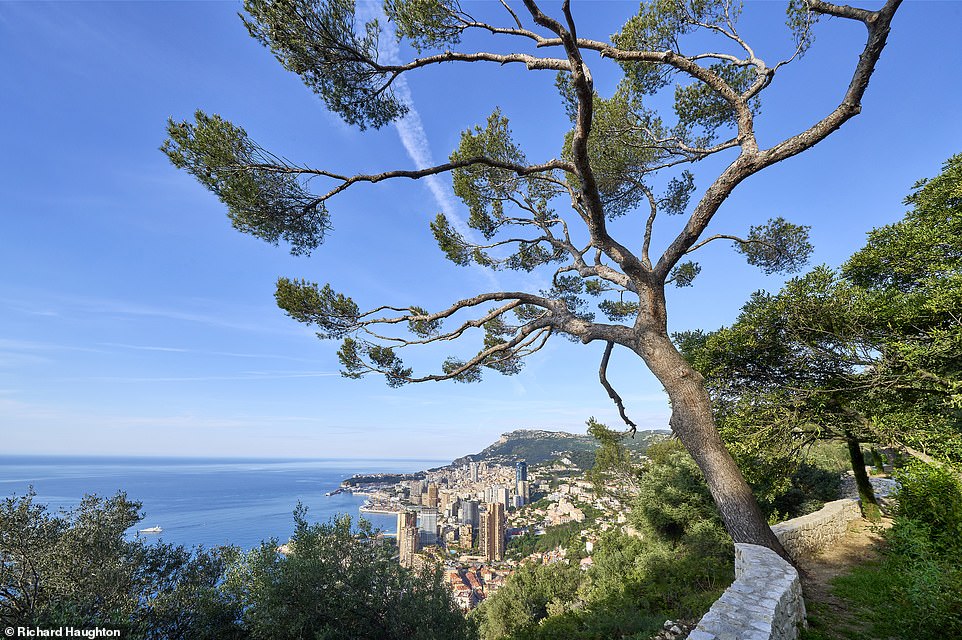 The Cote d’Azur, pictured, will truly be a hotspot this summer thanks to the recently opened Maybourne Riviera, set on the rocky hillside 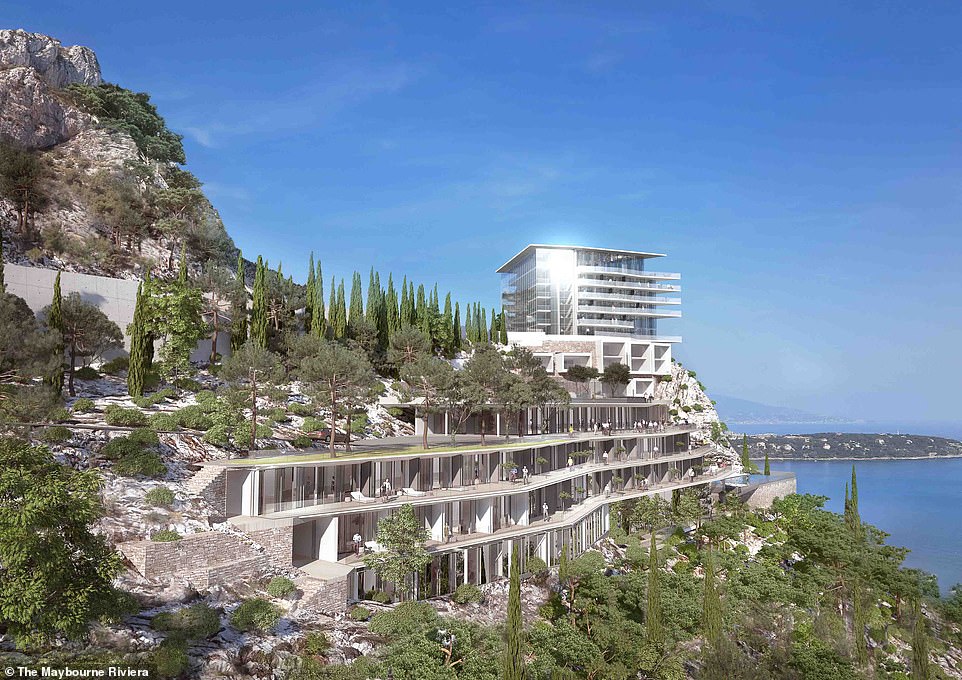 Striking: The Maybourne Riviera has infinity pools, world-class wellness spas, and three restaurants from some of Europe’s top chefs

Come spring, the Med will hot up in every way. From the owners of Claridge’s and The Connaught comes the Maybourne Riviera.

Perched above the Cote d’Azur, it has infinity pools, world-class wellness spas, and three restaurants from some of Europe’s top chefs, but all this beauty will have a hefty price tag. Doubles from £800 a night (maybourneriviera.com).

Its biggest rival is the nipped, tucked and luxed-up 19th Century Hotel La Palma on the island of Capri, opening in April. Part of the Oetker Collection, it promises Italian glamour with just 50 rooms, stellar sunsets and its own beach club to while away the afternoon.

Majorca is top of my Med wish list, especially with El Vicenc arriving in April, offering both infinity and swim-up pools, plus a restaurant from a Michelin-starred chef and just 34 rooms. On a cove near Cap Formentor, is the rugged, less explored part of the island and the hotel has bicycles to borrow. Doubles from £242 (elvicenc.com). 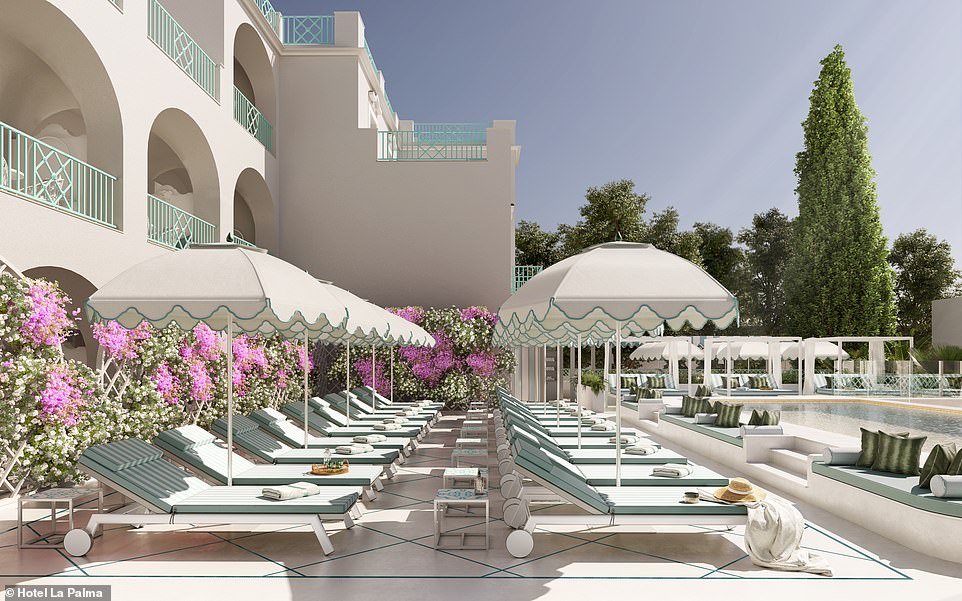 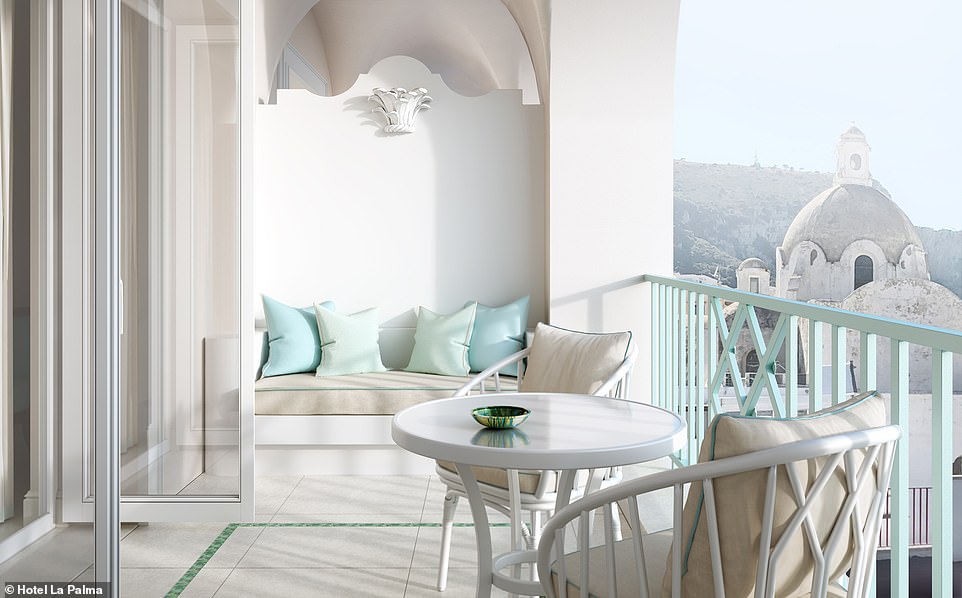 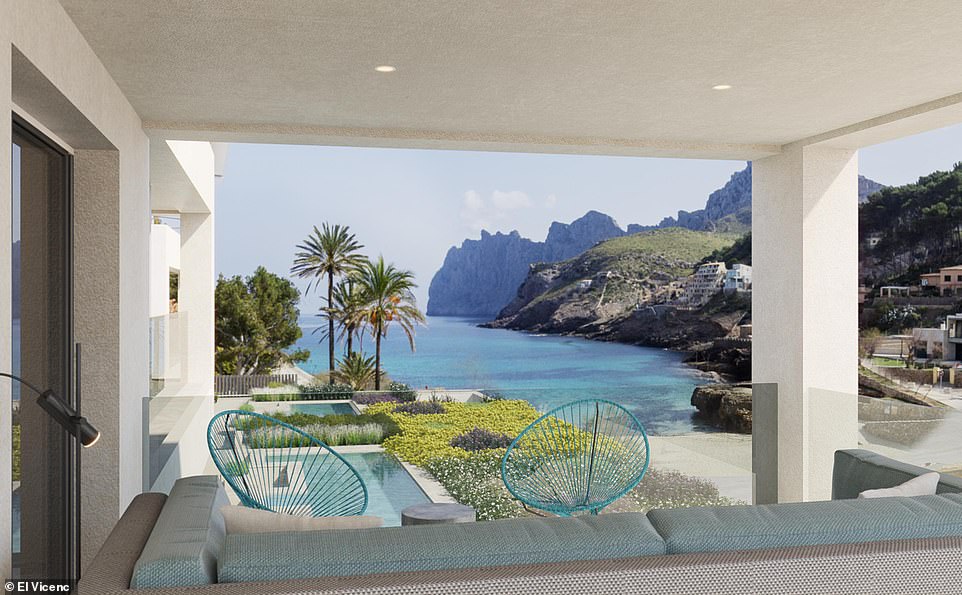 Bay of Plenty: The view from El Vicenc, which is nestled in a rugged Majorcan cove. It will have a restaurant from a Michelin-starred chef and just 34 rooms

In Ibiza Old Town, the Gran Hotel Montesol – once a billet for Orson Welles – is ready for a new generation to fall in love with it.

Newly renovated, there are 33 serene rooms, many with original balconies, a rooftop restaurant with Jewish-Spanish fusion food, and a vibe as low-key as Ibiza can manage. Doubles from £114 (granhotelmontesolibiza.com).

Sea Breeze Santorini Beach Resort opens in the spring, with just 37 rooms, every room with a private terrace and hot tub or swimming pool, all keeping to Santorini’s whitewashed charm.

Above all, there’s a private beach and an accent on chilling on Greece’s most Instagrammed island. Rates TBC (seabreezesantorini.com). 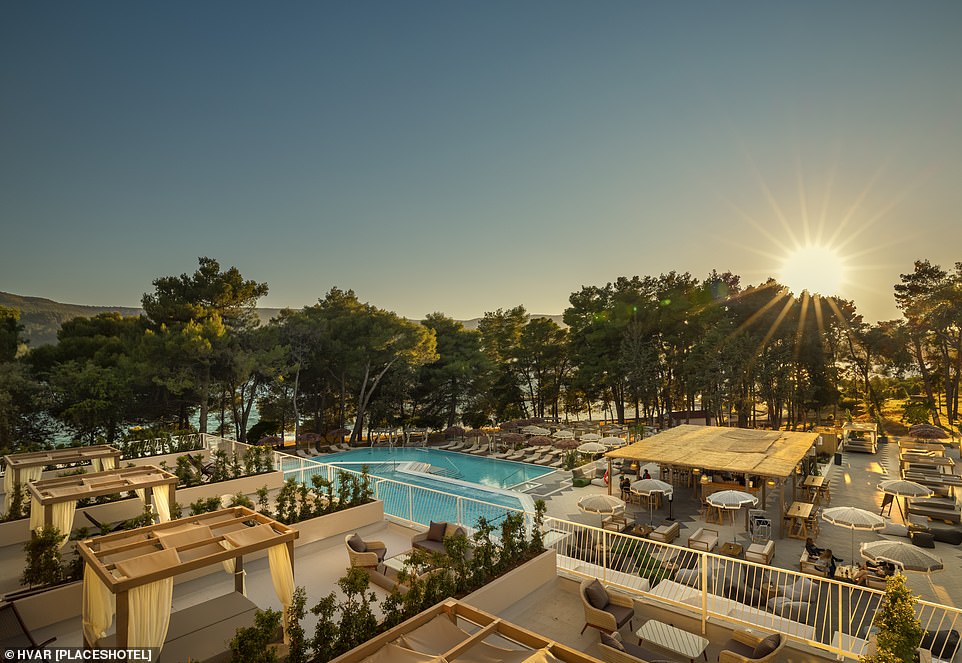 Half-board doubles at HVAR [PLACESHOTEL], pictured, which is set to open in May, are priced from £94 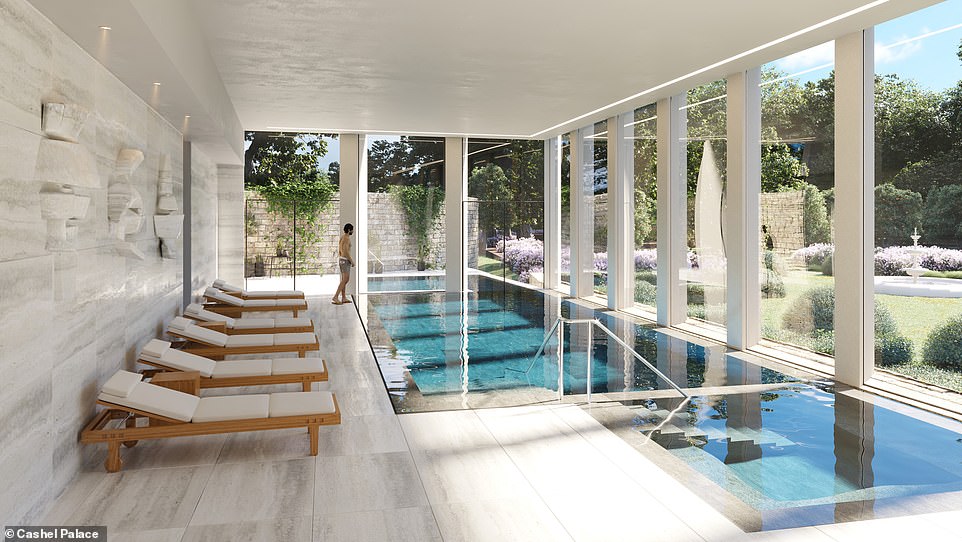 Cashel Palace, pictured in a rendering, has seaweed baths and treatments from Bamford and Biologique Recherche 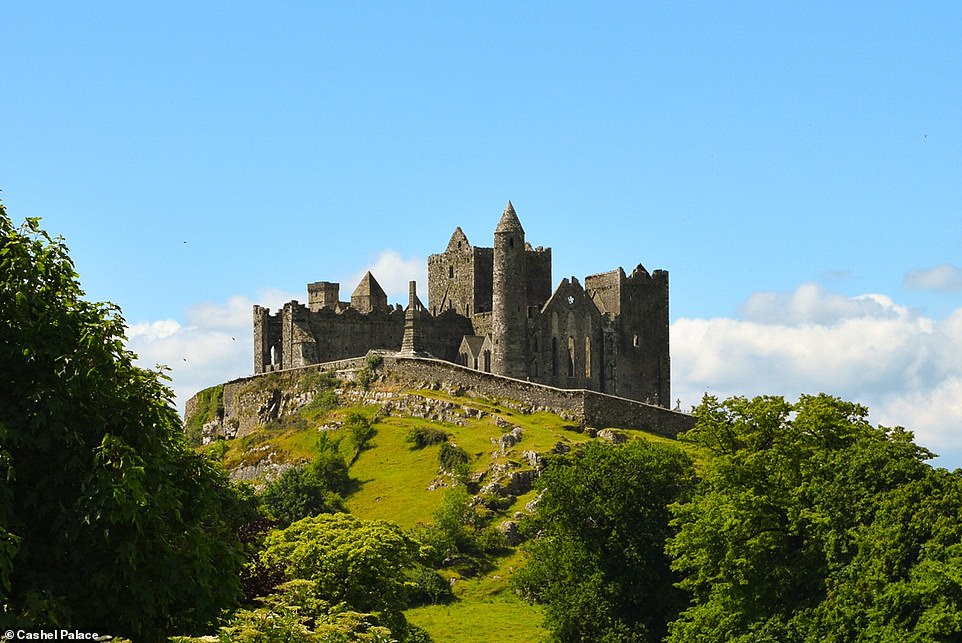 In Croatia, HVAR [PLACESHOTEL] will open in May on the buzzy, beautiful island of Hvar. It’s designed to be utterly flexible.

If you don’t get up for breakfast, you can use that credit for lunch or dinner or carry it on to the next day. Half-board doubles from £94 (valamar.com/en/hotels-hvar/ hvar-places-hotel).

In Tipperary, Cashel Palace has seaweed baths, treatments from Bamford, and Biologique Recherche – ideal for recovering from a blustery walk to the Rock of Cashel – plus 42 bedrooms and full Irish country-house charm. B&B doubles from £283, including breakfast.

MUSEUMS AND MODERNITY ON A QUICK CITY BREAK 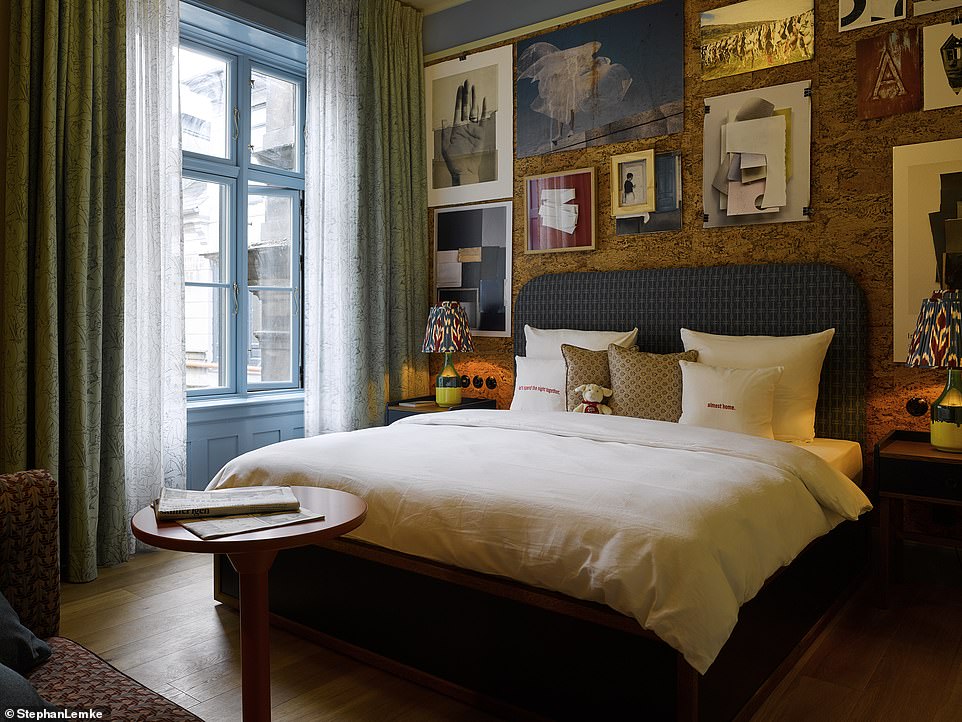 A room at the ‘delightful’ new 25Hours Indre By, which will open its doors in March in Copenhagen 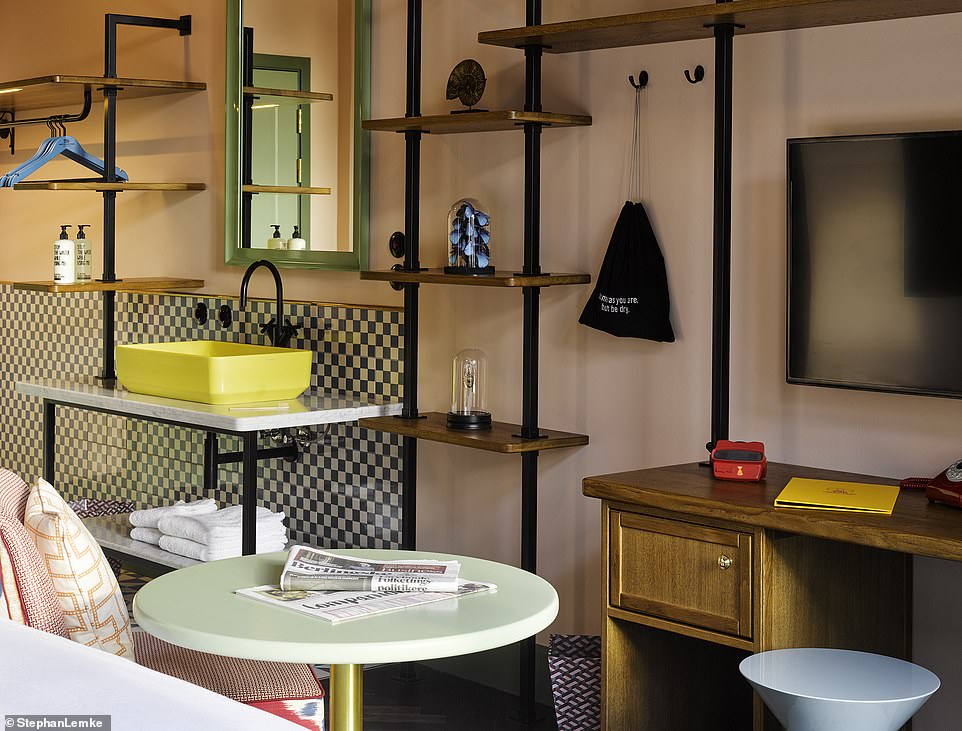 Pictured is one of the 243 art-filled bedrooms at 25Hours Indre By, which is housed in a former china factory

A trip to Berlin in December reminded me how fabulous a city break can be; the novelty of trying to pack everything into a weekend for a deep dive into museums, restaurants, and people-watching.

For those wanting a gentle start to city-breaking again, cozy, compact Copenhagen has the delightful new 25Hours Indre By, opening in March. The hotel has a strong backstory, including time as a china factory and a student building.

Now there are 243 art-filled bedrooms, a garden, a properly Scandinavian cafe, restaurant, and basement bar. B&B doubles from £119 (25hours-hotels.com/en/hotels/copenhagen/indre-by). 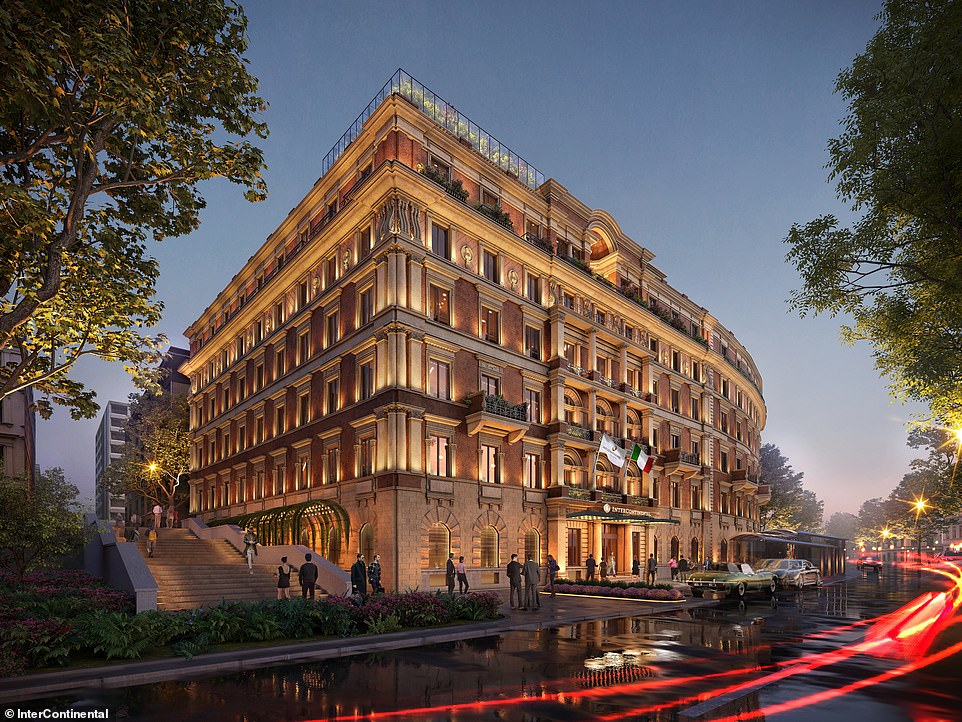 The InterContinental Rome Ambasciatori Palace, pictured in a rendering, opens in October in a fin-de-siecle mansion that used to be the US embassy 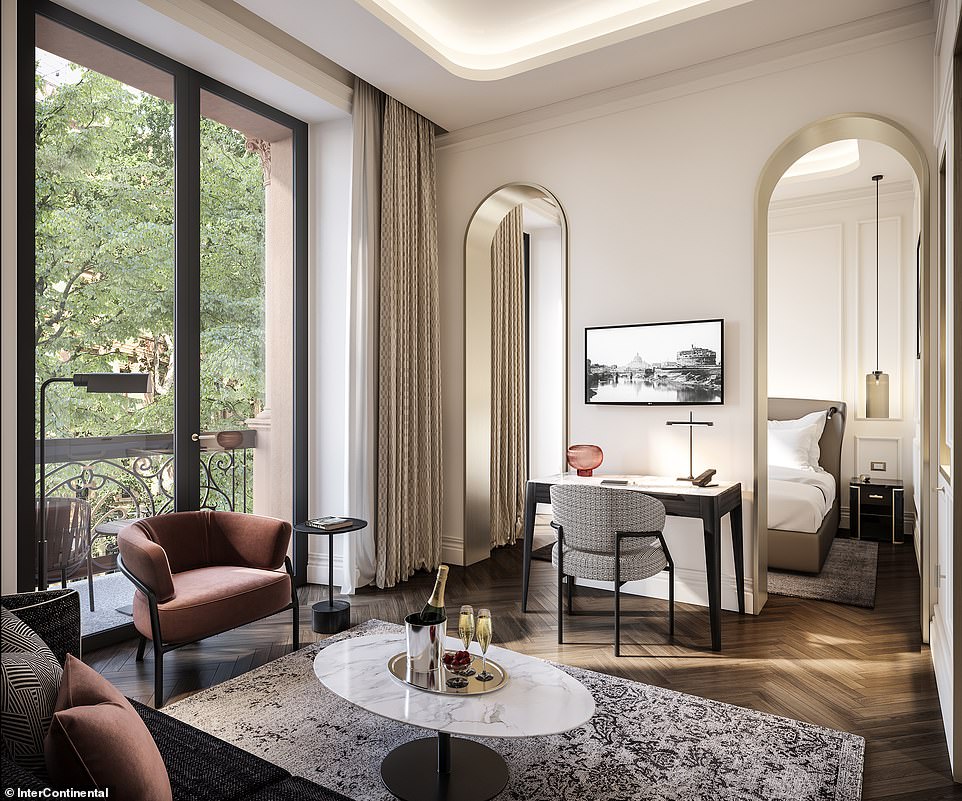 A rendering of one of the rooms at The InterContinental Rome Ambasciatori Palace. The hotel boasts ‘seriously grand proportions’ 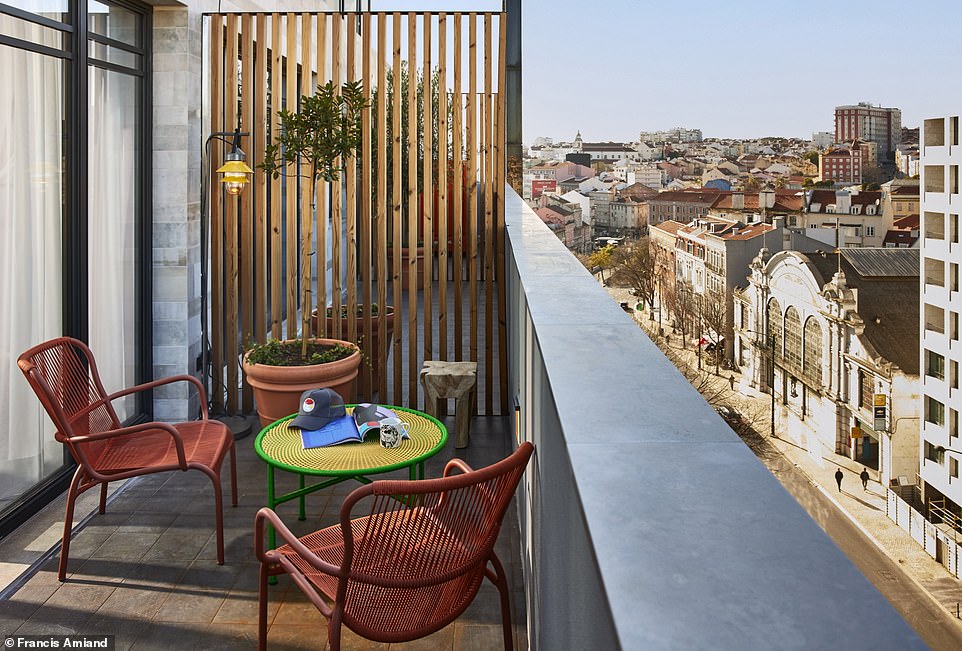 Pictured is one of the balconies at the ‘stylishly budget’ Mama Lisbon, which opened last week 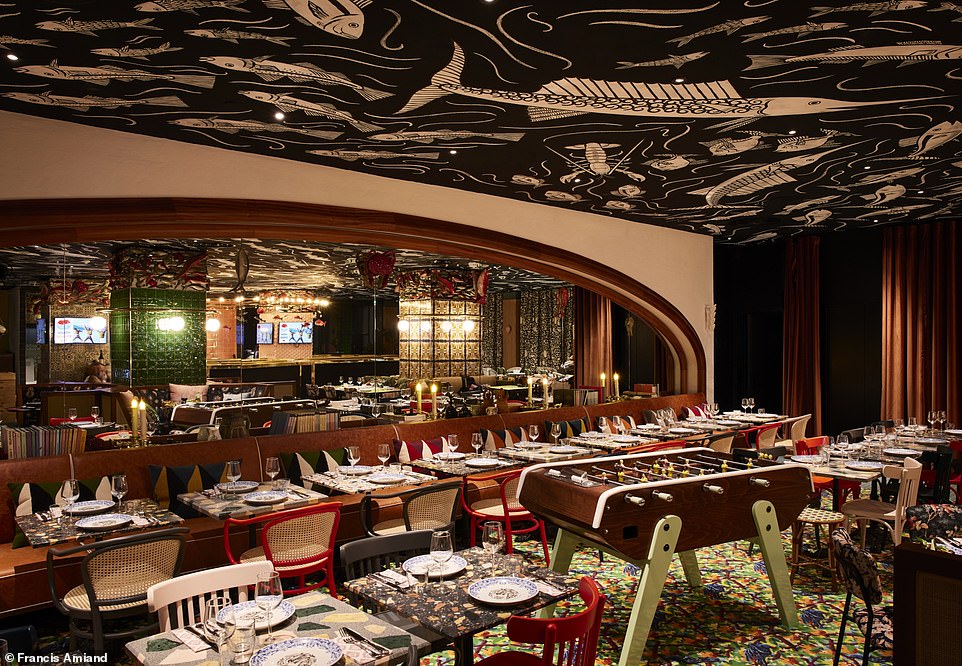 Lisbon is similarly weekend-friendly and the stylishly budget Mama Lisbon, which opened last week, has an all-day restaurant and rooftop with double deckchairs and 130 funky rooms. Doubles from £74 a night (mamashelter.com/lisboa/).

Paris is getting a couple of lovely hotels, including a Delano, but Rome will have a quartet of openings.

The InterContinental Rome Ambasciatori Palace opens in October in a fin-de-siecle mansion that used to be the US embassy, with seriously grand proportions and views onto the stately Via Veneto and close to the Villa Borghese. 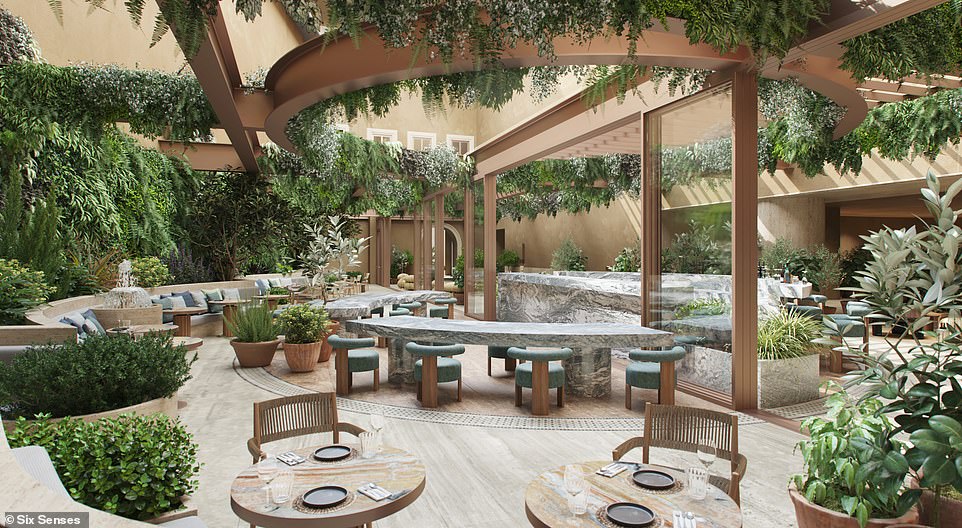 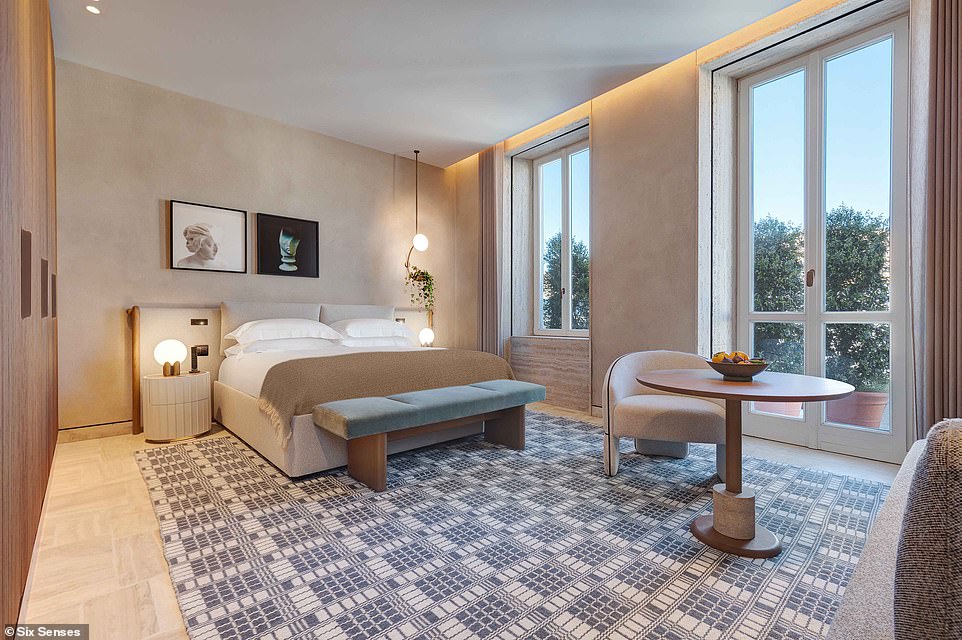 The Six Senses is housed in an 18th Century palace near the Trevi fountain. Above is a rendering of one of the rooms 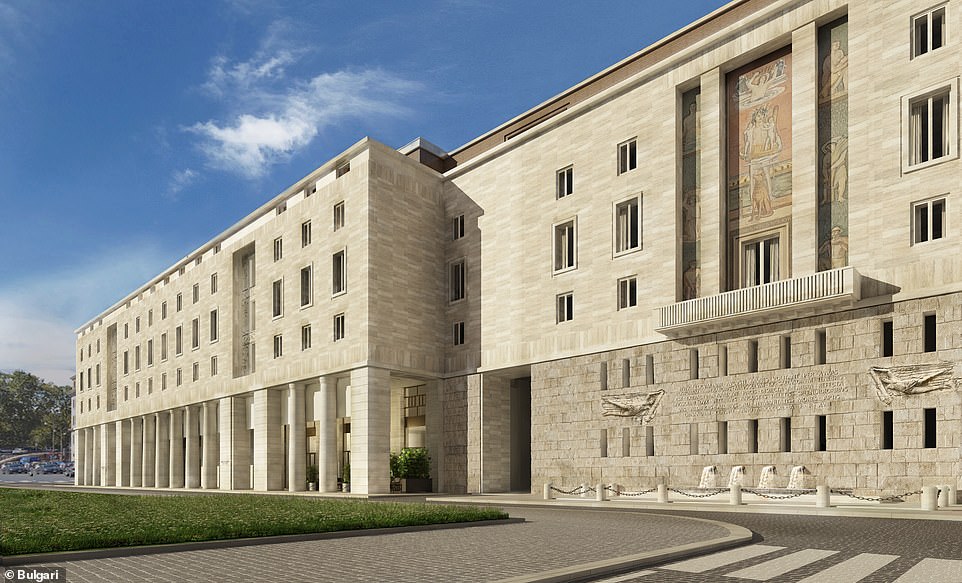 The Bulgari jewelry and fashion house is also opening a hotel in Rome (shown here in a rendering) – expect marble, polish and a lot of confidence 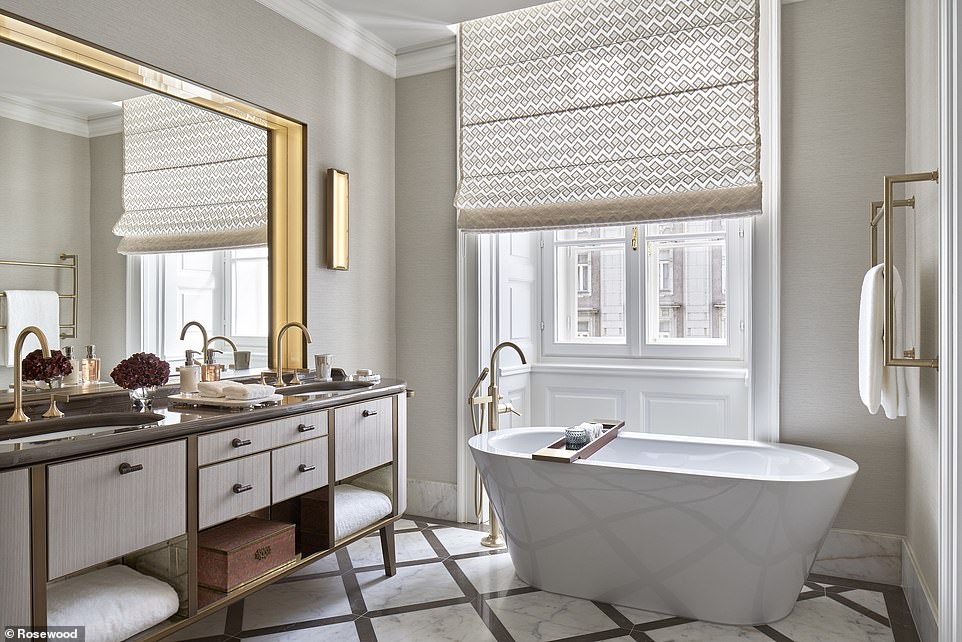 Rosewood is opening a 99-room hotel in the heart of Vienna on Petersplatz. Pictured is a rendering of one of the bathrooms 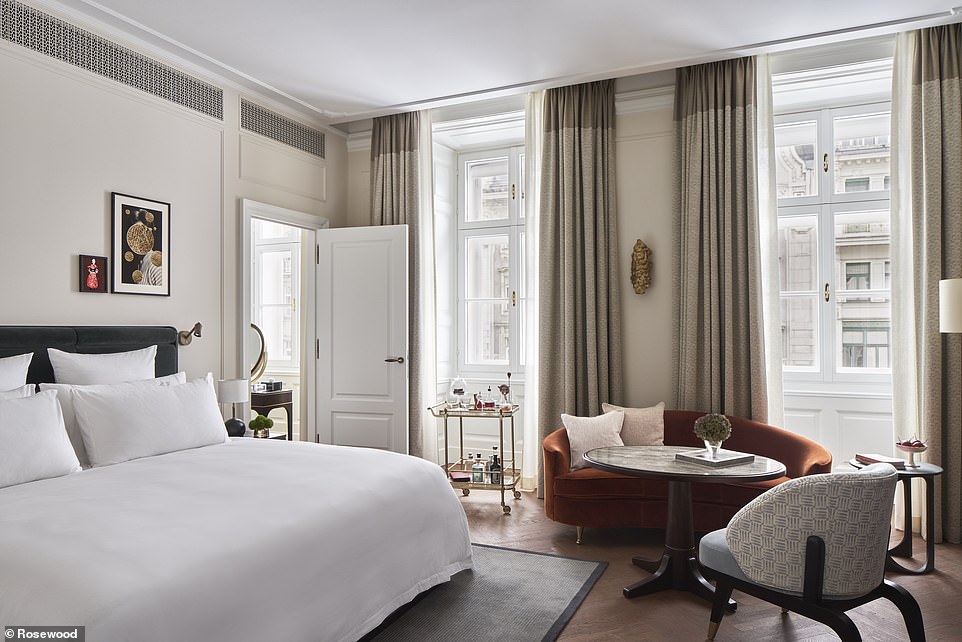 A rendering of one of Rosewood’s suites. The new hotel will offer views over the city’s copper roofs and onion domes 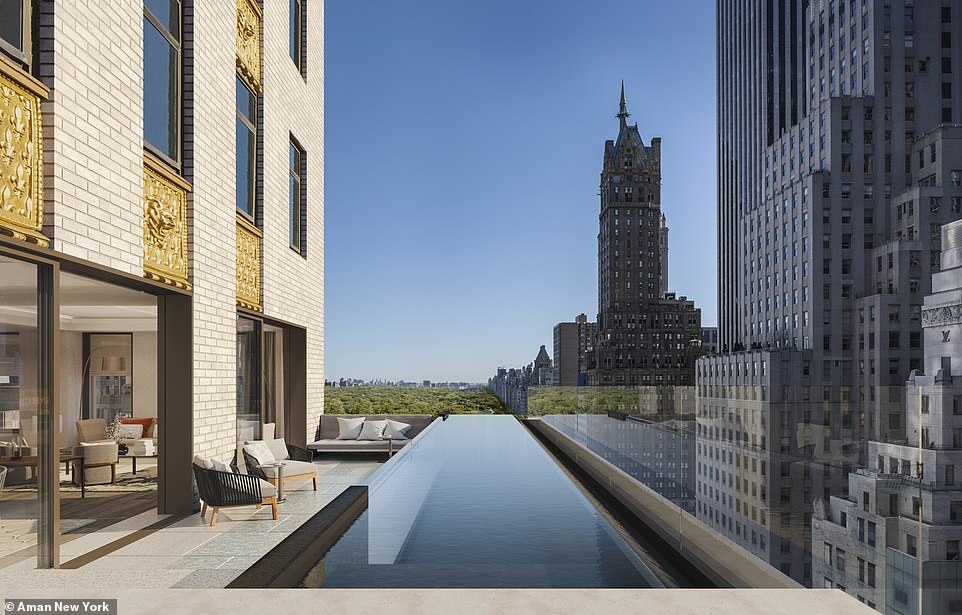 Aman New York, shown here in a rendering, will provide serenity and a rooftop swimming pool plus three floors of spa 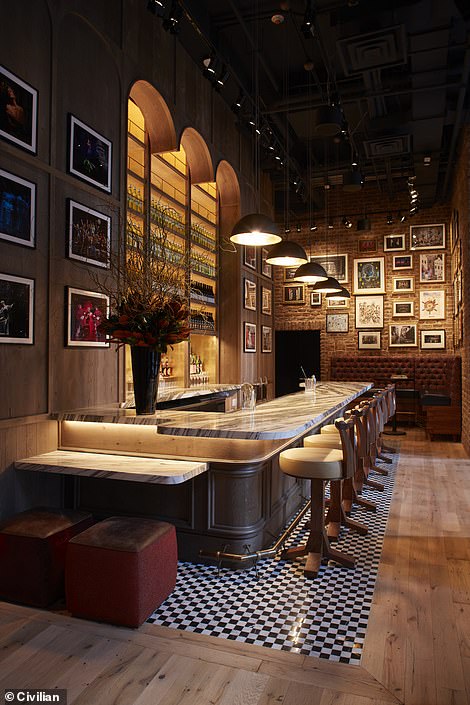 A bar at the Civilian hotel in New York, which just opened off-Broadway

Six Senses opens a 95-room hotel in an 18th Century palace on Piazza di San Marcello near the Trevi fountain, with an organic garden planned for its rooftop bar and restaurant.

The Bulgari jewelry and fashion house also open a hotel in its home city – except with marble, polish, and a lot of confidence. Rates TBC (bulgarihotels.com/en_US/rome).

There’s more history when Rosewood opens a 99-room hotel in the heart of Vienna on Petersplatz, moments from the cathedral and Mozart’s house and with views over the city’s copper roofs and onion domes. Rates TBC (rosewoodhotels.com/en/vienna).

New York continues to pulsate away. The Ned NoMad (thenomadhotel.com/new-york/) will blend hotel guests with club members when it opens this summer near Madison Square Garden, and Aman will provide serenity and a rooftop swimming pool plus three floors of the spa.

There are different rates depending on which facilities you prefer, such as daily housekeeping or gym access. Doubles from £101 (civilianhotel.com).