The bird-watching A to Z, from Alderney to Zambia

One of my favourite Gerard Manley Hopkins lines is from his poem The Windhover: ‘My heart in hiding stirred for a bird.’

If so, you are a birdwatcher. You need no expertise, no experience, no equipment beyond your eyes and your ears. All you require is your sense of wonder, your sense of delight.

Stirred for a bird: Simon Barnes remembers staring with frank disbelief at his first English kingfisher (like the one above) and marvels at his first encounter with the carmine bee-eater

And here’s another shocking thing: the more birds you see, the better they get. Most pleasures are of the fading kind: you experience stuff and it’s great, but sooner or later you’ve had enough and it’s time to move on. Involvement with the wild world is quite the opposite: the deeper in you go, the more you love it. Would you travel for a bird? It’s a big thing to ask. It raises your commitment to another level. But it also raises your chances of seeing greater wonders than you ever bargained for.

Birds are associated with places: you need to go to those places. The chances of seeing an eagle in the heart of London are remote: but if you travel to the Isle of Mull you have a choice of two. 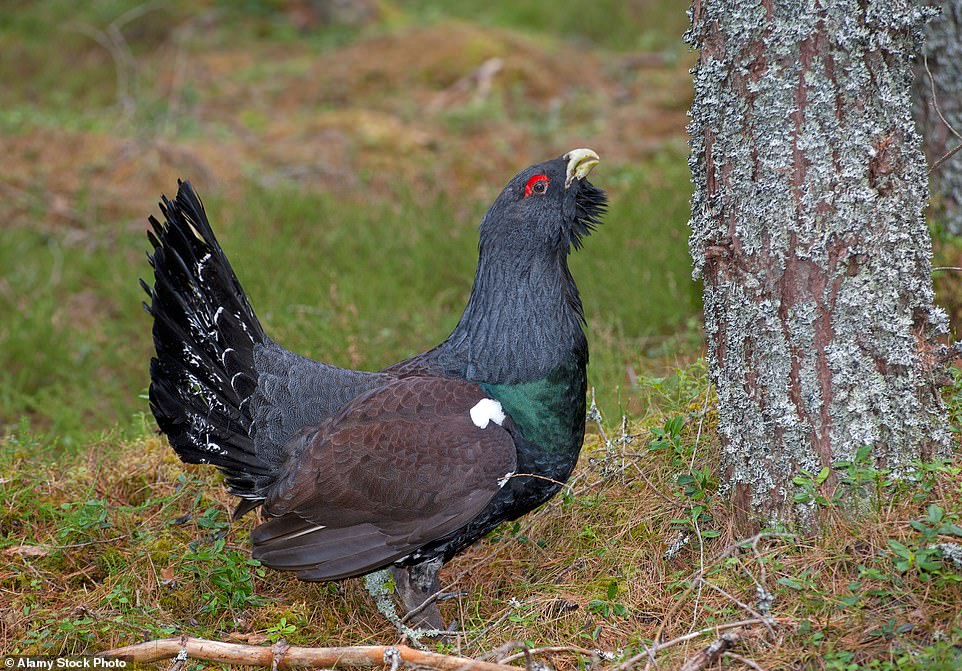 Big fella: The Capercaillie (above) is described as ‘impossibly big’, as large as a turkey. Spot one at Abernethy Forest, Scotland

I remember staring with frank disbelief at my first English kingfisher; I remember the first time I saw the African sky filled with carmine bee-eaters, birds the colour of cherryade, so many and so bright they make your eyes hurt. You, too, can have such joys.

Birds enrich every single day of my life: and birds have taken me all over the world.

A journey for a bird is, it seems to me, the very best kind of journey. Here are my top picks from my travels . . . 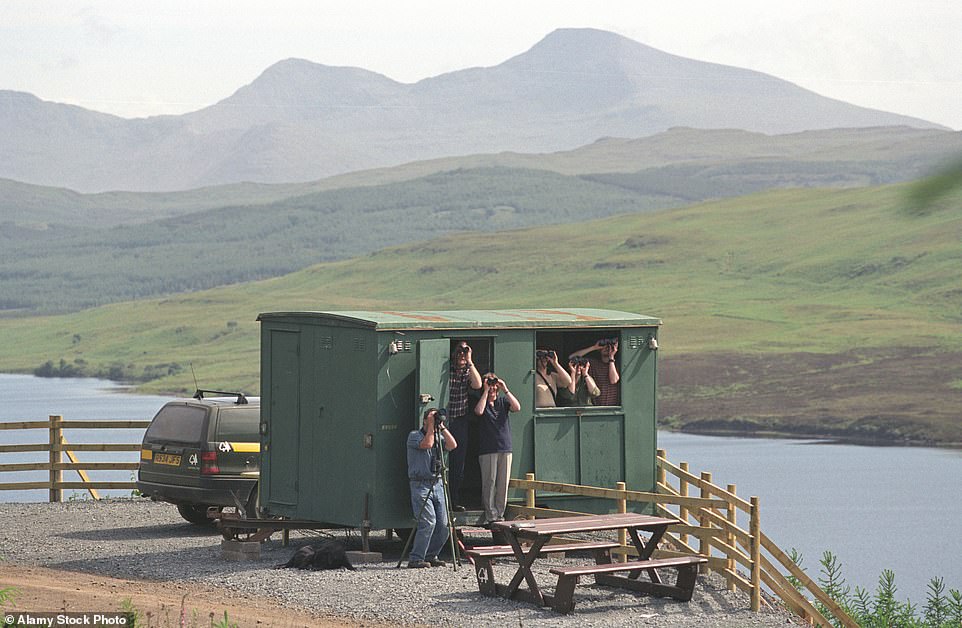 Something to mull over: Sea eagle spotters hide near Salen on the Isle of Mull which has two species, golden and white-tailed, as well as two varieties of single malt whisky that are produced on the island. The birds are so big they can blot out the sun

They are so vast, you think they’ll blot out the sun. That’s one reason eagles make you gasp. The Isle of Mull has not one but two species: golden and white-tailed, one for the land and one for the sea.

They are both life-changing birds that radically alter your view of the world and its possibilities, and if that weren’t enough, the island also produces two single malt whiskies.

WHEN TO GO: Spring and summer.

A six-night full-board cruise around the island with guides, from £1,995 per person (naturalist.co.uk). 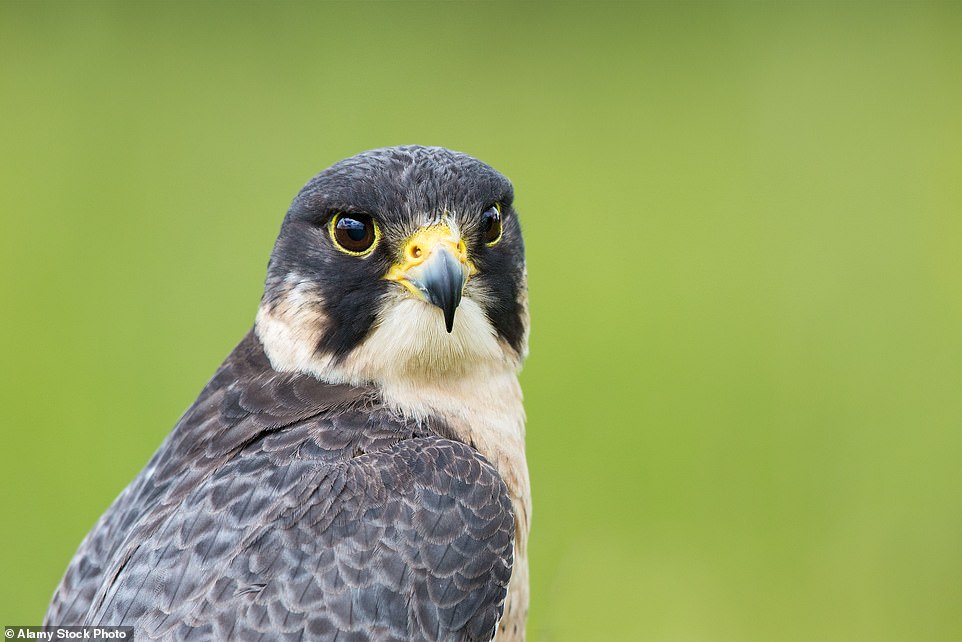 Falcon fast: The fastest flying bird on the planet – the Peregrine Falcon (above) – can be spotted at various parts of the British Isles including Symonds Yat in Gloucestershire, the roof of the Tate Modern in London and Norwich Cathedral

WHERE TO SEE BRITAIN’S FEATHERED SUPERSTARS

Big white bird with a beak like a soup ladle. Spot it at Cley next the Sea in North Norfolk.

Five-foot tall and prone to dancing. Hickling Broad in Norfolk.

The fastest flying bird on the planet. Symonds Yat in Gloucestershire, the roof of the Tate Modern in London and Norwich Cathedral.

It arrives for the winter at Slimbridge in Gloucestershire.

The hawk that plunges into water for fish. Spring and summer at Loch Garten in Scotland.

You can hear this phenomenal singing bird in parks and gardens everywhere in spring.

Fast-flowing rivers in northern England and the West Country.

Often brightly coloured. Find it on slow rivers and banks above. Sit still and hope. Try Lackford Lakes in Suffolk.

Like a small, sleek, souped-up and deeply fabulous seagull. See it on rivers and coasts in spring and summer.

Impossibly big — as large as a turkey. Abernethy Forest in Scotland.

Minsmere on the Suffolk coast is perhaps the most famous nature reserve in Britain. It’s best known for avocets, birds that went extinct in this country and then miraculously returned just after World War II; now they’re the logo of the RSPB.

You can see marsh harriers, gorgeous birds of prey that were down to a single pair in the UK in 1971. In May, listen to the nightingales.

You can visit the reserve simply by rolling up; entrance is £9, or free to RSPB members (rspb.org.uk). Guide yourself, with the help of excellent staff and volunteers.

WHEN TO GO : All year is good, with April and May peak time (avocets March to September).

Bempton Cliffs in Yorkshire is an RSPB nature reserve that’s home to a fantastic seabird colony. This is the ultimate sensual experience: the sight, the sound, and above all, the smell of it. Here is a colony — skyscrapering up the cliffs from the sea — that you can get to without going near a boat: razorbills, guillemots, and, at the top, the beloved puffin. In peak months, up to half a million seabirds can be seen.

WHEN TO GO: From March to October.

HOW TO DO IT: B&B doubles at Swandale Guest House in Bridlington from £65 (swandaleguesthouse.co.uk, 01262 424857). The RSPB offers guided walks and cruises (rspb.org.uk).

Alderney, one of the smaller Channel Islands, is another favourite spot.

Is there anything more spectacular than a gannet fishing party, hundreds of them plunge-diving into the sea with beaks like a spear-point?

On Alderney, you can watch a colony from land, often with birds fishing close to shore. The place is well worth the trouble of getting there.

WHEN TO GO: All year is good; spring is special. 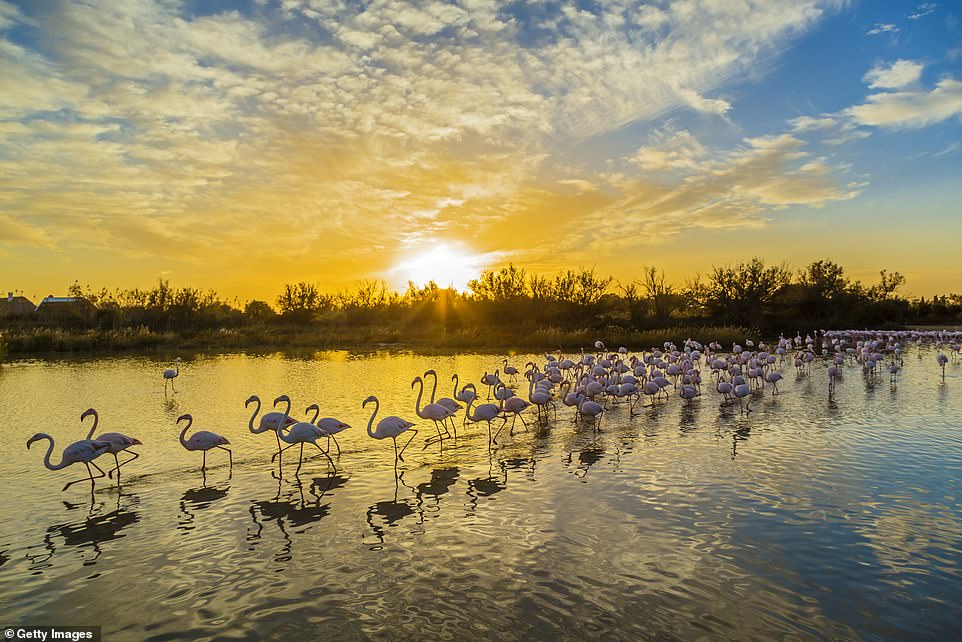 French flamingos: The Carmargue, just south of Arles in France, is the closest place to Britain where you can see wild flamingos (pictured above in the Pont de Gau wildlife reserve) as well as the ‘yellow house’ as part of a Van Gogh pilgrimage

You haven’t lived until you have spent a little time with flamingos: tall, pink and deeply improbable.

And yet they are European birds, easily accessible in the Camargue in the south of France. This wild, swampy place is home to the nearest wild flamingos to Britain.

Plenty of other great wildlife is there, but the flamingos steal the scene (parc-camargue.fr). The Carmargue lies just south of Arles, so you can combine it with a Van Gogh pilgrimage to the ‘yellow house’ in Arles, where the artist once lived (vangogh route.com). 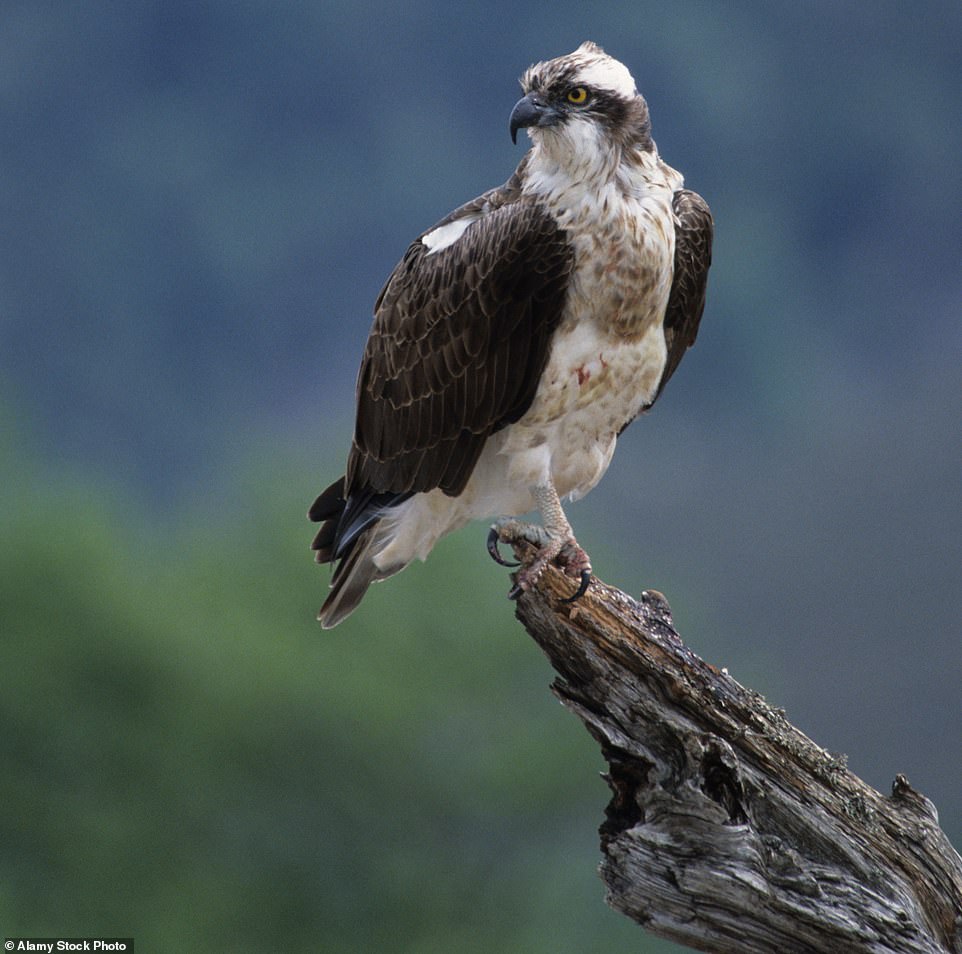 No osprey to fortune: The Osprey (above), a hawk that plunges into water for fish, visits Loch Garten, Scotland, in the spring

WHEN TO GO: Good all year; flamingos best between December and March.

HOW TO DO IT: Fly to Marseille, about an hour’s drive away, from £57 return from Gatwick (easyjet.com). Stay at Le Cheval Blanc, a smart modern hotel in Arles, from £67 room only (hotelarles-chevalblanc.com). For more places to stay, see marvellous-provence.com.

HOW TO BE A BIRDER WITH THESE TIPS

DUCKS IN THE DELTA

The Danube Delta in Romania is thrilling. There is simply nothing like birds in enormous numbers to bring joy to the observer: and the delta here is one of the world’s great birding spectacles.

All the best wetlands will do this, for as long as they remain undisturbed.

See pelicans, cranes, swans, ducks and geese in populations that boggle the eyes and the mind.

WHEN TO GO: Early spring to late summer.

HOW TO DO IT: A seven-night full-board guided trip is from £2,395 pp (naturalist.co.uk). Further information at romaniatourism.com.

The Spanish Pyrenees bring big winds, strong up-draughts and the mightiest of all flying birds, which love places where they can sit on the wind as easily as you sit on your sofa. Griffon vultures fly so close to the rock-face here you’d swear they must crash, and every now and then you will find the impossibly huge lammergeier with its 9ft wingspan.

There’s information on where to go at birdinginspain.co.uk.

WHEN TO GO: After the snow, so late spring and summer.

The Luangwa Valley in Zambia is one of my favourite places — and the birding highlight is the carmine bee-eater.

As if that bright cherry colour wasn’t enough, it’s set off with artful touches of black and patches of eye-blinking blue. What’s more, they nest in colonies of a thousand.

There are also elephants, lions and leopards. This is trip-of-a-lifetime stuff, and not cheap.

WHEN TO GO: From June to the beginning of November.

HOW TO DO IT: A nine-night full-board Easy Birding in South Luangwa trip from £3,295 pp including flights (naturalist.co.uk). 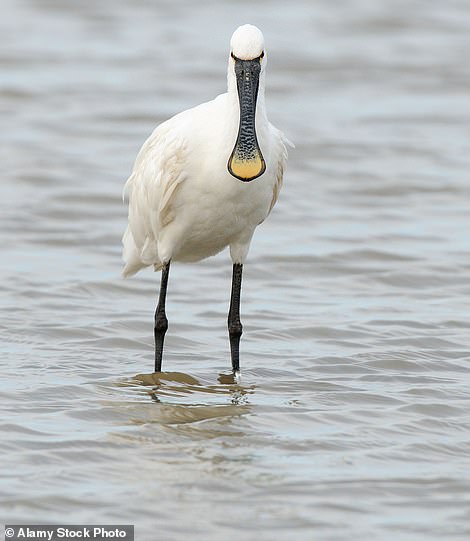 Loving spoonbill: His beak, likened to a spoon ladle, the spoonbill can be spotted in Norfolk or in the Everglades

I love the Everglades in Florida. It’s worth making a trip just for the birds, although it’s easy to take a day trip to this apparently endless wetland if you’re in Florida to see the theme parks. The star species — for me anyway — is the roseate spoonbill, which looks like a bright pink stork with a soup ladle for a beak.

Plenty of trips across the Everglades are offered, mostly by boat. Check that your trip is primarily for birds, or you’ll end up watching alligator wrestling.

When to go: All year is good, but December to March is best.

How to do it: Day trips from £152 pp, or a two-hour trip is £83 pp (evergladesadventure tours.net). Or try everglades birding.com.

The Caroni Swamp in Trinidad is just so easy. Some great birding spots require days of travel through rough country, while others you can reach by taxi. This is one such place: about 20 minutes from the island’s capital, Port of Spain.

Here you can find birds you’d thought only David Attenborough was allowed to see. Most spectacular is the flypast of the scarlet ibis: like a flock of flying guardsmen.

Trinidad is ten miles from the coast of South America and is brilliant for birds.

WHEN TO GO: All year round; October to March is best for scarlet ibis.