The book’s sold millions, now the story of The Boy, The Mole, The Fox And The Horse is coming to TV

Artist and writer Charlie Mackesy has tears in his eyes as he reflects on the incredible response to his international bestseller The Boy, The Mole, The Fox And The Horse. His beautiful words and images have been placed in hospitals and used by soldiers suffering from PTSD, while the book itself has sold more than two million copies in the UK alone.

‘I didn’t think I’d get any of this reaction,’ says Charlie, a shy, quietly spoken man. ‘I remember one of my first book signings.

‘There was a boy – a teenager – who was the last in the queue, standing very quietly looking at me. As I signed his book he said, ‘I just want you to know, your drawings helped me stay.’

‘I wasn’t quite sure what he meant. ‘Stay?’ I asked him. He replied, ‘I’m still here.’ A tear rolls down Charlie’s cheek.

Artist and writer Charlie Mackesy’s international bestseller The Boy, The Mole, The Fox And The Horse has sold more than two million copies in the UK alone

‘If my work has helped even just one person, I will take that.’

Clearly the book is much more than just a children’s story, despite its deceptively simple dialogue. Ostensibly it’s about a boy we meet in a snowy world, based on the Northumberland landscape Charlie grew up in.

He’s lost, but soon meets the cake-obsessed Mole, the wary Fox and the shy Horse. Together, they bring out the best in each other and form a little family, and through a series of brief but profound conversations deliver a message of warmth, empathy and kindness.

Perhaps its best-known line is when the Boy asks the Horse, ‘What is the bravest thing you’ve ever said?’ and the Horse replies simply, ‘Help’. 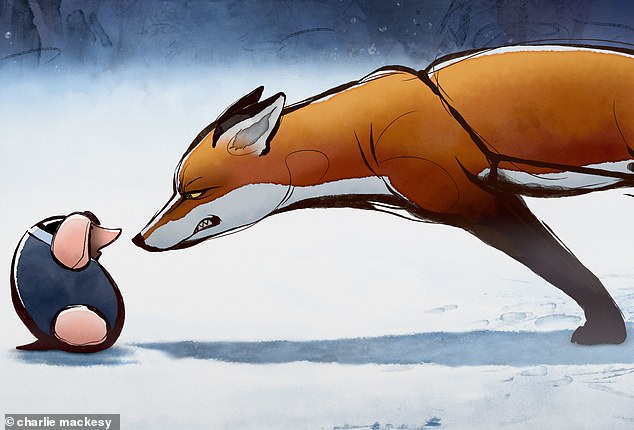 Clearly the book is much more than just a children’s story, despite its deceptively simple dialogue (Pictured The Fox and The Mole)

In some ways it’s a blueprint for how to live life, and now it’s been turned into a beautiful animated film airing on BBC1 on Christmas Eve. The whole project has been something Charlie, who drew on his own mental health issues, never expected.

‘It began as just me, a strange person in a little room, but then my drawings seemed to be taken on by others,’ he says. An established artist, Charlie started posting some of his characters and words on Instagram, and they touched a chord with adults, particularly men, who were struggling with their mental health.

Idris Elba is a legend, what a dream to have him expressing the Fox’s terror, and his wisdom at the end

‘I hired this pop-up space to show some of them, thinking maybe 12 people and my mum would come, but 10,000 came in six days,’ he recalls. ‘There was a lot of sobbing, a lot of men sobbing with me.’

It was there he was first approached about turning his work into a book, which finally came out just a few months before the pandemic, when many people felt lonelier than ever before. A film of the book was also something Charlie never expected.

But he always knew who he wanted to voice the Mole – Tom Hollander. ‘Tom’s voice has humour but also pathos,’ he says. ‘He can make you laugh but then suddenly feel a different way entirely.’

He wanted an Irish accent for the Horse and asked Gabriel Byrne if he’d consider it. Byrne called him and said, ‘I am the f***ing Horse!’

Charlie was thrilled too when Idris Elba took on the Fox. ‘He’s a legend, what a dream to have him expressing the Fox’s terror, and the wisdom we see at the end.’ 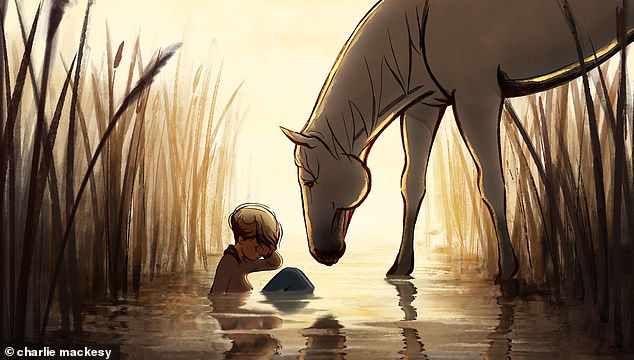 The book has been placed in hospitals and used by soldiers suffering from PTSD. It has now been turned into an animated film airing on BBC1 on Christmas Eve

Newcomer Jude Coward Nicoll voices the Boy, with a purity which Charlie loved. They all recorded their words separately, and then the animation was created to fit the dialogue.

An astonishing 150 animators from around the world worked on the hand-drawn, 30-minute film, but initially it was a challenge for them to mimic the free style of Charlie’s beautiful work. ‘I felt like a teacher marking work and sending it back saying, ‘Could do better’, as I had to constantly draw over their drawings,’ he recalls.

‘It was a learning curve for all of us. But then they all got it; they were incredible and we now have this brilliant team of animators who speak the same language.’

If the film touches hearts in the same way as the book did it will be because Charlie has put himself in all of these recognisable characters. ‘There’s part of me that’s like the Fox who’s wary of connection, the Mole who tries to medicate himself with food, the Boy who’s lost, and obviously the Horse, who can be wise in very small ways.

‘I didn’t really know what I was doing but the thing I love most is how other people have related to it. I’ve been caught up in this journey and I don’t know where it will end.’

Giving us strength to draw on: He’s inspired millions with his simple messages of hope. Now best-selling author and artist Charlie Mackesy is helping us through lockdown, too