Adventure-hungry Fiona Quinn has become the first woman to stand-up paddle board (SUP) across the Irish Sea as part of her record-breaking triathlon attempt.

The 31-year-old accomplished the journey on Thursday after setting off near St David’s in Wales before reaching the Irish coast 15 hours later. Her latest feat is part of a world-record attempt to walk, cycle and SUP the length of Britain in a one-off triathlon which she hopes to complete before August. 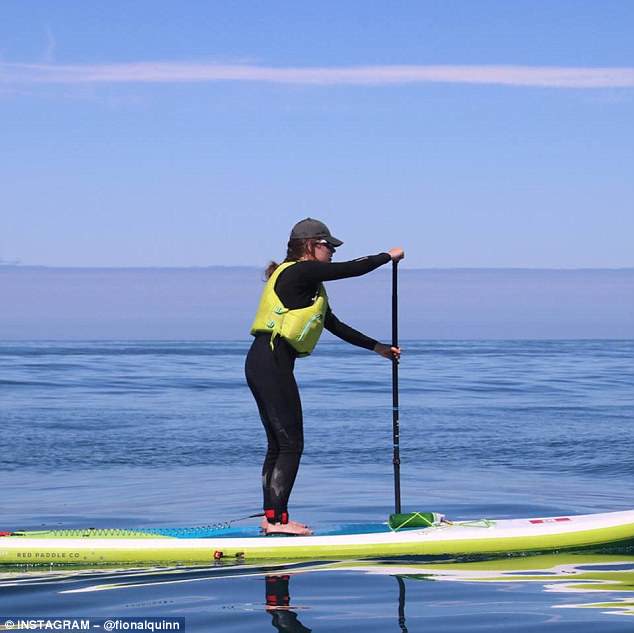 Quinn is currently travelling up the coast of Ireland as part of her attempt to SUP from Land’s End in Cornwall to John O’Groats in Scotland. The trip is expected to measure more than 800 miles on a route that includes paddling through the Caledonian Canal. She has given herself six months to complete the expedition which began late April but hopes to finish it ‘within one or two months’.

In an interview with BBC Breakfast yesterday, Quinn said she wants to inspire more women to challenge themselves with explorations of their own.

‘I do like to challenge myself and get out of my comfort zone. But I do want more women to get out there and adventure a bit more,’ she told viewers. ‘A lot people you see on TV adventuring are men. There’s lots of women out there doing cool stuff so hopefully someone will be inspired and take on their own journey on the back of this.’

Quinn, who confesses she has a fear of deep open water, reached the Irish coast on May 31 after setting off four miles from the coast of St David’s in southwest Wales at 6.30am before landing near Rosslare at 9pm. She uploaded a photo one day after arriving at Arklow in Ireland to celebrate her joy having become the first woman to cross the Irish Sea by SUP.

‘The sea was so kind to me – no peakiness! Glassy flat and even dolphins came to say hello and give me a motivational push just 15 or so miles from the end.’ She is believed to have tried the sport at sea just three times beforehand.

‘I’ve done paddle boarding before but mainly on lakes and rivers – not on the sea. The weather has been a huge challenge — it’s so weather dependent — on lakes and rivers you can get away with most weather conditions. But if the swells too big or wind too strong out on the sea you just have to wait. There’s been lots of waiting around which has been frustrating.’

Quinn has already completed the top-to-bottom course of the UK twice in 2017 when she walked and cycled from and to the same locations. In spring last year walked 993 miles over 57 days, according to her website. That was followed with a long-haul cycle of 1,200 miles in September. Completing a third quest by SUP would round off a one-off triathlon she set out for herself.

‘I like defying my own expectations and those that others have of me, and so coming up with crazy ideas and making them happen is loads of fun. I’ve never done something totally unique before so the idea of trying to see if I could make it happen was really exciting.’

She is paddling with a support boat and team for a challenge she describes as both physical and mental. Her previous two efforts on bicycle and foot were completed solo.

‘I’m about a third of the way in,’ she told MailOnline from the water. But the weather should be much better from here on in and so I should make much quicker progress. It’s nice to know the hardest part is behind me, which means I can relax a little and enjoy it more.’

Quinn was particularly taken by the efforts of fellow adventurer Sean Conway who completed a ‘length-of-Britain’ triathlon in 2015. Conway, who didn’t do any activity by SUP, rode on bicycle, swam and ran three times between Land’s End and John O’Groats over a period of seven years.

‘(Conway showed) that adventure doesn’t have to be in far flung places — Britain and Ireland offer and incredible adventure playground.’

Quinn worked as a researcher in sustainable real estate at Kingston University for four years before starting her own business in 2010. Wanting more than an office job she went on to explore and find her true calling in adventure.

About her current trip up and through the length of Britain by sea, she writes:

‘Adventure is waiting for us right here on our doorstep and as we travel Britain’s coastline. We’ll be able to explore little known spots only accessible by water and experience our rugged and beautiful beaches from a new perspective. Another purpose of the expedition is ‘championing women in adventure. All the while pushing myself like I never have before.’

The Land’s End to John O’Groats, abbreviated ‘LEJOG’ for short, is a popular route among thrill-seekers as it represents the greatest distance between two points in mainland Britain.

It made headlines when car fanatic Tommy Davies boasted of driving the journey in just nine hours 36 minutes, much to the chagrin of road safety campaigners.