The carb blocker proven by science to promote weight loss

A carb blocker is proven by science to promote weight loss and prevent post-meal bloating.

Developed by Polish scientists, Tribitor, which is dissolved in water and consumed 15 minutes before eating high-GI foods, inhibits the absorption of carbs, preventing high insulin levels and the deposition of fat around the midriff, according to Kate Marczak, who was a lead scientist on the supplement’s trials.

Tribitor, which starts from £25 and is available to buy online, also stops blood sugar spikes in the blood, and therefore subsequent energy slumps and sugar cravings, she adds.

In the first phase of one of the supplement’s trials, which had 120 participants, Tribitor was shown to reduce glucose spikes by 45 per cent and insulin spikes by 38 per cent.

As well as weight gain, the consumption, and therefore absorption, of high-GI foods, such as white bread, rice and pasta, has previously been linked to type 2 diabetes and accelerated ageing.

In a piece for Healthista, editor Anna Magee uncovers what carb blockers are and how to chose one that works for you.

WHAT IS THE BEST TIME OF DAY TO EAT CARBOHYDRATES?

He carried out the research with the University of Surrey by asking healthy volunteers to eat either the majority of their daily carbohydrate intake in the morning or evening.

The idea of taking a pill or powder that can negate the effects of carbs on your body is a seductive one.

Carb blockers have become a key trend in healthy eating for 2018 – but what do they actually do? How do you know if you need one? And most importantly, how do you know if the one you are taking works?

What do carb blockers do?

Carb blockers claim to reduce the amount of glucose and insulin spikes your body experiences after eating foods high in refined carbohydrates. These foods could be anything from rice, pasta and bread to pizza, popcorn, fizzy drinks and chocolate.

Carbohydrates all break down into glucose in the blood, with refined versions, such as bread, pasta and sugar, leading to excess insulin release as they cause sharp spikes in blood sugar that signal the body to make more of the hormone to process it.

This can not only lead to a sugar crash but also cravings and a post-eating slump.

Insulin is the hormone produced in the pancreas that helps the body move sugars from food into our bodies’ cells.

The hormone transports glucose to the liver and then muscles where it is stored as glycogen to use as energy.

If there is any leftover, which there usually is, it is taken to the bodies’ fat cells and stored there, particularly around the midriff.

Taking a carb blocker before a meal high in refined carbohydrates could help lessen glucose and insulin spikes.

This is not a license to eat doughnuts all day, as carb blockers do not completely negate the effects of carbohydrates on your body, they simply lessen their effects.

Dr Theodora Mantzourani, a London based GP, and specialist in endocrinology and diabetes with a special interest in weight management, said: ‘The intake of high GI foods makes your post-meal blood sugar level go up very quickly.

‘A natural compensation mechanism of your body is the release of the hormone insulin. This enables the decrease of blood glucose levels. The higher the glucose spike, the more rapid the insulin reaction.

‘This is where post-meal slumps and the cravings for more sugar and carb heavy meals occur’.

Therefore, if you are following a healthy diet but find it difficult to avoid the occasional high-carbohydrate treat without being a complete food bore, a carb blocker could help slow the release of glucose into the blood, lessening the need for insulin.

How do I choose a carb blocker?

Look for a carb blocker with good scientific evidence behind it, as well as one that contains concentrated ingredients that have been shown to work.

Most carb blockers contain single ingredients that have carb-blocking effects such as white bean or green coffee. This means they only affect one stage of the carbohydrate-digestion process, which has three stages.

The carb blocker proven by science

Ms Marczak said: ‘It’s a drinking powder that helps inhibit the digestion of carbohydrates after they have been consumed.

‘Most of the carb blockers on the market influence only one stage of the carbohydrate digestion process.

‘Tribitor’s action is more complex and inhibits all three stages of the absorption process your body goes through each time you eat a carb: digestion from starch to sugar, then conversion from sugar to glucose and finally glucose absorption in the intestinal tract.’

The supplement contains three carb-blocking ingredients and has scientific trials demonstrating its effectiveness.

How can you be sure it works?

Dr Mantzourani said: ‘Nutritional supplements are loosely regulated, and manufacturers’ claims are usually made for isolated ingredients and not for the supplement as a whole.

‘Carb blockers on the market claim to work based on evidence regarding generic ingredients such as white kidney bean extract.

‘In contrast, Tribitor has undergone robust animal and human trials as a whole supplement in the same manner companies test drugs before making them available to the public, making it unusual in the supplement market.’

An additional advantage is the amount of active ingredients in Tribitor are defined, controlled and confirmed in every batch, so you can trust you are getting a product that is both effective and safe.

What is in it?

These active substances work by reducing the activity of enzymes that enable sugar and carbs to break down into glucose.

Ms Marczak said: ‘Some amount of carbs consumed would still be absorbed as Tribitor inhibits but doesn’t block the carbohydrate absorption process entirely.’

Unabsorbed carbs are disposed of naturally.

According to Dr Mantzourani, patients who take Tribitor for at least three months have a reduced waist circumference and less sweet cravings.

She said: ‘Both effects make sense as low-GI diets, which is what Tribitor translates into, have been shown in the medical literature to promote abdominal fat loss and to reduced sugar cravings.’ 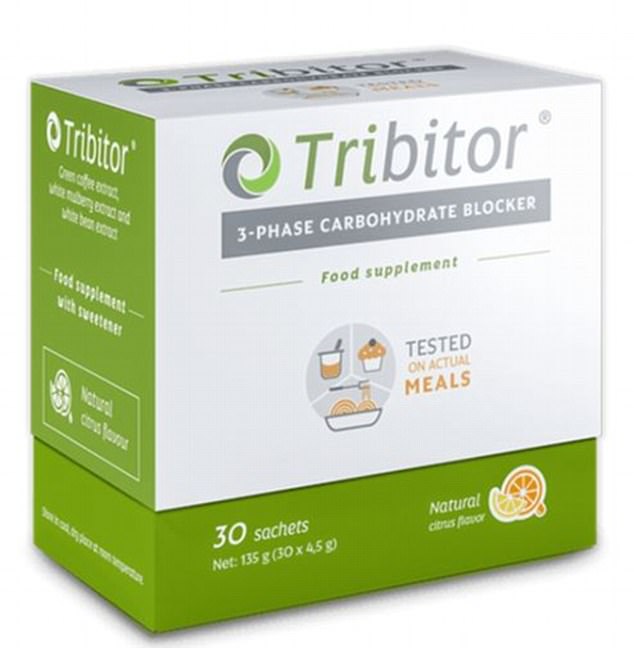 Tribitor inhibits the absorption of carbs, preventing the deposition of fat around the midriff

What are high GI foods?

The glycemic index (GI) is a value assigned to foods based on how slowly or quickly they cause increases in blood glucose levels.

GI levels go from 0 to 100 with pure glucose being 100. Therefore the closer a food’s GI is to 100, the more it will spike your blood sugar.

As a general rule:

Low GI (<55): Examples include dark rye or wholegrain bread, brown rice and quinoa, as well as unprocessed fats and meats.

High GI (70 and above): Examples include cakes, chocolate, sweets, biscuits and fizzy drinks.

What happens when you eat lots of high GI foods?

‘With consistently elevated insulin levels, fat cannot be released from tissue as a back up source of energy when glucose levels drop, which means it stores the fat and the energy source needs to be delivered from outside the body in the form of carbs.

A higher risk of type 2 diabetes

Ms Marczak said: ‘Consistently elevated glucose levels not only prevent the release of fat from fat tissue, [they] also contribute to insulin resistance, which increases your risk of type 2 diabetes.

‘With tissues being insensitive to insulin, the pancreas keeps over-producing it, which leads to its exhaustion and eventually perhaps type 2 diabetes.’

When you eat high-carb foods, your body makes substances, known as advanced glycation end products (AGEs), to deal with the sugar onslaught.

These increase oxidative stress in the body, accelerating ageing.

Scientists have observed the effects of AGEs most notably on the skin.

Dr Mantzourani said: ‘Collagen is particularly susceptible to AGEs formation and can increase susceptibility to ageing while a tightly controlled, low-GI diet may reduce collagen AGEs and slow down skin ageing.’

Carbohydrates should be obtained from whole foods, particularly fruit and vegetables.

Also ensure meals contain protein, such as lean meat, fish, eggs or pulses with some fat like avocado, nuts, seeds and olive oil, as this combination can slow the release of glucose into the blood.

This article was originally published by Healthista and reproduced with their permission.