Adopting the caveman, or paleo, diet for a month gave journalist Susannah Taylor glowing skin and a celebrity-worthy physique (and she allowed herself a few cheat glasses of wine).

The paleo diet involves eating like our hunter-gatherer ancestors – namely no additives, preservatives or chemicals.

Going back to basics allows you to munch on fish, meat and berries – but no dairy or grains, which have become a staple in the modern western diet.

Aside from improving followers’ skin and promoting weight loss, cutting out processed and sugary foods is also thought to improve heart health and boost energy.

In a piece for Get The Gloss, Susannah Taylor talks what you can eat, the results she saw and whether she’ll be carrying on. 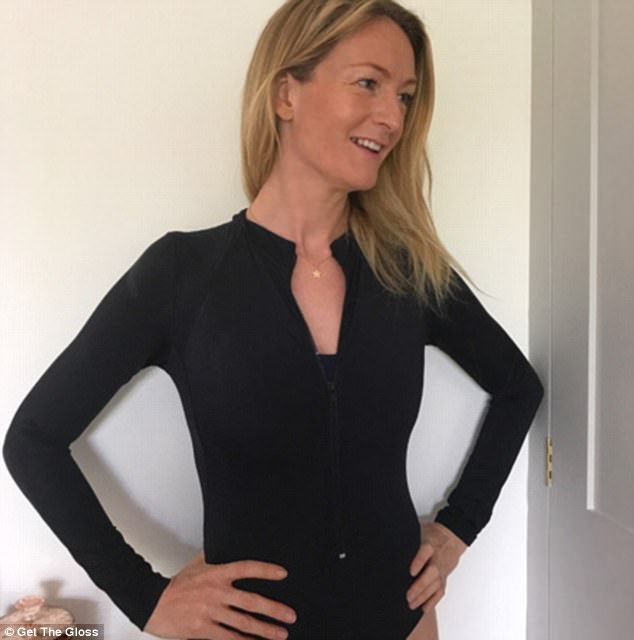 This is despite occasionally having lattes, dark chocolate and white wine (pictured before) 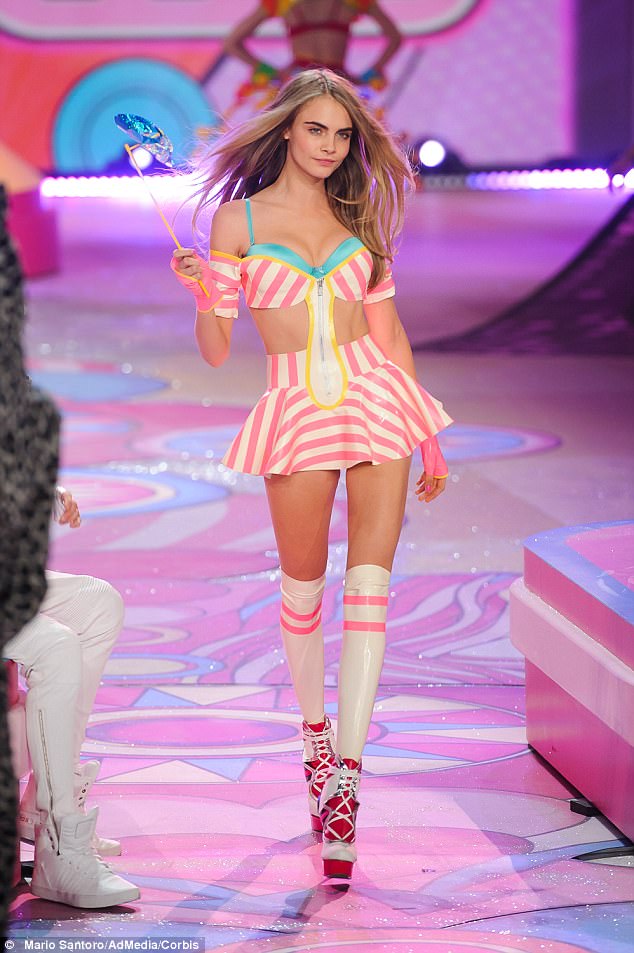 Over the last few years, whenever I have questioned top personal trainers, nutritionists or athletes on how they eat, most of them have responded not with the 5:2, the Dukan or the Blood Group Diet, but with one word: ‘paleo’.

Justin Gelband, the man who trains Victoria’s Secret models including Candice Swanepoel, Irina Shaik and Karlie Kloss swears by it and says it is the only diet that works.

Paleo is short for paleolithic which means of the Stone Age – the time period from about 2.6 million years ago to the beginning of the agricultural revolution about 10,000 years ago.

Paleolithic people or cavemen and women were considered hunter gatherers, and the bulk of their diet consisted of animals and wild plants. Existing before the dawn of agriculture, they did not eat any processed grains or dairy.

Imagine you were on a desert island with a club and a stick, and not a Tesco Metro in sight, what would you eat? Nuts, berries, green leaves, fish, meat, birds. That is paleo.

One of the most commonly used phrases to describe the diet is ‘If it doesn’t fly, swim, walk or isn’t green, then don’t eat it.’

So first things first: eating the paleo way is not new. In fact it is probably the earliest form of eating known to man, which is why it feels very wrong in a way to call paleo a ‘diet’.

I associate the word diet with weight loss, and I am pretty sure that cavemen and women did not have love handles hanging over their loincloths.

What paleo is however, is simple, fresh, unprocessed, real food, and a way of eating that is considered by many experts to work optimally with our genetics to the point where it has the power to act as a medicine.

Decades of research has shown that hunter gatherers were typically free from chronic illnesses and diseases that are epidemic in Western populations. 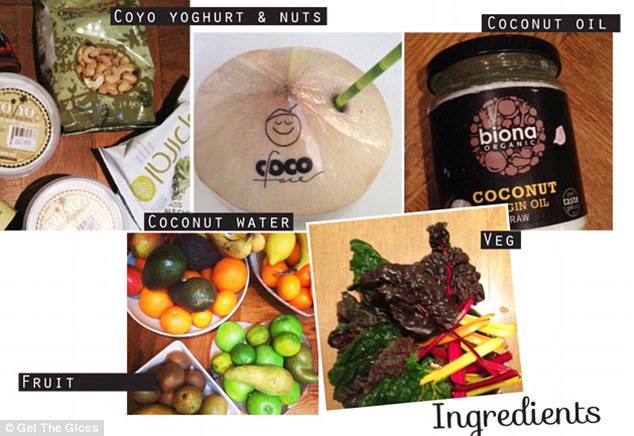 On the menu is berries, green leafy vegetables, any seafood and healthy fats, such as eggs

What can you eat?

Fruits – Preferably berries as these are lower in sugar. Nutritionists do not really advise bananas due to their high-sugar content but I ate them when I needed energy for exercise. I also ate avocado by the bucket load.

Seafood – Any. I particularly like white fish and salmon.

Nuts and seeds – Almonds, cashews, brazil nuts, walnuts etc. Not peanuts as these are a legume.

What can’t you eat?

Dairy – No cows, sheep or goats’ milk unless it is raw.

Grains – No bread, pasta, rice, corn or oats. Even quinoa is out.

Legumes – Basically any ‘dried fruit’ from a shell or pod, e.g. peas, beans or peanuts.

Alcohol – We all know what that is…

The benefits of paleo

When you learn about primal eating, you soon see that the reason nutritionists and athletes promote paleo is because it’s about eating for optimum health and nourishing every cell in your body, not depriving it in any way.

It represents a way of eating that is at the other end of the spectrum to all the refined foods, trans fats and sugar that many experts believe to be at the root of degenerative diseases today, such as obesity, cancer, Alzheimer’s, depression and heart disease.

Paleo expert Robb Wolf writes extensively about the benefits of paleo and shows many fascinating testimonials from people with all sorts of illnesses from MS to migraines, asthma to fibromyalgia, all who have benefited from eating primal and many of whom have had their illness reversed.

Nutritional expert Amelia Freer, eats mostly according to paleo principles and says, ‘I really went this way when I started finding out about gluten which is in a lot of grains. Once I removed them I felt so much more energetic and it also sorted out my long term digestive problems.’

Ms Freer also believes that being paleo can be highly beneficial not only for heart health but also autoimmune conditions such as thyroid, arthritis and type 2 diabetes, all of which she says manifest themselves within the gut. 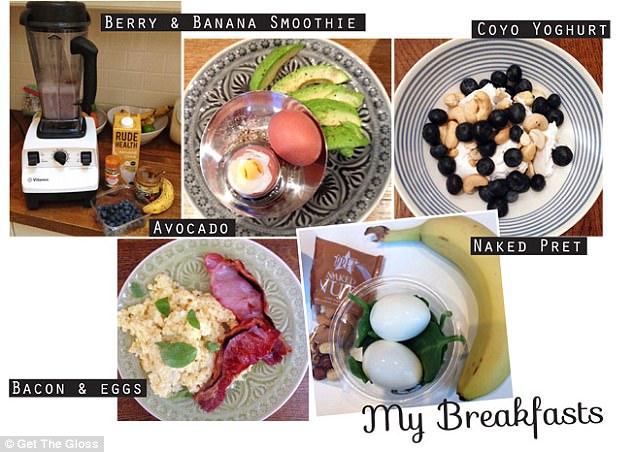 Hardcore paleo followers have fish for breakfast, but eggs may be a preferred option for most

Having eaten the paleo way for about six weeks (and having eaten a lot and never counted a calorie), it seems almost impossible to put on weight with it.

Ms Freer said: ‘You can’t really overindulge if you are eating this way, it’s about eating optimally – eating things our body is designed to digest.

‘We have all been hijacked by the food industry that we need more grains and packets of food, and it’s wrong.’

Scientifically speaking, what is happening is that when there is an absence of carbs, our body will take stored fat and burn that for energy instead in a process known as ketogenesis. This means you can eat more on paleo but potentially lose weight.

I already ate quite a low-carbohydrate diet; I rarely ate a sandwich at lunch or a huge bowl of pasta for dinner.

Cutting out grains therefore was not really the issue for me (although I can imagine if you ate a high-carb diet and suddenly switched to paleo it would be much tougher).

For me it was the dairy that was hard – I gave up my beloved lattes the first week and as a result felt shocking with very low energy; my body and head felt like lead. This may have been the caffeine withdrawal but you also forget about the sugar that’s in milk (lactose is a sugar).

As I exercise three to four days a week, I realised that I probably was not taking in enough good calories. After speaking to personal trainer Steve Mellor from Freedom2Train (who is all for eating paleo), I upped my food intake and immediately felt better.

One day, after an early morning boxing session, I came home and ate three eggs and three pieces of bacon. Another day I ate an entire packet of green beans with my chicken for dinner. You really do feel as if you can eat as much paleo food as you like.

Lunch was pretty straightforward as there was a salad bar near work and I would choose chicken or fish with loads of vegetables, leaves and salad, and for dinner I would generally eat fish or meat with roasted or stir-fried vegetables (sometimes omelettes).

My biggest annoyance was buying fresh food that then goes off in the fridge and then having to buy more.

As for snacks, I mostly munched on fruit such as apples, berries and nuts – sometimes a banana if I was going training (too much sugar in it if you are not exercising).

I have also discovered Nakd bars which are wheat and dairy-free and gave me just the right amount of energy for a training session. 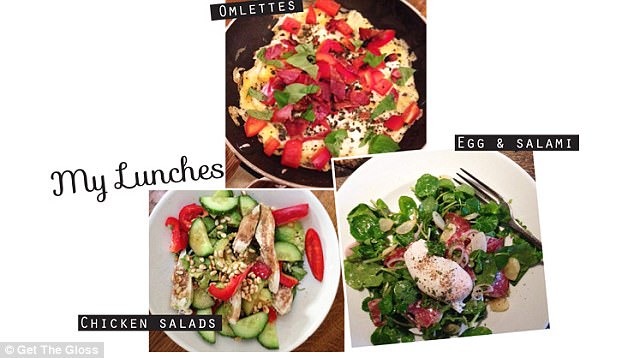 Lunches tend to be straightforward, with salads loaded with chicken, fish and vegetables

It was the breakfast options that I found hard to swallow – literally.

Really hardcore paleo eaters will eat chicken or salmon for breakfast, probably with a handful of nuts (I literally can barely stomach a cup of tea before 9am let alone fish, so this absolutely was not an option).

Coyo yoghurt has really saved my life – it is a particularly tasty, creamy, coconut based non-dairy yoghurt that no paleo eater will survive without. I would eat this with a handful of cashews, blueberries and cinnamon, which is delicious and very filling.

Breakfast on-the-go was hard too and I would often find myself in Pret-a-Manger staring at the shelves trying to find something I could eat (wraps, porridge, those breakfast bowl pots with berry compote are all out of bounds), so I would invariably leave with two boiled eggs (they sell them in a pot) which I would have with a banana and their Naked Nuts much to my colleagues’ horror.

I have to admit that eating boiled eggs at your desk is pretty grim – this is when food became totally functional and not much of a pleasure.

Areas I failed at

If you are a die-hard paleo fanatic you should not drink milk (unless it is raw or unpasteurised, e.g. straight from the udder), and while I cut out the lattes, I just could not stop having milk in my tea – it is a habit of a lifetime I am not willing to break.

Other areas where I cheated? Dark chocolate – every day at night bar none. Oh and white wine (sometimes a gin and tonic) every Friday and Saturday without fail. 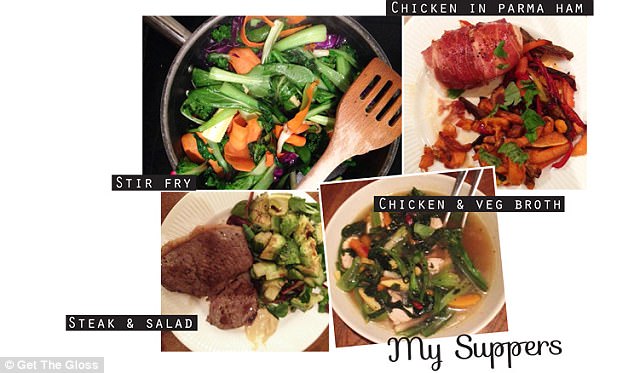 What results did I see?

If I may say so myself, my skin looked pretty darn good.

While I’ve never had acne, I would normally have some sort of spot on-the-go. Any bumpiness totally disappeared – it’s almost as if my skin had been cleaned from the inside out. Somehow the pores even looked cleaner.

The experts reckon this was down to the fact that I was not just eating macronutrients – the big blocks of proteins, good fats and carbs – but the micronutrients too – the fibre and nutrients that are essential for great skin and cellular repair.

As for my body, I read a quote from Hollywood paleo eater Jessica Biel that said, ‘It just leans you down and slims you up and takes that little layer of fat, skin and water-weight right off your body’.

I don’t own any scales but I fit into a smaller dress size and definitely felt much leaner and firmer – it is as if everything has been cleaned out and sucked in.

Another strange side-effect was that my senses were heightened dramatically. Herbs and spices became a taste sensation. Apparently, according to Amelia Freer, this was not unusual.

She said: ‘I had to change my perfume when I went Paleo, my sense of smell particularly changed!’ 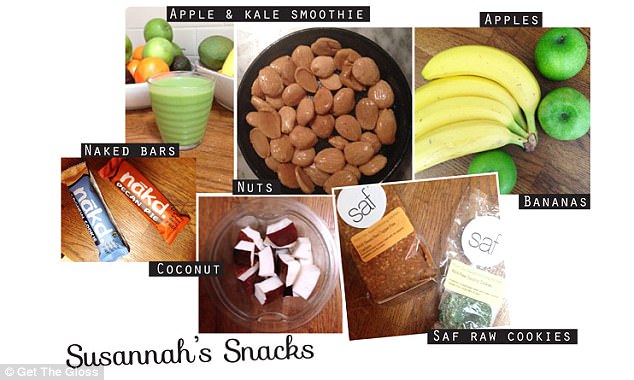 Bananas are normally too high in sugar to be included, but are fine providing you exercise

Would I carry on?

I will continue to eat as cleanly as I can – I think cutting out all processed food is the way the world will have to go in order to cure disease and prevent obesity.

My advice though is to cut back a food group at a time – start with cutting back on grains first and then dairy as it is a big deal doing it all at once.

Do not think however that I will be doing Paleo to the point of extremism – if I go to a friend’s house and they serve up pasta or potatoes I will not refuse it, and I will continue to go and drink wine at the weekends, eat chocolate brownies and add some parmesan onto my salads.

I may be eating paleo, but it doesn’t mean I’m perfect.