The Caymans are more than tax breaks with wildlife, history and rum

Prince Charles and the Duchess of Cornwall’s whirlwind Caribbean tour this month showed off top holiday spots in St Lucia, Barbados, St Vincent and the Grenadines, St Kitts and Nevis, and Cuba.

But their final stop was perhaps not so familiar: the Cayman Islands.

This tiny British Overseas Territory, most notable as a tax haven, has not traditionally been high on our list of Caribbean getaways – but it’s definitely time to think again. Here is everything you need to know about the three principal islands: Grand Cayman, Cayman Brac and Little Cayman.

By George: The waterfront at George Town – the capital of the Cayman Islands – seen from the water on a sunny afternoon

Most holidaymakers head to the 22-mile-long, eight-mile-wide island capital and check in to one of the plush resorts on Seven Mile Beach. The long, thin strip of pristine white sand is the place to take in marvellous sunsets and it buzzes with cocktail bars, seafood restaurants and jerk chicken joints. But there’s plenty to explore beyond the beach – starting with the island’s coloured iguanas.

Grand Cayman is home to critically endangered species of native blue iguanas, which now thrive at a conservation centre in the Botanic Gardens. In the 1980s, there were only two dozen left but, thanks to conservationists, a thousand of these fascinating reptiles now roam in the wild and 120 are at the gardens, where you can walk among them on an iguana safari. 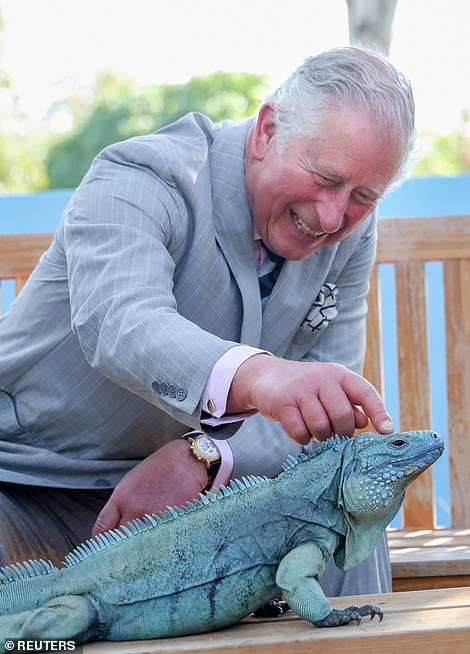 The prince of scales: Prince Charles meets a blue iguana – an endangered species – during his visit to Grand Cayman. Just as well it wasn’t a Camilla-an

Iguanas are not the only creatures for which Grand Cayman is renowned. Stingray City may sound like a tacky theme park but it’s what locals have dubbed a remote sandbar reached by boat, where hundreds of stingrays have congregated for years. Why? This was where fishermen went to gut their daily catch. Now stingrays brush by harmlessly as tourists wade along the sandbar, although the sensation of having the fish, which can grow to almost 6ft wide, flap past your ankles is quite disconcerting at first.

Grand Cayman is a real hub for divers – it boasts more than 200 sites, including the evocatively named Dragon’s Lair, Killer Pillar and Barrel Sponge Wall.

Most hotels offer dive packages and boat trips if you just want to snorkle to marvel at shoals of colourful reef fish (captainmarvins.com). You might also be lucky to spot turtles, an octopus or two, or even a hammerhead shark.

Hire a car to explore the eastern side of the island, where little wooden homes owned by fishermen have hardly changed in half a century and offer a stark contrast to Seven Mile Beach’s sleek hotels.

Back on the west coast, if you’re exploring the slightly dilapidated capital, George Town, choose a day when no cruise ships are docked (or you’ll be mingling with 15,000 tourists). Here, statues of national heroes fill the main square next to a monument commemorating King George V and a post office with post boxes featuring the Queen’s Royal seal.

Early diners who want to watch the sunset can take advantage of the seafood restaurants and bars with names such as Da Fish Shack. Elsewhere on the island, there are plenty of fried snapper and chicken joints – try Heritage Kitchen in West Bay or the Grapetree Cafe in Bodden Town. And don’t forget to visit Rum Point, with its beach and barbecue stalls. 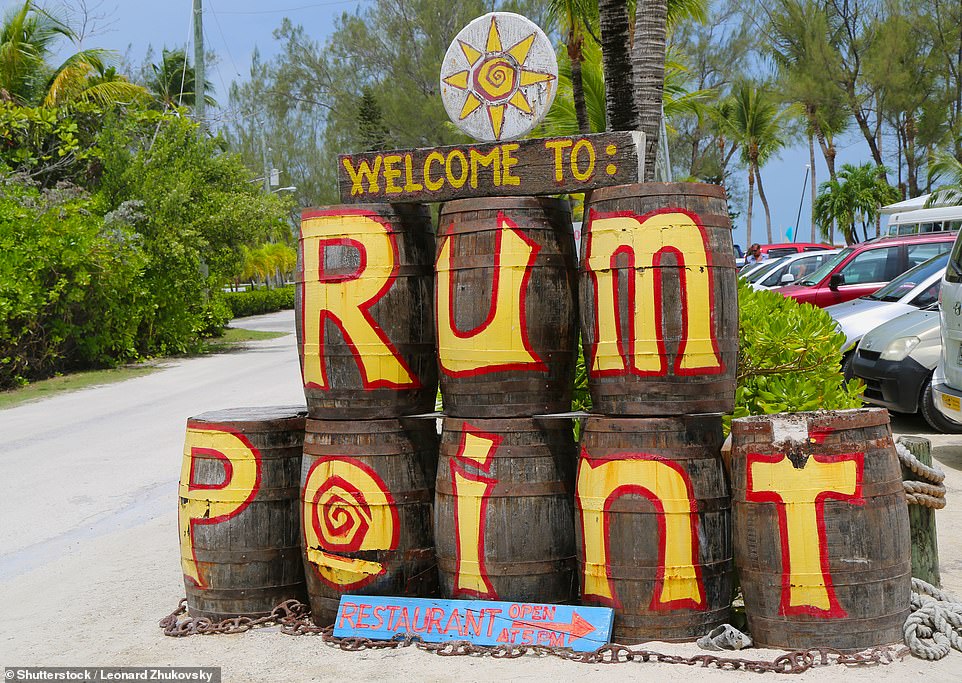 A rum deal: Rum Point, on Grand Cayman – the largest of the islands – offers access to a beach and barbecue stalls

Give me culture: The first-rate National Gallery, in a modern building full of striking art, has free admission (nationalgallery.org.ky).

A little bit of history: Learn about slavery on the island at Pedro St James (pedrostjames.ky) – the place where its abolition was announced in the 1830s. Find out about the island’s British settlers at the Cayman Islands National Museum (museum.ky).

Foodie heaven: For fantastic spicy dressed crab and jerk chicken, head for Pepper’s Bar & Grill on West Bay Road, where there’s dancing most evenings (peppers.ky). If you’re a fan of rum, book ahead for the 45-minute tour of the Cayman Spirits distillery in George Town. It costs £11pp (caymanspirits.com).

Blow the budget: Kimpton Seafire is a stylish new five-star resort on a quiet spot at the West Bay end of Seven Mile Beach. Doubles cost from £330 a night (seafireresortandspa.com). 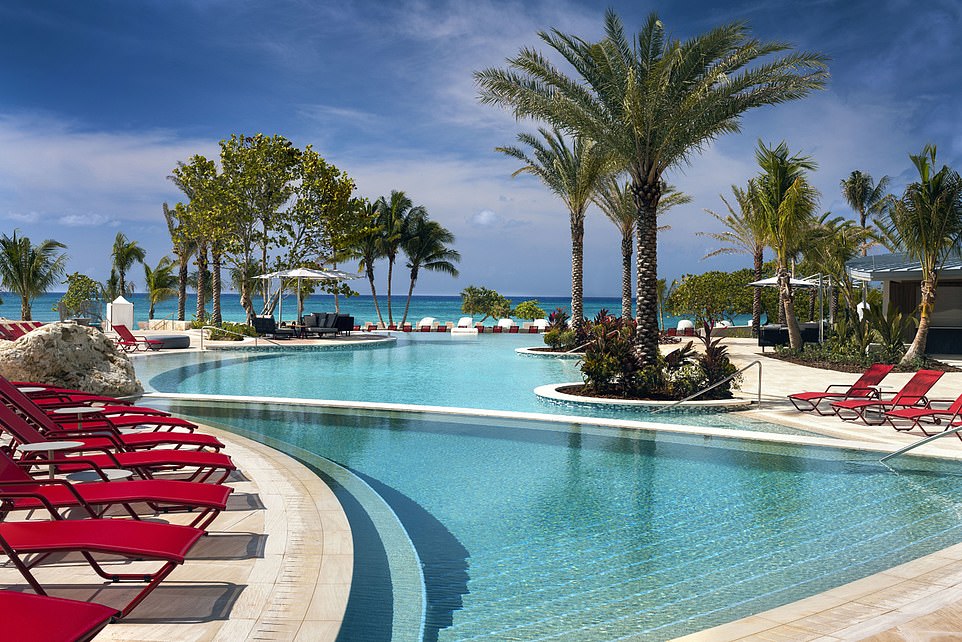 Seven Mile itch: For those with cash to splash, the new five-star Kimpton Seafire resort is on a quiet spot at the West Bay end of Seven Mile Beach, Grand Cayman. Double rooms cost from £330 a night. Its pool area is shown above

On a budget: Tucked away by a pretty section of the middle of Seven Mile Beach, Comfort Suites has simple rooms from about £210 a night (choicehotels.com).

IT’S a half-hour flight from Grand Cayman to sleepy Cayman Brac. For anyone who wants to escape the bustle of the capital and experience Cayman Islands life as it was before the hotel chains moved in, this is a winner.

It is just 11 miles long and a mile wide and has a limestone ridge running through the centre. A road winds around the foot of the ridge and up a steep hill to a 140ft cliff on its eastern edge.

If you love wildlife and photography, you’ll be snapping away at the magnificent brown booby birds and frigates soaring above.

There’s a great three-mile circular walk along the cliff and there are other routes too, which is why Cayman Brac is a hotspot for walkers and rock-climbers (climb.ky). Relaxed restaurants and bars are filled with locals and your money goes further here – it’s about half the price of Grand Cayman. 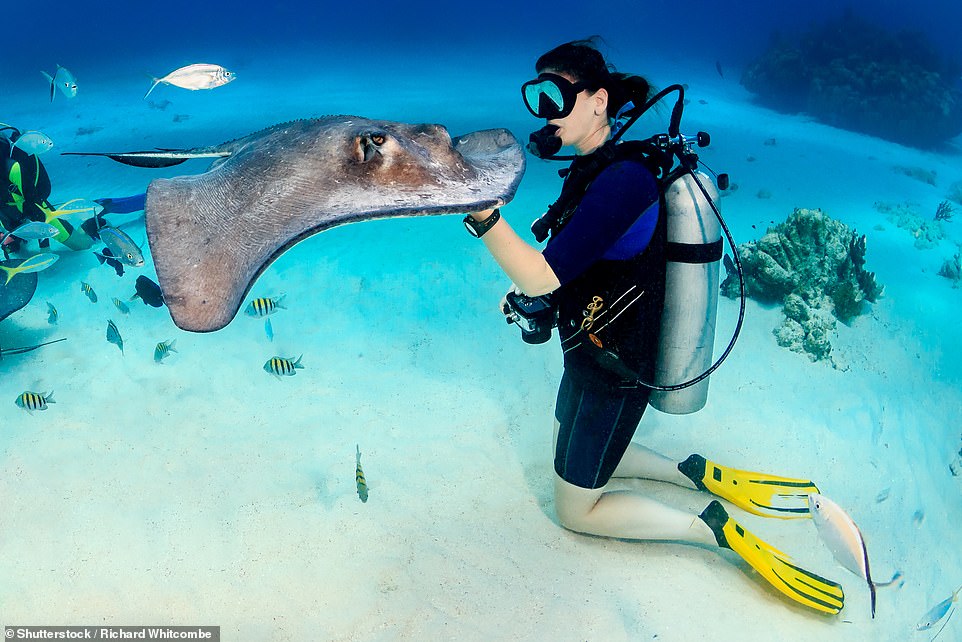 Close encounter: Stingray City on Grand Cayman is the place to spot the huge fish which are harmless but ‘disconcerting’

Give me culture: On the north coast, Cayman Brac Museum has interesting exhibits covering the days when turtles were caught for their meat. It also explores traditional house-building techniques.

A little bit of history: Take time to stop at a series of caves within the limestone ridge at the centre of the island, many of which have been used as shelter during hurricanes over the years. They’re a great place to cool off in the heat, but beware of bats lurking inside.

Foodie heaven: Not far from the museum is the Star Island restaurant – try the delicious fried mahi-mahi served with breadfruit, plantain and hot sauce. 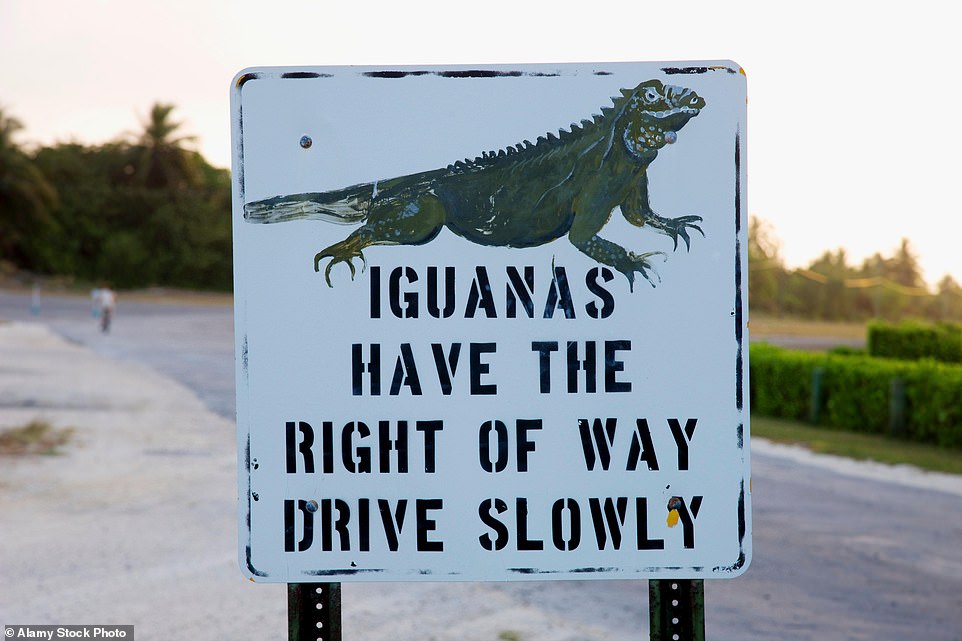 A night on the reptiles: The Caymans’ endangered species the blue iguana has right of way on the islands’ roads

Blow the budget: Cayman Brac Beach Resort has a pool overlooking a beach on the western tip of the island and has a great deal for divers; a week-long full-board stay with 12 dives costs from £1,215pp (caymanbracbeachresort.com).

On a budget: Airbnb has modest sea-facing apartments from about £95 per night (airbnb.com).

Hollywood stars come here to escape the limelight – Johnny Depp dropped by recently. You can understand why: this island is even more secluded than Cayman Brac.

It’s just to the west of Brac and slightly smaller, with a handful of hotels facing white-sand beaches protected by reefs. It’s a 30-minute flight from Grand Cayman, with a maximum of eight flights a day on planes that seat 16.

Little Cayman is popular with birdwatchers and divers. One of the best dives in the Caribbean – Bloody Bay Wall – is just off its north coast. Birdwatchers come to track red-footed boobys.

Hire a moped to explore the interior but watch out for iguanas, which roam freely and often bask on the narrow roads (scootenscooters.com). For a memorable excursion, take a kayak out for a picnic on Owen Island, a beautiful deserted island within the reef (southerncrossclub.com).

Give me culture: Visit Little Cayman Museum (littlecaymanmuseum.org) and find out about life when fishing, not tourism, was the main source of employment here.

A little bit of history: The Central Caribbean Marine Institute was established in 1998 (reefresearch.org). Tours of its HQ can be arranged to learn about measures to protect reefs. Prince Edward, who has visited Little Cayman on three diving holidays, is patron. 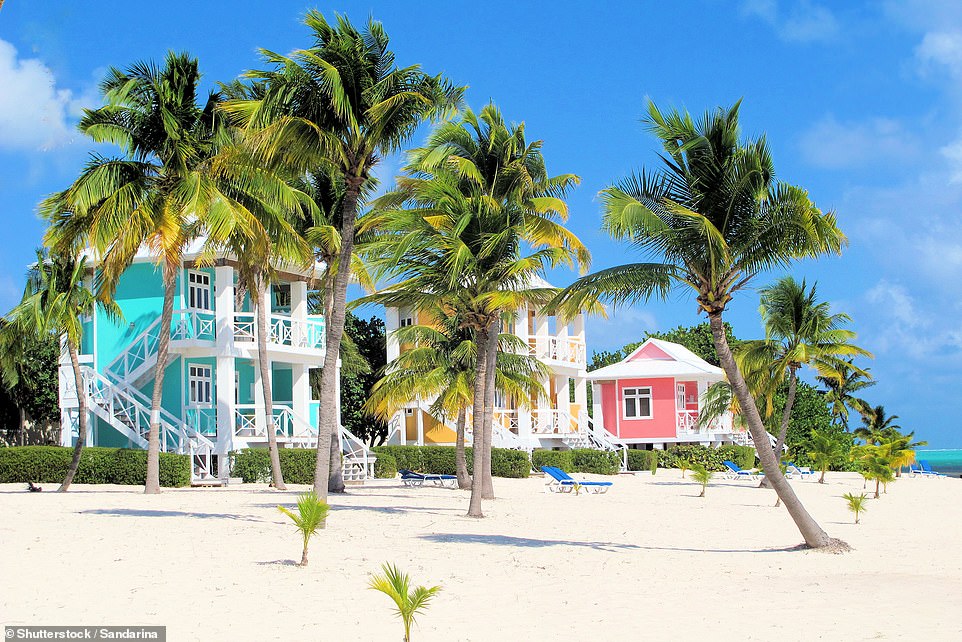 Beachside bliss: The Southern Cross Club lines the shore in Little Cayman and offers a three-course menu at about £25 which includes dishes such as split pea soup, fresh snapper, salads, fried plantain and mahi-mahi. A five-night stay costs £2600pp

Blow the budget: This is special-occasion territory – the ten rooms at the Southern Cross Club are super-luxe, with ceiling fans, terraces facing the incredible turqouise sea and great sunset views. A five-night stay on a full-board basis costs from about £2,600pp.

On a budget: With a dozen sea-facing apartments, each with a barbecue terrace, Paradise Villas live up to their name (paradisevillas.com). They cost from £121 per night.