The Changing Of The Guard review: It is an uncomfortable read

The Changing Of The Guard

The British Army, according to journalist Simon Akam, went into the ‘wars of choice’ in Iraq and Afghanistan convinced that it was ‘the best little army in the world’. It came out of them, he says, with its reputation diminished, both in its own estimation but also – and importantly – in the view of our American allies whom, embarrassingly, we had hubristically denigrated at the start of the Iraq operation.

There is little doubt that ultimately the British military failed badly in Iraq by ceding control of Basra, in 2007, to the sectarian Shia militias that we had hitherto been fighting.

It took an operation – ‘Charge of the Knights’ – by the poorly regarded Iraqi security forces and their US advisers, in the spring of 2008, to regain control of the city. This was the nadir, but there had been some successes earlier in the campaign, political rather than military, before the population began to realise that we simply didn’t have the resources or the will for the amount of reconstruction that the infrastructure and civil society of southern Iraq required. 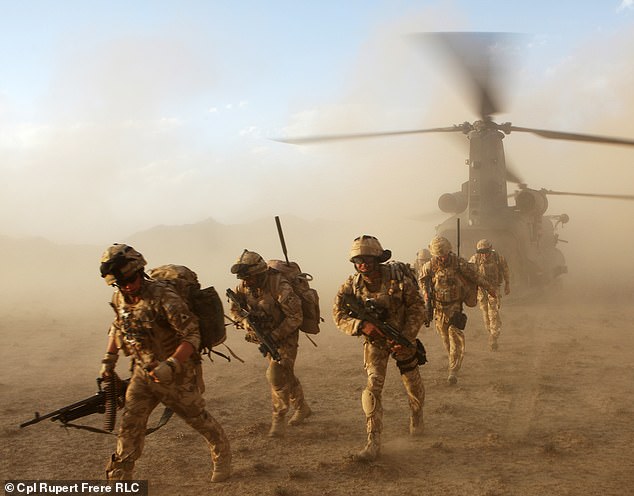 The British Army went into the ‘wars of choice’ in Iraq and Afghanistan convinced that it was ‘the best little army in the world’ (above, British soldiers in Afghanistan in 2009)

Afghanistan was little better. Until 2006, the relatively small contingent of UK forces had been focused on Kabul and the north of the country, which was a relatively permissive environment.

Helmand was a different matter. It has been persuasively argued – and Akam rehearses the argument here – that what we had stepped into was not an insurgency but a decades-old tribal and civil conflict that neither we nor the Americans understood and in which the Taliban were, at first, only bit players.

Ultimately our involvement enabled the Taliban to gain influence, power and a leadership role that it had not previously had. 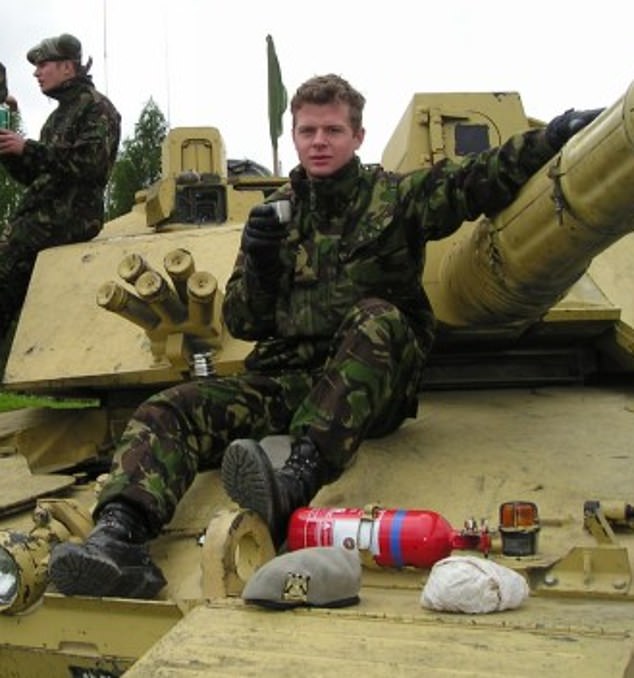 It has been persuasively argued – and Simon Akam (above during his army days, 2004) rehearses the argument here – that what we had stepped into was not an insurgency

The consequence, of course, was that lives were lost, many more were blighted by injury, and a vast amount of money was spent to no apparent benefit. There has been a moral cost too.

Since the early stages of the Iraq War, rumours have continued to surface of abuses by British personnel in both Iraq and Afghanistan. While many of these were demonstrably false, some were not.

Akam also covers the ‘lawfare’ (legal actions directed at soldiers) conducted by Leftist lawyers like Phil Shiner, which has cast a shadow over the lives of many military personnel.

But perhaps if we learn the lessons from these failures, we can at least claim some mitigation? Maybe so, but Akam claims that the Army has been more interested in covering up failure than learning from it.

Indeed, this book has had a difficult gestation. The original publisher seems to have developed cold feet about the project as it was approaching completion, necessitating a switch, and there is some evidence that this was a result of pressure from people close to the military.

The defence establishment, he claims, is averse to learning the real lessons of its failures; in fact it rewards them – or some of them anyway – with promotions and honours for the perpetrators.

There is a counter-argument to this. The choice the UK made in deciding to get involved in Iraq and Afghanistan was a hard-nosed one focused on maintaining influence in a complex world and, in the case of Afghanistan, of preventing the return of a regime that had no qualms about sheltering the perpetrators of 9/11 and other terrorist atrocities.

And while it became evident that the task in both Iraq and Afghanistan was ultimately beyond our resources, the US fared little better, despite the mass and material superiority of their armed forces.

Yes, the US tidied up after us in Basra and in Helmand, but they didn’t go on to win. There is clearly a lot of learning to be done all round.

And the Army would argue that it has tried to learn lessons. Not necessarily through public lamentation and breast-beating but by the development of doctrine and the assimilation of new ideas and concepts.

Akam, whom I know and spoke to for this book, implies that there has been a ‘take the money [or medals] and run’ attitude among the Army’s senior leadership, but that isn’t something I’ve seen and it would surprise me if any of the commanders I knew and worked with during my Army career had been anything other than profoundly affected by what they went through in Iraq and Afghanistan.

The Changing Of The Guard is an uncomfortable read, deliberately controversial, and many will disagree with Akam’s conclusions, but it is important that arguments like his are given a proper airing.

It’s compellingly written – I got through all 500-plus pages in two sittings – and it is certainly worth the effort.

Oddly enough, when all the dust has settled, there is still a very strong argument that the British Army is ‘the best little army in the world’ but Iraq and Afghanistan have reminded us that – as the saying attributed to everyone from Napoleon to Stalin has it – ‘Quantity has a quality all of its own’ and we ignore this reality at our peril.

Adrian Weale is a historian and former Army officer.