Pitta-ful performance! The Chase contestant is mocked by viewers for getting a question about bread wrong – after revealing she runs a sandwich shop

A sandwich shop owner who appeared on The Chase yesterday was mocked after getting a question about bread wrong.

Debs, 61, from Hampshire, told how she serves between 1,500 and 1,600 customers a week from her store, where regular visitors are fans of their ‘foot-longs’.

The keen ten-pin bowler, who claims she represented England in 1992 at the European Gold Cup, said she was keen to book another holiday to Florida if she managed to take home some cash.

But sadly her hopes were dashed when she was caught by Chaser Paul Sinha, after making a rather embarrassing blunder.

Sandwich shop owner Debs, 61, from Hampshire, appeared on The Chase yesterday but was mocked after getting a question about bread wrong

Having notched up £3,000 in the cash builder round, Debs was faced with a question about bread, which host Bradley Walsh couldn’t help but giggle at.

Asked: ‘The dip humous is usually served with which of these breads?’, Debs opted for ciabatta over pitta and brioche.

She admitted she was ‘not sure’ if she was correct, to which Bradley asked incredulously: ‘You work in a place, no, hang on, you don’t just work, you actually own the place that makes the bread with the subby-type things that has fillings in it, you must know which one goes in it? You’ve got absolutely no sense of hummus.’

Debs replied: ‘I don’t actually make the sandwiches!’ before it was revealed the correct answer was pitta. 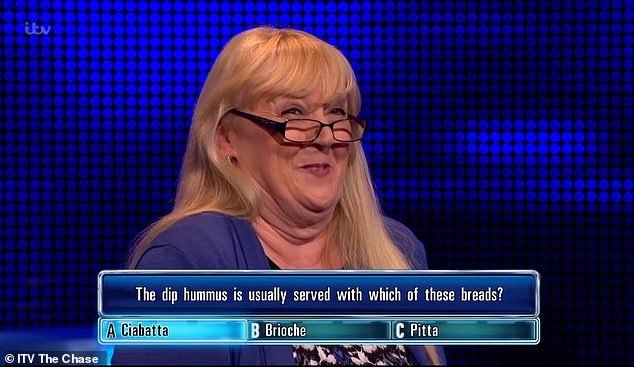 After notching up £3,000 in the cash builder round, Debs was faced with a question about bread, but answered incorrectly 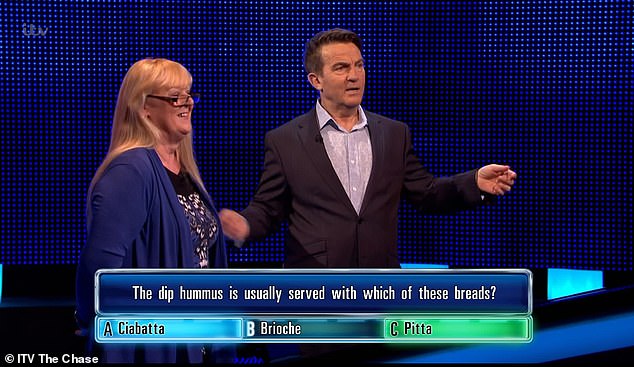 The Chaser answered correctly, and managed to catch Debs before she made it safely home, putting her out of the game.

Viewers at home took to Twitter in their droves to tease the contestant for failing to gain points in what should be her specialist subject.

One tweeted: ‘What sort of sandwich establishment is this joker running if she doesn’t know what bread is served with humous?’

Another asked: ‘And she owns a sandwich emporium?? FFS!!’

And one couldn’t resist a pun, writing: ‘I pitta anyone who buys a sandwich from Debbie’s Underpass sandwich shop!’

The Chase airs weekdays on ITV at 5pm.