The chef who says you can eat to beat BRAIN CANCER

He has worked all over the world, trained under Raymond Blanc and Gordon Ramsay and, at 32, was running his own restaurant in Melbourne, Australia, serving 200 or more diners a night.

So it seems appropriate that when all this was up-ended by a brain tumour, it was food he turned to as medicine.

John is convinced a radical overhaul of his diet has helped him recover since his tumour was operated on in 2015.

Survivor: John Lawson, 35, of Leigh-on-Sea, Essex, was diagnosed with cancer in 2015

He now follows the strict ‘ketogenic’ diet — where you eat very little carbohydrate but a lot of fat — to ‘starve’ a tumour of the food it needs, sugar.

In John’s case this has meant organic, grass-fed meat, butter, omega-3-rich vegetable oils, fresh fish and no sugar — except sharp fruit such as blueberries.

‘It’s been a massive part of my recovery,’ says John, now 35 and running a restaurant in his home town of Leigh-on-Sea, Essex, where ‘all food is cooked with health in mind’. Yet in spring 2015, John was confined to a hospital bed, unable to recall how to make a cup of tea.

He’d had a seizure and collapsed as the result of a cancerous astrocytoma — the most common primary brain tumour. ‘My girlfriend at the time found me on the floor, fitting,’ says John. ‘I came round, confused, in the ambulance. At the hospital they did a scan, and straight away saw a “cloud” on my brain.’

Brain tumours are the biggest cancer killer of people under 40. Every year around 11,000 are diagnosed and 5,000 die from brain cancer — and the numbers are rising.

Earlier this year a major study reported in the Journal of Environmental and Public Health found the number of malignant brain tumours known as glioblastoma multiforme (a faster growing version of the cancer John had) diagnosed each year has doubled since the mid-Nineties. 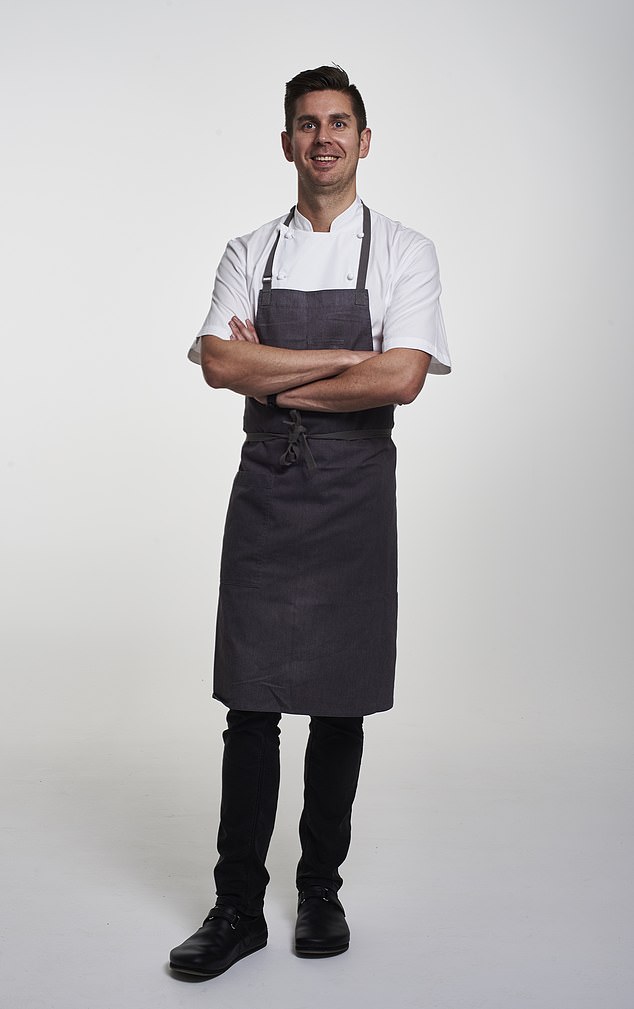 You are what you eat: John is convinced a radical overhaul of his diet has helped him recover since his tumour was operated on in 2015

‘Primary brain tumours — tumours that start in the brain rather than spreading there from elsewhere in the body — are increasing,’ confirms Kevin O’Neill, a consultant neurosurgeon and head of the brain tumour clinical service at Imperial College Healthcare, London.

‘And we think it goes beyond the fact we’ve got better at detecting them.’ The trouble is, there’s not much evidence for a particular cause. The only well established risk factor is exposure to medical radiation, but this accounts for just a small number of tumours.

‘Most people assume brain tumours are rarer than they are,’ adds Wendy Fulcher, co-founder of the Brain Tumour Research Campaign. ‘They don’t realise how little is known of what causes them, and how difficult it is to treat them.’

For weeks, I was bedbound. I couldn’t recognise my family. I knew inside who they were, but I couldn’t find the words.

Not only is surgery to remove brain tumours difficult, given their sensitive location, but the cancerous cells tend to be heterogeneous, meaning they vary widely, so newer treatments that target particular cells, such as immunotherapy, haven’t had the same success seen in other cancers, says Mr O’Neill.

However, a growing area of interest is how lifestyle changes — including a diet like John’s — can help. Such changes may be particularly useful in brain tumours, says Mr O’Neill.

After the scan, John’s doctors performed a biopsy to identify the tumour. But during this a blood vessel was hit, causing a stroke. ‘I was unable to speak, my memory had gone,’ he says.

‘For weeks, I was bedbound. I couldn’t recognise my family. I knew inside who they were, but I couldn’t find the words.’

Weeks of painstaking rehab followed, as John learnt to talk, read and write again. His tumour was low-grade — not immediately life-threatening — but he would need surgery. 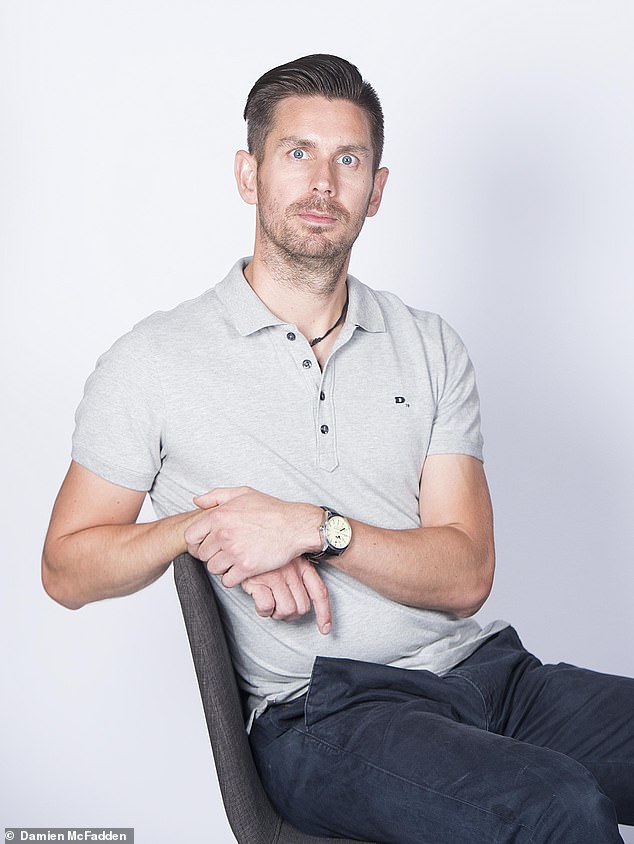 Discovery: While running his own restaurant in Melbourne in 2015, John had a seizure and was subsequently diagnosed with a the potentially-fatal tumour 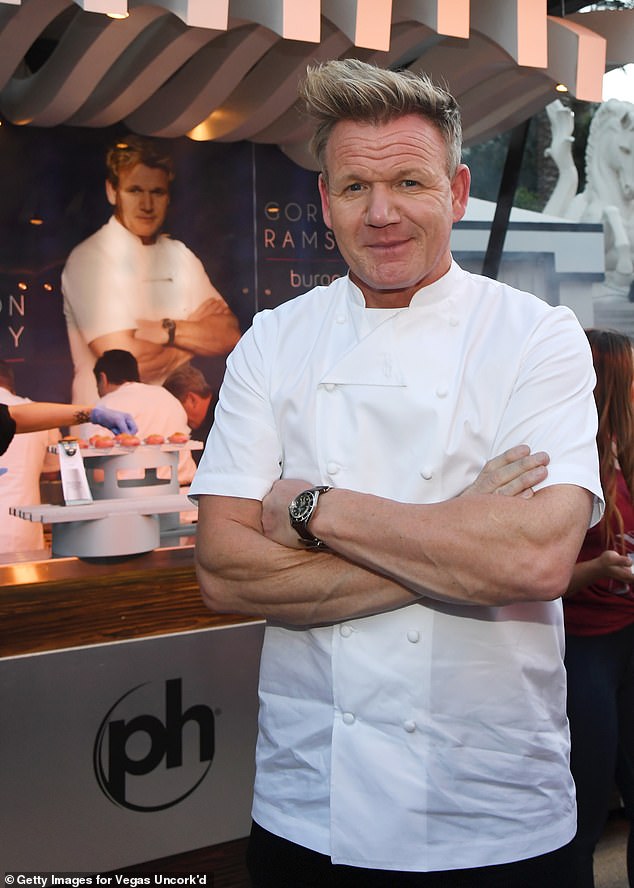 Learned from the best: Gordon Ramsay was one of the top chefs who trained John

‘They did say I could wait, but I would need an operation at some point. Straightaway, I thought, “I need to get this done”,’ recalls John.

‘I couldn’t have this thing in my brain, like a timebomb. I asked what I could do to give myself the best possible chance of recovery, and my consultant said to have a healthy lifestyle. From then, that was my focus. Although I knew good food, I’d never thought about nutrition before. I started reading everything I could. Out went fried and processed food. Then I read about the ketogenic diet.’

This diet is thought to starve tumours of energy. ‘Tumour cells are programmed to grow fast and they need lots of energy to do this — preferably glucose,’ says Mr O’Neill, who is beginning studies involving brain tumour patients on the diet. Without glucose to burn, the body uses ketones, from fat.

And there is already evidence the ketogenic diet can affect brain chemistry — the NHS recognises it helps prevent seizures in children with epilepsy for whom drugs have failed.

‘Changing the body’s energy source to ketones seems to produce changes that calm the brain down,’ says Mr O’Neill.

‘Many people with low-grade brain tumours present with epilepsy, so it may control that — and from animal studies we know the ketogenic diet may affect tumour growth.’

Mr O’Neill emphasises that the diet should be seen as an adjunct to conventional treatment with chemo and radiotherapy — not an alternative. Preliminary research suggests a dual approach may work. 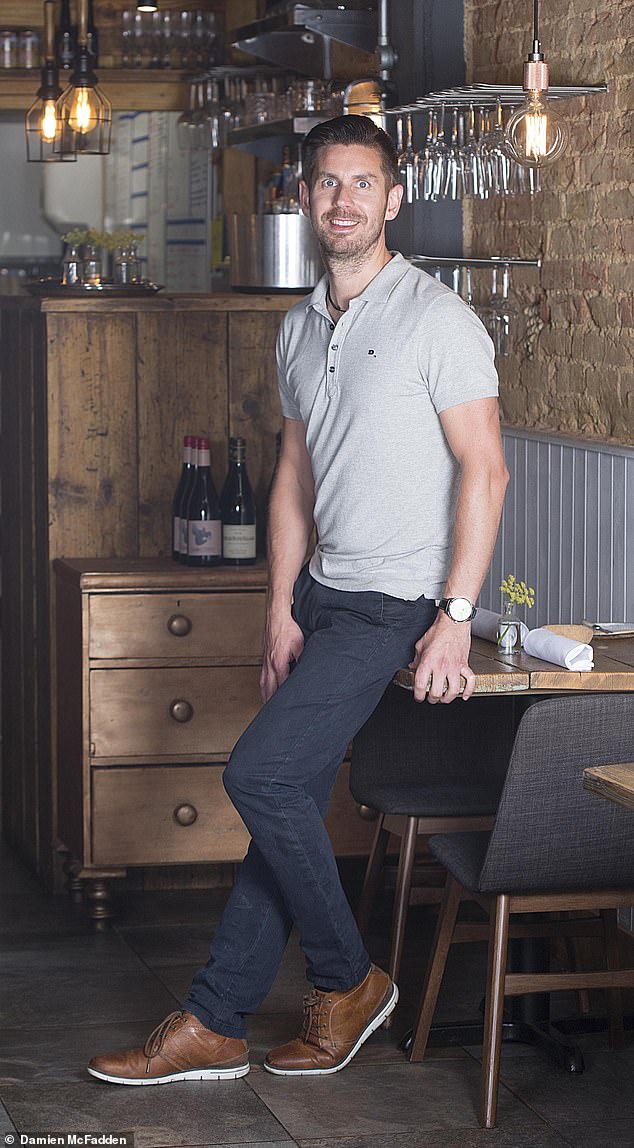 Success: John now runs his own restaurant in Leigh on Sea, where he combines his interest in healthy food with high-end dining

‘In studies in mice, we’ve shown if you combine a ketogenic diet with radiotherapy you can knock tumours out completely,’ says Mr O’Neill.

‘I don’t yet advise all my patients to do it, as it’s not yet proven in humans. But there is no harm in trying it.’ As well as the diet, John now works out, practises yoga and meditates. It is, he says, a far cry from before his seizure, when 16-hour days were typical, as was convenience food and nights out drinking.

Experts emphasise there is no evidence brain tumours are linked to anything people do. But John says: ‘I’m convinced it was partly due to my lifestyle.’

Five months later, he had recovered enough from the stroke to be fit for surgery. It went well, and John was back working at the Melbourne restaurant within the month, though eventually returned to the UK to be closer to family.

Three years on, he no longer needs anti-seizure medication, and the cancer hasn’t recurred. ‘At my last six-monthly check-up, they said, “Whatever you’re doing, keep doing it”, ’ he says.

This Saturday at his restaurant, Food By John Lawson, he is serving a special ‘brain food’ menu prepared with Raymond Blanc, Ollie Dabbous and Robin Gill. Each will create a seasonal dish free from gluten, dairy and refined sugar, with ingredients thought to aid brain function. All profits will go to the Brain Tumour Research Campaign.

‘It’s not just a load of weird grains and quinoa,’ says John. ‘It’s still comfort food, substantial and full of flavour — I do a lot of slow-cooking. I want to use my experience and my expertise as a chef to raise some money and awareness of this dreadful disease, and of the difference food can make.’

The ‘Brain Food’ dinner is on October 27: foodbyjohnlawson.com/brainfoodevent

Find out more about the Brain Tumour Research Campaign on its website.