Tucked away in a Warrington back street is a shabby, red-brick warehouse, distinguished only by the pair of imposing steel doors designed to deter unwanted visitors.

This is no ordinary storage unit. Its real purpose is only hinted at by the regular trickle of young men with sports bags, cropped hairstyles and fashionable trainers who come and go at all hours.

They could easily be taken for young squaddies heading for the gym. Some of them are, indeed, members of our Armed Forces, and the unit is used regularly for combat training.

But the training has nothing to do with the British Army. This is to all intents and purposes the headquarters of National Action (NA), the Far-Right extremist organisation banned by Home Secretary Amber Rudd last December.

When news broke this week that four serving soldiers had been arrested on suspicion of being members of NA, many were shocked. 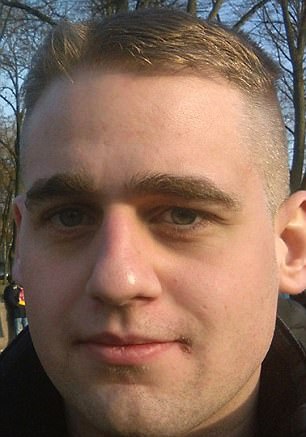 Those of us who have followed these extremists since the group’s inception in 2014 know that its followers are a new breed of extremist; often smart, middle-class graduates and, extraordinarily, including educated young women.

When Parliament declared NA to be a proscribed organisation, it joined groups such as ISIS and the IRA.

But NA’s leaders had been preparing for the ban for some time, and it has simply slipped underground and subsequently splintered.

Sources who know the group well have told me that at least eight NA members applied to join the Army more than a year ago, seeking to exploit the patriotism of those who join the Forces and recruit them to the cause. How many were successful is unclear, but it is understood that those arrested this week were already signed up to NA before enlisting.

West Midlands Police said they were detained on suspicion of being concerned in the commission, preparation and instigation of acts of terrorism, as well as being members of NA.

So how does NA continue to operate, and even maintain a base, in the face of the ban? The group now uses three interchangeable titles: Scottish Dawn, NS131 and the National Socialist movement. But the goals of these groups are identical, so it is worth reflecting on the actions which stung the Home Secretary into making NA the first proscribed Far-Right group in Britain.

The ban came just weeks after a small regiment of uniformed neo-Nazis from NA marched through Darlington, County Durham, while their leader bellowed through a megaphone that they should ‘rise up to reclaim your country from the vile aliens stealing it from you’.

Six months prior to that, 50 NA extremists occupied the steps of St George’s Hall in Liverpool for four hours, screaming ‘Sieg Heil’.

I have spent 18 months investigating NA, interviewing ex-members and many others in the Far Right, as well as sources in the security services and anti-fascist groups who are increasingly concerned about their agenda.

Those who, like me, probe their activities face threats and abuse by members of the Far Right who assume we must be part of the ‘Jewish conspiracy’ that so enrages them. 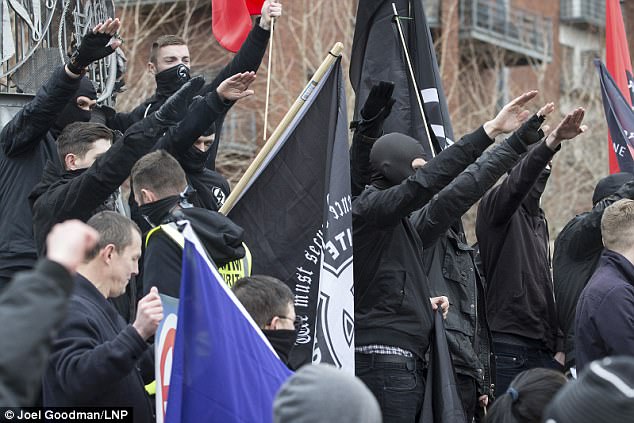 While the organisation may be small, its beliefs are terrifying. It was formed in 2014 by Ben Raymond — a 28-year-old former double-glazing salesman from Bognor Regis, who gave a speech on the steps of Liverpool’s St George’s Hall about gassing the enemies of National Socialism — and fellow university graduate Alex Davies, 21.

Davies says he was inspired to set up NA after reading the diaries of Joseph Goebbels, Hitler’s minister for propaganda, while he was at Warwick University. As he told one NA gathering: ‘Just like in the Thirties, we have a movement — that’s what we are becoming — that will see this country revived.’ He lives with his middle-class parents in Swansea.

Before the ban there was a policy of targeting young people and at least 12 university campuses were canvassed by NA. The social media operation was slick and appealing, with a high-quality website, endless YouTube videos and a Twitter feed.

Meanwhile, activists attended training camps to be schooled in combat. (Some of these camps, it should be noted, were led by an ex-serviceman.) Violence, not electoral success, is the aim of this ‘nationalist youth movement’. From Raymond’s interviews, it’s clear the group aims to foment an out-and-out race war — one of their followers has been jailed for attempting to decapitate an Asian dentist.

I have seen messages of congratulation Raymond has sent out to his troops for their achievements. As well as the attempted decapitation, these include inciting racial hatred and bombarding a Jewish MP with thousands of anti-Semitic messages. 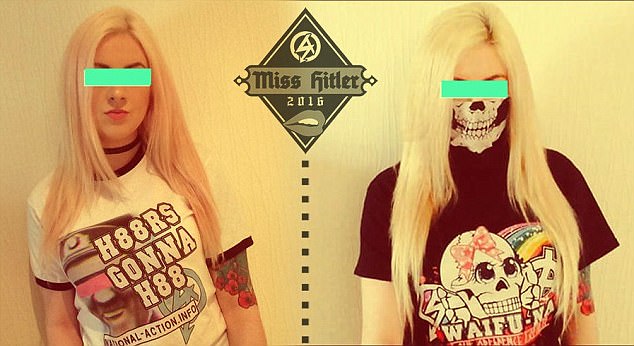 Those of us who have followed these extremists since the group’s inception in 2014 know that its followers are a new breed of extremist; often smart, middle-class graduates and, extraordinarily, including educated young women

Uncowed by the prohibition of NA, Raymond has said: ‘You can outlaw a brand but you can’t outlaw an idea.’

Between them, Raymond and Davies — known as the ‘intellectuals’ of the Far Right — are endeavouring to transform nationalism in Britain into a dynamic youth movement.

Raymond, a politics graduate from Essex University with a fashionable haircut and a taste for designer sunglasses, has moved to Swansea to be closer to Davies, though it’s believed an attempt to live together in the same flat proved unsustainable. (Raymond, whose manner would best be described as direct, has intimated that he has some form of autism.)

He is fascinated by violence, as he demonstrated when posing with a Kalashnikov assault rifle for a photograph apparently taken when he met neo-Nazi groups in Finland.

It is not just talk. Raymond and Davies have already inspired acts of terror and hate. Take Zack Davies, 27, jailed in 2015 for attempted murder and ordered to serve a minimum of 14 years in jail. 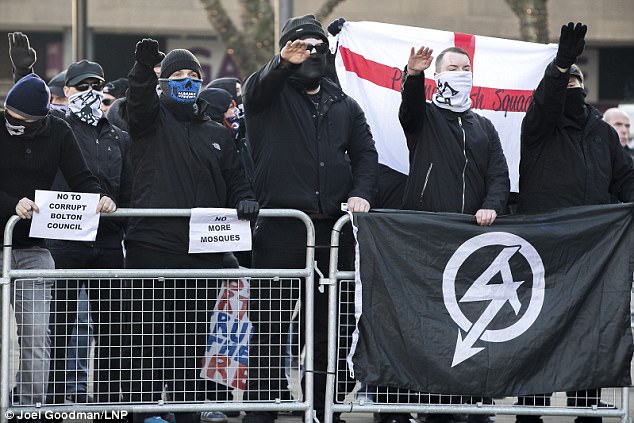 Shouting ‘white power’, he attacked Dr Sarandev Bhambra, 26, an Asian dentist from Leeds, with a machete in a branch of Tesco, leaving him with life-threatening injuries. Though NA denied any link to the crime, Davies had posed for a photo with a large knife in front of a NA flag hours before he carried out his attack.

Another prominent NA member, Garron Helm, from Liverpool, was jailed in 2014 after branding Labour MP Luciana Berger a ‘filthy Jew b***h’ 2,500 times in three days on Twitter. The 21-year-old, whose house contained a flag bearing the SS symbol, sent a tweet superimposing the yellow Star of David on the Liverpool MP’s face, referring to her as a ‘communist Jewess’.

He is seen as a martyr, with Raymond speaking of members who have ‘lost their freedom’ for the ’cause’. Sources say Helm was at a recent training camp organised from the new Warrington HQ, though judging by his unkempt appearance jail has not left him unscathed.

How have Raymond and Davies avoided arrest? Partly out of self-preservation — they had expected to be jailed for founding NA — and partly because Far-Right politics is beset by infighting and schisms. I understand the pair have stepped back from formal leadership.

Instead, Raymond has overseen a splintering of the group into a division north of the border, Scottish Dawn, and an ‘art movement’ in England called NS131. The latter claims to be anti-capitalist, but its imagery suggests it’s a fascist group. NA also operates as the National Socialist Movement.

From speeches that he gave on YouTube, now removed, it’s clear that Raymond’s masterplan is to establish a ‘National Socialist Network’ of cells without the shackles of a concrete identity. He is said to have taken inspiration from Anjem Choudary, the British Islamist who kept going for years by changing the name of his organisation.

Meanwhile insiders have told me the day-to-day work falls to NA’s new de facto leader, Christopher Lythgoe, 33, from Warrington. He runs the organisation’s Warrington HQ and is actively recruiting in an attempt to swell the NA ranks.

Distinctly camera-shy in comparison to Raymond and Davies, he is instrumental in helping NA fill the void in the nationalist movement since the BNP collapsed.

The rest of the Far Right has splintered into rival groups such as the National Front, English Defence League, Britain First, English Democrats and North West Infidels, which now seem content bickering between themselves.

But while older members of the Far Right are notorious drinkers, the youngsters of NA pride themselves on a ‘straight edge’ lifestyle — no booze, no drugs — reminiscent of the Hitler Youth. 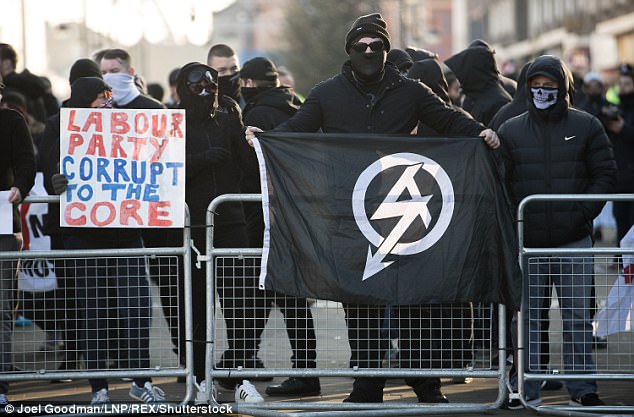 Hail victory! Or the more familiar German version: Sieg Heil. Their National Action brand may be no more — but we underestimate them at our peril

This physical prowess makes them surprisingly attractive. I have seen countless online comments from young women who say they find NA men appealing because they are fit and dedicated.

Women form a growing contingent in NA — and most appear to be university students, as shown in interviews given to the NA website before it was closed down.

Until recently, the group even had a beauty pageant: the Miss Hitler Competition. It’s Monty Python stuff — but any temptation to laugh disappears when you read interviews with the women.

‘Hitler and Oswald Mosley influenced me greatly,’ said one, while the Scottish winner in 2016, clad in a tartan miniskirt, explained she became a National Socialist when ‘the Jewish propaganda became too obvious to ignore’.

The website is gone, as are the Twitter feed and YouTube videos. But I’ve discovered NA members communicate on VK, a Russian messaging app. Users can say whatever they like, however unpalatable or illegal, with no fear of official observation. Unsurprisingly, VK is popular with paedophiles, criminals and extremists.

NA has taken advice from seasoned members of the Far Right, specifically a man called Larry Nunn. Bald and moustachioed, Nunn, who runs a website called Western Spring, was a longstanding supporter of NA and up to last year gave funds to the organisation.

While NA’s followers number fewer than 100, what’s disturbing is that it is, as Matthew Collins of anti-fascist group Hope Not Hate puts it, ‘a sign that the Far Right is evolving rapidly’.

‘This is the new Far Right. You can call them ridiculous all you like but their message inspires people to commit terrible violence.

‘When you have people wielding machetes in Tesco and screaming ‘white power’ while they try to decapitate somebody, don’t tell me these guys are harmless.’

So what does Paul Raymond have to say to his critics — to the Home Secretary who banned his organisation? ‘We are not going to let these a***holes win,’ he declared in a video message. ‘To all of you who take their duty to remain free it is my honour to call you friend. Hail victory!’

Hail victory! Or the more familiar German version: Sieg Heil. Their National Action brand may be no more — but we underestimate them at our peril.