Coinbase’s IPO is a landmark meeting between traditional finance and its new blockchain based rival: Is it the best of both worlds or an unholy union? asks ALEX SEBASTIAN

Coinbase is many people’s first point of contact with the world of cryptocurrency, particularly in the UK and America.

The exchange makes it’s much anticipated debut on the Nasdaq tomorrow and is expected to see strong demand initially. The deal comes at a particularly opportune time, with Bitcoin today breaking back through resistance at $60,000 to reach a new all-time high of over $63,000.

Notably it will be a direct listing, which means current owners of privately held shares in the company will start selling them straight to buyers in the public market. The usual order book build and underwriting of the deal by investment banks seen in most IPOs has been forgone.

Coinbase will float on the Nasdaq this week after revealing it booked revenue of $1.8bn in just three months

The float represents a tantalising opportunity for investors who don’t want to, or for regulatory reasons can’t, hold Bitcoin and other crypto assets themselves but would like to invest in the burgeoning sector.

The numbers certainly look good on the face of it. Coinbase said it expects first quarter revenues of $1.8bn with net income of $730m to $800m, generated by a colossal 56million verified users.

The emergence of Bitcoin as ‘digital gold’ has become widely accepted. The asset is sitting on the balance sheet of the world’s biggest car company by market cap, Tesla, while the City and Wall Street are increasingly embracing crypto assets.

While volatility and sharp price corrections along the way are near guaranteed, Bitcoin and crypto in general are here for good as a financial asset. There will be no putting the genie back in the bottle.

The remaining die-hard critics who consider it worthless and destined to ‘go to zero’ likely don’t understand the economics, technology and social consensus effect that now underpins it.

There is exciting potential in other crypto assets and blockchain technology as well, with the rising ‘DeFi’ (decentralised finance) industry on the Ethereum network of particular note.

For many the Coinbase IPO represents the classic ‘selling shovels in a gold rush’ play. That is to say, providing the tools to acquire an asset in demand is more lucrative than buying the asset itself.

There is certainly logic in this. Coinbase makes money whether the price of Bitcoin goes up or down. All it needs is people buying and selling as its revenues come from taking a small percentage of each trade, as well as various other fees from every user.

Clearly, the crypto market going up is better for exchanges like Coinbase as it brings in more new customers, but the firm also reels in plenty of money during a downturn.

The argument against investing in Coinbase shares appears to rest on three key factors. Firstly, there is the perennial IPO concern: has the company chosen this time to go to the market because it believes things are at a peak in terms of their fortunes, and are unlikely to get better in the short term? 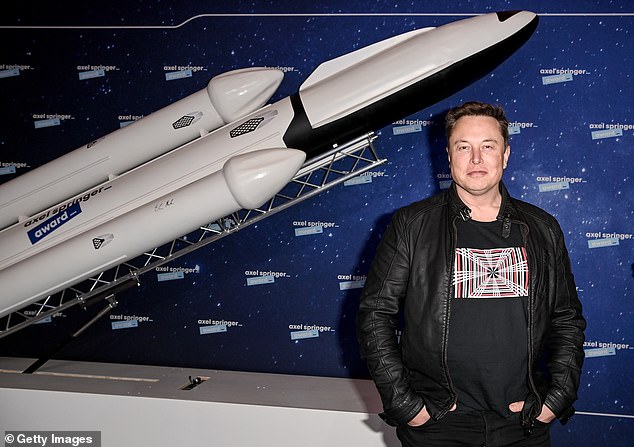 To the moon: Tesla and SpaceX boss Elon Musk is one on Bitcoin’s most famous advocates

With Bitcoin at a fresh all-time high this week of over $63,000 you could certainly make the argument Coinbase’s current private shareholders will be cashing out at a good time.

Another key criticism that could be levelled at the deal is that it is neither one thing nor the other.

It’s not a typical equity investment because the company’s fortunes are so intertwined with nascent cryptocurrency markets, and typical comparisons for key things like earnings versus share price multiples are not available.

It will be very interesting to watch how closely Coinbase shares correlate with the Bitcoin price over the coming couple of years.

Neither is it a pure play on Bitcoin and other crypto assets. To a large proportion of Bitcoin and blockchain’s advocates, the main reason they value and believe in it is that it’s forging a new separate path for finance away from the traditional markets and established monetary system.

Buying stock market-listed securities in a cryptocurrency company seems like a contradiction to some, or even hypocrisy.

The third of the issues is regulation. Coinbase has already had a brush with the SEC which delayed the IPO and triggered a $6.5m settlement over claims it was reporting transactions incorrectly.

You can be sure the financial watchdogs will continue to keep a very close eye on Coinbase during the early years of its life as a publicly listed company. Any transgressions are likely to be financially costly.

But if you are a firm pulling in revenues of nearly $2bn a quarter, you can afford to pay a few chunky fines.