The cold-blooded murder that rocked football and plunged Colombia to new depths: Escobar 25 years on

South America has provided football with its greatest icons but also suffered terrible tragedy; Chapecoense, Flamengo and the murder of Colombia’s Andres Escobar for his ‘crime’ of scoring a World Cup own goal.

Younger readers may not be aware of the massive impact Escobar’s shooting had on the global game in 1994 but the story will resonate strongly at the Copa America currently taking place in Brazil, in which Colombia began with an impressive 2-0 victory against Argentina and booked their last-eight spot by beating Qatar.

Indeed, the only exposure to Colombia’s problems of the past for some has been  Narcos. Even in the context of the popular Netflix show, the details of Escobar death still seem scarcely believable.

Colombia, a nation torn apart by drugs wars, looked to its footballers to restore national honour going into the 94 World Cup in America.

No less a figure than Pele tipped them to win it after a 5-0 qualification win in Buenos Aires inspired by creative talents Faustino Asprilla and the bushy-haired Carlos Valderrama.

Instead, the tournament turned into a disaster. Colombia lost their opening match 3-1 to Romania and, 25 years ago on Saturday, a 2-1 defeat against hosts USA confirmed an early exit. The first was inadvertently scored by Escobar, stretching to make an interception but turning it past his own goalkeeper, Oscar Cordoba. 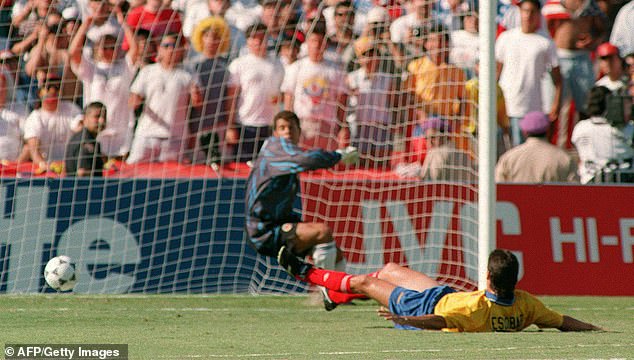 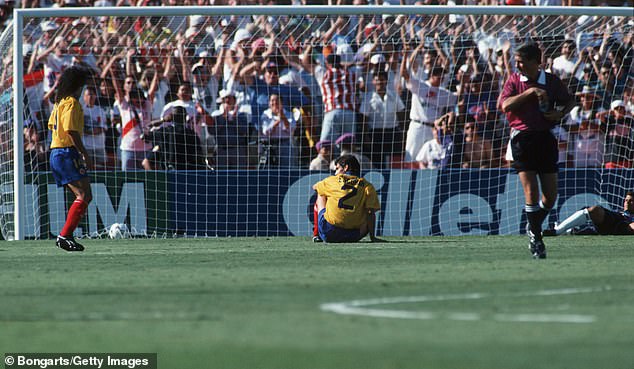 The defender, who was set to join AC Milan, was murdered on his return to Colombia

The reaction in Colombia was severe with the added twist that criminal gangs had lost serious amounts of money gambling on success. Given that cities like Cali and Medellin had the highest murder rates in the world at that time due to the narcotics industry, it was a toxic mix.

Back home in Medellin, Escobar’s friends urged him to stay in until the furore had settled but he argued: ‘I must show my face to my people.’

It proved a fatal move in a place that experienced 80 killings a week. He went to a nightclub and was baited about his own goal. He decided to leave for the car park in order to drive home but as he prepared to drive away another argument ensued and he was was shot six times by two men with handguns. It is alleged they shouted ‘Gooool’ before pulling the triggers. A cartel bodyguard, Humberto Munoz, later confessed to the murder but served only 11 years of a 43-year sentence.

The tragedy plunged Colombia to new depths. ‘Crying, crying, crying,’ is how Valderrama summed up the national mood. 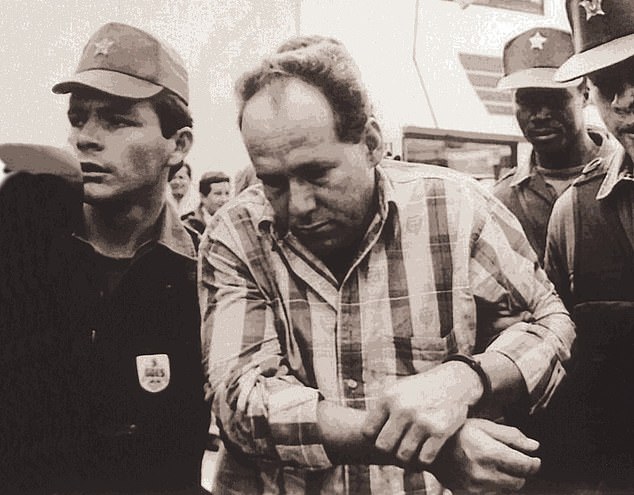 Other unsavoury incidents had also emerged from the World Cup camp with the brother of player Chonto Herrera killed during the tournament and coach Francisco Maturana receiving threatening phone calls over team selection and who he should leave out.

Escobar’s calm and pleasant personality only heightened the sense of grief that he should become a victim of a nation at war with itself.

A devout Catholic, a disciplined student, they were just some of the tributes given to the 27-year-old. He was nicknamed ‘El Cabellero de Futbol (the gentleman footballer)’ and had been due to start a new life and career with AC Milan the following season.

Forty years after setting up a rebel league that attracted stars like Alfredo di Stefano and England’s Neil Franklin, football-mad Colombia was an international pariah once again.

The World Cup in America carried on, after the initial shock, storylines turned to Diego Maradona being banned for failing a drugs test and latterly Roberto Baggio missing a penalty in the final against Brazil. 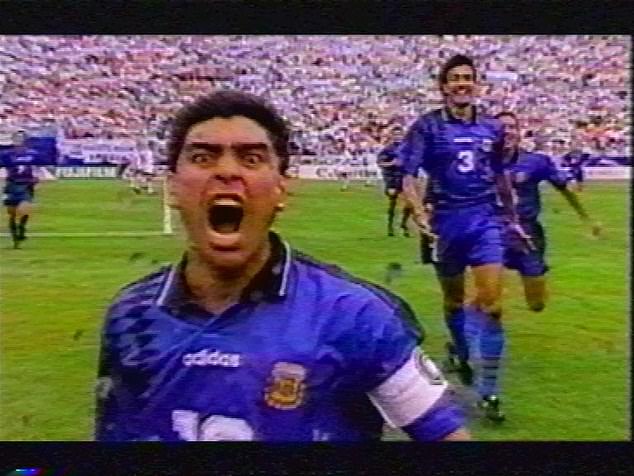 Yet long-term, the impact of the Escobar assassination was greater than either.

His senseless killing woke up the Colombian nation. Though written off as a basket case known only for cocaine and murder, this is no banana republic. With 48 million people, it is larger than Argentina.

There became a will to try and clean up the country, slowly but surely, in Escobar’s honour. Powerful drugs cartels were opposed with a new vigour and determination and many of its leaders extradited to the USA. The economy has improved and become more diverse and in football terms the old guard like Rene Higuita, himself linked with drug barons, were replaced by a new generation of players. 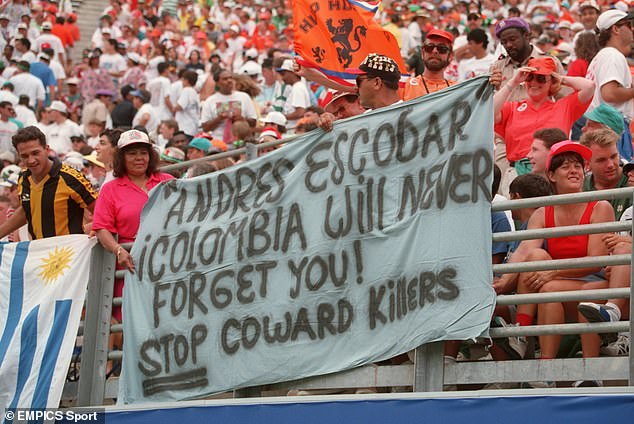 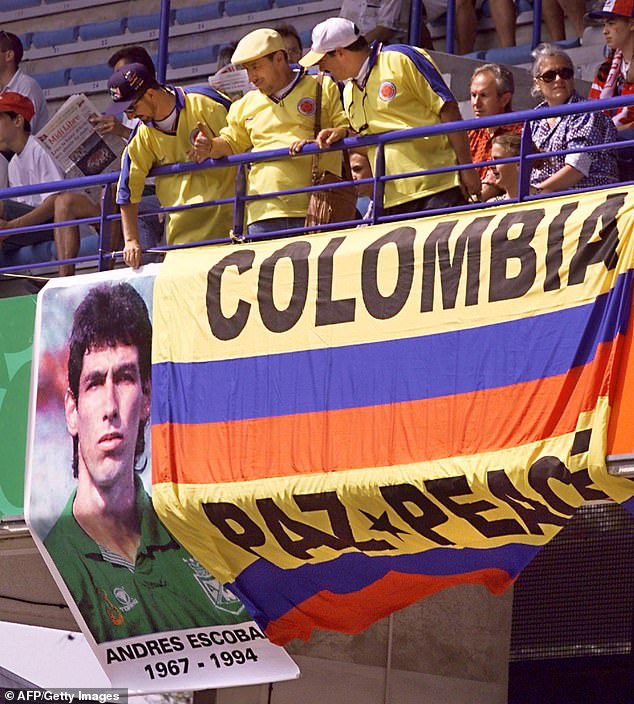 There were calls for peace – this banner was put on display at the following World Cup, France 98, during a match between Colombia and Tunisia in Montpellier

They won the Copa America in 2001 and themselves were replaced by bright talents like Radamel Falcao and James Rodriguez. More than 30,000 fans followed Colombia to Russia at the last World Cup. Though a death threat to Carlos Sanchez after his red card against Japan proved the old problems haven’t disappeared completely, it was mainly a joyous experience for those followers.

The team’s most famous supporter, Birdman, also helped improve the country’s image, his giant wings becoming one of the images of the 1998 World Cup in France.

Escobar himself supplied the inspiration in how the country should recover from his murder. After Colombia’s World Cup exit, he said in an interview with a leading newspaper El Tiempo: ‘We only have two options: either allow anger to paralyse us and the violence continues, or we overcome and try our best to help others. It’s our choice.’ 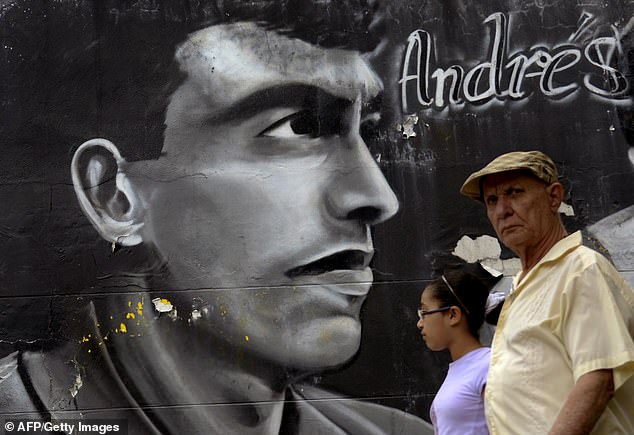 Medellin, and the rest of Colombia, still remembers the late Andres Escobar

A quarter of a century on, Medellin has developed from being a murder hotspot into a tourist resort. With its museums, botanical gardens and a fetching nickname ‘City of Eternal Spring’ because of its climate, Escobar will be proud of what’s happening to his home town.

On Sunday, Colombia will play Paraguay in their final group game in the Copa. Their star player Rodriguez is the same age that Escobar was when he lost his life and you can bet he’ll be aware of the special anniversary.

Rodriguez’s own uncle Arley, a young footballer with Independiente Medellin, was killed the year after Escobar’s own assassination.