For wealthy foreigners, respectability is the ultimate asset. Buying a mansion on millionaires’ row is only half the job — the real sign that you’ve entered Britain’s high society is by hosting a glamorous party there, thronged with titled bigwigs.

And as this week’s scalding Intelligence and Security Committee report on Russia confirmed, their influence is so endemic that London has morphed into ‘Londongrad’.

For their part, Britain’s elite are all too ready to play along with this ‘glitzkreig’, often displaying an alarming alacrity in the process.

They will serve — adequately remunerated, of course — on the boards of Russian and Chinese companies and accept generous donations to their pet causes, all the while beaming for the camera.

It should be stressed that nobody pictured in this photographic dossier is doing anything illegal. For decades, improving trade and investment ties with Russia has been an explicit priority of British foreign policy.

Nonetheless, humble outsiders can only marvel at the ease at which Russian oligarchs have been able to find such prime places at the top table of British life.

Elena Baturian (pictured with Sadiq Khan) is the richest woman in Russia and widow of Yuri Luzhkov, a former mayor of Moscow who was sacked from his post by President Dmitry Medvedev amid allegations of corruption in 2010

Widow of former mayor of Moscow

Elena Baturian is the richest woman in Russia and widow of Yuri Luzhkov, a former mayor of Moscow who was sacked from his post by President Dmitry Medvedev amid allegations of corruption in 2010.

Despite being dismissed, no legal case was filed against Luzhkov and he denied any impropriety.

In the same year, leaked U.S. diplomatic cables contained allegations — strongly denied by both — of her and Luzhkov’s links to the Russian mafia. Ms Baturina said that the U.S. diplomat was ‘repeating gossip and allegations conveyed to him by a journalist’.

After the family settled in Britain in 2011, she struck up an acquaintance with Boris Johnson. In 2016 — when Sadiq Khan was London mayor — she donated £138,000 from her charity to the Mayor’s Fund for London, dedicated to aiding young Londoners.

In 2017, she became a trustee of the charity — but resigned last year after questions were raised about her donation. A spokesman for Mr Khan said the Russian donor had stepped down ‘by mutual agreement’. 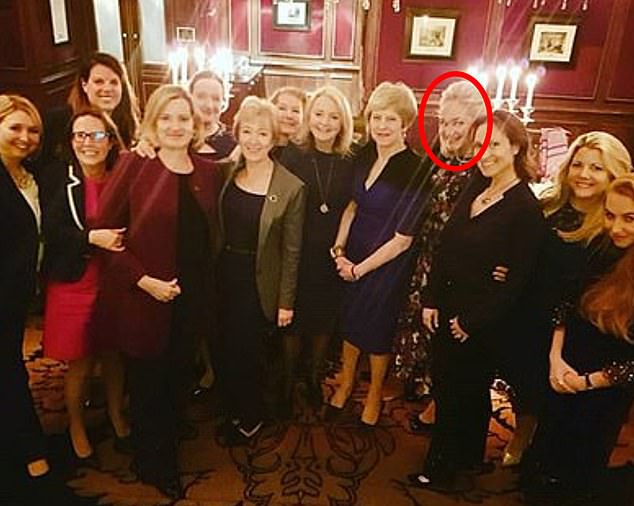 Lubov Chernukhin (pictured with Theresa May) is known for her own munificence after becoming the biggest female donor in the history of the Conservative Party with gifts totalling £1.7million

Despite being married to a billionaire who was once a deputy finance minister to Vladimir Putin, on these shores Lubov Chernukhin is known for her own munificence after becoming the biggest female donor in the history of the Conservative Party with gifts totalling £1.7million.

Last year at the Black and White ball, the highlight of the Tory fundraising calendar, she successfully bid £135,000 to spend an evening with Theresa May, plus £45,000 for tennis games with Boris Johnson and Ben Elliot, the Tory party chairman, and £30,000 for a private meal with Gavin Williamson, now education secretary. That storied soiree was held in the Churchill War Rooms.

In April last year, after donating another £135,000 at a separate fund-raiser, she was pictured enjoying a night out with former Prime Minister May and six female Cabinet members at the exclusive Goring Hotel in London’s Belgravia, above.

The Tory Party insist that all her donations are properly recorded, declaring at the time that she is not a ‘Putin crony’.

Ruben Vardanyan (pictured with Prince Charles), reportedly a friend of Putin, came in for criticism last year after a bank he owned, Quantus, based in the secretive British Virgin Islands, was investigated by prosecutors for alleged money laundering

Ruben Vardanyan, reportedly a friend of Putin, came in for criticism last year after a bank he owned, Quantus, based in the secretive British Virgin Islands, was investigated by prosecutors for alleged money laundering.

Mr Vardanyan is the 99th richest man in Russia.

He said that Quantus was an independent arm of his investment bank — and he was never involved in its operations or management, and did not personally oversee transactions or client accounts. There is no suggestion that Mr Vardanyan did anything illegal.

And while there is no suggestion that Charles knew about this, the future king was dragged into the affair.

Between 2009 and 2011, the Prince accepted donations of £152,000 from the financier to help restore an Ayrshire stately home. Mr Vardanyan is also said to have helped raise another £1.5 million for the cause from other Russians.

The Prince rewarded him with a black-tie dinner held in the Russian’s honour in 2014. 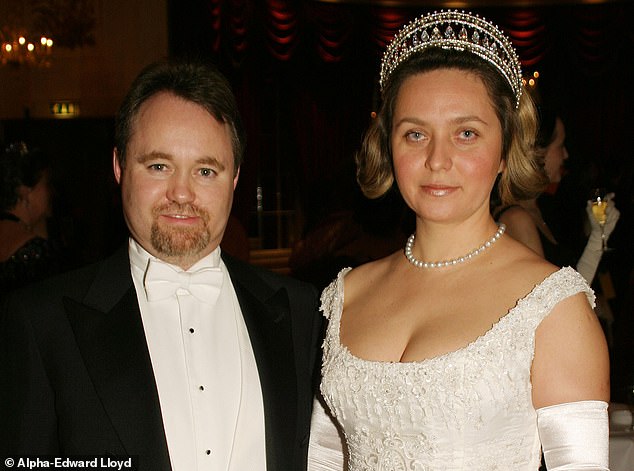 Peer wrote an ode to Putin

When Peter Truscott became one of the first peers to be suspended from the House of Lords since the 17th century, following the 2009 expenses scandal, no doubt the failed Labour MEP found solace in the arms of his attractive wife Svetlana Chernikov, the daughter of a senior Soviet military intelligence officer.

The pair met when Svetlana, then a doe-eyed 24-year-old, was procured by the official Soviet tourism agency to act as a guide to the Labour politician during his visit to Russia in 1991.

Since their meeting, Truscott has been an outspoken advocate of better relations with Russia.

He has even published an ode to the Russian president, called Putin’s Progress, and also nominated him for the Nobel Peace Prize.

Until last year, he chaired the advisory board of the Russian Gold Fund, a private equity fund. 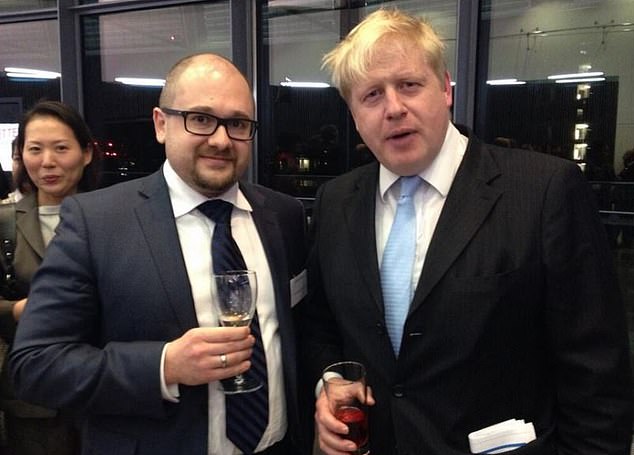 Pictured: Sergey Nalobin, who is rumoured to have been an operative of Russia’s Foreign Intelligence Service, with Boris Johnson

Despite rumours that he was once an operative of Russia’s formidable Foreign Intelligence Service — the heir to the murderous Soviet KGB, in which his father served as a general — Sergey Nalobin has for years moved effortlessly through the highest ranks of British Conservative politics.

This came to the fore in 2012, when the then first secretary at the political section of the Russian embassy helped the now-disgraced Conservative Friends of Russia pressure group host its launch party in the grounds of the Russian ambassador’s mansion in Kensington Palace Gardens, London’s grandest residential street.

The charming and gregarious Nalobin also rubbed shoulders with Mr Johnson, then the Mayor of London, and later tweeted a picture of the meeting in which he described Mr Johnson as his ‘good friend’.

Mr Johnson has since claimed he does not remember meeting the Russian.

In 2015, Russia accused the Government of refusing to fully extend Nalobin’s visa, claiming that ‘in practice it means expulsion’. 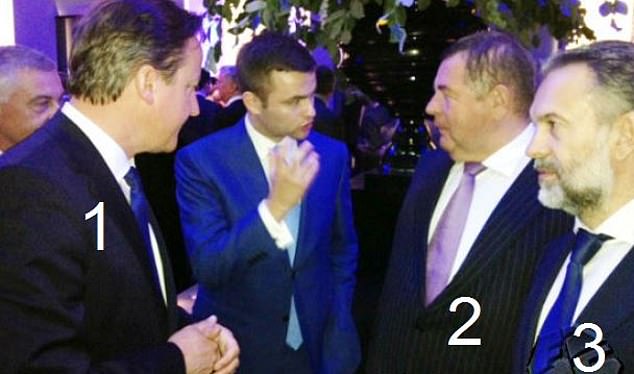 Both Vasily Shestakov, a member of the Russian parliament, and his billionaire friend Andrei Kliamko are close friends of Vladimir Putin — a relationship which has been cemented by their shared love of sambo, a form of judo.

But despite their links to the Kremlin, after hiring heavyweight PR firm New Century Media to help burnish their image in Britain, the pair received an invitation to the Conservatives’ summer party in 2014.

There, they bumped into then Prime Minister David Cameron, a meeting which the Russian state news agency TASS cynically used to claim that Shestakov had attended the Tory gathering as a ‘guest of honour’ and that the British Prime Minister had ‘approved’ the establishment of the Positive Russia Foundation, a new pro-Kremlin group that never actually materialised.