While the eighties is often thought of as the decade that fashion forgot, Princess Diana was often applauded for her statement looks from novelty knits to her love of gingham.

And the fourth series of The Crown has highlighted Princess Diana’s influence to a whole new generation, with eBay revealing new research that shows a surge in searches for looks inspired by the royal, from her telling ‘black sheep jumper’ to her signature tartan jacket.

The hit Netflix series tells the story of the Windsor Dynastty, with series four focusing on the early rocky romance between Charles, played by Josh O’Connor, 30, and Diana, played by Emma Corrin, 24 and Britain during the Thatcher years.

Fans have praised the show’s creator’s for their attention to detail in recreating some of the Princess of Wales’ early looks  – and the hard work hasn’t gone unnoticed by fashionistas who have been quick to snap up items similar to those worn by late royal, with some forking out hundreds on replica pieces.

Princess Diana wearing ‘Black sheep’ wool jumper by Warm and Wonderful (Muir & Osborne) to Windsor Polo, 1980. Many online have pointed out how the look hasn’t stood the test of time 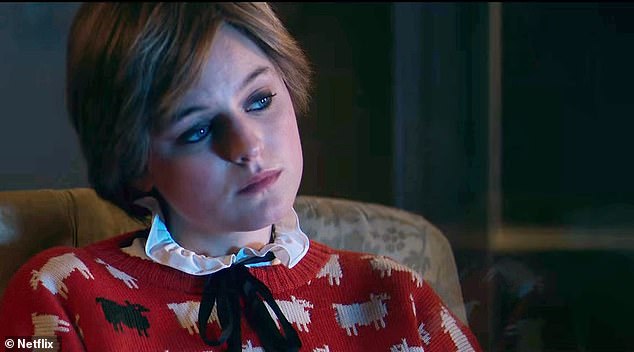 Emma Corrin in The Crown, wearing Diana’s famous black sheep jumper (pictured). The looks have been painstakingly recreated with incredible accuracy for the Netflix series 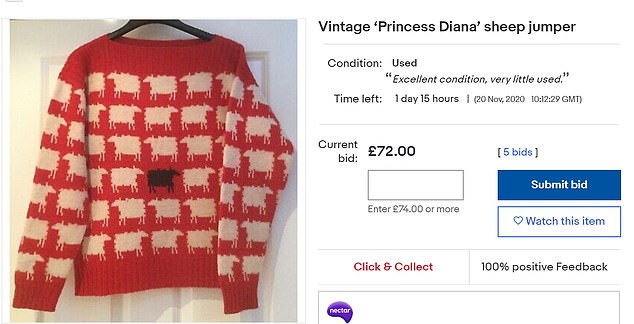 A Princess Diana sheep jumper is currently for sale on eBay for £72 . Searches have increased 21% for sheep jumper since Sunday

How much has Princess Diana’s fashion surged in popularity since The Crown?

On Sunday, the day the show was released, eBay saw searches for Diana-related attire increase by nearly 200 percent, with one search a minute for ‘red dress’.

Many believed Princess Diana’s infamous black sheep jumper cheekily hinted at her feelings of being an outsider in the Royal family.

It was worn by Emma Corrin in The Crown during a scene in which Diana can be seen lonely at Buckingham Palace moments before she tied the knot to Prince Charles, and a version of the jumper is currently for sale on eBay for £72.

New York-based label Rowing Blazers has also launched a collection inspired by the late Princess of Wales’ ’80s looks, which have seen a resurgence in popularity thanks to The Crown.

The celebrity-loved brand, worn by the likes of Timothee Chalamet, is delving into the world of women’s wear by re-creating some of Diana’s best hits – including biker shorts, double-breasted tweed blazers and her beloved jumpers.

Diana famously wore the black sheep jumper at a polo match at Smith’s Lawn polo Club in Windsor in 1983 – and it was designed by Joanna Osborne and Sally Muir’s Warm and Wonderful.

It was apparently a gift from the mother of one of the princess’s page boys at her wedding to Prince Charles in 1981. 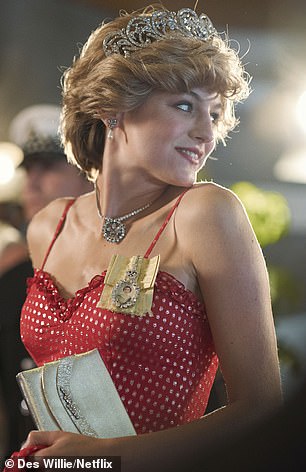 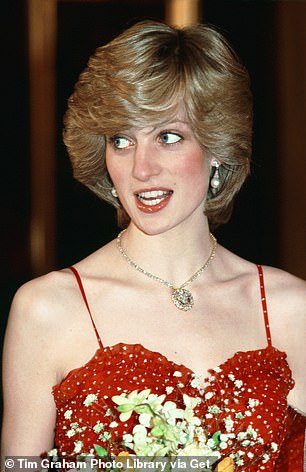 On Sunday, the day the show was released, eBay saw searches for Diana-related attire increase by nearly 200 percent, with one search a minute for ‘red dress’.. The Crown’s wardrobe department has once again triumphed, recreating some of Diana’s most memorable looks. Pictured, Corrin as Diana and the princess at the Royal Opera House in 1982 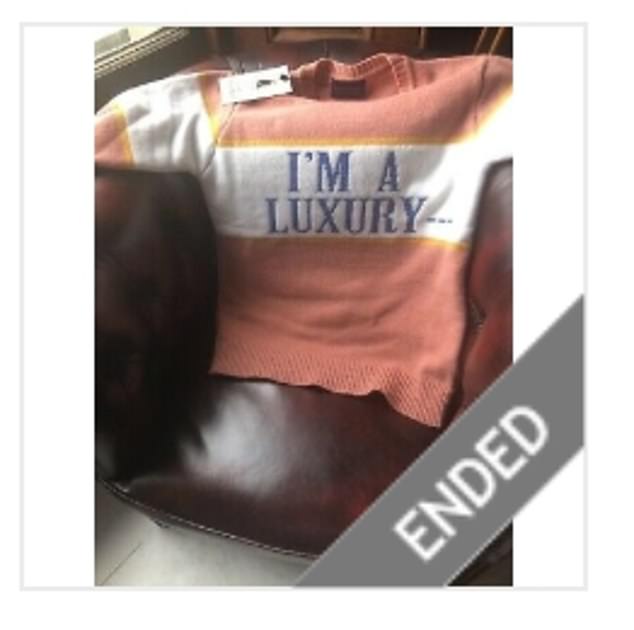 A version of the I’m A Luxury jumper sold on eBay for £190 on Monday, no doubt after the buyer was inspired by seeing the Crown. 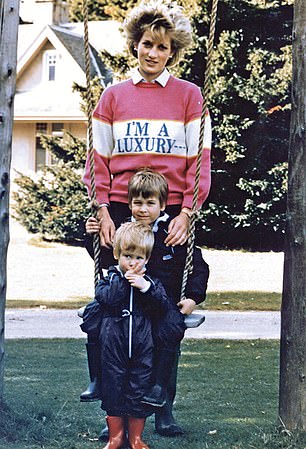 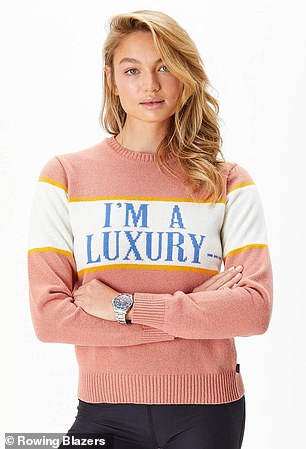 Working with the original designers, the company is re-releasing the ‘Sheep Sweater’ by London’s Warm & Wonderful and the ‘I’m a Luxury’ jumper (pictured left on Diana, and right, in the collection) by Gyles & George for $295

The I’m A Luxury sweater, which is the same price, was worn by the princess in the late ’80s, with one snap showing Diana sporting the garment while on a swing with her sons Prince William and Prince Harry.

A version of the jumper sold on eBay for £190 on Monday, no doubt after the buyer was inspired by seeing the Crown.

Jemma Tadd, Head of Fashion at eBay UK, told FEMAIL: ‘Inspired by the iconic looks worn by Princess Diana, as replicated in the latest series of The Crown, we’re seeing shoppers turn back the clock.

‘Diana is once again setting the trends, with an uptake in styles from a tartan jacket, to a Peter Pan collar and even that classic sheep jumper.’

Speaking to BAZAAR.com, Joanna Osborne, the co-designer of Warm & Wonderful, said: ‘Princess Diana is enduringly fascinating. She still feels very contemporary, and people’s interest in her and her family is as strong as ever. 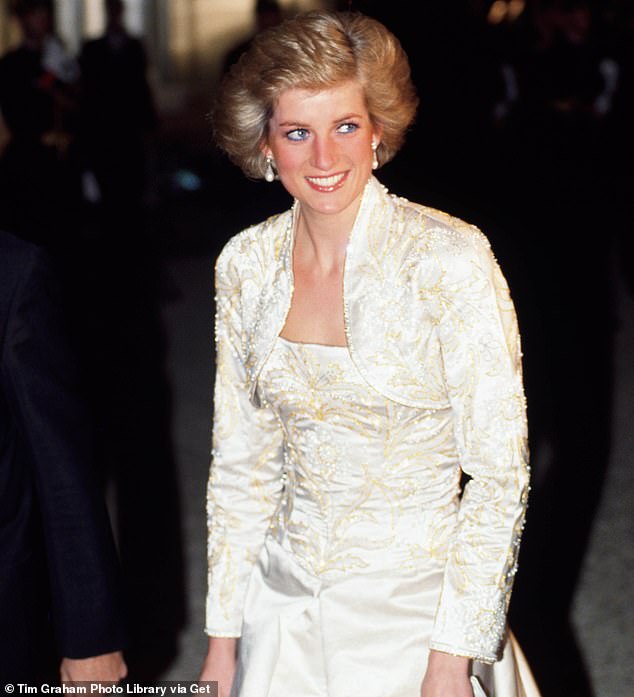 In 1988’s Paris visit, Diana wore a white beaded dress and was the inspiration by Miss Corrin’s outfit in The Crown

‘Even after so many years, she is still exerting a strong influence on fashion with her own stylish combination of independence, kindness, and glamour.’

In the 1980s, Joanna and her partner, Sally Muir, were left shocked when their piece was sported by Diana to a number of events, making headlines each time.

Elsewhere, Gyles Brandreth, of Gyles & George, said he was over the moon and delighted but not totally surprised when seeing the royal in one of his designs.

‘Having met her, I knew she was somebody who had fun and liked to laugh. I think she appreciated the wit of the jumpers; the colors, the look, the style,’ he added.

The collection is made entirely in Britain, Europe and the United States, with other pieces ranging from $48 to $795. 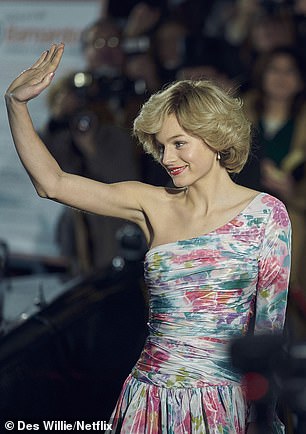 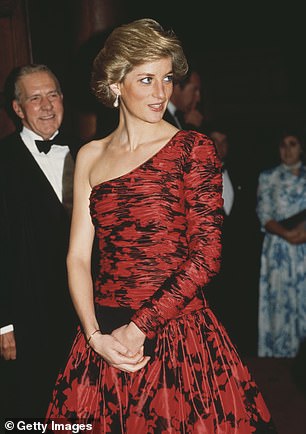 This outfit from The Crown (left) takes inspiration from Diana’s on-trend one-shoulder look. Pictured right, the princess at the Middle Temple in October 1988 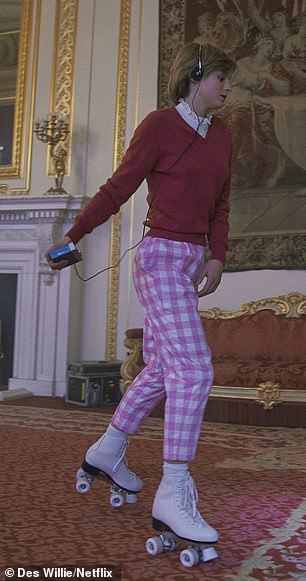 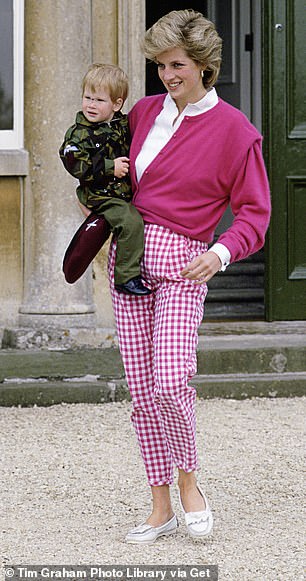 Check out those slacks: Young ‘Diana’ roller-skating in The Crown and similarly attired princess carrying Harry in 1986 in bold gingham trousers 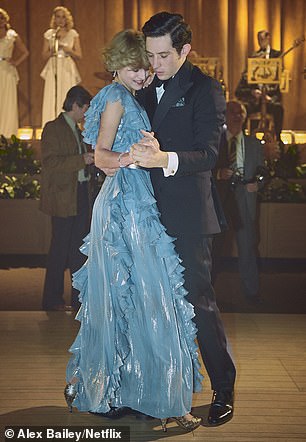 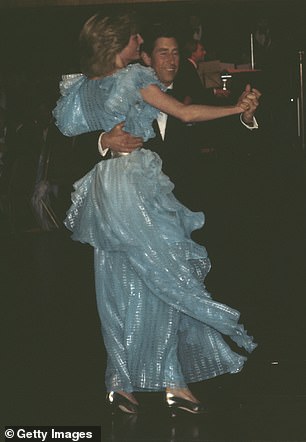 Following in the footsteps: Emma Corrin as Diana and Josh O’Connor as Charles recreate the night the couple danced in Sydney in 1983, right

The show has headed straight to the top of the Netflix chart since coming out on Monday.

Netflix has previously announced it will last six seasons in total, but series five won’t be released until 2022.

The fifth season will see Imelda Staunton, 64, take over the role as Queen Elizabeth II from Olivia Colman, while Leslie Manville, 64, will portray Princess Margaret.