The production team behind The Crown have offered an apology to Claire Foy and Matt Smith for their controversial and widely-discussed wage disparity.

The Crown came under fire after producers revealed Matt was paid more than Claire for the first two seasons of the Netflix drama and in light of the revelation, a petition was launched for the actor to donate his wages to the Me Too campaign.

Since the news broke, Left Bank Pictures have issued a statement in which they apologised to the actors for the situation they have been left in.

Outrage: The production team behind The Crown have offered an apology to Claire Foy and Matt Smith for their controversial and widely-discussed wage disparity

The full statement, released to Variety, reads: ‘We want to apologize to both Claire Foy and to Matt Smith, brilliant actors and friends, who have found themselves at the centre of a media storm this week through no fault of their own.

‘Claire and Matt are incredibly gifted actors who, along with the wider cast on The Crown have worked tirelessly to bring our characters to life with compassion and integrity.

‘As the producers of The Crown, we at Left Bank Pictures are responsible for budgets and salaries; the actors are not aware of who gets what, and cannot be held personally responsible for the pay of their colleagues.’

Just hours before, a petition was launched for Matt to donate the pay difference to the Time’s Up movement. 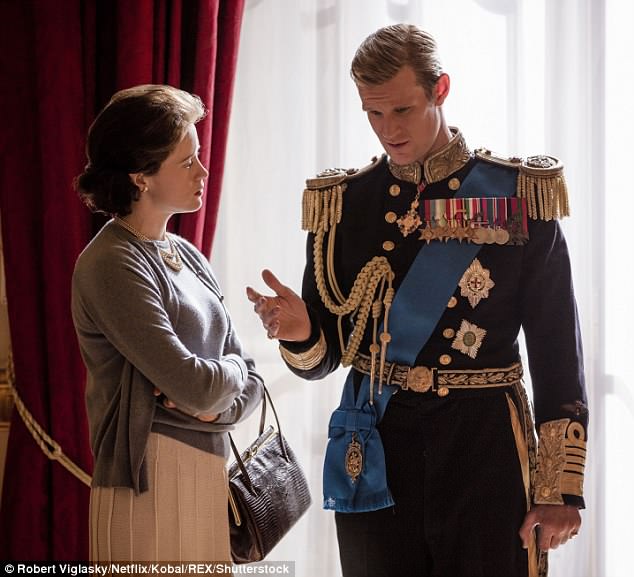 ‘Do the right thing’: The Crown came under fire after producers revealed Matt was paid more than Claire for the first two seasons of the Netflix drama and in light of the revelation, a petition has been launched for the actor to donate his wages to the Me Too campaign

The 35-year-old Doctor Who star, who plays Prince Philip in the biopic, has been called ‘to make up for this sexist pay gap’ after earning more than Claire, 33, despite her starring as the lead role, Queen Elizabeth.

The Care2 petition reads: ‘You know gender pay gaps are a problem when even the Queen isn’t paid fairly. Women in all industries are facing a struggle for pay equality, women in the US typically earn 80 cents for every dollar paid to their male counterparts for full time work.

‘While it may be easy for some to dismiss gender pay disparity for already high-paid actors like Claire Foy, I believe that publically addressing high-profile cases of sexism will also help create greater opportunities for all women — in all careers.

‘This is critical moment for Netflix and Crown co-star Matt Smith to show that they stand with women and do the right thing.’

The petition comes after fans took to Twitter in outrage after The Crown producers Suzanne Mackie and Andy Harries made the shocking revelation when they were asked about the stars’ pay during a panel discussion about the series at the INTV Conference in Jerusalem last Tuesday.

They admitted that he did make more due to his Doctor Who fame, according to Variety. (He starred in the popular BBC series from 2010 to 2014.) 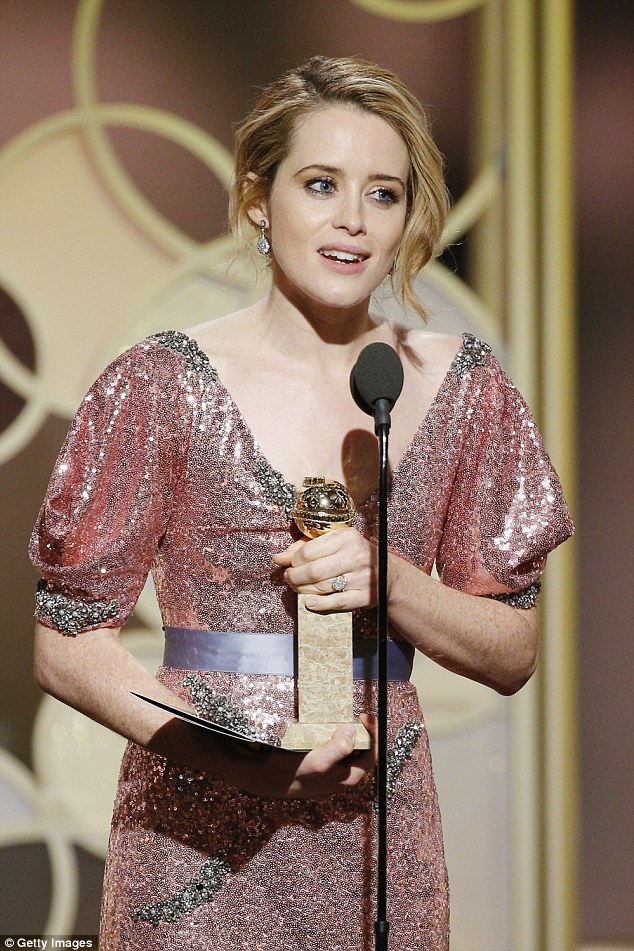 Shining star: Foy was awarded Best Actress in a TV Series for her work on season one of the show at the 2017 Golden Globes in January of last year

They didn’t explain why Foy, who has significantly more screen time in the biopic, continued to earn less than Smith in the second season, after she eclipsed his fame with her award-winning performance.

However the Producers did tell Variety this will change as creative director Suzanne Mackie said: ‘Going forward, no one gets paid more than the Queen.’

Claire gained critical acclaim for her portrayal of the monarch, earning a Golden Globe Award and a Screen Actor’s Guild Award for best actress following the first season as well as receiving nominations at the BAFTA and Primetime Emmy Awards. 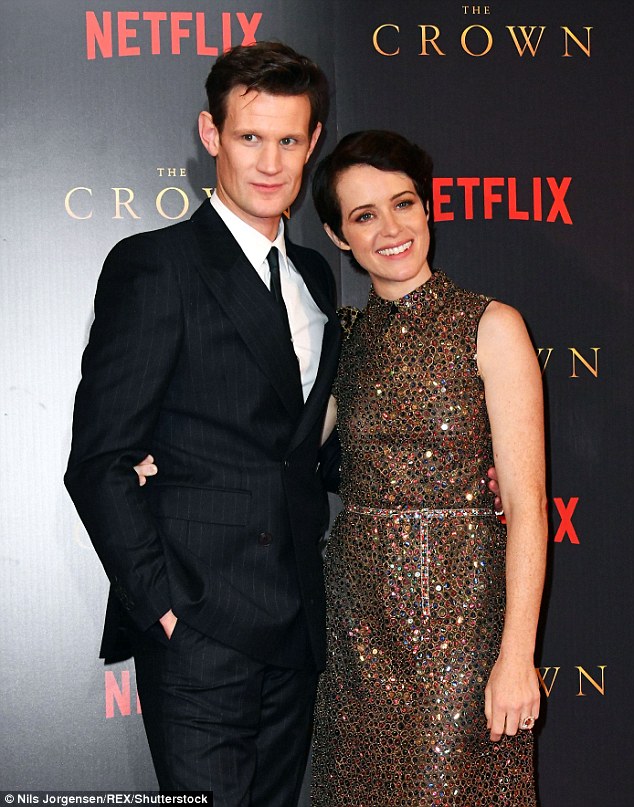 Working relationship: Foy made $40,000 per episode, Variety revealed last year. It is not yet known how much Smith was paid, as they are pictured together at a premiere back in November

For the second season of the highly-popular program, the blonde beauty earned another SAG Award for outstanding actress and earned another nomination for the Golden Globes.

Matt also earned numerous award nominations for his portrayal, but has not yet won a major gong for his efforts.

Despite the accolades and acclaim for Claire, he kept his higher salary in season two.

Last year Variety revealed her salary, with the star earning $40K an episode. It is not yet known how much Matt was paid.

The producers insisted the pay discrepancy would be changed for future seasons – however, that will be of little consolation to the talented actress, who will no longer star in the show. 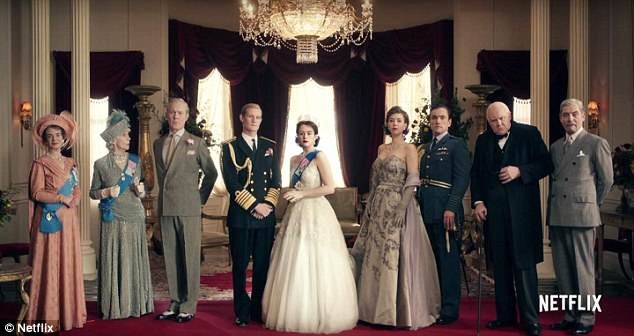 Moving on: The cast will change for season three of The Crown to allow for the fact the royals are getting older

Former National Economy Adviser to US Presidents Bill Clinton and Barack Obama Gene Sperling even chimed in saying the show was high-quality television.

The Atlantic contributor wrote: ‘Every fan knows Claire Foy was THE stand out performer that made it shine. Her portrayal as the young Queen Elizabeth is a very top tour-de-force acting performance. No one should have been paid more than her.’

The cast will change for season three of The Crown to allow for the fact the royals are getting older.

Olivia Colman will play the Queen, while the role of Philip has not yet been announced.

Netflix has renewed the series for a third and fourth season back in January.

It will be moving forward without Foy and Smith as it will move forward into the Camilla Parker Bowles years and will even introduce a young Princess Diana. 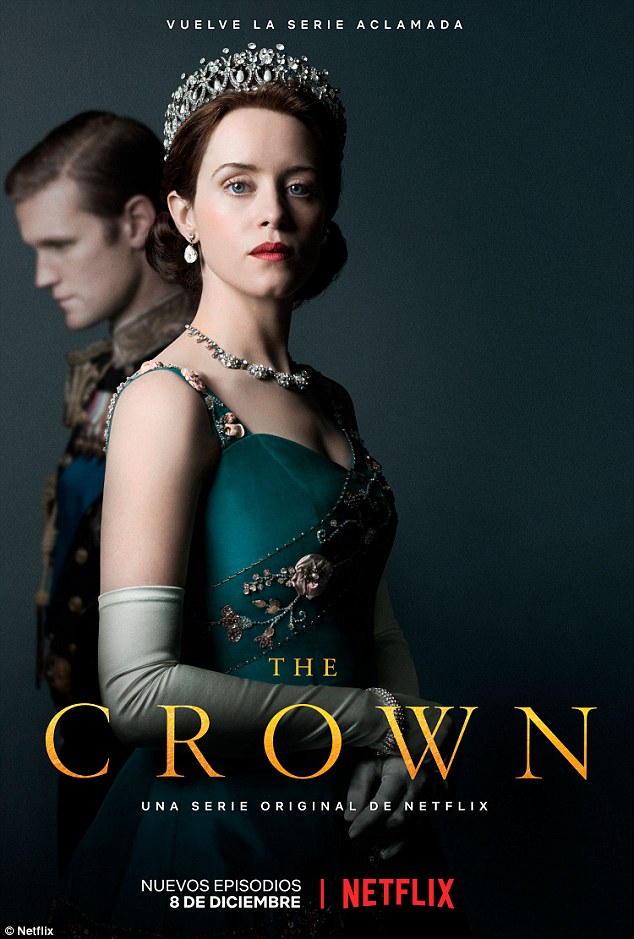 Watch the throne: Netflix has renewed the series for a third and fourth season back in January but it remains unclear when it will be returning