Claire Foy cut a glamorous figure as she arrived to CBS Studios in New York City on Tuesday.

The Crown actress, 38, looked radiant in an Adeam two-tone dress with a biege off the shoulder detail and long black sleeves.

The garment also featured an a-symmetric hemline while Claire cinched her waist with a black belt.

Looking good: Claire Foy cut a glamorous figure as she arrived to CBS Studios in New York City on Tuesday

The Wolf Hall star added height to her frame with a pair of black heels while she also sported matching sunglasses.

Styling her brunette locks into a ponytail, Claire complimented her outfit with a pair of gold earrings.

The outing comes after it emerged a man who had been stalking the actress and sent her thousands of explicit messages had entered the UK illegally.

‘Obsessive’ Jason Penrose, 49, posed as a Hollywood producer and repeatedly targeted Claire – at one stage turning up at her home. 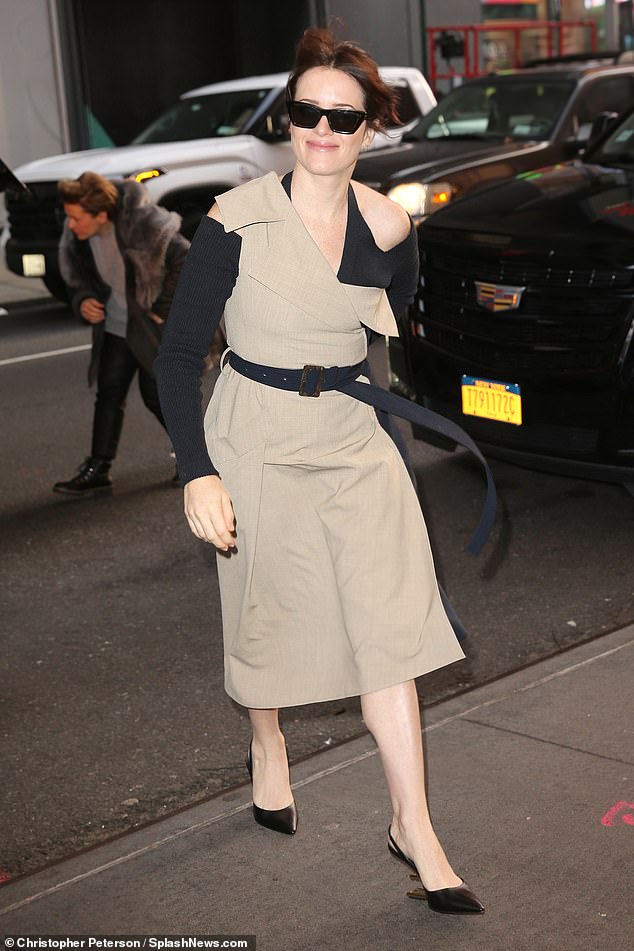 Style: The Crown actress, 38, looked radiant in an Adeam two-tone dress with a biege off the shoulder detail and long black sleeves

The American stalker bombarded her publicist Emma Jackson with more than 1,000 explicit emails, including one referring to rape between February 19, 2021 and February 7, 2022.

Penrose appeared at Wood Green Crown Court on November 28 where he spoke only to confirm his name. Judge David Aaronberg KC warned him that he could be deported after sentencing.

Penrose was told he faced at least 30 months behind bars for his persistent stalking campaign.

In emails shared with the court, he sent graphic messages detailing Claire being raped and how he wished for her to be his girlfriend. 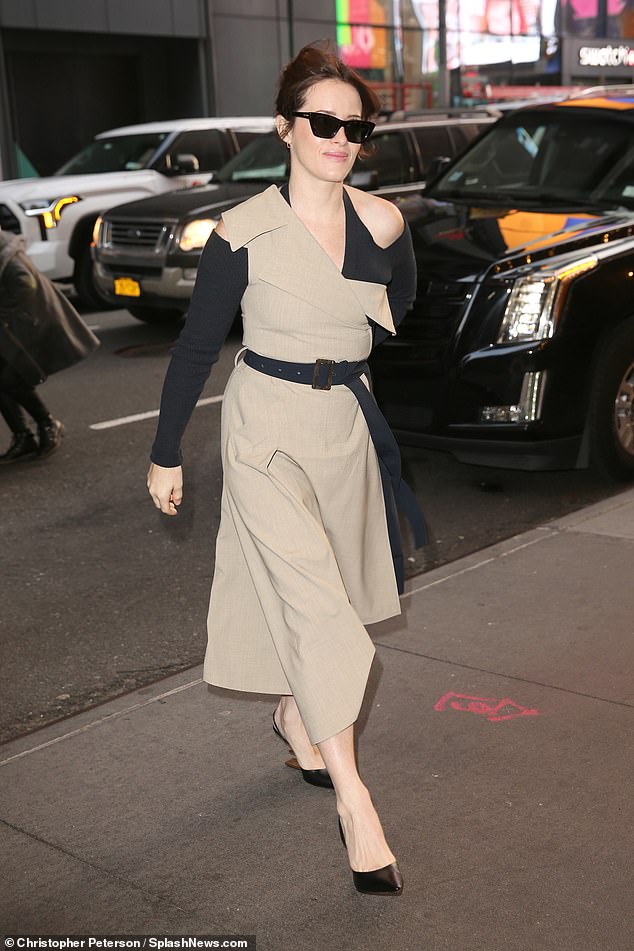 Trendy: The garment also featured an a-symmetric hemline while Claire cinched her waist with a black belt

On December 17, 2021, the Golden-Globe-winning actress was horrified to find Penrose had turned up at her home and was repeatedly ringing her doorbell, Thames Magistrates court heard.

Claire suffered sleepless nights and said the ordeal has affected ‘every aspect’ of her life, at one stage begging friends and industry colleagues not to tag her in pictures in case Penrose used them to track her movements.

The court previously heard remarks made by the actress, who revealed how Penrose’s actions left her feeling as though she was in danger.

The stalking had ‘an extreme effect on her life and peace of mind’, and she was left ‘frightened knowing he was somewhere.’

‘Ms Foy was terrified as she did not know what his intention was. She was in fear for her and her daughter’s lives’.

‘Obsessive’: Stalker Jason Penrose, 49, posed as a Hollywood producer and repeatedly targeted the award-winning actress – at one stage turning up at her home

‘She struggles to sleep and is terrified in her own home. She feels like the freedoms before Mr Penrose contacted her have now gone,’ prosecutor Varinder Hayre added.

On the night he went to Claire’s address, the door intercom was answered by her daughter, and Penrose said: ‘It’s Jason, I’m outside.’

The stalking left the actress ‘in genuine fear for her safety and terrified and helpless in her own home.’

Judge Aaronberg adjourned sentence until 2 December, adding: ‘It is the joint view of everybody who is involved in the case that Mr Penrose has a mental illness which is treatment resistant and there is a high risk of further offending and a high risk of harm.

‘The suggestion is that the only way of dealing with this is a custodial sentence.

‘He suffers from delusional beliefs and relatively limited insight into his mental illness and there is a suggestion that keeping him in hospital is not going to help.’

Penrose initially contacted Ms Foy through her agent and publicist claiming to be a movie producer.

He said he was a scriptwriter with a $20million deal with Warner Brothers Studio and wanted Ms Foy to act in his sci-fi film. 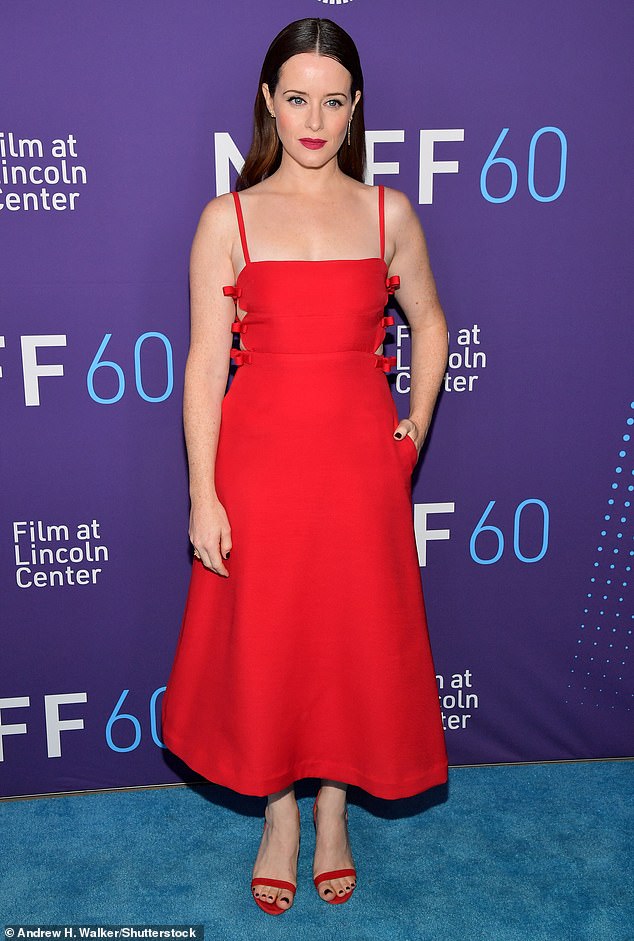 Terrifying: The Crown actress said in a letter to the court that Penrose’s ‘relentless attempts’ to contact her were ‘traumatic’ and affected every aspect of her life

She was granted an interim stalking protection order earlier this year, but despite the order Penrose sent her another letter and a parcel from the hospital where he was being treated.

District Judge Michael Oliver had previously imposed a five-year stalking protection order against Penrose in July after the actress raised ‘great concerns due to the nature of the communications.’

Penrose, who was accompanied to court by NHS workers, previously admitted two breaches of a stalking protection order.

Penrose, who is originally from the USA, must surrender his passport to police, not apply for travel documents, live and sleep as directed by the Islington NHS Trust, not contact Ms Foy directly or indirectly or attend an address he knows or believes to be Ms Foy’s address. 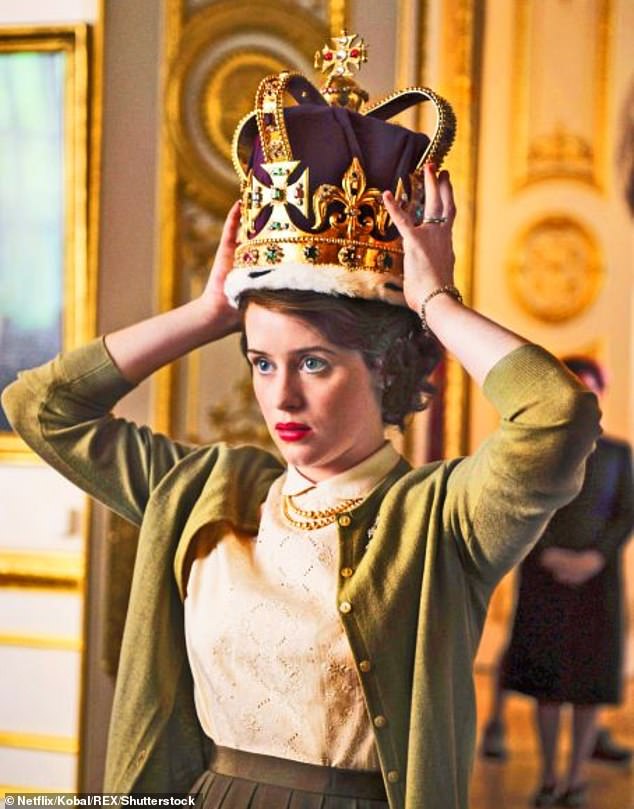