The Crown’s Claire Foy gets £200,000 in back pay to plug gender gap with Matt Smith

It was, by anyone’s standards, a truly regal pay day.

The Mail on Sunday has learned that Claire Foy, who starred as the Queen in hit Netflix series The Crown, has received a bumper £200,000 in back pay from the show’s producers.

The payment comes after it was revealed that Foy, 33, was paid less than co-star Matt Smith, who starred alongside her as Prince Philip in 20 episodes broadcast over two series.

The sum is designed to make up for the pay disparity, suggesting that Smith, 35, was paid £10,000 more than her for each one-hour show.

Foy earned a reported £29,000 each episode. Smith’s pay packet for The Crown has never been revealed.

The payment comes after it was revealed that Foy, 33, was paid less than co-star Matt Smith, who starred alongside her as Prince Philip in 20 episodes broadcast over two series

Smith’s bigger wage was defended by producers who said he was a better-known ‘name’ when The Crown first started.

But the former Doctor Who supported Foy’s bid for parity.

In an interview with the Hollywood Reporter last week, Smith said: ‘Claire is one of my best friends and I believe that we should be paid equally and fairly and there should be equality for all. ‘I support her completely and I’m pleased that it was resolved and they made amends for it because that’s what needed to happen.

‘Going forward I think we should all bear in mind that we need strive to make this a better and more even playing field for everyone involved.’

A source confirmed last night: ‘The difference in the wages between Matt and Claire in the 20 episodes of the show so far was backdated. It has all been amicably resolved.’

Foy, who will be replaced in the next season of The Crown by Olivia Coleman, only learned she had not received equal pay when producer Suzanne Mackie let it slip at a TV conference last month. 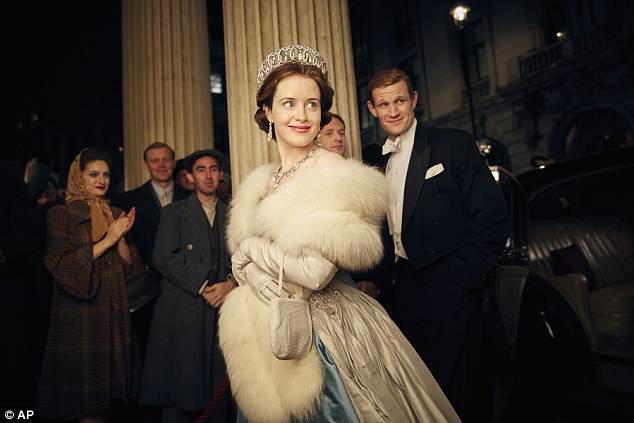 The sum is designed to make up for the pay disparity, suggesting that Smith, 35, was paid £10,000 more than her for each one-hour show

Mackie said that Smith was paid more because he was ‘better known’, having found international fame as Doctor Who, whereas Foy had appeared in lower profile series such as the BBC’s Wolf Hall and Little Dorrit.

In a statement sent to The Mail on Sunday, the production company behind The Crown, Left Bank Pictures, said: ‘As the producers of The Crown we are responsible for budgets and salaries. The actors are not aware of who gets what and cannot be held personally responsible for the pay of their colleagues. We are absolutely united with the fight for fair pay, free of gender bias and for a rebalancing of the industry’s treatment of women in front of the camera and behind the scenes.’

Neither Netflix nor representatives of Foy or Smith responded to requests for comment last night.