The devastation of a once thriving Puerto Rico town

It was once one of Puerto Rico’s most dazzling resort towns; a thriving beachfront paradise where tourists sipped rum, dined on fresh seafood and soaked up the glorious Caribbean sunshine.

But that was before Playa Punta Santiago was torn to shreds and plunged into anarchy by Hurricane Maria – earning it the grim new nickname ‘Playa Apocalipsis’ (Apocalypse Beach).

DailyMail.com was the first reporting team to visit the ravaged beauty spot close to where the devastating category 4 hurricane made landfall.

Playa Punta Santiago was devastated by Hurricane Maria over a week ago. The once thriving vacation town now lays in ruins 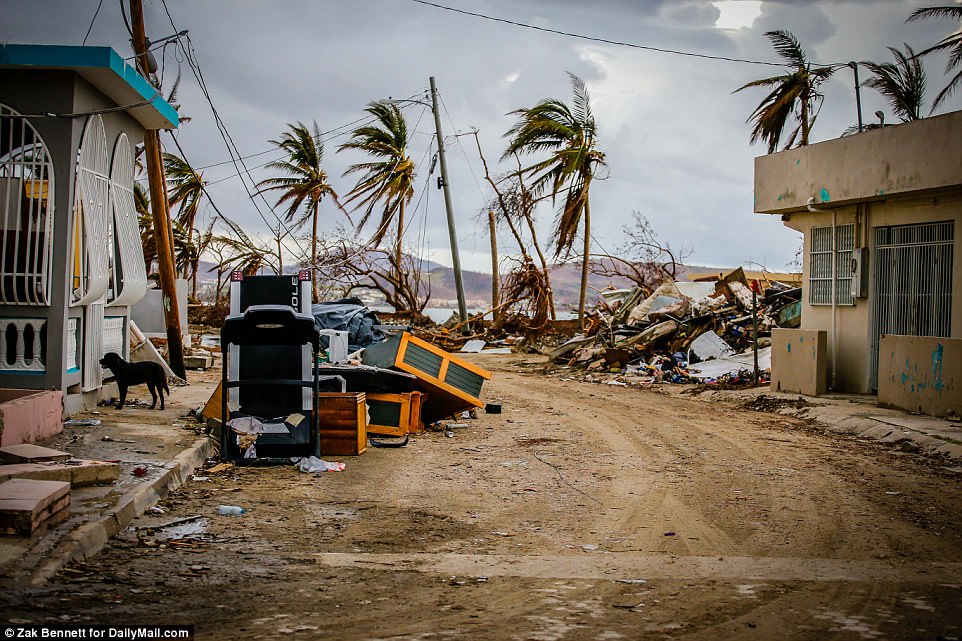 Locals in the town do not have power and many are forced to loot. There is also little service and little resources so even if someone did call the police, it is likely they would not come 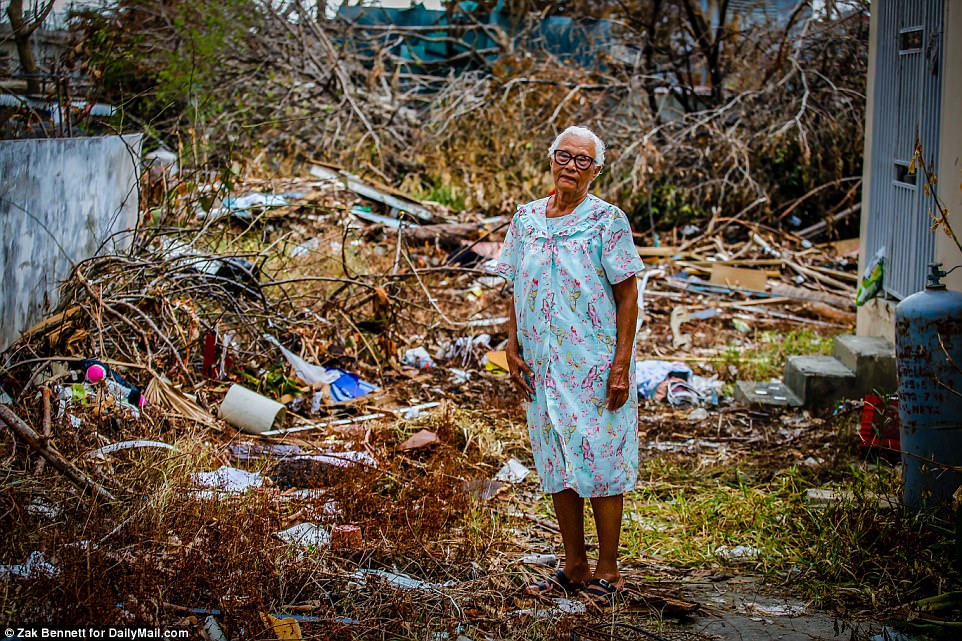 Inocencia Lopez, 85, stands outside her home. She says people helped her move everything from inside her home outside as it was all destroyed 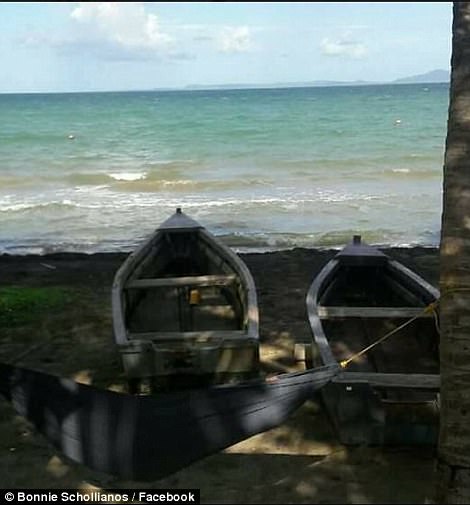 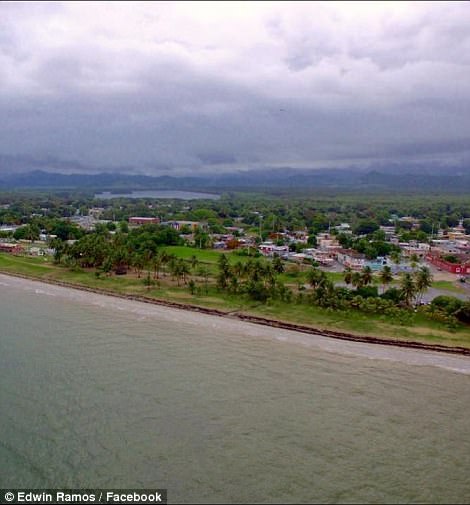 Before: No one died in the town mainly because many of the most vulnerable homes on the shore are empty resort homes

We were confronted with unimaginable scenes of destruction, lawlessness and residents so desperate for food they admitted to looting supermarkets to survive.

‘If Mr Donald Trump wants to know what an apocalypse looks like he should take a look around here’ said 43-year-old resident Jose Colon.

‘They say this is the worst hit street in the whole of Puerto Rico. It’s bad enough in the day but at night the bandits come to raid the empty homes. Even the soldiers are too scared to come here.’

The worst of the damage centers on a two-mile strip of Street Number 3 where blacked-out homes and restaurants lead toward a sun-drenched tropical beach reduced to a maze of fallen palm trees.

Wealthier residents fled long ago but the handful of poor families marooned here with no cash or transport face a daily nightmare to find enough food and water amid the rancid squalor.

Rubble and trash has been piled up to form a makeshift barricade at one end of the street in an effort to keep out looters and locals have armed themselves with sticks and axes for protection.

They say they have had just one visit from a Department of Public Works team who came out to survey the downed power lines and gave each family enough just enough water to last a day. 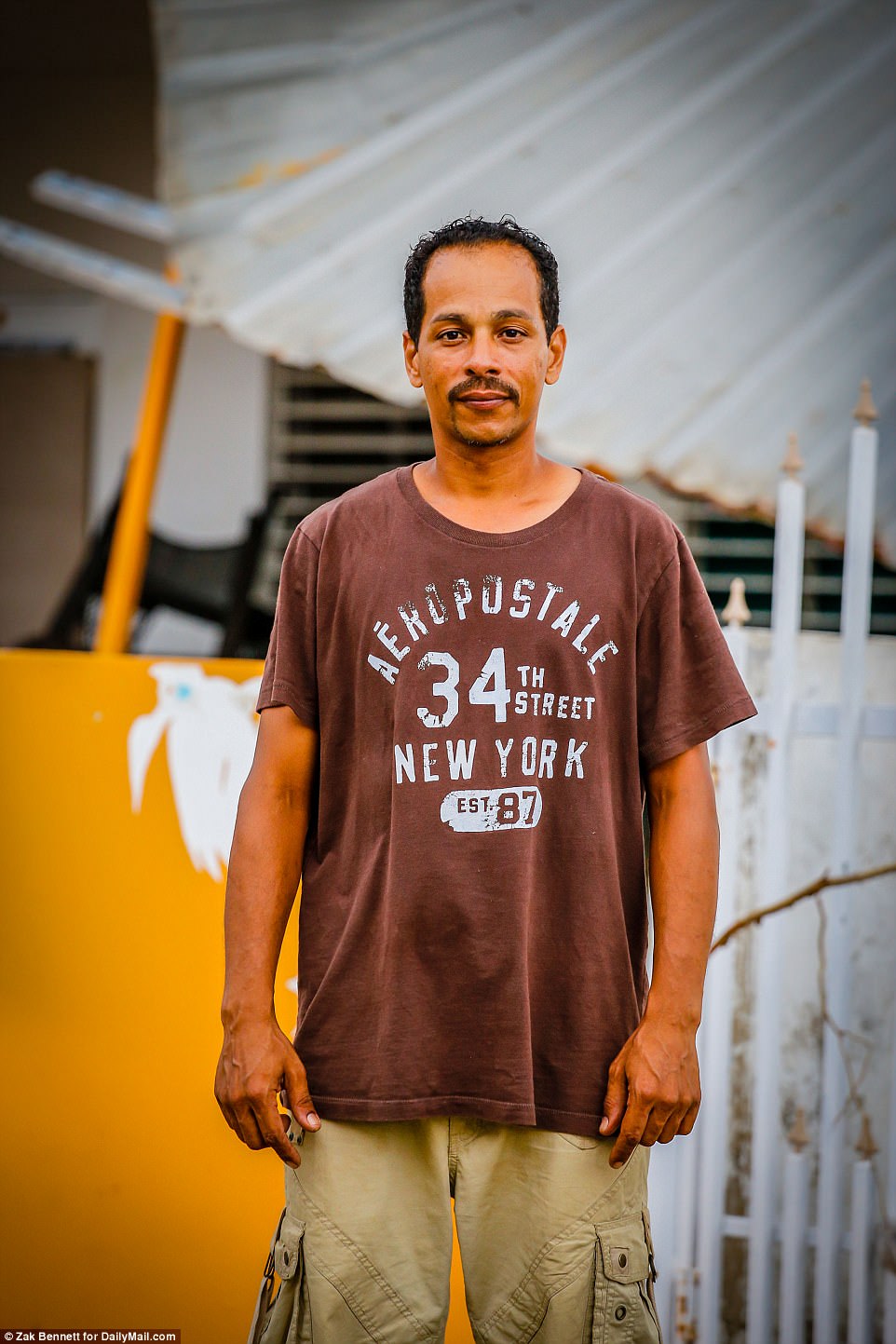 Jose Colon, 43, stands outside his home in Playa Punta Santiago. He said if Trump wants to know what an apocalypse looks like, he should see the town 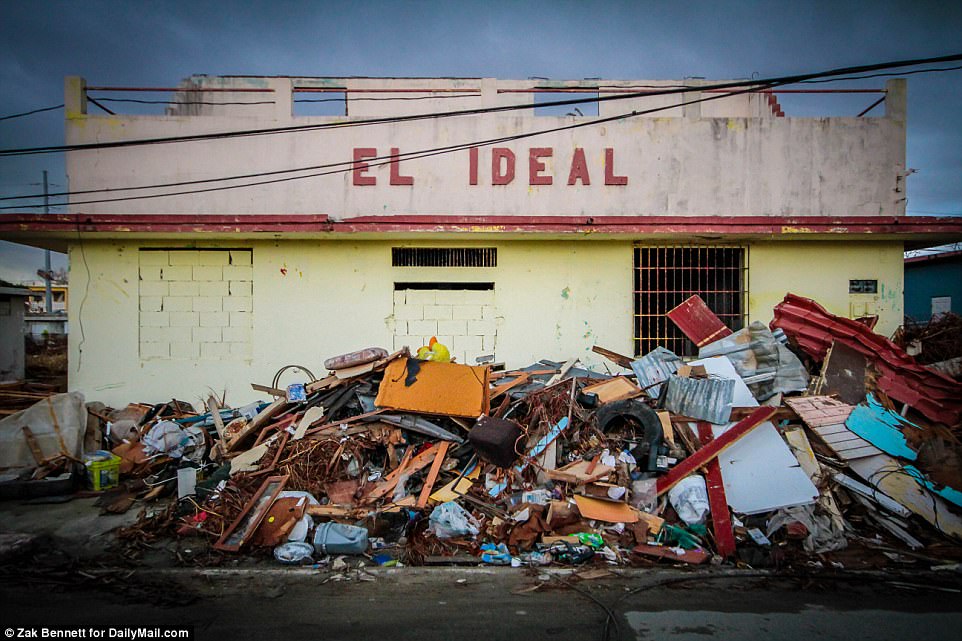 ‘We have been completely abandoned by our government and the US’: Much of the infrastructure has been destroyed beyong repair 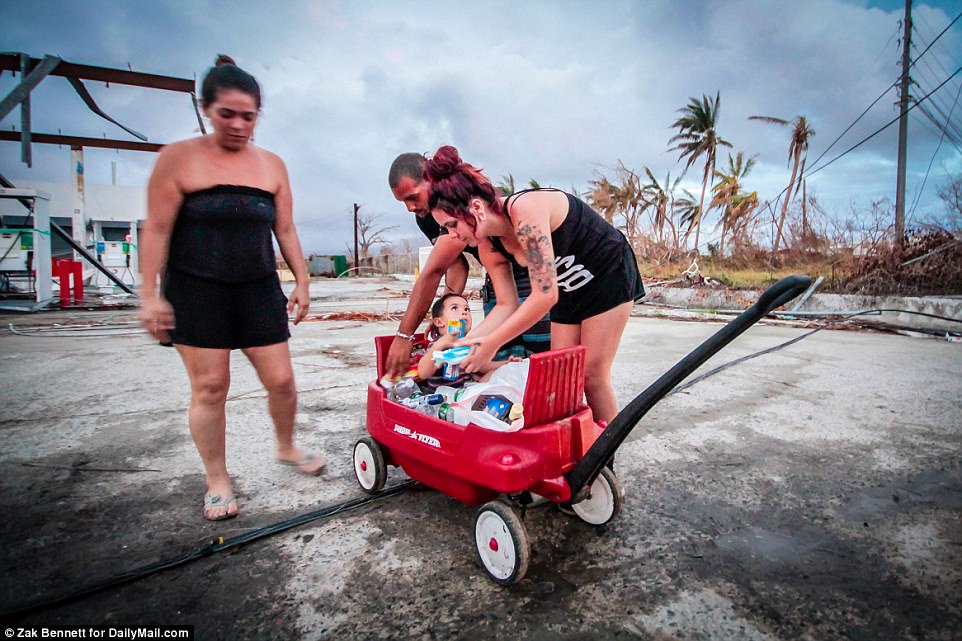 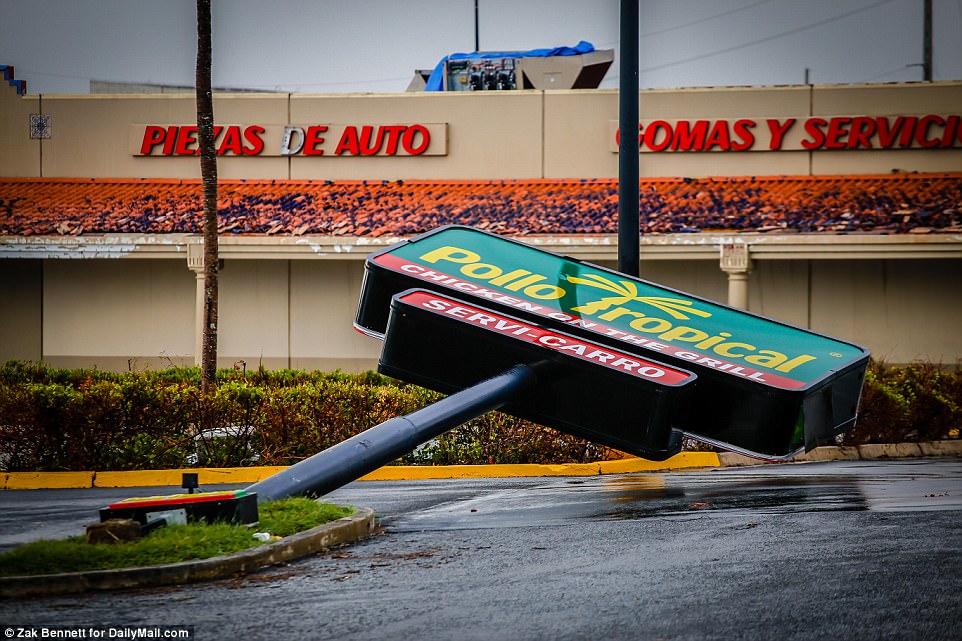 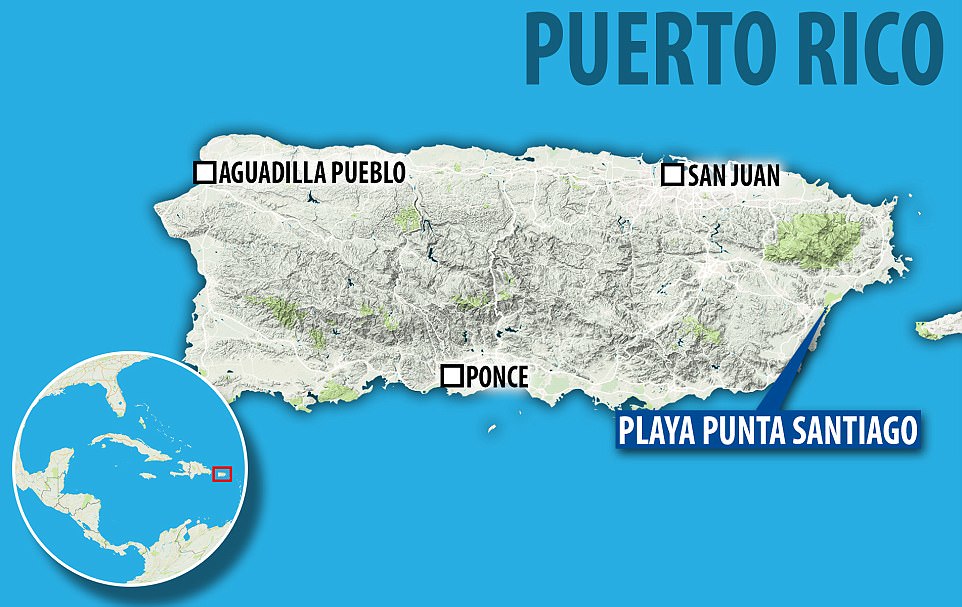 ‘There were people running after the truck screaming and crying for more,’ said Haniel Pomales, 22.

‘If they hadn’t come with soldiers and police officers we would have taken every last drop of water they had. We are thirsty and desperate.’

Pomales found our four days before the hurricane hit that his 21-year-old wife Jeaseely Maldonado was pregnant with their first child and he says he will do anything to protect her.

‘We have been completely abandoned by our government and the US,’ he went on.

‘My brother’s friend is a cop, his advice was arm yourselves with whatever you can find and do what you need to do. If you had signal you could try calling the cops but they won’t come.

‘He said that if we shoot someone we should just leave their body in the street and they will come and pick it up in the morning.

‘People are walking to the nearest Walmart and looting what they can to sell on the streets. It’s easy to judge us from the safety of a hotel room in San Juan but out here that little amount of cash can keep you alive.’

When Maria slammed into the pretty beachfront town just over a week ago she was packing not only 200mph winds but also a storm surge reaching 6ft. 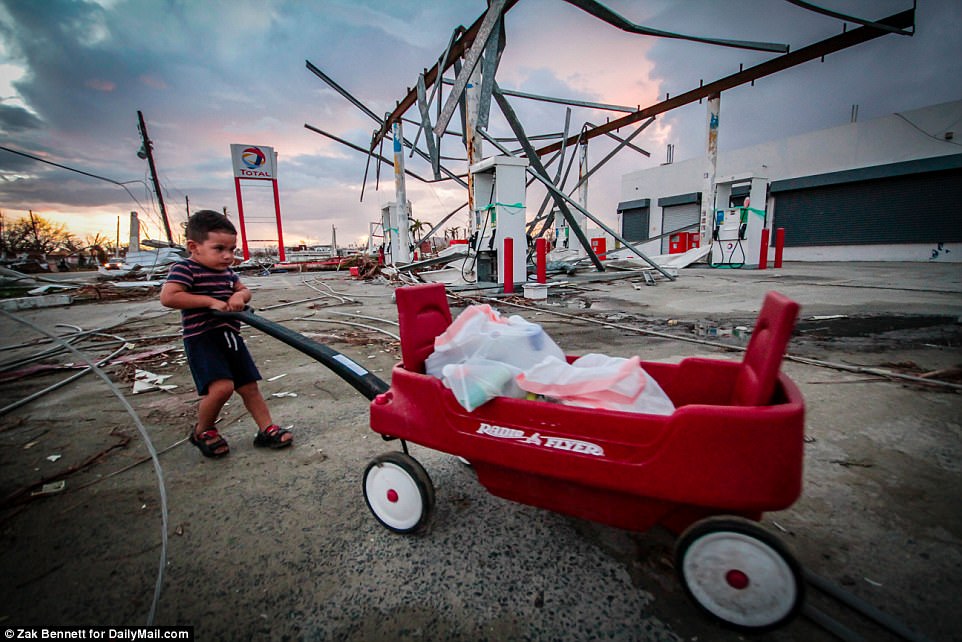 Sharier David Cruz, 2, tries to pull his cart of supplies home in his toy red wagon 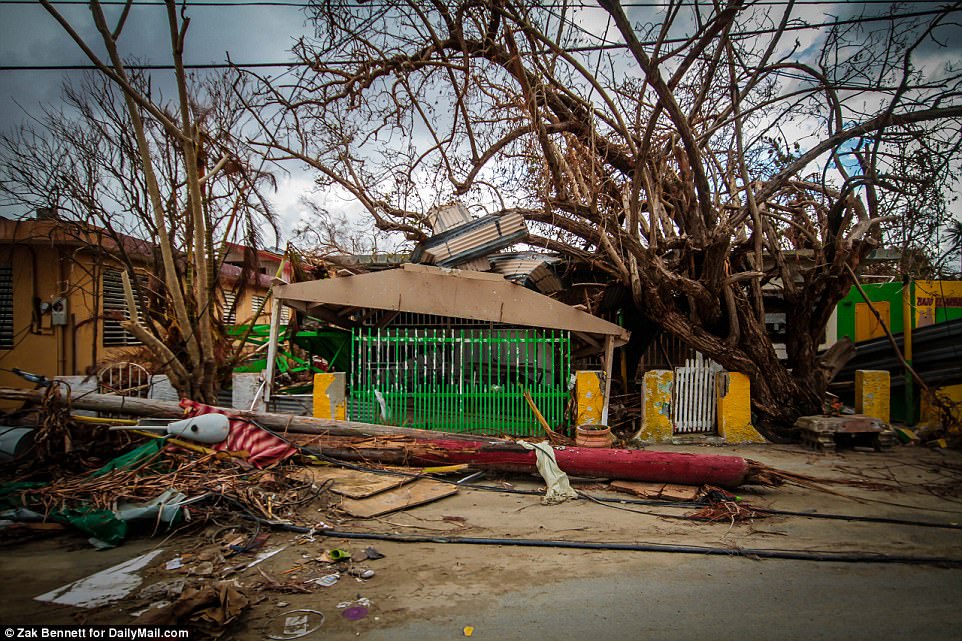 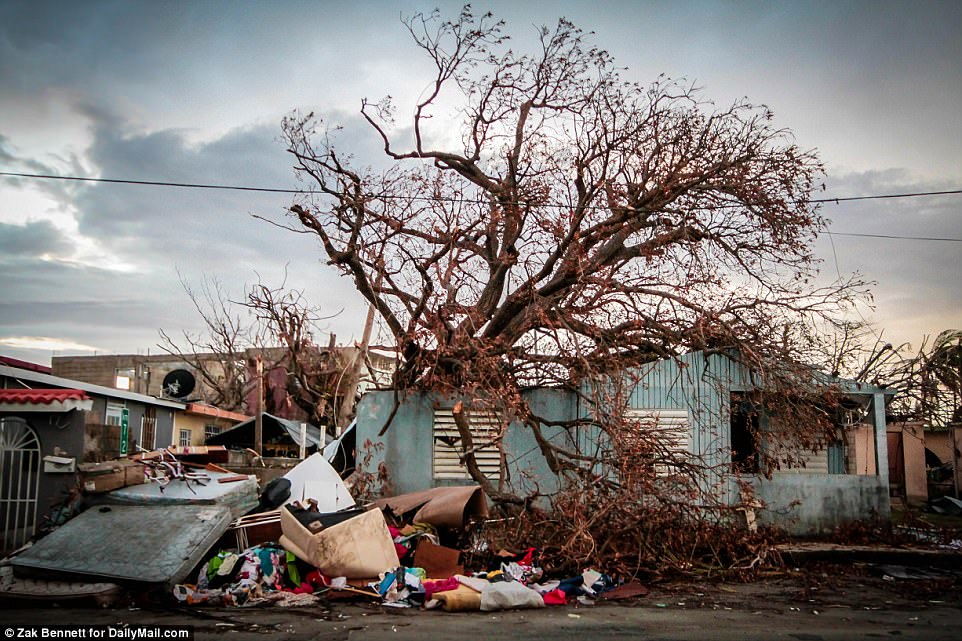 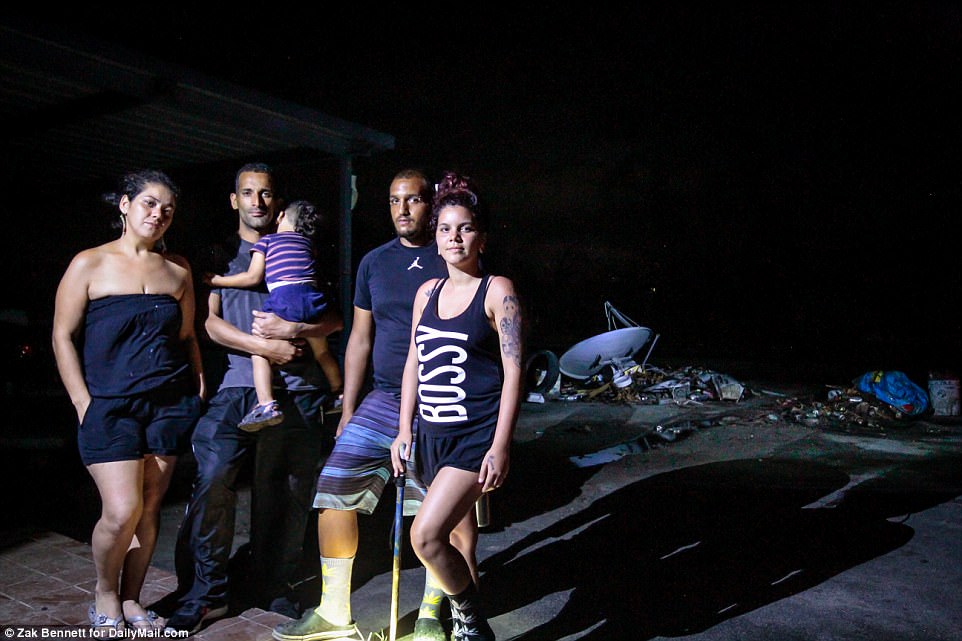 Natalie Civilles, 29, David Cruz, 35, and their 2-year-old son Sharier David Cruz, Haniel Pomales, 22, and Jeaseely Maldonado, 21, stand in the darkness since there is no power 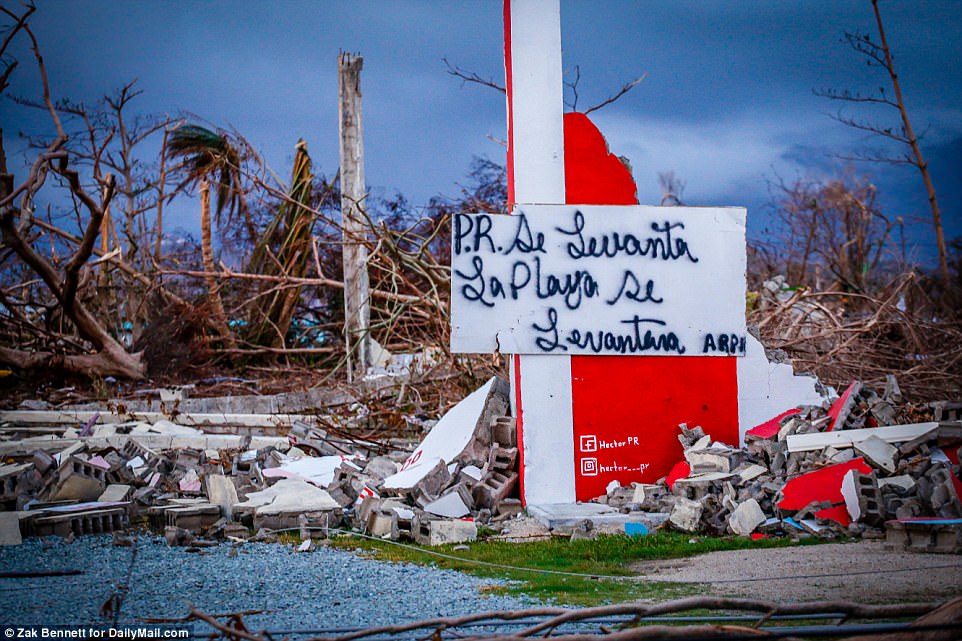 A sign says ‘Puerto Rico rise up, the beach rise up,’ among the devastation in Playa Punta Santiago

Residents told us they rushed to higher floors to escape a wave the size of a tsunami, while those living in one-story homes and shacks clambered on top of roofs and cars.

Miraculously nobody was killed, owing mainly to the fact that many of the houses are empty vacation homes.

Most of the beach has been swept away and the putrid stench of sewage and rotting food lingers in the air.

‘There are million-dollar homes here but when the owners finally come back they will find nothing left,’ said Natalie Civilles, 29.

‘This was such a welcoming place before,’ she added, through tears. ‘There were bars, restaurants and people laughing and having fun. Now the gas station and the supermarket are in ruins, most of the wooden homes are gone.

‘I’m so scared for my son I just want to get him out of here. When the night comes I’m afraid someone will break into our home.’

Guevara was struggling just to secure her own family’s property and told us her pleas for help had gone unanswered.

‘The army did come out here on one occasion and clean the place a little but there is no security,’ she admitted.

‘People are scouring the garbage and smashing windows to steal things. It’s heartbreaking.’

Her neighbor Uuanda Mellan, 48, operated a bustling seafront café selling fried shellfish and fruit juice to tourists for 23 years before Maria left her business a twisted pile of debris.

‘The government say they are helping us but where is this help?’ the mother-of-four demanded to know. 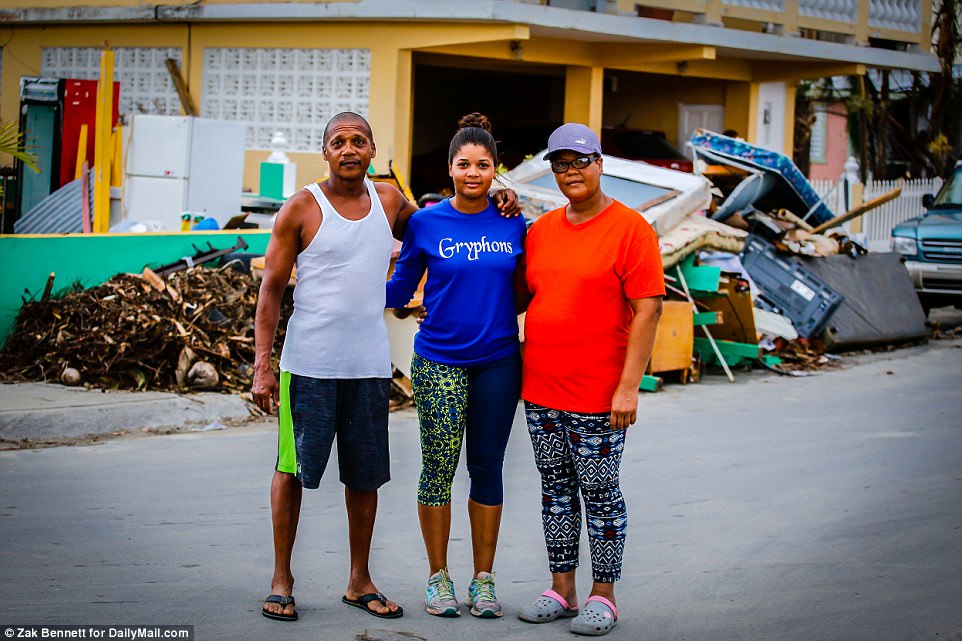 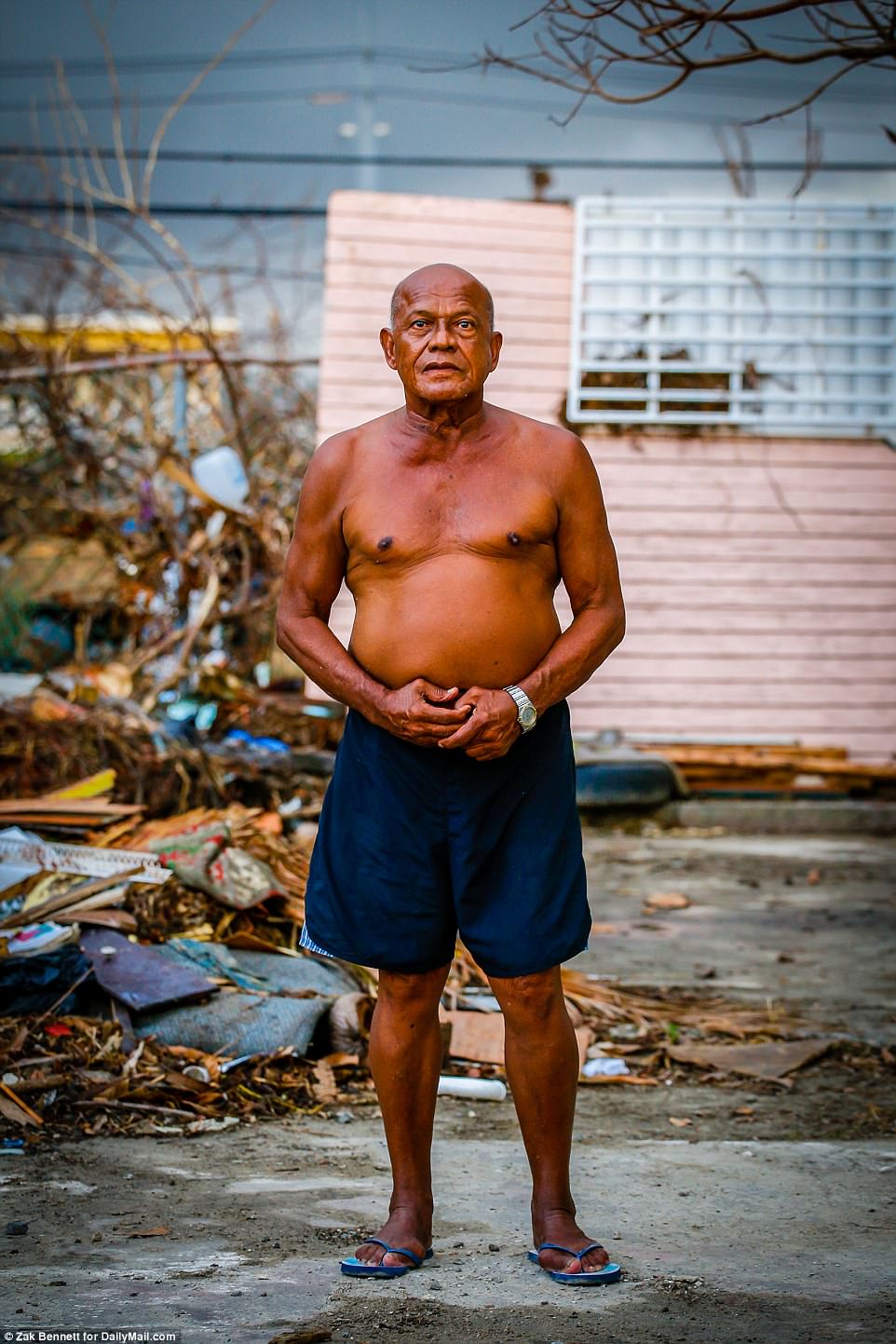 Angel Varrios, 71, a US Army veteran, stands outside his home that was almost completely devastated by Maria 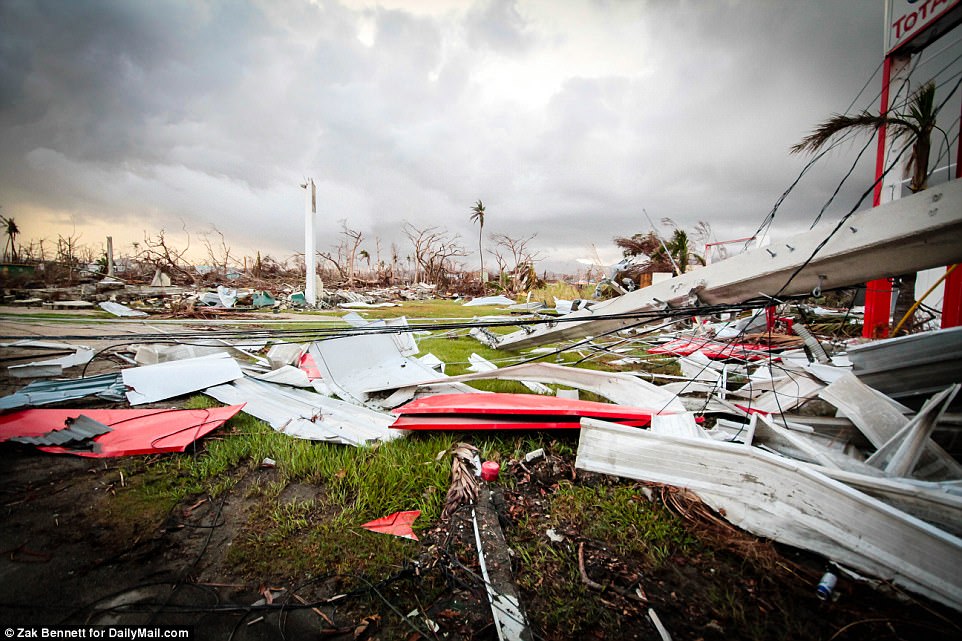 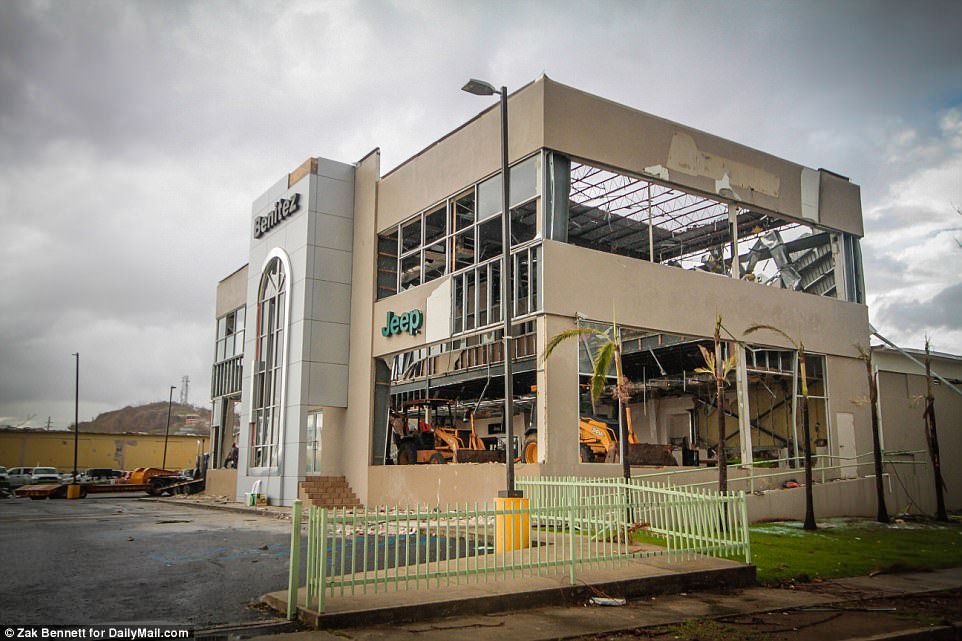 A Jeep dealership is seen mostly destroyed in Humacao, Puerto Rico over a week after Maria hit

‘People would come here to walk up and down taking photos. Now you see only a dead place.

‘The nature here was precious. Now there is no greenery, no birds.’

Residents told DailyMail.com that that by day they walk several miles to the Las Palmas shopping mall on the outskirts of Humacao to hunt for food.

Businesses there include household US names such as Walmart, Pepboys, Pollo Tropical and Chili’s – but hurricane damage has left the deserted strip mall resembling something from a war-torn Third World county.

A handful of cops and security guards are stationed on the perimeter to try to prevent looting but there’s likely very little left to steal.

A Jeep dealership across the street has lost its windows and roof. Flummoxed construction workers stare up at the obliterated structure wondering where to start.

As nightfall falls on the Playa Punta Santiago, meanwhile, the normal backdrop of laughter and partying is replaced by just the buzzing of mosquitoes and an eerie silence.

Petrified residents including retired US Army infantryman Angel Verrios, 71, prepare to bed down for yet another night in hell.

‘I don’t feel well. I’m so sad. I want to go but the water destroyed my car,’ he said with a trembling voice.

‘I will leave everything behind just to escape from this nightmare – it’s only going to get worse.’