The difference between Harry and Will’s engagement photos

Face to face with their eyes closed and faces touching, Prince Harry and Meghan Markle’s official engagement photos are perhaps the most intimate images ever seen of any royal couple.

The thoroughly modern couple posed for two photographs earlier this week at Frogmore House, one in colour and one in black and white.

Many royal fans have questioned whether Meghan Markle may have even gone as to go topless under her Ralph & Russo couture dress but it is believed she has chosen nude underwear.

The portraits, that were released by Kensington palace on Thursday, are remarkably different from those of Prince William and Kate’s, taken back in 2010.

Prince Harry and Meghan Markle have today released their official engagement portraits taken at Frogmore House, including this one which sees the bride-to-be in a dress costing almost £50,000 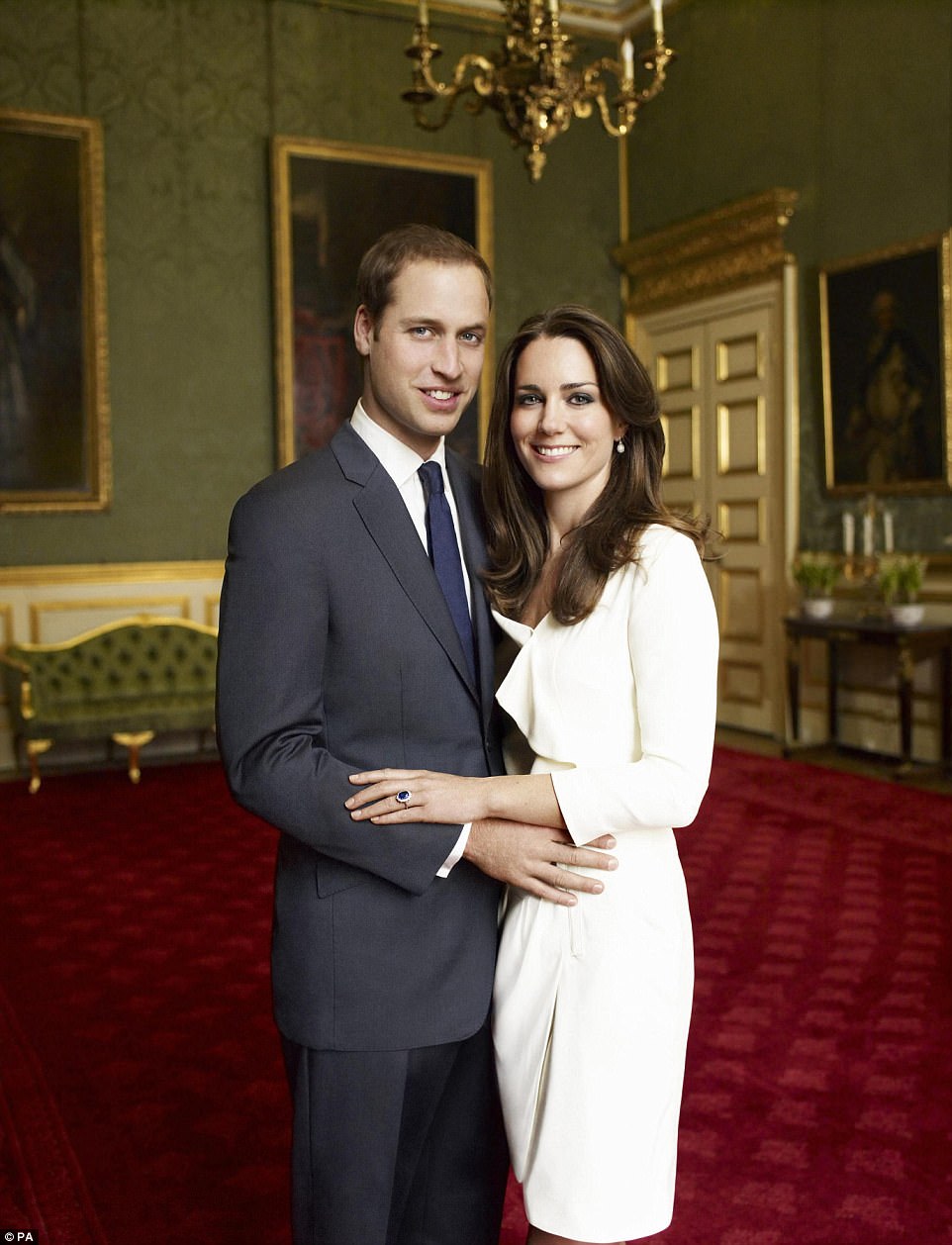 It is a stark contrast from the portraits taken of Prince William and Kate following their engagement in 2010, with the Duchess of Cambridge opting for a dress from high street retailer Reiss

The Duke and Duchess of Cambridge commissioned Vogue photographer Mario Testino for their portraits back in November seven years ago and at the time they were considered to be ground-breaking.

Like Harry and Meghan the couple released a photo of them embracing, cheek to cheek, in casual ensembles including a cashmere jumper from Brunello Cucinell worn by William and Kate snuggling him in a cream blouse.

It seems that Harry has opted for a similar approach to his brother but taking it one step further. The couple, who announced their engagement almost a month ago, stand face to face in an intimate pose.

The duo have both kept the eyes closed and Harry rests his forehead on Meghan’s. The 36-year-old actress can be seen touching her partner’s chin while he wraps her inside his wool coat.

Notably the couple have also opted to have the photo published in black and white, something that has not been seen in a royal engagement since Sarah Ferguson’s engagement to Prince Andrew in 1985.

While this portrait certainly showcases a great contrast to the Cambridge’s there are a few similarities.

The bride-to-be can be see flashing her custom made engagement ring designed by Harry before the camera, most likely at the instruction of her photographer – Alexi Lubomirski. 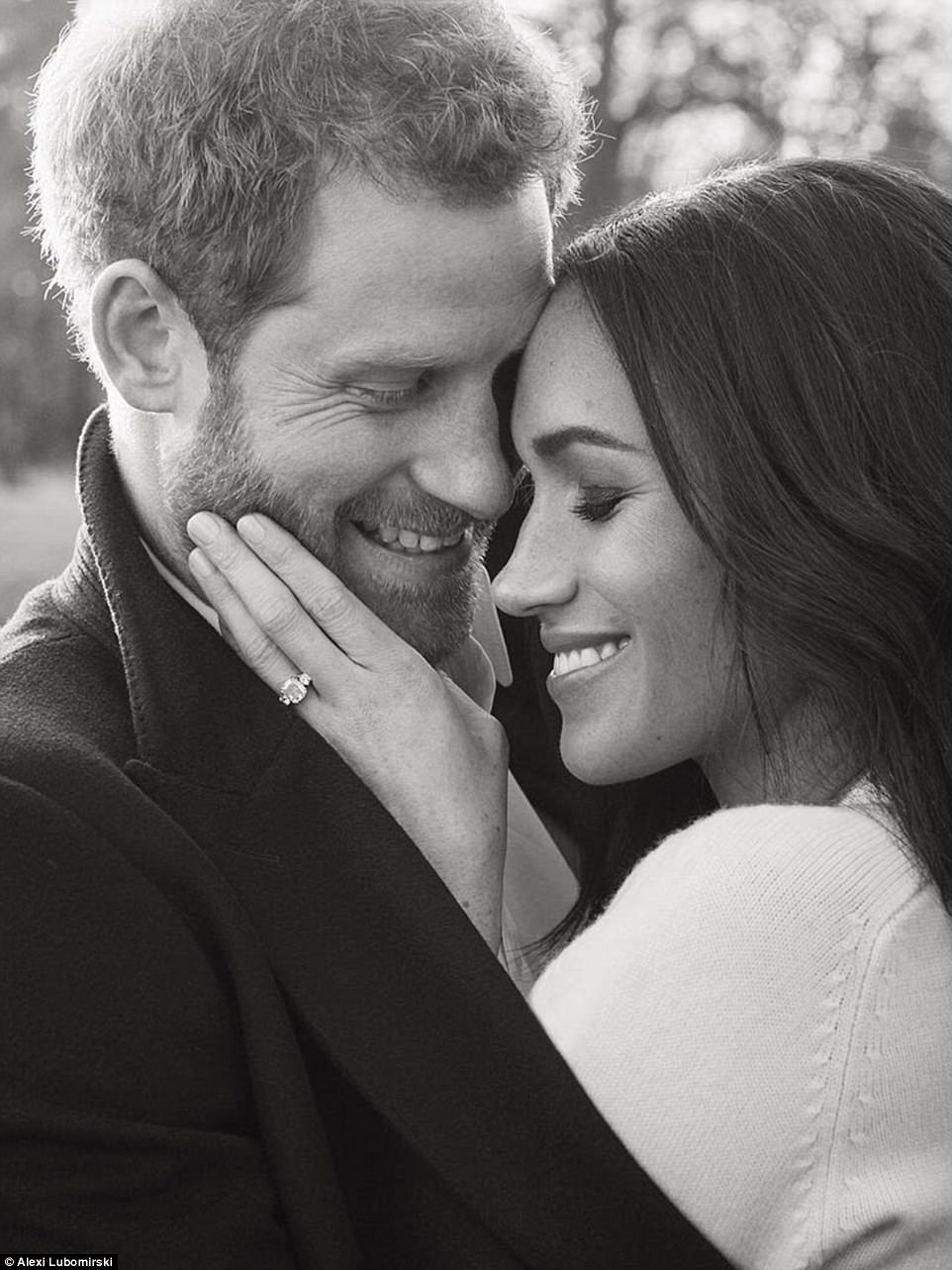 In their second shot we see Harry and Meghan in an intimate embrace seeing them stand face to face, with the couple opting for a black and white filter 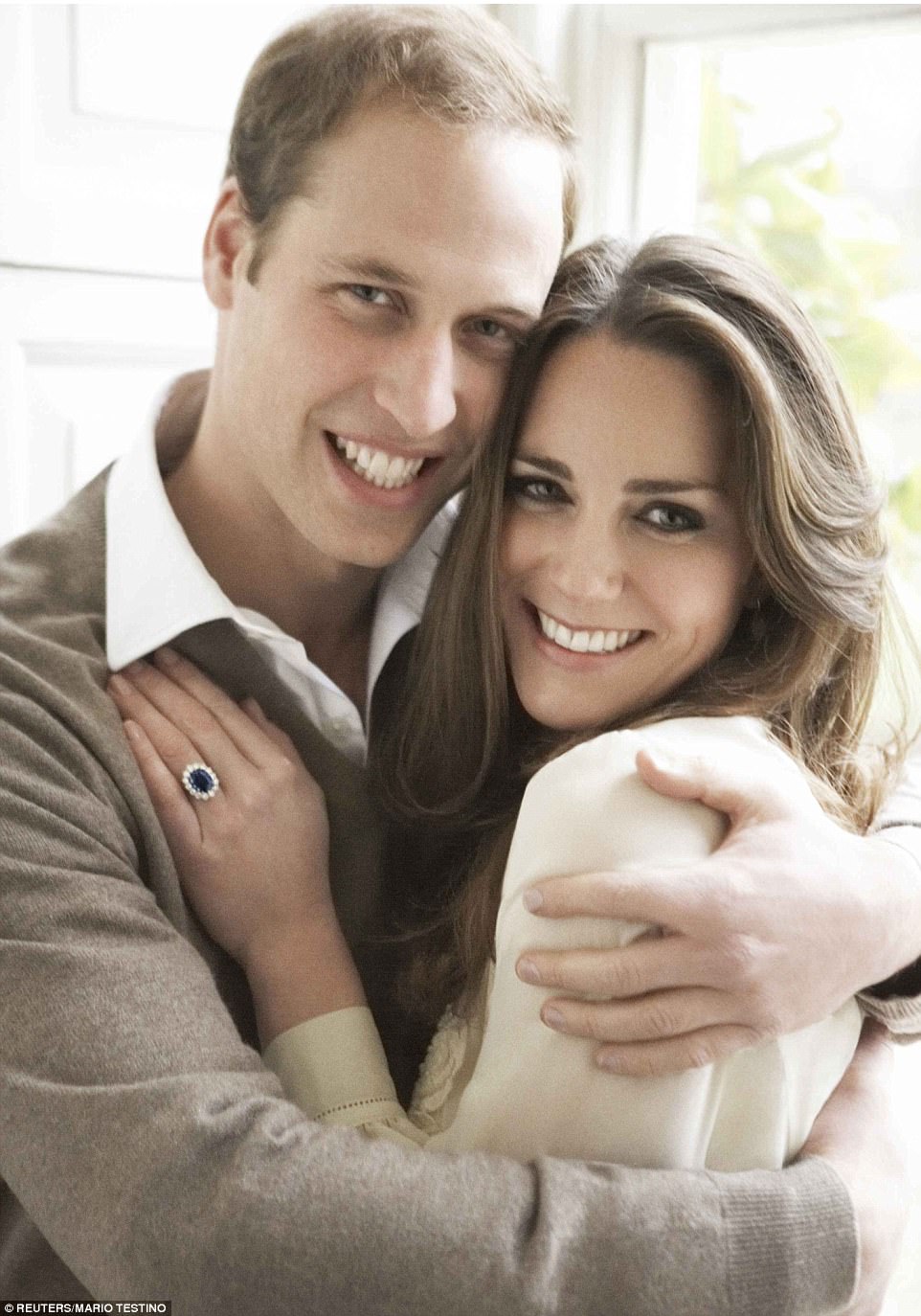 Meanwhile, the Duke and Duchess of Cambridge could also be seen embracing, but stayed cheek to cheek rather than face to face, thought Kate still takes the opportunity to flash her ring

This is similar to the Duke and Duchess of Cambridge’s which saw Kate show off her iconic sapphire engagement ring, famously belonging to Princess Diana.

Meghan and Harry have too chosen to dress down for the photo, with Meghan in a Victoria Beckham jumper and her fiance in a wool coat from Burberry.

However, the choice in clothing could not be more different in the couples’ second photos.

In their second portrait Kate and William stand in the Council Chamber in the State Apartment at St. James’s Palace.

William is dressed in a Turnbull & Asser suit, shirt and tie while his then bride-to-be opts for a high street brand dressed in a cream Reiss dress.

This is a stark contrast to Meghan and Harry. In the second photo the engaged couple sit on the steps of Frogmore House in an informal pose.

While it is not known where Prince Harry’s suit is from Meghan has shyed away from the British high street instead opting for an opulant ball gown costing almost £50,000.

The dress is by haute couture designer dress features a frothy tulle skirt and sheer beaded panel and costs a total £46,650 – though it remains unclear whether Meghan paid for the gown.

One major similarity between the two couples’ photos is their choice in photographer with both opting for one adept with high fashion and celebrity shoots.

Harry and Meghan opted for celebrated fashion and celebrity photographer Alexi Lubomirski, who has snapped everyone from Julia Roberts to Angelina Jolie.

Royal aides said the couple’s choice of photographer didn’t come from a personal relationship – they simply liked his work.

Mr Lubomirski said: ‘It was an incredible honour to be asked to document this wonderful event, but also a great privilege to be invited to share and be a witness to this young couple’s love for one another.

‘I cannot help but smile when I look at the photos that we took of them, such was their happiness together.’

Kate and William’s official engagement photographs were taken by Mario Testino who is known for his work in fashion photography, particularly in Vogue.

According to Testino: ‘They are in their prime and brimming with happiness. I have never felt so much joy as when I see them together.’

While Testino is noted for his work with celebrities he also has an affinity with the royals that Lubomirski.

Testino has been the photographer of choice for many significant Royal occasions. It was Testino to whom Prince Harry turned to mark his 20th and 21st birthdays, when he photographed the third in line to the throne laughing with his older brother and father.

But it is his portraits of Diana with which the Peruvian photographer will always be most closely associated, a fact of which both William and Kate would have been keenly aware. Yet again her son’s desire to include his late mother in his current happiness is clear and, set against all that beige and cream, the deep blue of her former engagement ring draws the eye.