By Eleanor Harding for the Daily Mail

A Cambridge college has removed a 17th century painting from its dining hall because it offended vegans.

Hughes Hall received complaints from students who said the painting, depicting a pile of dead animals, was putting them off their food.

The Fowl Market, from the studio of Flemish artist Frans Snyders, features a striking collection of animals, including a boar and deer, caged hens and game birds strung up on hooks.

The Fowl Market, from the studio of Flemish artist Frans Snyders, features a striking collection of animals, including a boar and deer, caged hens and game birds strung up on hooks. The image is pictured here in its new home in the Fitzwilliam Museum in Cambridge

It had been on long-term loan from the university’s Fitzwilliam Museum.

A source close to the university’s Fitzwilliam Museum, which had loaned out the painting, said yesterday the college wanted to show ‘sensitivity’ to those that ‘do not enjoy eating meat’.

They said there was ‘no agitated situation’ but simply the college had realised it was ‘not the most appropriate’ painting for the hall.

The painting was returned to the museum last year for conservation treatment and now features in an exhibition about the art of food.

A museum spokesman told the Daily Telegraph: ‘Some diners felt unable to eat because it was on the wall. People who don’t eat meat found it slightly repulsive. They asked for it to come down.’

‘This exhibition makes the points that the debate about vegetarianism, about veganism, is nothing new. It dates back to the 1500s.’ 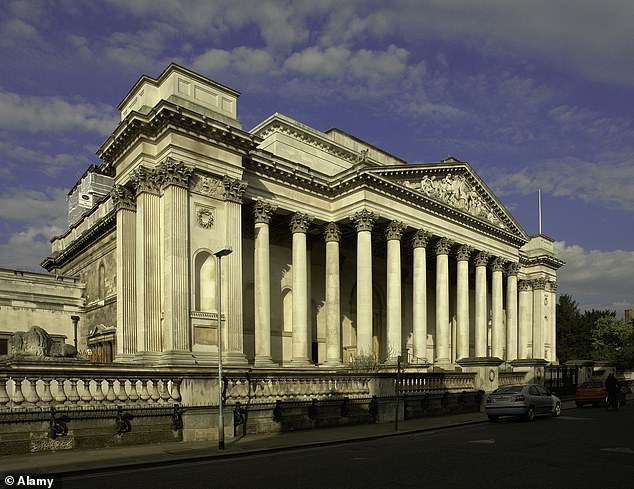 A source close to the university’s Fitzwilliam Museum, pictured, which had loaned out the painting, said yesterday the college wanted to show ‘sensitivity’ to those that ‘do not enjoy eating meat’

The exhibition curators, Victoria Avery and Melissa Calaresu, said in a joint statement: ‘Many people are turning to vegetarianism and veganism as a political choice as much as a dietary one, as we rethink our relationship with animals and their treatment in an industrialised world.

‘Food choices are not only determined by political concerns about what we eat but also compounded by the moral anxieties which resonate around diet, self-image, over-consumption and our bodies.

‘As Feast & Fast demonstrates, many of these contemporary concerns about our relationship with food are not new.’

The canvas was a mid-17th century copy by an unknown artist in the Antwerp workshop of Snyders, who is renowned for his still-life and animal subjects.

The original is in the Hermitage in St Petersburg.

This just the latest in a string of decisions by universities to cater for those with strong views on food.

Earlier this year, Goldsmiths College announced it would be removing all beef products from sale in response to students’ calls to tackle global warming.