The divided states of America: Major health study warns US is at breaking point

Massive health disparities from state to state and deaths by preventable causes persist in the US despite massive spending on healthcare and medicine, the most comprehensive report to date reveals.

In 21 states in the US, people were more likely to meet an early death in 2016 than they were in 1990, a regression that the researchers from the University of Washington warn puts the US behind less developed countries.

States in the Appalachian region and southern US were most heavily burdened by disease, while people in Hawaii, Minnesota, California and the northeast had the best shot at a long, healthy life.

Rises in opioid-, alcohol-, and mental health-related premature deaths were highlighted by the report authors as central drivers to the alarming rates death among people between 20 and 55.

In 21 states, the risk of an early death was higher in 2016 than it had been in 1990, driven by drugs, alcohol, suicide (blue) and obesity a new major report on US health disparities found

The US spent $3 trillion dollars on health care in 2014 alone.

That sum was significantly more than other wealthy countries spent on the same cause that year, yet, two years later, many states in the US have little to show for the investment the government ostensibly made in their health.

While age groups that were once seen as most vulnerable – infants, children and those over 55 – have seen improvements in expected health outcomes, the age groups that should be most robust – the wide swath between 20 and 55 – are suffering more, according to the report.

Rising death rates in 21 states in this age group are ‘strongly linked to the burden of substance use disorders, cirrhosis and self-harm,’ the study authors wrote.

‘We are seeing dangerous disparities among states,’ said Dr Christopher Murray, director of the Institute for Health Metrics and Evaluation (IHME) at the University of Washington, which organized the study.

‘Unless and until leaders of our health care system work together to mitigate risks, such as tobacco, alcohol, and diet, more Americans will die prematurely, and in many cases, unnecessarily,’ he warned.

Alcohol-related diseases pervade New Mexico, where the number of healthy years lost to drinking were more than double the national average.

The increasingly dire state of mental health in the US was nowhere more obvious than in Utah, where nearly 10 percent of all lost years of life were due to suicide – as compared to Washington, DC, where rates were one-third that high.

Nationwide, depression and anxiety accounted for nearly 30 percent more of Americans’ disabilities in 2016 than they did in 1990.

‘These findings serve as compelling evidence of the need to increase mental health care and screening, as well as programs seeking to prevent mental disorders and to promote mental health,’ said study co-author, Dr Murray.

The sorry state of health in Appalachia has been widely documented, and the new report reaffirms that rates of poverty, smoking and obesity persist there.

Coupled with limited access to health care and the high prevalence of drug use in the area, it has continued to be disproportionately burdened.

The opioid epidemic has been in headlines daily, but awareness has hardly dampened its deadly and disabling march forward.

The new report also measured disability-adjusted life years, a way of quantifying how many ‘good’ years of health are lost collectively due to illness, disease, disability and early death.

In 1990, opioid use disorders ranked number 11 among the health problems depriving Americans of healthy years. By 2016, drug-related infirmities had risen to number seven on that list. 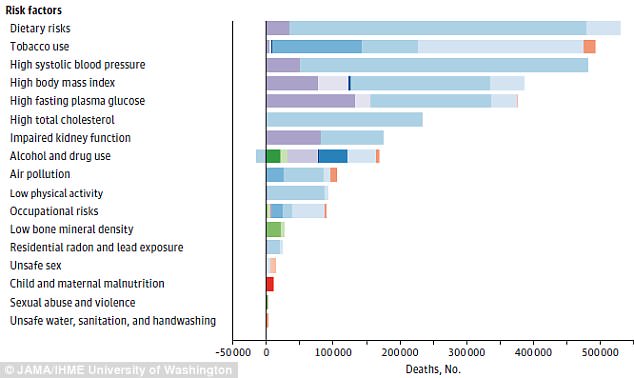 Rises in death rates in the US are driven by risk factors like poor diet and smoking, the study found

The opioid epidemic is estimated to cost the US more than $500 billion a year in hospital and criminal justice expenditures and lost productivity.

‘The strain on America’s health resources is getting worse, and the need for prevention services and greater access to and quality of medical care is increasing,’ said study co-author Dr Ali Mokdad.

But the struggling state of health in the US is not solely attributable to the opioid epidemic.

High rates of these largely preventable diseases are easily traced to the persistent hold of unhealthy lifestyle choices on Americans.

‘To an increasing degree, overweight, obesity and sugary diets are driving up health care costs and are costing Americans years of healthy life,’ said Dr Murray.

‘They are undermining progress toward better health,’ he added.

The federal government allocates nearly $50 million toward the prevention of obesity, but the new study suggests that the issue is not so much what is spent on pro-health initiatives, but how it is spent.

‘Local, state, and federal dollars need to be targeted more effectively for primary care, especially for those millions of Americans not on Medicare,’ he added.