The EU is drawing up plans for no deal Brexit

Brussels is drawing up plans to prepare for Britain crashing out of the EU without a deal, a senior adviser to Michel Barnier today warned.

Stefaan De Rynck said the EU is ‘preparing’ for a no deal Brexit but that is ‘not a scenario’ it wants.

His remarks fly in the face of comments made by EU Council President Donald Tusk who earlier this month said the bloc was not preparing for a no deal outcome.

While French President Emmanuel Macron said on Friday Theresa May’s threat to walk away with  no deal rather than get a bad one was all ‘noise, bluff or fake news’.

De Rynck dismissed claims by Brexit Secretary David Davis that Brussels will push the deal down to the wire.

Stefaan De Rynck, pictured in London today, said the EU is ‘preparing’ for a no deal Brexit but that is ‘not a scenario’ it wants

And he said a transition deal could be ‘wrapped up very quickly’ but only once progress has been made in divorce talks.

Speaking at the Institute for Government in London today, Mr De Rynck said the EU does not want to ‘add risk’ to the exit process by ‘playing with time’.

He added: ‘On going to the wire, we would certainly want to avoid that.

‘Brexit is a process we want to manage in a calm and rational way.’

His comments come as the Government today finally announced it will bring the flagship Brexit Bill back to Parliament next month – after a delay of over four weeks.

Britain and the EU have had five round of Brexit talks but have still not a greed to move on to the next stage of negotiations which would include looking at a trade deal.

Mr De Rynck said failing to reach a deal would harm both the European Union and Brussels.

He said: ‘There is a clear negative impact from no deal, I think that that is clear, for both sides but especially for the UK economy. But it is not a scenario people want to work towards.

Mr Tusk said the rest of the bloc was not preparing for a no-deal outcome saying: ‘EU27 is not working on ‘no-deal’ scenario,’ he said.

‘We negotiate in good faith and hope for ‘sufficient progress’ by December.’

Mrs May travelled to Brussels earlier this month to urge leaders of the member states to move on to trade talks. 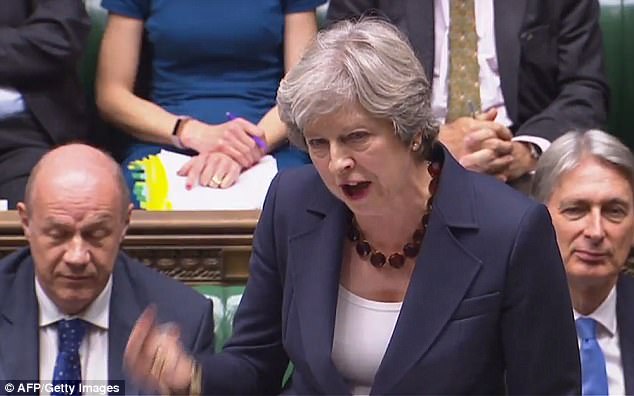 Theresa May, pictured in Parliament this week, has said she will lead Britain out of hte EU without a deal rather than accept a bad deal from the bloc

But her hopes were dashed after EU chiefs said more work was needed first on the divorce talks – including the financial bill, citizens rights and the Irish border issues.

Mr De Rynck said ‘sufficient progress is not far away’ but more progress needs to be made.

Britain must set out how it believes the divorce bill should be calculated to ended the deadlock over money, he told the IfG.

He said: ‘In terms of sufficient progress we need a method to be able to reassure the 27 of the solidity of the UK guarantees on how it will honour its commitments.’

Any transitional period would have to be ‘time limited’, Mr De Rynck insisted.

‘In terms of the guidelines for the future relationship as well as the possible transition, all of that can all come very quick,’ he said.

‘There is certainly a time pressure on all of us and nobody has any interest in slowing down the clock.’