The Evans family enjoy an upgrade to their favourite small car

How do you improve on perfection? Why would you even try? Take the banana (of which I’ll be eating several this morning during what is forecast to be an extra-sweaty Virgin Money London Marathon). Not only is the banana naturally perfectly packaged and the ideal size for a healthy human snack, but also, if peeled the right way – like apes do, not upside down like we do – the stalk acts as a natural handle. Like a lolly stick or a chicken leg. God even decided to make them bent at the end – and yellow, to add a little vulnerability and make us like them even more.

It’s the same with the Volkswagen Up! Beats, except VW forgot the bent and yellow bit. Other than that, they too are perfect. So perfect that we immediately bought one off the back of a test drive for this very column in 2016. 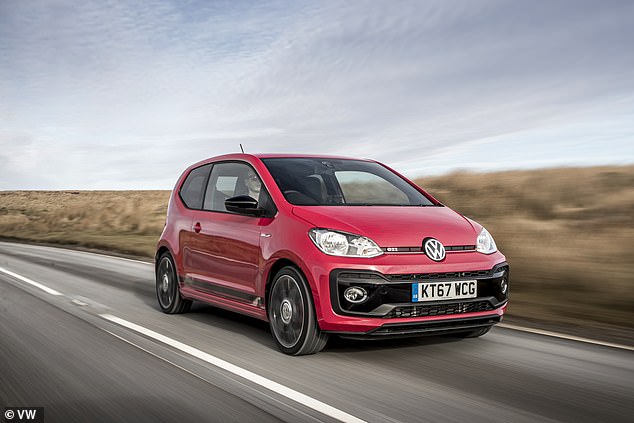 It’s amazing what VW has achieved: 115hp, 200Nm of torque, a hugely efficient power-to-weight ratio and an incredible top speed of 126mph

And we still love our Up! We love it every day in every way. We love it in the rain, the sunshine, the snow, on the school run, on the weekend, in town, on the motorway, picking up the Saturday-night takeaway. My wife loves it because it makes her happy every time she looks at it, jumps in it or effortlessly slots it into a parking space that would be far too titchy for most other cars. The kids love it because of the Beats sound system and the fact that Mum drives it like she stole it. I love it because of its simplicity – the world should be more like an Up! It still looks brand new, resplendent in white and black with its cheeky red wing mirrors.

But if there is an even better Up! out there, we want to see it, smell it, stroke it and lick it. The fact that this new one also happens to have G, T and I emblazoned on its torso only adds to our intrigue.

Not wanting to miss a second of the seven days the Up! GTI was to be made available to us, we dispatched a panicky email to VW’s head office: ‘Please may we request the test car be delivered to a mutually convenient location instead of our usual gaff, as we are currently on holiday?’

The Mulberry Inn it was then, in Surrey. My pub, my car park, VW’s car – for now.

‘You might never see it again,’ my editor had warned VW the week before. ‘Actually, we have discussed that possibility,’ came the nervous, half-joking reply.

‘How is it different?’ wondered Eli, aged five.

Let’s go with the five-year-old.

The GTI’s physical upgrades from the standard Up! include the fact that it’s lower with a bigger, racier exhaust, a roof spoiler, bigger disc brakes, bigger alloy wheels, plus, of course, the aforementioned mandatory GTI badging, go-faster red stripes (on the grille) and go-faster black stripes (on the sills).

Inside, the makeover faithfully continues to pay homage to the GTI legend with the classic tartan cloth seat trim, a GTI-badged gearstick, a Golf-style, flat-bottomed, hand-stitched-leather steering wheel and shiny new red dash trim. So what happens when you turn the key? 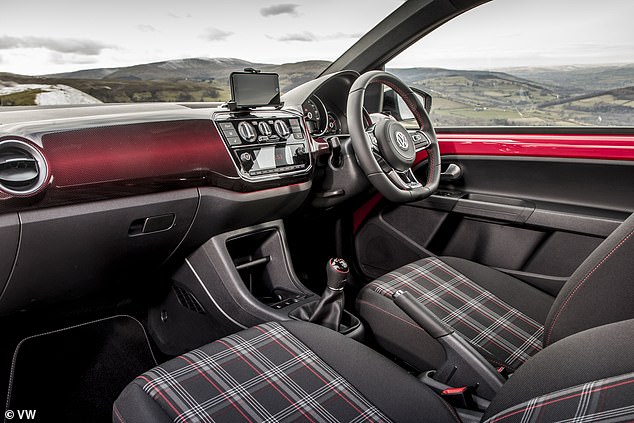 Inside, the makeover faithfully continues to pay homage to the GTI legend with the classic tartan cloth seat trim

A growl. That’s what. Well, a sort of growl. More of a solid thrum. But a huge thrum as thrums go, especially considering it comes from a minuscule 1.0-litre, three-cylinder engine. It is turbo-charged, however, a fact that becomes obvious the moment you drop the clutch and sense the power bubbling from deep within. It’s not as instantly nippy as I thought it might be, just like the first Golf GTIs back in the day, which always looked much faster than they turned out to be. But the gears are long and strong. From a standing start in second, ease the clutch out ever so gently and you can hit 50mph before even thinking about changing up into third. Astonishing – and with three gears still to go! The mid-range pull all the way up the box is extraordinary for such a dinky car. Many eyebrows were raised.

You might want to whisper this, but I think it’s more like a mini Golf R than a mini Golf GTI – no bad thing, as I prefer the Golf R as a drive but prefer the look of the Golf GTI. It’s amazing what VW has achieved: 115hp, 200Nm of torque, a hugely efficient power-to-weight ratio and an incredible top speed of 126mph.

The chassis and suspension have been stiffened and strengthened to cope, which means a slightly firmer and noisier ride, but not to the extent of any discomfort. There is a bit of body roll, but only when cornering like a boy racer on a diet of Space Dust and Fizz Bombs.

The usual attendant Up! misgivings remain, like the fact that anyone over 6ft will struggle for leg room in the back and the majority of in-car entertainment and satnav has to come from your smartphone as opposed to VW. But that’s been standard practice for all Up! owners thus far and it’s not been a deal-breaker. The Beats sound system might be, however, as it only comes as a £370 extra this time around.

That particular issue notwithstanding, the big question is, would Mrs Evans and the children now trade in our Up! Beats for an Up! GTI? Answer: yes. Or at least it was until Noah threw in a curveball.

‘Dad, Mum says that when the twins arrive she will need the Land Rover Defender cos it’s got seven seats and you will be in the Up!’

Where was he going with this?

‘And you know how much you love Skodas?’

Good point young man, but I still think I’d opt for an Up! GTI.

‘OK then, how about if they produced a Citigo VRS – in LIME GREEN?’

Ooh son, now you’re talking. But they wouldn’t. Would they..?