The Florida shooter’s brother may have posted on Facebook

A Facebook account appearing to belong to the brother of Florida high school shooter Nikolas Cruz has posted a thank you message.

The post made by the account under the name of ‘Zachary Cruz,’ has led to speculation that the 18-year-old has broken his silence, following his 19-year-old brother’s admission to shooting and killing 17 people.

‘Appreciate all the positive messages [heart emoji],’ the post read, which was published on Saturday at 11.06pm Eastern.

The profile photo for the account was posted on Sunday at 4.24am ET, and appears to show a young Zachary Cruz with his half-brother.

The features of the two children in the photo appear very similar to a picture taken between November last year and January which shows them holding the ashes of their adoptive mother, Lynda Cruz.

A social media account listed as belonging to ‘Zachary Cruz,’ which is the name of the brother of Florida high school shooter Nikolas Cruz, 19, has published a post on Saturday; This is the profile picture used by the account, published early on Sunday morning 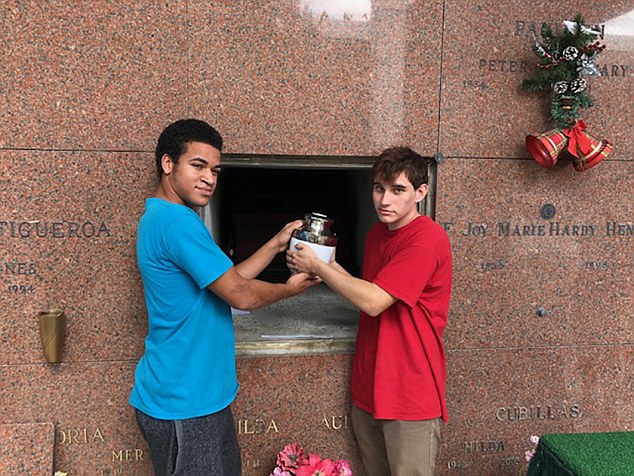 The features of the two children in the profile’s default photo appear very similar to the features of this verified photo of the real Zachary Cruz and his half-brother, taken some time between November and January, as they are holding the ashes of their deceased adoptive mother, Lynda Cruz

Zachary Cruz was previously reported as having been held for psychiatric evaluation in Palm Beach, Florida since February 16.

If this account does, in fact, belong to him, the post may mean he has been released from the mental health facility.

The post was made viewable to the public, and has been collecting all sorts of comments from other Facebook users.

One user recommended that the owner of the account, which apparently the user assumed to be the real Zachary Cruz, should write a letter to the Florida high school shooter. 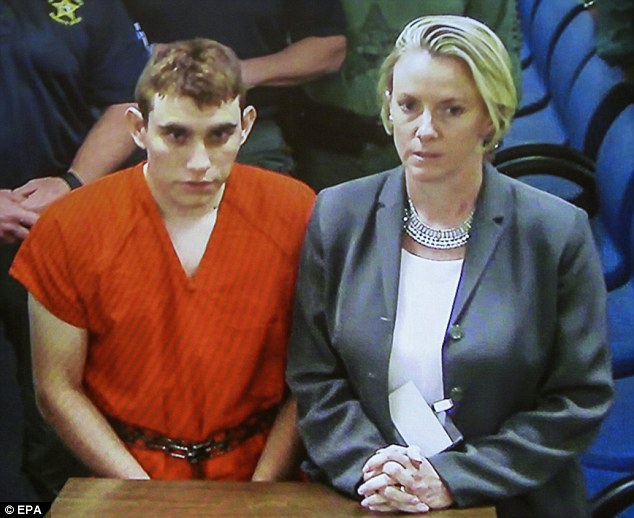 Florida high school shooter Nikolas Cruz, 19, faced court briefly on February 15 as he was officially charged with 17 counts of premeditated murder over the massacre 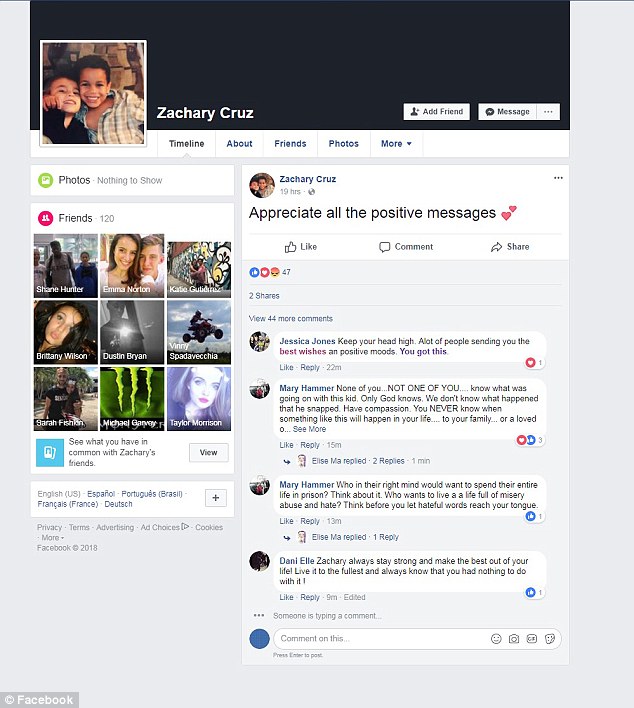 ‘Appreciate all the positive messages [heart emoji],’ the post read, which was published by a Facebook account purported to belong to a ‘Zachary Cruz’ on Saturday at 11.06 pm Eastern

Another user, listed as ‘Amber Morris’ wrote: ‘Praying for you, your brother, and your community. Love and support from SC.’

That particular comment prompted two replies, seemingly taking issue with the user’s inclusion of prayers for the shooter.

‘Gil Anderson’ wrote: ‘How about praying for the 17 victims and their grieving families? Wow!!!’

‘Rebecca Alexa’ made that point more clear, writing: ‘Pray for HIM [apparently, Zachary] and pray for the dead. No one else deserves prayers.’

A user listed as ‘Amber Morris’ wrote: ‘Praying for you, your brother, and your community. Love and support from SC,’ to which ‘Rebecca Alexa’ replied: ‘Pray for HIM [apparently, Zachary] and pray for the dead. No one else deserves prayers’

Several users made comments to the effect that they were praying for the real Zachary Cruz, who this account may or may not belong to, and his shooter brother

One user recommended that the owner of this account, which apparently the user assumed to be the real Zachary Cruz, should write a letter to the Florida high school shooter

To these comments, ‘Amber Morris’ replied: ‘Gil Rodriguez when I say community, I’m referring to the families, friends, and the community as a whole, everyone effected. I’m praying for all involved. If you came to hate thee are plenty of pages and posts for that.’

Other shared sentiments of support for the poster, as well.

‘Benajmin Scot Arnesty’ wrote: ‘You have so many allies out here! The truth never dies! Stay strong.’

This was confusing for some, like user ‘Rebecca Alexa’, who replied to this comment, as well. She posted: ‘What truth exactly? We know the truth….16 kids and a teacher were murdered.’

Commenters were outraged at messages of support that referenced Zachary’s shooter brother, like this one from ‘Miley Rees,’ which said: ‘Sending love and best wishes to you and your brother from the UK. There’s a lot of people rooting for you both.’

The users mentioned above, both ‘Gil’ and ‘Rebecca,’ called this ‘Miley Rees’ a ‘sick young lady’ and ‘mentally ill.’

Deschamps is the woman who took in Zachary and his half-brother, following their adoptive mother’s death from issues related to pneumonia in November. She was also a former neighbor of the family, prior to the death of Lynda Cruz, age 68.

Zachary has been living with Deschamps this entire time, but his shooter brother moved out in January, reportedly over a dispute over his gun collection.

‘Benajmin Scot Arnesty’ wrote: ‘You have so many allies out here! The truth never dies! Stay strong,’ in a post that confused some users on social media

It’s also been reported that Deschamps, 42, is the person who caused Zachary to be held for mental evaluation.

Chad Bennett, 37, a friend of Deschamps, told DailyMail.com that police were told, wrongly, that the teen would ‘finish what his older brother started,’ but did not say who said it.

On February 15, which is the day before Zachary was involuntarily committed, and one day after his half-brother admitted to the tragic Florida high school shooting and massacre, Deschamps filed to be named administrator of Lynda Cruz’s estate.

She filed on the grounds that she was ‘in charge of a 50 percent minor beneficiary’ to the estate, at the time. The estate is estimated to be valued at around $800,000, after the payment of outstanding liabilities.

If appointed, Deschamps will not have access to the assets of the estate  for her personal use, but may be paid an administration fee out of those assets, to be determined by the court.

The shooter, who remains locked up at the Broward County Jail, was charged with 17 counts of premeditated murder the following day.

Even if convicted, the shooter may still receive his inheritance, which was reported as coming due to him at the age of 22.

Experts have said that if he does inherit money from the estate, he will likely never see any of it, due to potential civial lawsuits related to the shooting.

Nikolas Cruz also injured 15 others when he opened fire with an AR-15 at Marjory Stoneman Douglas High School in Parkland, Florida on February 14.