The future of flying? On board the ‘eerie’ flight with just TWO passengers

The future of flying? On board the ‘eerie’ flight with just TWO passengers

A businessman was one of just two passengers on board an ‘eerie’ flight in New Zealand, as locals avoid Auckland amid a recent outbreak.

‘They gave me a personalised boarding call which was quite humorous. I thought I was running late but then I realised there was only two of us on the plane,’ he told the New Zealand Herald.

‘I ran to the counter, then they said it’s you and someone else. When I stepped on, it was me, myself, and I and someone in row 28 down the back!’

Cameron Bagrie took an Air New Zealand flight from Wellington to Auckland on Thursday morning, but was one of just two passengers on board amid the country’s recent COVID-19 outbreak

Mr Bagrie was meant to travel to Invercargill for work, but had to return home to Auckland because of coronavirus restrictions following the nation’s first cases in 101 days.

Auckland is currently in level 3 lockdown after being rocked by the deadly virus’ return into the community after 102 days without local transmission.

Locals been told to stay in the region unless their trip is for an essential service.

Kiwis from other cities are avoiding Auckland, leaving hundreds of seats empty on planes.

Mr Bagrie said that while he was prepared for an uncrowded flight, he was taken aback by the ‘eerie’ feeling of being one of the only people on board.

‘It was quite eerie, It was like ‘wow’. This is the ultimate social distancing. I’m in 2C and the other gentleman is down the other end of the plane,’ he said.

The economist heaped praise on the Air New Zealand staff for being the ‘ultimate professionals’ during the bizarre flight.

The new positive tests, as well as one probable case, take the Auckland cluster to a likely 22 people.

‘The modelling suggests that a cluster like this will grow,’ Ms Ardern said. 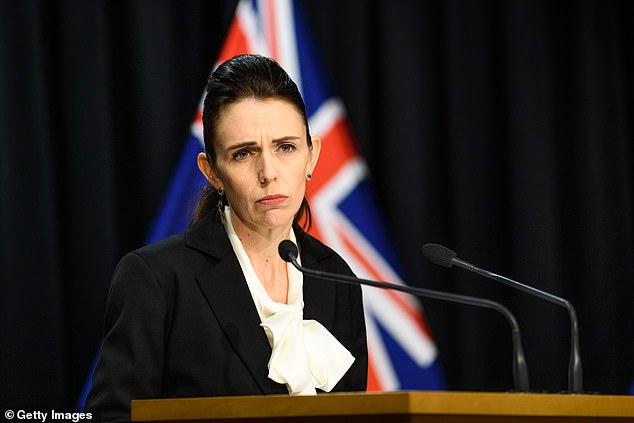 ‘But it’s not a sign that it’s escalating beyond our capacity, it’s just the behaviour of clusters.’

On Tuesday, the discovery of four cases prompted Ms Ardern to announce a 60-hour lockdown the country’s biggest city, which began at midday on Wednesday.

Health officials have moved swiftly to locate, isolate and test close contacts since then.

For the first time since the pandemic’s arrival, community cases will be asked to relocate to mandatory isolation facilities previously used for arrivals at the border.

One of the new positive cases confirmed on Thursday is a student at Mount Albert Grammar, the country’s second-largest school with 3,000 pupils.