TV’s gender AGE gap revealed: Male presenters are twice as likely to be employed past the age of 50 as women – with up to 22 YEARS difference between presenters on popular shows

The age gap between male and female presenters on British TV has grown significantly in the past decade and women are only half as likely as their male colleagues to be employed past the age of 50, according to new research.

Dr Judy Todd, a consultant anaesthetist from University Hospital in Ayr, Scotland, found that the gender age gap has grown to an average of seven years and 11 months, and only a quarter of female TV presenters are employed over the age of 50, whereas more than half of male presenters are 50 plus.

The age gap on the ITV show This Morning is 11 years between Philip Schofield aged 57 and Holly Willoughby, 38 (pictured)

In the past ten years the gender age gap has increased by nearly two years and the average age of female TV presenters is 44 years and one month, whereas for men it is 52-years-old.

Dr Judy explained: ‘Our gender age gap research has exposed a glass ceiling of opportunity for women on TV after the age of 50.’

‘The vast majority of women are basically being written off when they reach 50 and it’s hard to see any other reason for this other than they don’t look as telegenic, attractive and youthful as they used to.’

The average age of female presenters has risen since 2010 from 40 years two months and average male presenters’ age was 46 years nine months.

It has not kept pace with the rate of increase of men’s ages and the age gap has grown 18% from six years seven months to seven years and 10 months today.

Last year the broadcasting industry was rocked by the gender pay gap scandal which showed that women earned up to 22 per cent less than male colleagues doing the same job, but now another major disparity of working conditions has been exposed.

The gender age gap was seen to run across most sectors of broadcasting including entertainment, sports and news and current affairs.

‘The gender age gap has grown significantly in the past 10 years and something needs to be done to prevent what is a clear case of discrimination.’

‘It is not just a problem in the broadcasting industry. There is growing discrimination for mature women in the UK to get jobs and promotions after they hit 50.’

‘Many of my female clients in their mid to late 40s tell me that job opportunities for women become seriously reduced after 50, which is one of the main reasons why they are having aesthetic rejuvenation treatments.’

The only mainstream show on terrestrial TV which had older female presenters than the men was Bake Off on Channel 4. 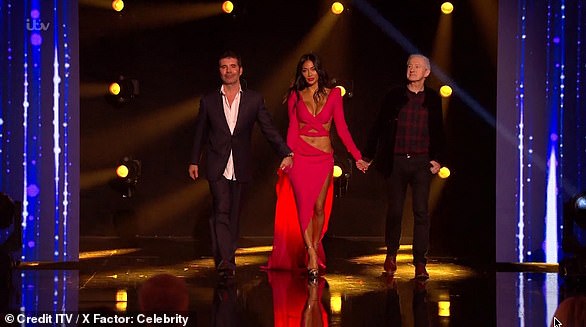 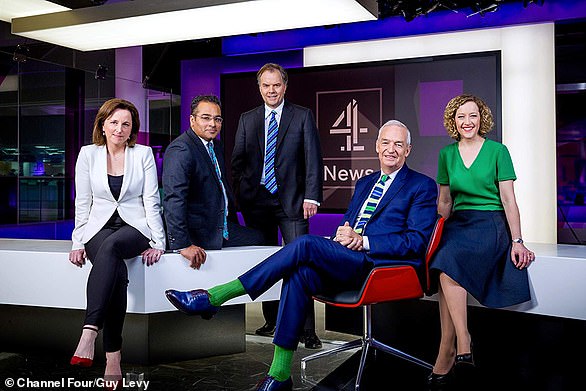 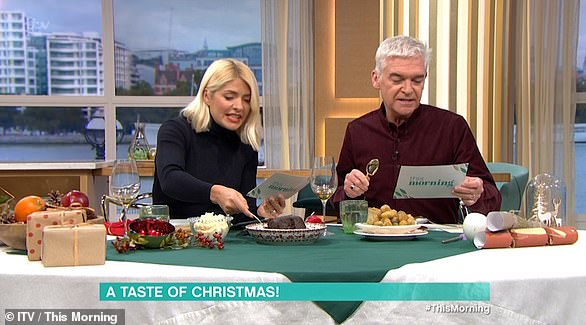 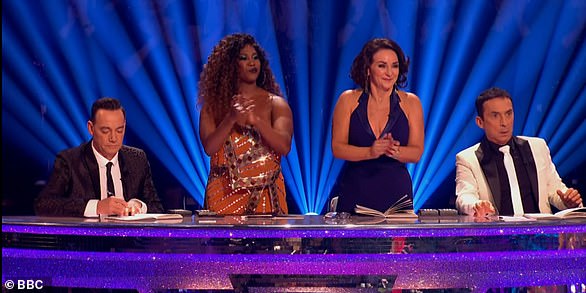 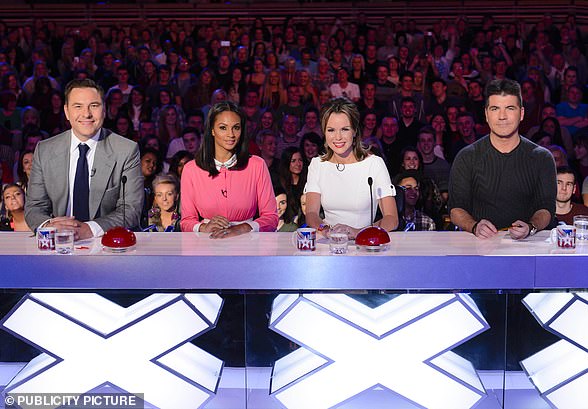 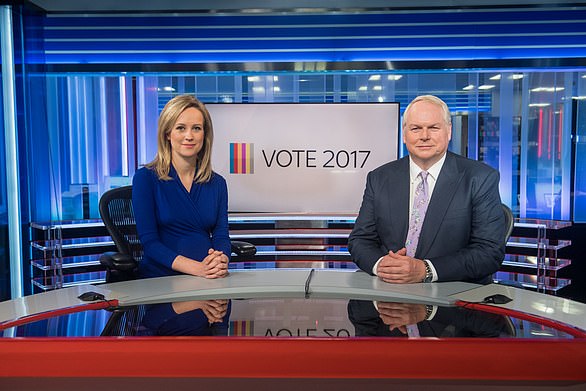 Adam Boulton, 60, pictured right with Sophy Ridge, was amongst the men considered in the age gap research 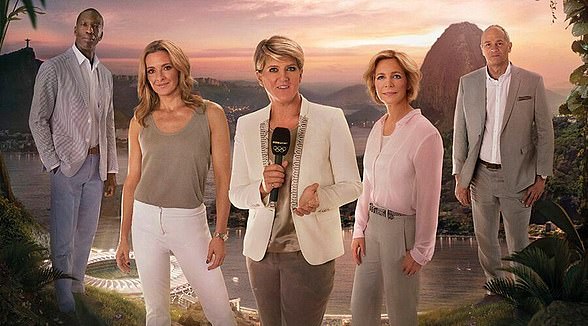 At last year’s Olympics, the average age of female presenters and pundits was 42.9, but the male presenting team was 51.2. Those considered included Gabby Logan, 46, and Clare Baldwin, 48 (centre) 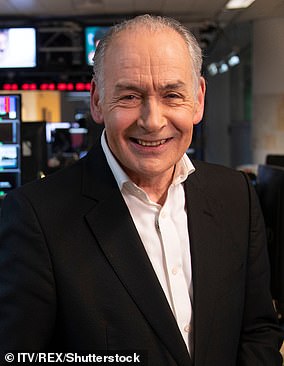 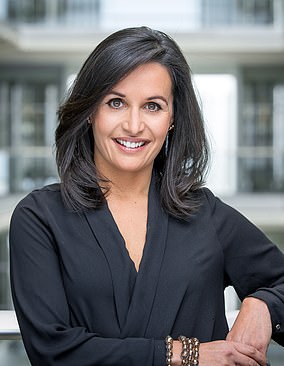 The findings found the ITN news presenters have an age gap of six years and eight months. Pictured, Alistair Stewart, 67 (left). Nina Hossain, 45 (right) was amongst the ITN news female colleagues considered in the findings – along with Mary Nightingale, 56 and Julie Etchingham, 50 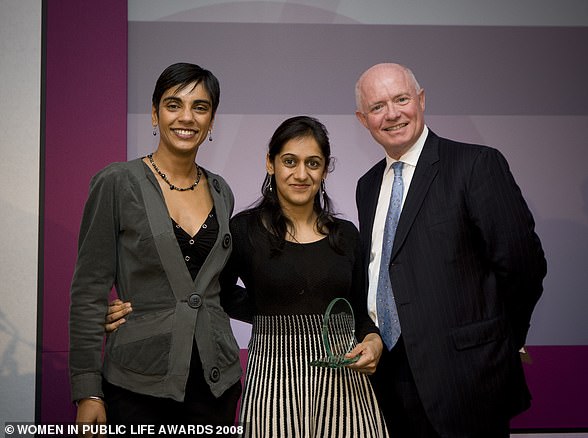 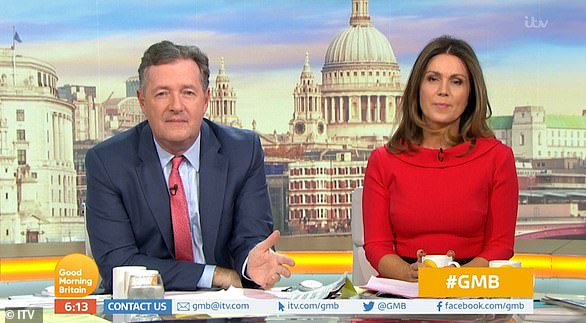 Good Morning Britain is presented by Piers Morgan, 54, and Suzannah Reid, 48 (pictured together on the show) 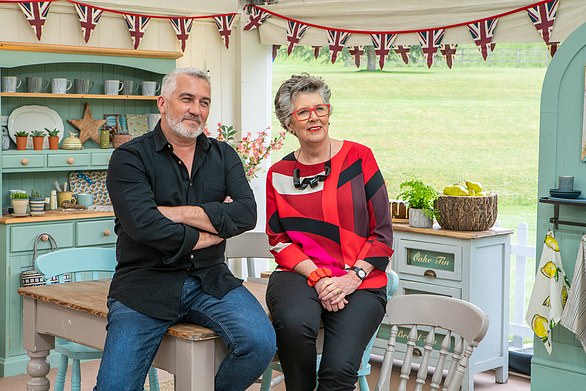 The Great British Bake Off was the only mainstream show on terrestrial TV which had older female presenters. Pictured, Paul Hollywood, 53, and Prue Leith, 79