At the height of his power, Cardinal George Pell blew $750,000 on luxuries like fancy gowns and extravagant furniture while living in a $30 million flat.

But soon he will likely swap his $3,600 tailored robes for a prison jumpsuit and make do with just $140 a month after being convicted of molesting two choir boys.

The Catholic Church’s third highest-ranking official will be behind bars as early as Wednesday as he awaits sentencing next month.

At the height of his power, Cardinal George Pell blew $750,000 on luxuries like fancy gowns and extravagant furniture while living in a $30 million flat – but now he’s going to jail 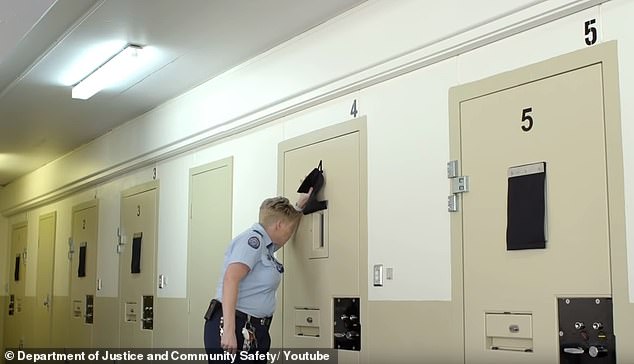 Soon he will likely swap his $3,600 tailored robes for a prison jumpsuit at Melbourne Assessment Prison (pictured)

Victorian County Court chief judge Peter Kidd made clear when Pell, 77, was convicted in December that jail was the only appropriate sentence.

He would first be sent to Melbourne Assessment Prison while authorities decide where to send him for potentially the last years of the frail priest’s life.

Pell was fond of showing children his genitals, but he will probably enjoy the humiliating strip search and medical check he will endure on arrival far less.

Those would be repeated before and after every visit he had from the outside world, if any fellow clergy still dared to be associated with him.

Pell would likely be locked in isolation behind a door marked ‘X’ because of his high profile, spending 23 hours a day in a suicide-proof cell.

For an hour a day he would shuffle under guard to a small exercise yard rimmed with razor wire, feeling the sun on his face with only watchful guards for company. 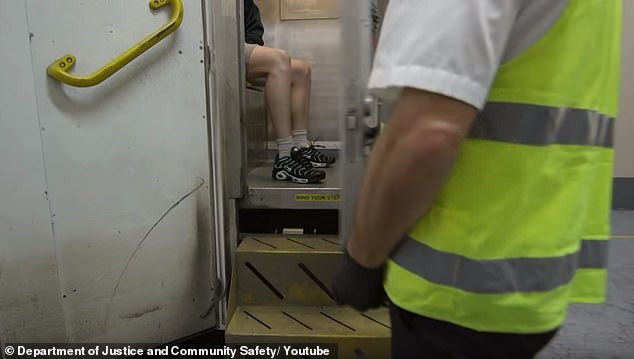 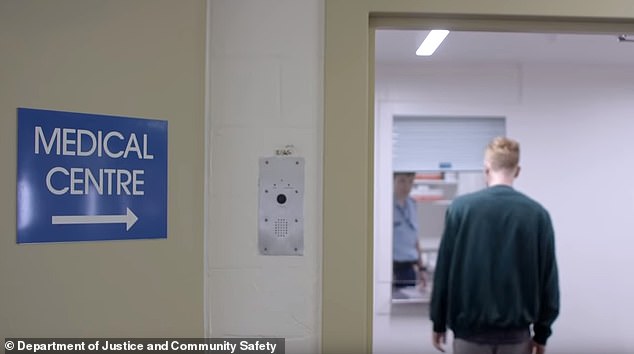 Pell was fond of showing children his genitals, but he will probably enjoy the humiliating strip search and medical check he will endure on arrival far less 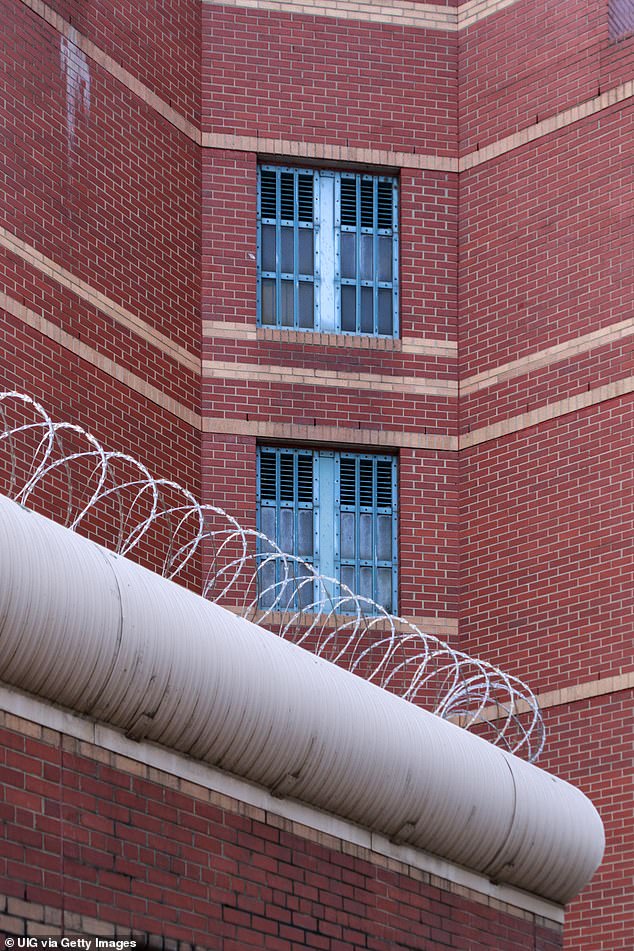 For an hour a day he would shuffle under guard to a small exercise yard rimmed with razor wire, feeling the sun on his face with only watchful guards for company

As a paedophile, Pell would face a very hostile reaction from other inmates if he was put in with the general population and would likely be attacked.

His meager allowance, a far cry from how he lived it up in Rome, will have to pay for his meals, telephone calls, and toiletries.

This humbling, tedious existence would be a steep fall from grace after he spent $750,000 of church money just a few years ago.

Pell was picked by Pope Francis to slash waste in the church as its chief financial officer, but posted a hefty bill setting up his Vatican pad.

Staying at the $30 million Domus Australia guesthouse in Rome, at a cost of $5,100 along with an office, he also employed an Australian assistant for $21,000 a month. 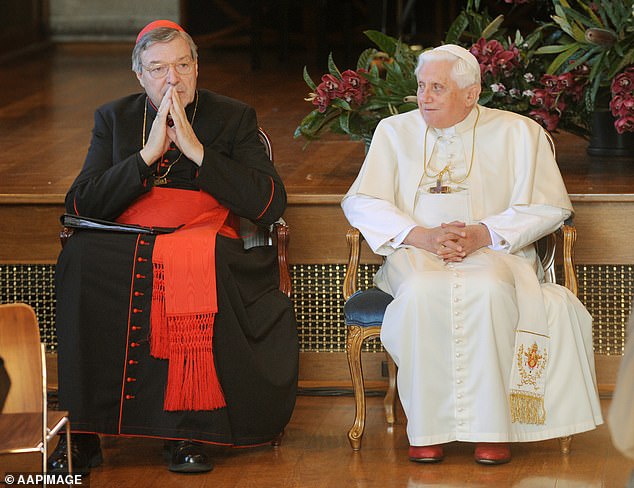 His meager allowance will be a far cry from how he lived it up in Rome. He is pictured with Pope Benedict XVI in 2008 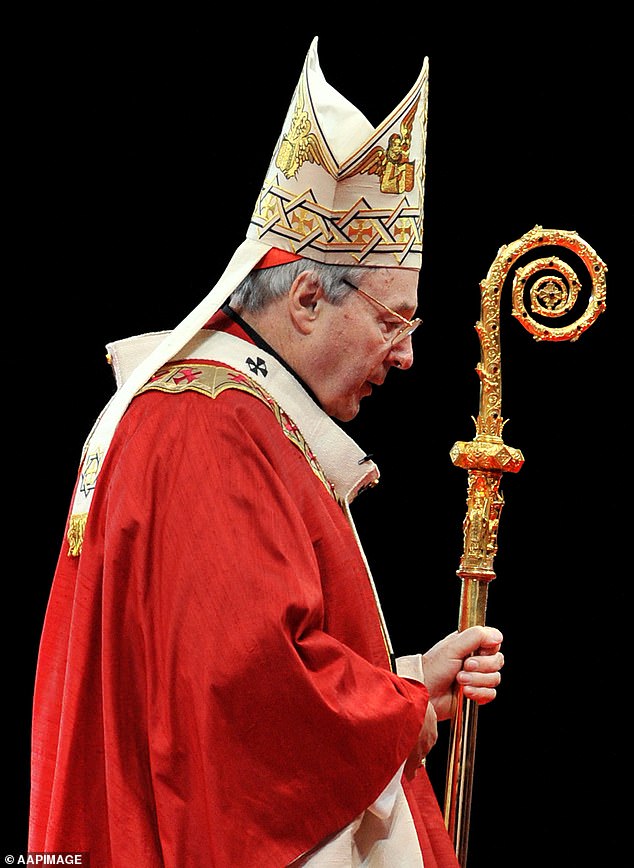 This humbling, tedious existence would be a steep fall from grace after he spent $750,000 of church money just a few years ago 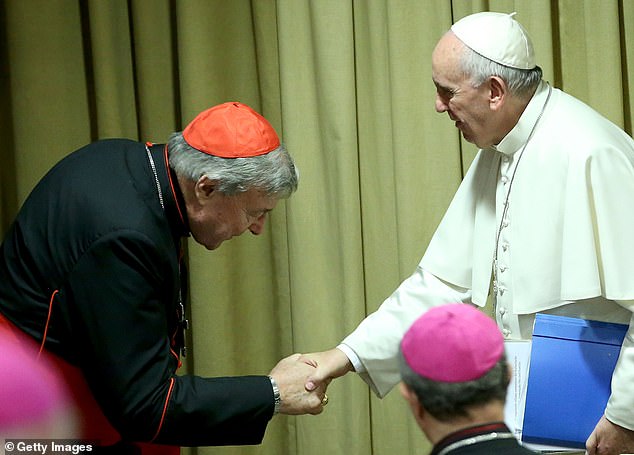 He kitted out his new digs with $87,000 worth of luxury furniture, including blowing $6,650 on kitchen sink fittings.

Other luxuries included $3,600 on tailored religious robes and thousands more on business class flights around the world.

All that is gone and replaced with a cell where the ageing cleric, who was only allowed to stay free after his conviction to get a double knee replacement, may die.

Pell may be reunited with an old friend, fellow paedophile priest Gerald Ridsdale, whom he was housemates with in Ballarat during the 1970s.

The 84-year-old, who abused 65 boys as young as four, has been in jail since 1993 and is serving the last years of his sentence at Langi Kal Kal.

The minimum security prison, where Pell could be sent, is populated almost entirely by sex offenders and get better treatment than other prisoners. 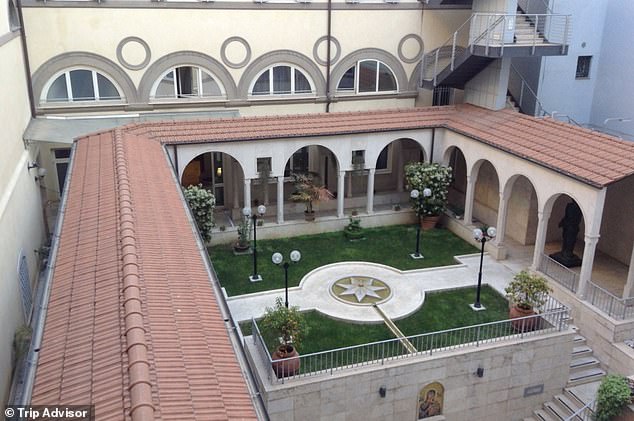 Staying at the $30 million Domus Australia guesthouse in Rome, at a cost of $5,100 along with an office, he also employed an Australian assistant for $21,000 a month 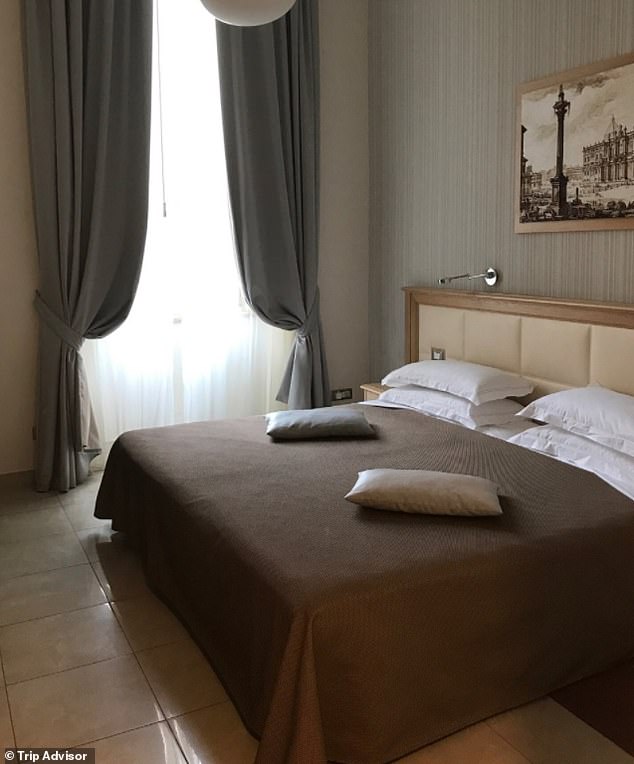 He kitted out his new digs with $87,000 worth of luxury furniture, including blowing $6,650 on kitchen sink fittings 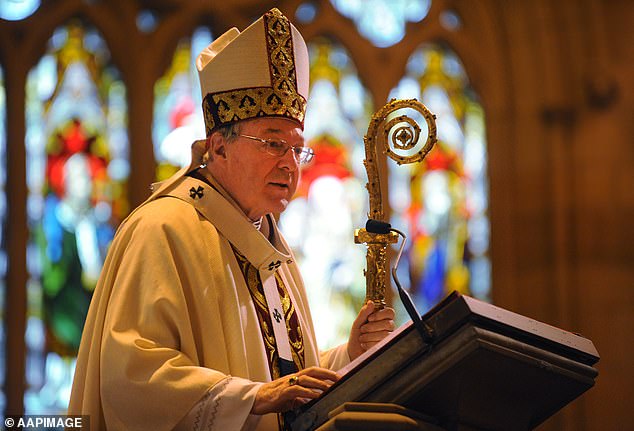 Other luxuries included $3,600 on tailored religious robes and thousands more on business class flights around the world

* Pell used the priest’s sacristy to vest and disrobe during Sunday mass because of renovations which rendered the Archbishop’s sacristy unusable. There were times Pell was left alone while still robed.

It was still possible for Pell to expose his penis to the boys while robed because of slits in the alb, an under-tunic, which were designed to access pockets.

* Neither victim reported the abuse at the time but that does not mean it didn’t happen. Mr Gibson quoted the surviving complainant who said it ‘took a courage much later in life’ to even consider speaking out.

He feared jeopardising his scholarship to the prestigious St Kevin’s College, making things difficult for his parents and struggled to understand what had happened and if it was ‘normal’.

* The prosecution timeline relied on 10 ‘independently impossible’ events involving 40 or more people occurring within the same 10-minute window in order for the events to have happened and gone unnoticed.

That includes: the two 13-year-old boys slipping away from the middle of the post-mass procession without being seen; Pell being alone and robed in the sacristy and not on the cathedral steps; and there being no other priests or altar servers moving between the sanctuary and priest’s sacristy as was their practice after mass.

* It would have been ‘inhumanly possible’ for Pell to expose his penis to the boys while wearing the Archbishop’s robes.

The ensemble was made up of the alb, an ankle-length white under-tunic which included two slits to allow access to pockets, locked into place around the waist with a knotted rope cincture.

A decorative chasuble was worn over top and, on special occasions a dalmatic as well. Pell required help robing and disrobing and Pell’s master-of-ceremonies recalled only twice in five years not assisting.

* The surviving complainant’s memories aren’t of real events, but are a far-fetched fantasy that he, now aged in his 30s, may have come to believe as the truth.

Mr Richter pointed to the fact neither victim came forward immediately, that the complainant who has since died denied being abused when asked directly by his parents, and that after the first incident involving both boys the surviving complainant did not warn his friend when he was later abused again.

Slices of life include a communal kitchen to cook their own food, along with a pool, a tennis court, a living room, and laundry.

He could also be sent to Port Phillip Prison purely because it would be easier to care for his long list of medical conditions.

Pell was found guilty by a County Court jury of one count of sexually penetrating a child and four counts of committing an act of indecency.

Those verdicts were made public only after the abandonment of a second trial over allegations Pell indecently assaulted boys in Ballarat, 110km north-west of Melbourne, in the 1970s.

Pell limped from court surrounded by a brigade of yellow-vested police officers, with a passerby screaming for him to ‘rot in hell’.

Two 13-year-old boys on scholarships to the prestigious St Kevin’s College in late 1996 and were caught swigging sacramental wine in the priest’s sacristy by Pell, newly installed as Archbishop of Melbourne. 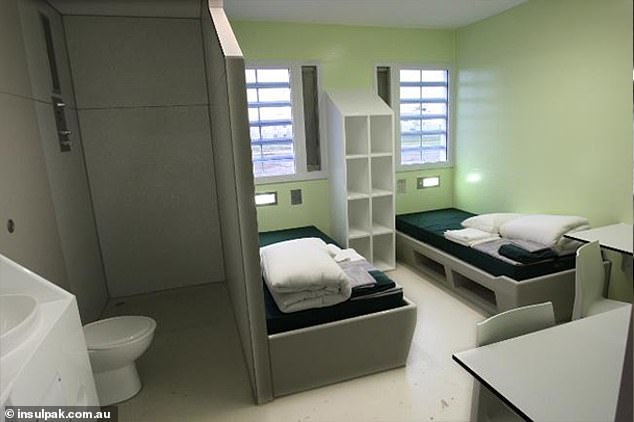 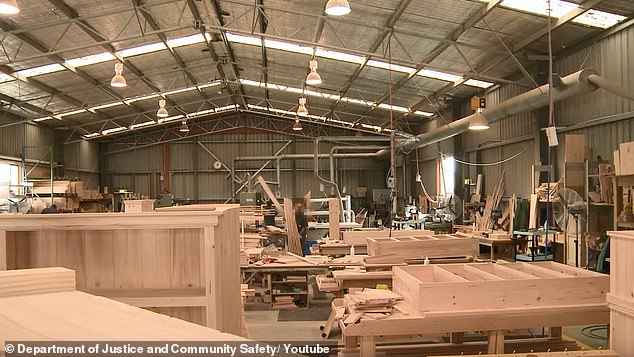 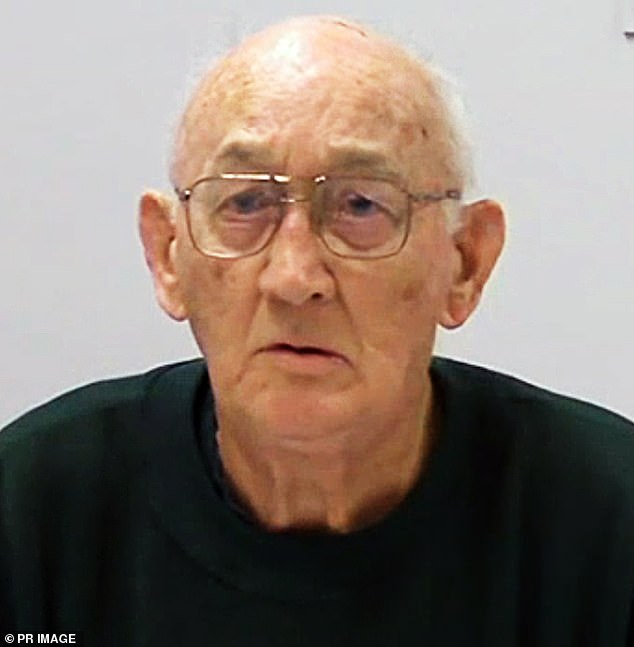 If Pell ends up in Langi Kal Kal he will be reunited with old friend and fellow paedophile priest Gerald Ridsdale (pictured), whom he was housemates with in Ballarat during the 1970s

Pell scolded the boys, then exposed his penis from beneath his ornate ceremonial robes, and molested the pair including forceing one to perform oral sex on him.

‘You’re in trouble,’ he told them before the assaults.

One of the boys said he was sexually assaulted again by Pell a month or so after he was raped, recalling that he was pushed against a cathedral wall.

‘He shoved me against the wall violently and squeezed my genitals,’ the court heard.

The cardinal’s barrister Robert Richter QC argued the allegations were a ‘far-fetched fantasy’, that Pell was always accompanied after mass and that his cumbersome robes would have prevented him revealing his genitals.

Pell has always maintained his innocence and has lodged an appeal against his convictions. 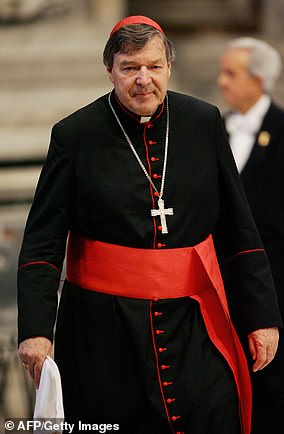 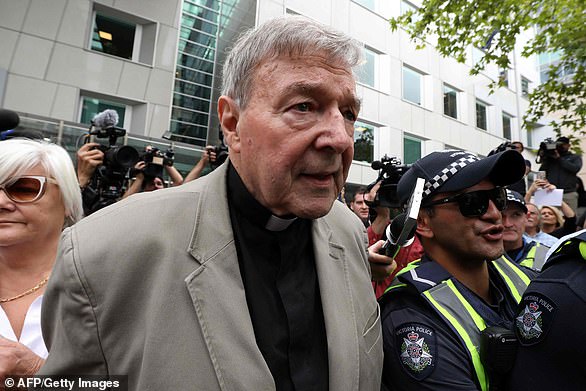