Combine a quirky-sounding title with either the word ‘club’ or ‘society’ and a cynic might suggest that these days you’re pretty guaranteed a week or two at the top of the bestsellers list.

I confess that slightly ungracious thought did occur to me as I watched The Guernsey Literary And Potato Peel Pie Society, an adaptation of the bestselling 2008 novel written by the late Mary Ann Shaffer and her niece, Annie Barrows.

There’s a clunkiness to the story, a familiarity with its component parts, that seems to be at least partially explained when you discover that it was the only novel that Shaffer – very much the driving force behind the project – ever wrote and that she was ill and over 70 by the time it was completed by Barrows. 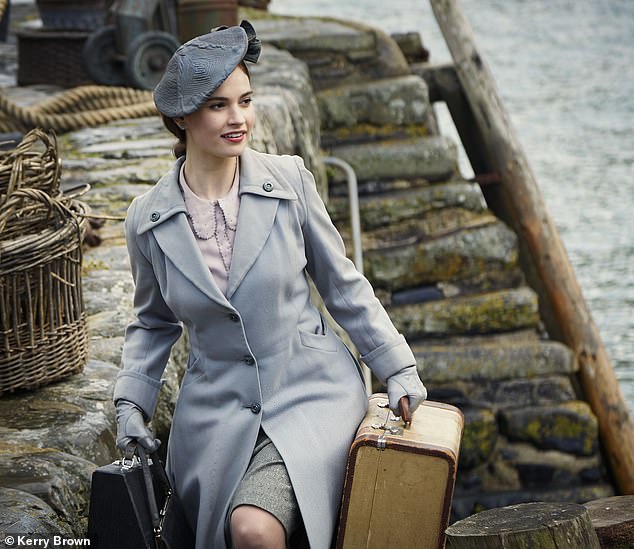 The Guernsey Literary And Potato Peel Pie Society is an unashamedly populist picture starring Lily James (above) as Juliet Ashton, a young, beautiful writer and journalist in post-war London

Nevertheless, with another veteran at the helm – 76-year-old Mike Newell of Enchanted April and Four Weddings… fame – this unashamedly populist, crowd-pleasing picture (the fact that two-thirds of the leading cast are former Downton Abbey stars says a lot) does get there in the end, despite the odd stumble along the way.

Devotees of the book will find that much has changed. Out goes the letter-writing structure that would instantly have smacked of 84 Charing Cross Road, while the three-man writing team has played fast and fairly loose with characters and plot details too.

What results doesn’t always convince and, unfortunately, covers similar ground to last year’s Another Mother’s Son, but the longer it goes on, it demonstrates an old-fashioned appeal that should please those who like to complain: ‘Why don’t they make films like that any more?’ Well, here’s one they did. 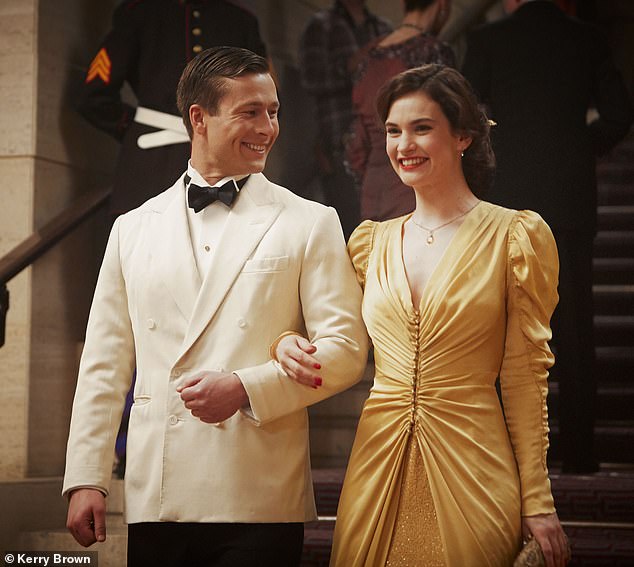 Juliet is having a high old time promoting her latest book while being thoroughly wooed by a wealthy American GI, played by Glen Powell (above)

The photogenic Lily James plays the first of several improbabilities in the film – our heroine Juliet Ashton, a young, beautiful writer and journalist who, in post-war London of 1946, is having a high old time promoting her latest smash-hit book while being thoroughly wooed by a wealthy American GI, played with just the right amount of this-surely-isn’t-going-to-end-happily by Glen Powell.

But despite pressure from her handsome publisher (James’s fellow Downton alumnus Matthew Goode), she can’t quite find the subject for her next project.

So when a letter suddenly arrives from a pig farmer in Guernsey (the second improbability is that he has come across Juliet’s address in a book that used to belong to her and is writing in the hope that she might be able to find him something similar, as you do), she’s off to the Channel Islands in not quite less time than it takes for her lovestruck beau to propose. 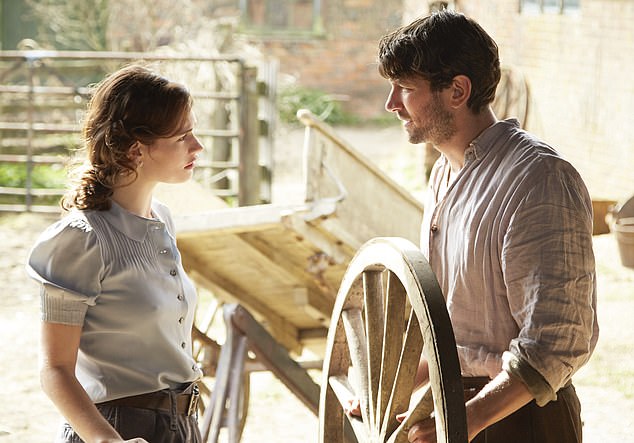 Until a letter arrives from a pig farmer in Guernsey (Michiel Huisman, above) and Juliet leaves for the island which is only beginning to recover from years of German occupation

Which is awkward because, through the magic of flashback and editing, we already know things that Juliet does not.

Such as the fact that her pig farmer – played by the Dutch actor Michiel Huisman – is tall, dark and handsome as heck and that the island, only beginning to recover from years of German occupation, is still nursing many dark secrets.

Oh, and we also know that, along with Tom Courtenay as the local postmaster, two more Downton regulars are there – the wonderful Penelope Wilton, playing an understandably mournful matriarch, and Jessica Brown Findlay, playing the headstrong Elizabeth. 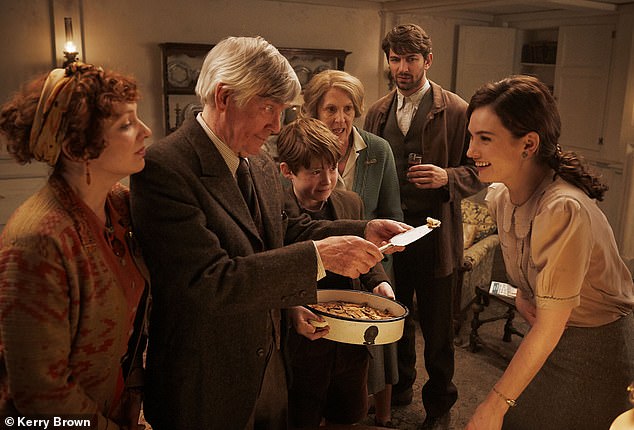 There she meets the society: (above from left) Katherine Parkinson, Tom Courtenay, Kit Connor, Penelope Wilton and Huisman and begins to unravel their story

The latter’s presence – and absence – lies at the heart of the story that Juliet slowly begins to unravel with both the help and hindrance of the members of the Guernsey Literary And Potato Peel Pie Society.

The source material, of course, was written by an American, and I suspect that what ensues will come as much less of a surprise to British audiences than it does to American ones.

Potato peel pie was a wartime recipe born out of austerity and rationing. Today it can be improved by adding salt, garlic and butter or cream.

Newell spares us detailed depictions of the many atrocities and cruelties perpetrated by the Nazis during the Occupation, but there’s no doubt the film gets better and more powerful as we move away from the whimsy of cute-sounding book-and-pie clubs and towards the dreadful horrors of war.

That said, there’s surely something unsurprising about the very darkest secret Juliet uncovers as she digs deeper into the island’s recent history.

The simple structure of the story – Juliet keeps discovering new mysteries, only for them to be immediately resolved – does become a bit repetitive, and the extensive use of Devon and Cornwall contributes to a rather disappointing sense of place.

But James does as well as she can with her rather unlikely character, the supporting cast are solid and, as I say, it does get there in the end.

Turns out they do still make them like that, after all; albeit only occasionally.

Almost half a century ago, Helen Mirren and Donald Sutherland were starring – separately and sexily – in such Seventies pictures as Don’t Look Now and O Lucky Man! Now they’ve been brought together in The Leisure Seeker, a comedy-drama that addresses the indignities and frailties of old age. And very good it is too.

Directed by Paolo Virzi, it’s the story of the long-married Spencers, who climb into their elderly motorhome – nicknamed the Leisure Seeker – and disappear on one last road trip down America’s East Coast.

Sutherland is excellent as a still charismatic academic slowly succumbing to dementia, while Mirren is lovely as the feisty but ever-present wife, now facing battles of her own. Funny and moving in equal parts. 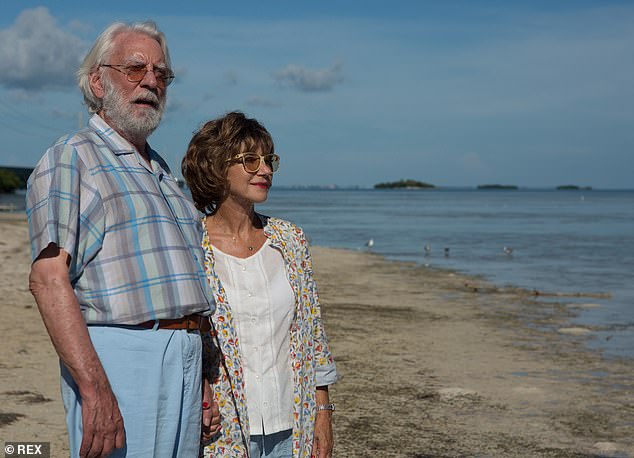 Donald Sutherland and Helen Mirren (above) have been brought together in The Leisure Seeker, a moving and funny drama that addresses the indignities and frailties of old age

A younger audience should enjoy the cleverness of Every Day, which combines elements of Groundhog Day and body-swapping pics such as 13 Going On 30, as we watch love blossom for high-school student Rhiannon (Angourie Rice) and the enigmatic ‘A’.

The only problem is that A wakes up in a different teenage body every day.

The fact that their love can overcome gender, race and sexual preference chimes with these inclusive times, but the film also happens to be very sweet.

Despite its title, Funny Cow leaves a distinctly bitter taste, with Maxine Peake playing a spirited northerner who overcomes a horrendous childhood, an awful marriage and rampant Seventies sexism to make it as a stand-up comedian.

The name Marti Caine is not mentioned, but her spirit is never far away in a film that, despite Peake’s splendidly gobby performance, delivers rather less than it should.

Let The Sunshine In is an archetypal French film almost to the point of parody.

Juliette Binoche plays a newly divorced artist in search of mid-life love, while a gaggle of French actors – Gérard Depardieu included – play the many men who don’t say what they mean, don’t mean what they say and generally forget they’re married to someone else.

Despite the gamely mini-skirted, thigh-booted Binoche, this is rather less fun than it sounds.