The healing power of gardens

The turning point in Robin Hanbury-Tenison’s six-week battle with the complications of Covid-19 was a trip to a ‘secret garden’.

He was hooked up to life-saving equipment as staff wheeled him from the intensive care unit (ICU) to an outdoor oasis of calm in the hospital, a moment Robin now credits with his recovery.

‘I was lifted from the depths of a coma by the sunshine striking my face,’ says the author and former explorer who was able to celebrate his 84th birthday earlier this month at home on Bodmin Moor.

‘I remember opening my eyes and thinking: ‘I’m back.’ ‘

Robin contracted the virus on a skiing trip, developing a dry cough days after his return. At the beginning of March, he was taken by ambulance to Derriford Hospital in Plymouth after he became feverish and struggled to breathe. He was taken straight to the ICU, where he was put on a ventilator.

Over the next six weeks, he drifted in and out of consciousness; at one point, he developed multiple organ failure as the virus ripped through his body.

He was clearly lucky to survive. But he was also fortunate that the hospital where he was treated is one of about 20 in the UK to have a dedicated ICU garden.

Derriford’s garden is a small, paved courtyard with a raised flower bed. Its close proximity to the ICU — and the staff’s belief in its restorative powers — means seriously ill patients like Robin have access to fresh air and sunshine, no matter how much life-saving equipment they require.

Until the middle of the 20th century, most hospitals were designed to incorporate ‘natural areas’ for exercise and fresh air. But with space at a premium and costs tightly controlled, gardens fell into the ‘not essential’ category, and many disappeared. However, there is now growing support to have a garden for intensive care patients.

Specialist intensive care sister Kate Tantam, who organised Robin’s garden visits, is a fierce advocate of the transformative health benefits of outdoor spaces for the seriously ill, even during the Covid-19 pandemic.

‘Intensive care is a very difficult place to be; you have little control, you’re in an unfamiliar environment and drugs can affect your level of consciousness,’ she says.

Between 60 and 80 per cent of Covid-19 patients in the ICU experience delirium triggered by the illness and the cocktail of drugs they are given, she adds. 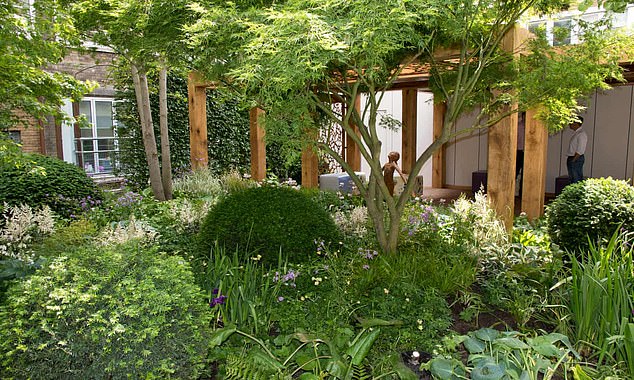 The power of ICU gardens likely lies in their ability to provide a moment of calm away from busy wards, the reassuring sight of the sky and greenery, and the feeling of fresh air on the skin. Pictured: a garden at Great Ormond Street hospital in London

‘But exposure to fresh air and sunshine, even briefly, seems to remind patients of what they are missing, and somehow reassures them that they can recover. I have seen thousands of amazing recovery cases just like Robin’s. The effect of gardens like these can be miraculous.’

While some ICU gardens boast oxygen and power supplies for the patient’s medical support machines, others are little more than an inner city ‘lightwell’, roof terrace or balcony also used by visitors and staff.

Not surprisingly, getting a sick patient off the ward and into the open-air is a complex and time-consuming process. Ten minutes outside can take up to two hours of preparation.

A Covid-19 patient might, for example, be switched to a portable ventilator and will be escorted by at least two medical staff in full personal protective equipment. If a patient responds well, as Robin did, garden visits might incorporate speech or occupational therapy.

‘We find patients respond differently when they are outside ICU, often becoming more alert, and the garden is a great place to assess recovery, such as swallowing function or manual dexterity,’ says Kate Tantam.

As the patient improves, they might be able to be reunited with a family pet in the garden, or even enjoy a beer.

‘We take the patients out as often as we practically can,’ adds Kate, ‘even every day if it is clearly making a difference to their recovery.’

The power of ICU gardens likely lies in their ability to provide a moment of calm away from busy wards, the reassuring sight of the sky and greenery, and the feeling of fresh air on the skin.

There is evidence that gardens can have measurable physiological and psychological benefits. 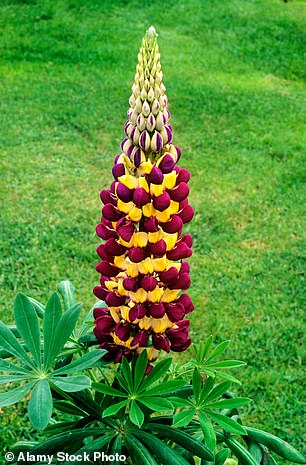 There is a growing number of hospitals raising funds for such gardens, including King’s College Hospital in London, where the plan is to convert its roof garden into an ICU-accessible space. Studies have also shown that time spent outdoors can improve recovery from conditions including stress, depression and spinal injuries.

A 2013 report by the independent think tank The King’s Fund found a strong association between access to green spaces and improved physical and mental health.

It subsequently worked with 30 hospitals and 35 hospices to design healing environments, with a strong focus on gardens.

Meanwhile, a 2012 Canadian study showed that every 10 per cent increase in exposure to green space translates into an improvement in health equivalent to being five years younger.

Nature’s ability to support the immune system appears to be key. A team from the University of East Anglia recently reviewed 140 studies into the effect on health of being outdoors. Their report, published in the journal Environmental Research in 2018, found that spending time in, or living close to, natural green spaces can reduce the risk of type 2 diabetes, heart disease and premature death, and can improve sleep.

‘The size of these benefits can be enough to have a meaningful clinical impact,’ says Andy Jones, a professor in public health, who led the research.

Gardening can take these health benefits one stage further. A study earlier this year by the University of Exeter found that gardening produced a 10 per cent increase in wellbeing. Even simply sniffing freshly dug soil could be enough.

Professor Jones says: ‘Whether the mood-lifting benefits come from being in contact with nature or being exposed to beneficial soil bacteria, being outdoors helps our immune systems work well.’

He adds: ‘We often reach for medication when we’re unwell, but exposure to health-promoting environments is increasingly recognised as being beneficial for both preventing, and helping to treat, disease.’ 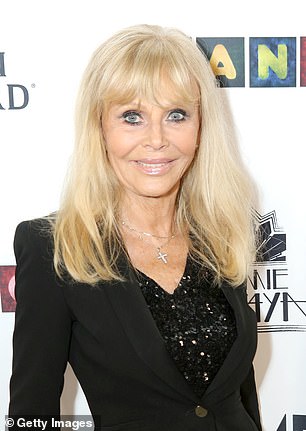 Yes, I’m very fit — I’ve done Pilates and power-walking most of my life.

Definitely. I started juicing six years ago and focus on green vegetables. I don’t eat fruit other than berries.

I’m an actress, so of course! I have lost weight recently simply from working hard — I went down to just over 7st (45kg), but am usually 8st and I am 5ft 5in.

I started smoking when I was 15 but stopped when I was pregnant with my daughter Victoria, now 55, and gave up completely seven years later when I was 29. I like to have a glass of rosé, but can go for months without drinking.

My mother died aged 52 from Alzheimer’s. My three-year-old grandson has a brain disease called adrenoleukodystrophy (ALD). I am patron of both the Alzheimer’s Society and Alex TLC, a charity supporting children with ALD.

I was a reckless skier and roller-blader, but never broke a bone. When I was presenting an award at a rock gala in 2000, I slipped and broke my ankle.

I like my B vitamins and protein powder for an extra boost.

When I was six, I had my adenoids removed after having frequent throat infections.

Would you have plastic surgery?

I did after I turned 50. It completely destroyed my looks.

How has the Covid-19 pandemic affected you?

I am self-isolating at home with my dog, Bowie. A play I was in closed down overnight.

I think I was born with depression. Luckily, I have been busy my whole life with my three children (as well as Victoria, Britt has sons TJ, 32, and Nikolaj, 46) and work. It has kept me feeling OK.

I sleep ten hours a night, under any circumstances.

No, I definitely have a ‘best before’ date.

Britt stars in The Real Marigold Hotel on Thursdays on BBC1 at 9pm.