The heartbreaking encounter behind the new movie, Wonder

Julia Roberts was so moved by the tale of a boy who hides his deformed face under a helmet that she begged to be in the film of the book. Here, its author reveals the devastating real-life encounter that inspired her… boy wonder

When Raquel Jaramillo’s youngest son encountered a little girl with a terribly deformed face outside an ice-cream parlour, he burst into tears in his pushchair. She bustled away, causing her eldest to spill the shakes he’d just been to buy and creating a scene with her frantic efforts to avoid one. As she fled, she heard the mother of the girl say sweetly to her own family: ‘OK guys, I think it’s time to go…’

Jaramillo, then working for publishers in New York, was ashamed of the way she’d handled the situation. What followed was an extraordinary public act of atonement. She wrote the children’s novel Wonder, about a ten-year-old boy with a facial deformity who is also funny, brainy, a Minecraft geek, a Star Wars obsessive and a big fan of pizza.

The children’s novel Wonder, about a ten-year-old boy with a facial deformity, has been turned into a Hollywood film

The book, which has sold eight million copies in 50 countries, has now been made into a film starring Julia Roberts and Owen Wilson.

The 54-year-old, who uses the pen name RJ Palacio, explains: ‘I was trying to spare everyone’s feelings but I guess we looked like we were running away. My heart broke for both the girl and her mother because this must happen to them a million times a day. I obsessed about the incident for hours afterwards, creating alternate realities in which I turned to the girl and started chatting to her, showing my son there was nothing to be afraid of.

‘Wonder is a makeover of the moment when I didn’t do that.’

What Jaramillo did do that night was to write the opening lines of her first novel. It’s a work of such resonance and wisdom that it has become a global teaching tool, lauded by charities and the medical profession for its barrier-breaking narrative about what it’s like to face the world without normal features.

In the book, August ‘Auggie’ Pullman’s eyes droop, his cheekbones are undefined, his outer ears are missing. His shrunken jaw means he eats like an elderly tortoise. He drools and has hearing aids. ‘I won’t describe what I look like,’ he says at the start. ‘Whatever you’re thinking, it’s probably worse.’

(Although Jaramillo doesn’t explicitly label his condition, it is usually understood to be Treacher Collins syndrome.)

Auggie has been home-schooled in the Pullman family’s cosy Brooklyn home by his mum Isabel (played by Roberts in the movie), mostly while hiding his head under a toy astronaut’s helmet. Wonder tells what happens when he starts at his local school, Beecher Prep, where he is, in the words of his father Nate (Wilson), ‘like a lamb to the slaughter’.

What follows are lessons in resilience, kindness, courage and acceptance that do not appear on any school timetable. It says much about their influence that Roberts took her family’s battered copy of the book on set and asked Jaramillo to autograph it for her own children, as did Wilson.

‘Wonder stopped me in my tracks,’ said Roberts. ‘I read it with my kids, I loved it, they loved it. I hurled myself on the mercy of the producers and said, “Please, let me be in this movie. I wanna be the mum.”’

Jaramillo, on set in Vancouver as an extra with husband Russell and their sons Caleb and Joseph, now 21 and 13, was thrilled by the A-lister’s admiration, if a bit overwhelmed. She shuns the celebrity circuit, has yet to publish another book and originally wrote under a pseudonym because she didn’t want to embarrass any colleagues in publishing.

Talking to her in London ahead of the movie’s UK opening, I find an author who’s as enthusiastic about being an ambassador for children like Auggie – and managing the global grassroots campaign for kindness and empathy inspired by Wonder – as she is writing her next novel.

It comes as no surprise to learn she lobbied hard to have a child with Treacher Collins syndrome star in the film. It was a fight she lost, with the role going to Jacob Tremblay, the award-winning child star of the Oscar-nominated Room.

Even under heavy prosthetics, the cherubic 11-year-old looks far more facially ‘normal’ than the Auggie described in the book, whose shocking appearance is the pivot for key scenes with friends and enemies. Not that Auggie himself is defeated by his problems. After 27 operations to repair and improve his face, he is asked by a classmate if he’d consider plastic surgery. ‘Dude, this is after plastic surgery,’ he deadpans. ‘It takes a lot of work to look this good.’

Jaramillo is honest about the artistic, and ultimately commercial, decision to cast Tremblay. She says: ‘The production team issued a nationwide casting call for an unknown boy with cranio-facial differences. One boy, Nathaniel, came close. The studio flew him to California for a screen test. But acting can be tough. You have to read the lines 30 times, in different ways, with 100 people watching you, opposite Julia Roberts.

‘Nathaniel had physical limitations, he was hard to understand, and if you have a $20m movie you have to make that call. The family did become consultants on the movie, though, and during filming his dad said to me, “Thank God they didn’t cast Nathaniel. It would have been too much.”

‘In the end they had to go with someone they knew could bring Auggie to life. I think they made the right decision and Jacob plays the role beautifully and with respect.’

From that dreadful day at the ice-cream parlour it took Jaramillo 18 months to write Wonder. Initially rejected, it quickly grew a huge following among teachers and librarians after its 2012 publication, and has since become a modern classic of children’s literature.

It’s crammed with scenes from the lives of Caleb and Joseph, such as a lesson in which Auggie lets his best friend copy his test answers. Isabel’s protective mothering is a straight-up copy of Jaramillo’s style. ‘I’m Latin,’ she laughs, ‘my parents were from Colombia. We like to know where our kids are and what they’re doing every single minute of the day. Helicopter-mothering? Guilty!

‘Even Auggie’s best friend’s name, Jack Will, is made up from two brothers who used to come and play at our house. Other names came straight out of my kids’ school directory. I never thought Wonder would be big. If I had, I would have disguised people a bit better!’ 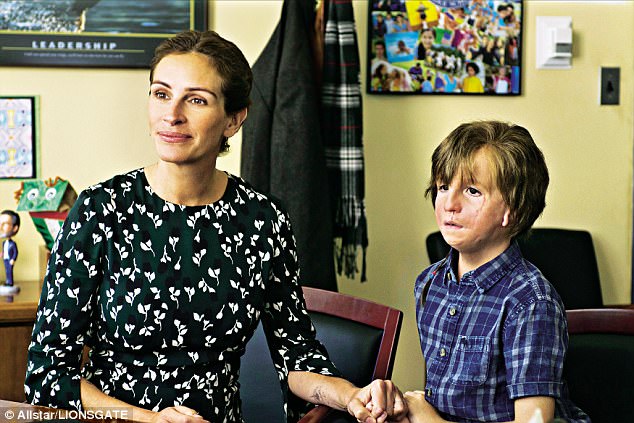 Wonder isn’t just big, it’s a phenomenon, and the new movie will amplify its message, which moved Roberts and Wilson so profoundly that they led a standing ovation for Jaramillo when filming wrapped.

Director Stephen Chbosky had secretly rewritten Wonder’s closing speech given by Mr Tushman, the principal of Beecher Prep, who is played by Mandy Patinkin (CIA chief Saul Berenson in Homeland). Jaramillo had no inkling of what was to follow.

She says: ‘I was just sitting there thinking they were re-doing the scene and then I realised the speech sounded different, that it was about me. My name was called and I went down the aisle towards Mandy Patinkin and one by one people stood up to give me a standing ovation. ‘It was an out-of-body experience, like I was floating. Auggie thinks everyone should have a standing ovation once in their life. I guess that was my Auggie moment – and it was wonderful.’

‘Wonder’ by RJ Palacio is published by Puffin at £7.99. The film is out on Friday