The hi-tech patch to check if breast op is healing

A tiny patch may improve the chances of a successful breast reconstruction following cancer surgery.

It is also hoped it could eventually be used to monitor patients having other types of surgery — or even those who aren’t undergoing surgery, but need their breathing checked, for instance.

The device, roughly the size of a mobile phone SIM card, looks like a plaster and is applied to the skin on the area of the reconstruction. It shines infrared light into the tissues — haemoglobin, the protein in blood that carries oxygen, then absorbs the light.

The more of the light that’s absorbed, the better, as it indicates a healthy flow of oxygenated blood to the tissues.

New tactic: Researchers at Imperial College London who have developed the Hamlyn bio-patch, which indicates healthy flow of oxygenated blood to post-surgical tissues

Results are sent wirelessly to a tablet or computer and can tell a surgeon if the new breast is healing well or if the tissue is in danger of dying through lack of blood.

Techniques for breast reconstruction vary, but typically involve taking tissue, skin and connecting blood vessels from elsewhere in the body and stitching them into position to form the new breast.

But there is a risk that, immediately after surgery, clots form — for example, at the point where existing and new blood vessels meet. This can obstruct blood flow and the new breast may start to die.

More than 55,000 cases of breast cancer are diagnosed in the UK each year. Up to 43 per cent of the women have a mastectomy and a third then have a reconstruction.

Cancer Research UK says in one in ten cases using the patient’s own tissue, problems develop within 48 hours. As many as five out of every 100 such procedures fail (i.e. die) and the tissue has to be removed.

The patient must fully recover from the surgery, which takes up to 12 months, before another reconstruction can be attempted.

Currently, the only way to tell if there is a problem with the blood supply is by touching and visually examining the breast to check for purple, congested or hard, or cold skin — alternatively, a handheld Doppler device can be used to detect the sound of blood pulsing through the vessels. 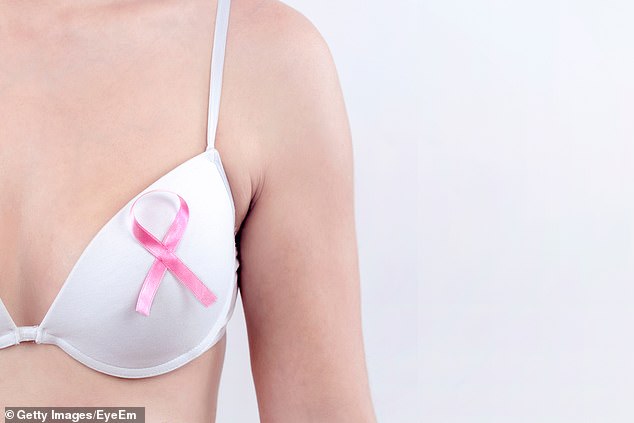 Needed: More than 55,000 cases of breast cancer are diagnosed in the UK, each year

Yet problems can still be missed. This means the time for action to tackle them (for example, to flush through clot-busting drugs or reconnect blood vessels) can soon pass and the new breast may die.

‘We know some patients who are left flat-chested have inferior quality of life, feelings of femininity and confidence,’ says Daniel Leff, a breast cancer surgeon at Imperial College Healthcare NHS Trust who has been involved in preliminary studies of the patch. ‘Repeat or revision surgeries are costly for the health service, too.’

Mr Leff says the new patch may also cut down on the number of women unnecessarily taken back to surgery, when a complication is wrongly suspected.

Researchers at Imperial College London who have developed the Hamlyn bio-patch recently ran preliminary tests on 14 patients who’d had breast reconstruction surgery following a mastectomy. They wore the patch for 48 hours after their operation — and early results showed it worked.

If larger trials are successful, the patch could be widely used for breast cancer patients within as little as two years. It could also be modified to measure vital signs, such as respiration rates in non-surgical patients — for example, those with chronic obstructive pulmonary disease.

Tena Walters, a consultant breast surgeon at The Harley Street Clinic in London, says: ‘[The patch] could have some value after reconstruction, but it really needs to be tested against the established methods.

‘There’s a chance medical staff will rely on what the patch says, rather than the current approach, and that would be a concern.’