The Ryan Reynolds-starring feature sees him returning to his role as Michael Bryce and being assigned to protect his former colleague, played by Samuel L. Jackson, as well as his ex-partner’s wife, played by Salma Hayek.

The movie serves as a sequel to the original Hitman’s Bodyguard film, which was released in 2017 and received praise for the on-screen chemistry between its stars.

The trailer begins with Reynolds’ and Jackson’s characters, Michael Bryce and Darius Kincaid, laughing as they are told by a duo of interrogators that they have to reveal everything that they know about a perilous situation.

When the latter is tased by one of the figures, the 44-year-old Deadpool star comments that his counterpart is strong enough to withstand torture, and when the weapon is turned his way, he notes that he will say anything.

The scene then changes to a therapist’s office, where Bryce is told by a professional that he has to leave his bodyguarding past behind, which he finds difficult to accomplish.

Afterward, Reynolds’ character is shown assisting Kincaid’s wife Sonia, played by the 54-year-old actress, as the two make a perilous getaway from a squad of gun-toting mercenaries chasing them through the streets of a European city. 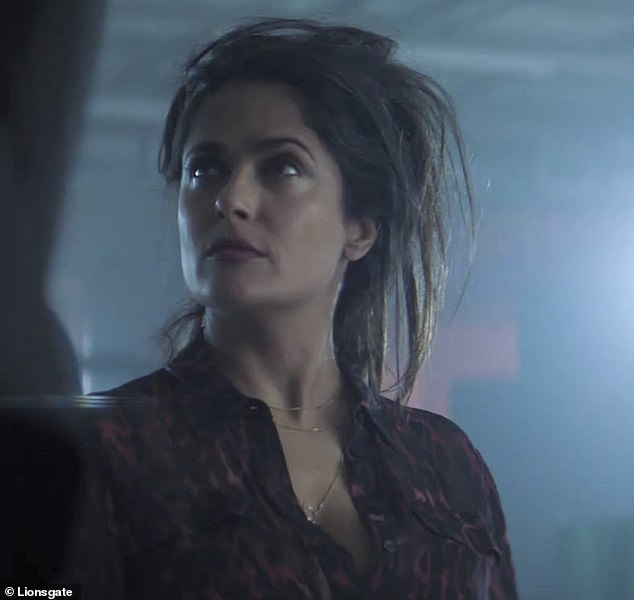 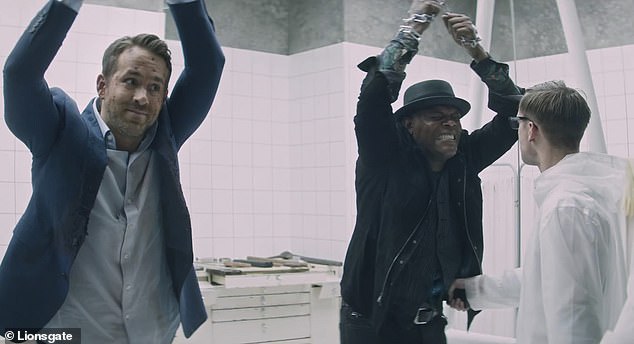 Second time around: The movie serves as a sequel to the 2017 feature The Hitman’s Bodyguard 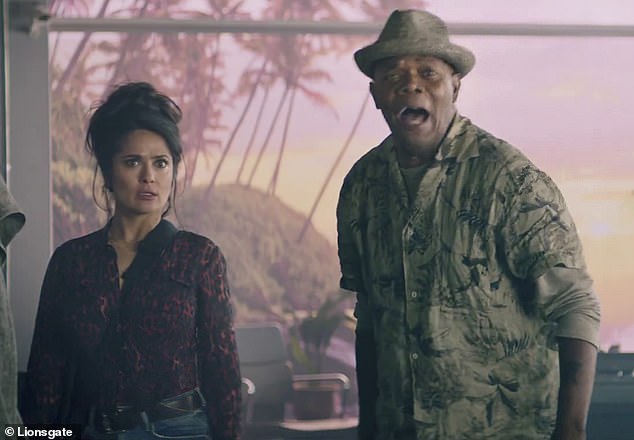 Storyline: The film is centered around Reynolds’ character, Michael Bryce, who is tasked with keeping his former colleague and his wife, Darius and Sonia Kincaid, protected while working to defeat a treacherous villain played by Antonio Banderas

She is then seen having a tense conversation with her husband, portrayed by the 72-year-old actor, who noted that he did not want Bryce anywhere near them, although Reynolds’ character appeared to be relieved to be around his old colleague.

The film’s villain, played by Antonio Banderas, steps into a clandestine facility to look upon a device that will cause a massive cyberattack across all of Europe.

When the three protagonists are debriefed on the situation and told that they need to operate at their highest levels to stop the plot, Bryce humorously comments that they are ‘definitely going to screw this up.’ 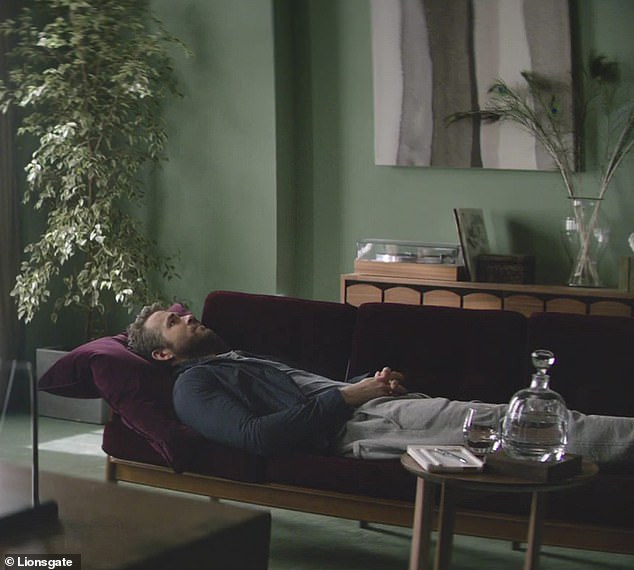 Getting over it: The trailer opens with Bryce receiving treatment from a therapist and admitting that he finds it hard to leave his profession 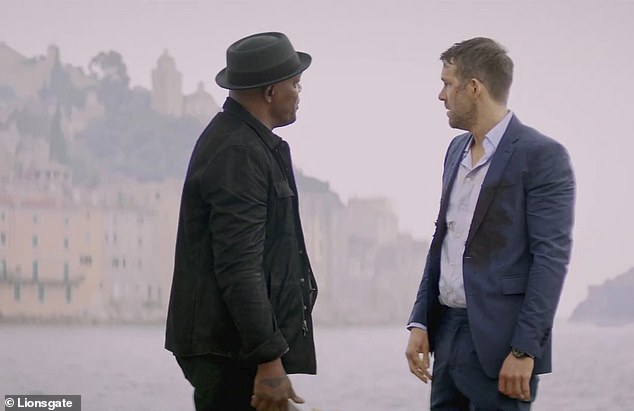 Harsh reunion: The bodyguard is then reunited with his former colleague after saving Kincaid’s wife from a group of gun-toting mercenaries 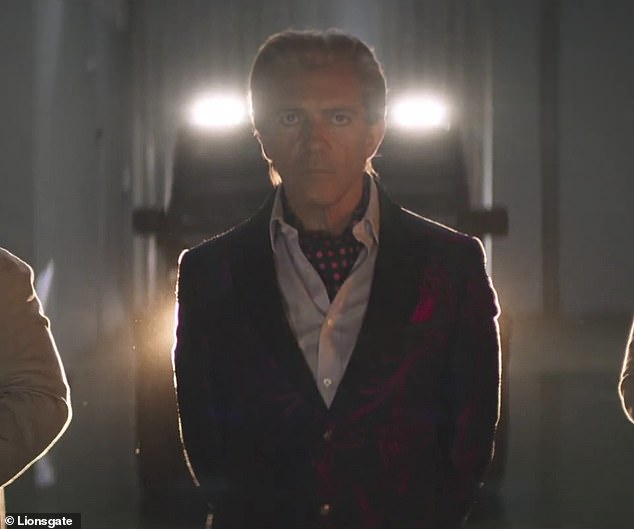 Serious business: Banderas’ character was shown gazing upon a device that will set off a cyberattack that will affect all of Europe

Although Reynolds’ character informs his counterparts that he has given up bodyguarding, they begin making out while driving and he is forced to reach from the backseat and take control of the wheel.

Sonia then tells Bryce that he has to protect the couple in order for them to welcome a child, and after a few violent scenes are shown, he comments, ‘may God have mercy on our souls.’

After the two partners load up on guns and boats, they are seen asking two Interpol officers for assistance, although every time Reynolds’ character tries to do so, he unintentionally makes a slightly sexually charged remark, much to their confusion. 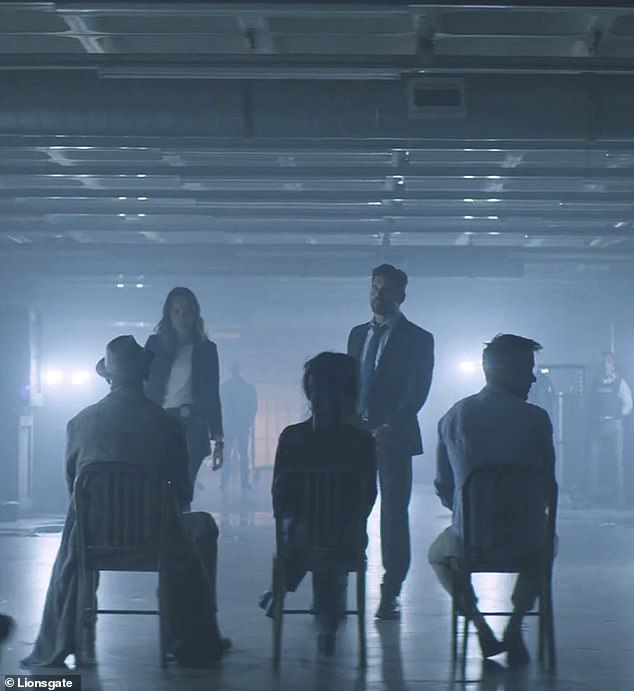 Low expectations: After being debriefed about stopping a cyberattack, Bryce humorously comments that he and his friends are ‘definitely going to screw this up’ 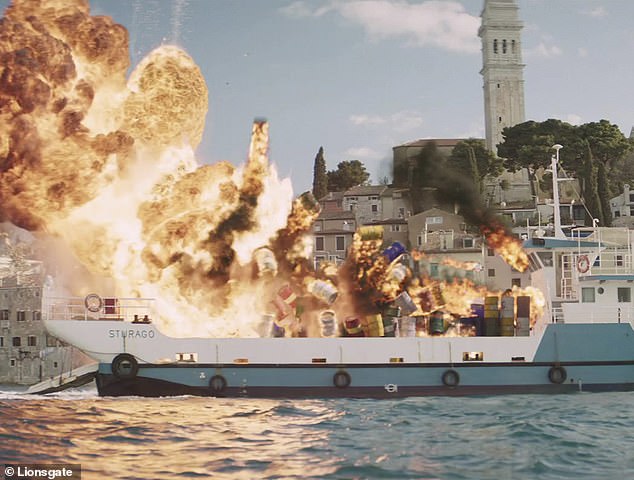 Back at it: Kincaid and Bryce are then shown returning to their old habits during a rapid-fire montage of action scenes 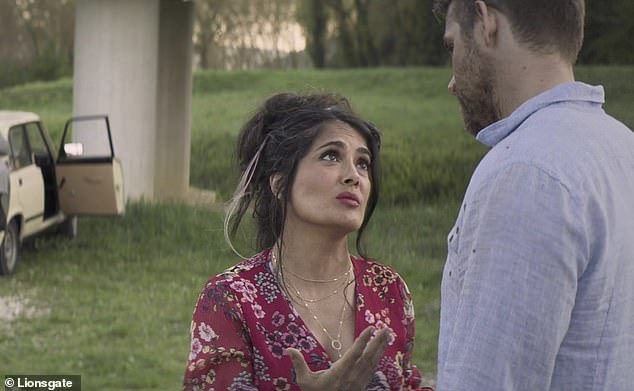 Great expectations: After Sonia informs Bryce that she and her husband are trying to welcome a baby, he comments, ‘may God have mercy on our souls’

Kincaid then tells his friend that they should go ‘do what we do and blow some things up’ before a rapid-fire montage of car chases and explosions is shown.

When the three take a break from running at a remote location, Sonia thanks Bryce for his moral support and commends his ‘powerful asexuality that makes you such a good listener.’

The trailer ends with Reynolds’ character attempting to note that the three have reached a new beginning before they are shot with poison darts and fall on each other in compromising positions. 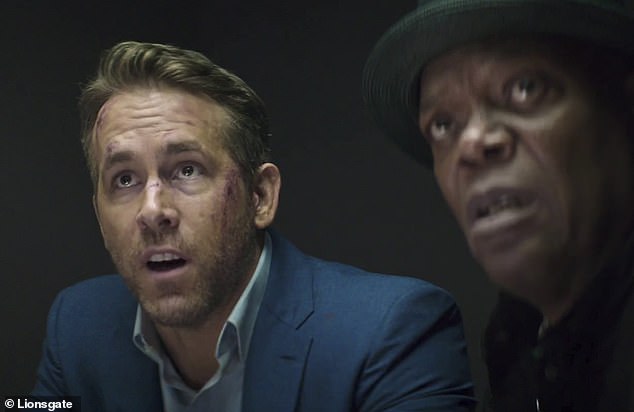 One-track mind: Kincaid and Bryce are shown having a conversation where the former advises that they go ‘do what we do and blow some things up’ 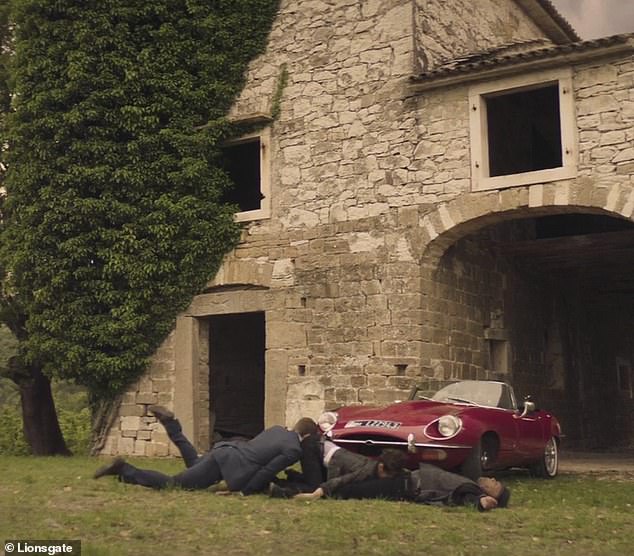 It happens: The trailer ends with the three leads being shot with poison darts and landing on each other in compromising positions.

The lead actors received much critical praise for their portrayals of the lead characters in the original 2017 film, with many reviewers pointing to their comedic timing and genuine action-star appeal.

Hayek and Banderas were previously the subject of attention for their roles in the Western action film Desperado, which was released in 1995.

The Hitman’s Bodyguard’s Wife was originally supposed to be released in August of last year before the premiere date was pushed back due to the onset of the global pandemic, and it is currently set to make its debut on June 16th. 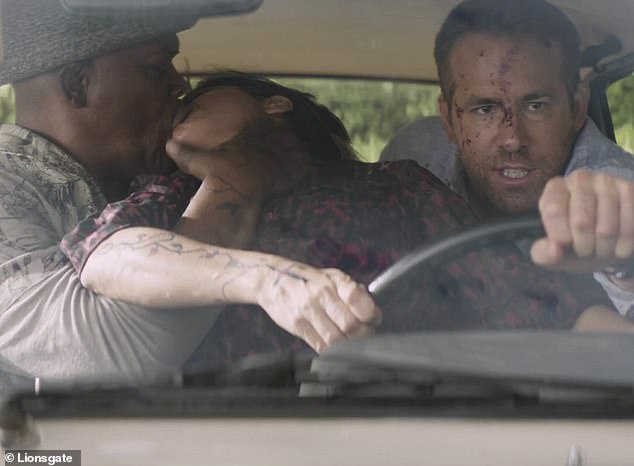 Future release: Hitman’s Wife’s Bodyguard is set to make its debut on June 16th after being delayed due to the onset of the global pandemic