The hot spa is the star in Budapest: A guide to the Hungarian capital’s amazing thermal pools

Every week our Holiday Hero Neil Simpson takes an in-depth look at a brilliant holiday topic, doing all the legwork so you don’t have to. This week: hot spas in Hungary.

Mid-winter city breaks can be chilly affairs, but it’s easy to warm up on a long weekend in Budapest as historic hot spas are among the city’s most popular attractions.

The thermal spas are fed by dozens of springs that bubble up from beneath the city streets. Many date back more than 100 years and have helped make the Hungarian capital one of the world’s most well-established wellness centres.

Soak it up: Mid-winter city breaks can be chilly affairs, but it’s easy to warm up on a long weekend in Budapest as historic hot spas are among the city’s most popular attractions. Pictured is the fairy-tale Szechenyi Thermal Baths in the heart of City Park 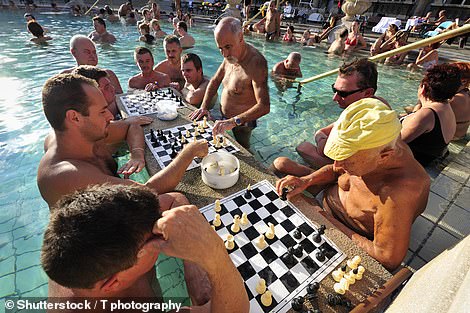 Entry tickets can be bought online or at the door, and many open until late so you can relax after a full day of sightseeing. Admission includes locker keys, and while some spas offer towel rental, you will need swimwear and often flip-flops and swim hats.

The most eye-catching and memorable of the big Budapest spas is Szechenyi Thermal Baths in the heart of City Park.

First opened in 1914, Szechenyi’s grand, golden-hued, neo-baroque buildings look like a royal palace or a scene from a fairy tale.

Deep within the complex are more than a dozen pools, saunas, steam rooms and treatment areas. But the showstoppers are the three huge outdoor pools. Steam rises from the water all winter and fans say it’s particularly magical in snow or rain. Don’t be surprised to see one of Budapest’s most iconic images: locals playing chess on waterproof boards while taking a long, hot soak in the open air.

Or try one of the events that bring the baths right up to date: spa parties (dubbed SPArties) with DJs, light shows and dance music till the early hours. The next big one is on New Year’s Eve, and tickets cost from about £60.

Standard entrance during the day is from about £16, or you can buy cheaper tickets from 5pm till closing time, normally 7pm to 8pm. 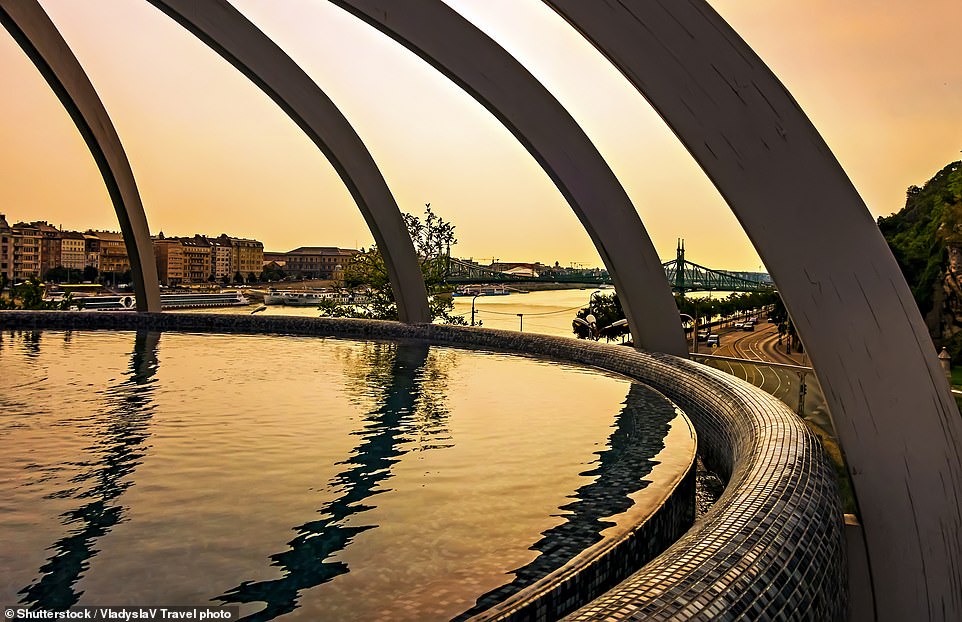 Rudas spa, Budapest’s second most famous thermal bath, has recently opened a rooftop pool with views of the River Danube and the city’s skyline (pictured) 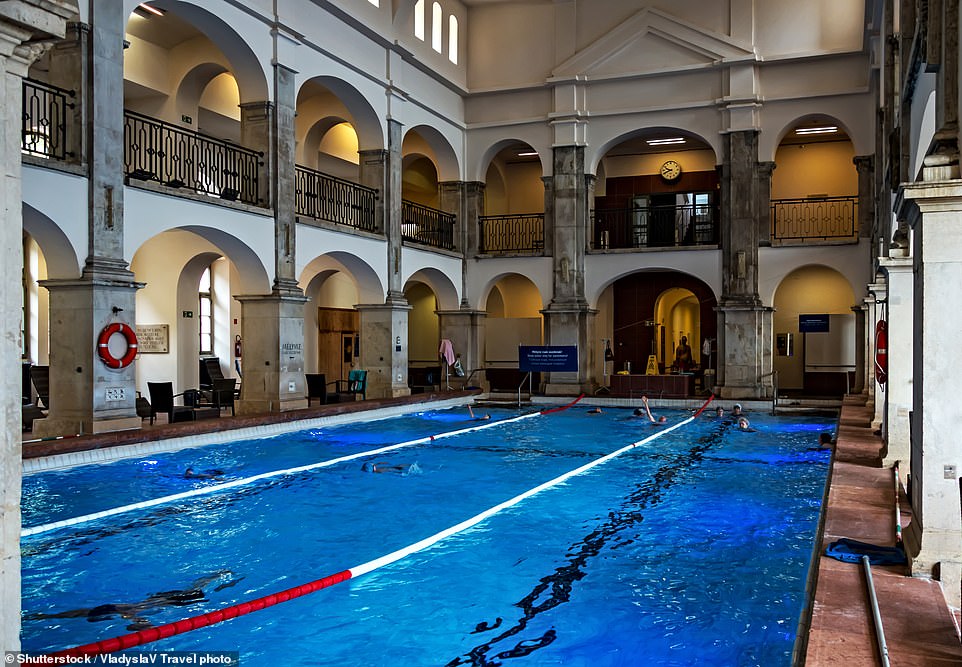 Above is the indoor swimming pool at Rudas Spa. Entrance costs from £14

The second of the city’s famous bath complexes is the riverside Rudas spa, where a 32ft-wide dome looms over the octagonal main pool.

This historic complex has a Turkish bath modelled on those of the Ottoman era and recently opened a rooftop pool with views of the River Danube and the city’s skyline.

While Rudas has always been popular with tourists, it’s also a new favourite among more discerning locals. Entrance costs from £14. 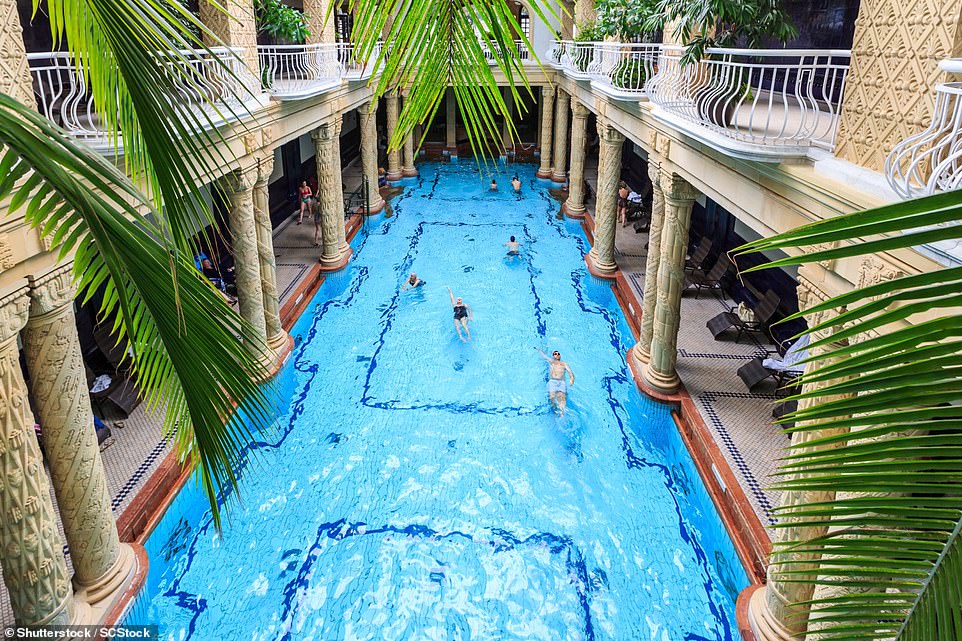 Gellert Baths, which date back to 1918, has a mineral-rich indoor pool surrounded by lines of stone columns (pictured) 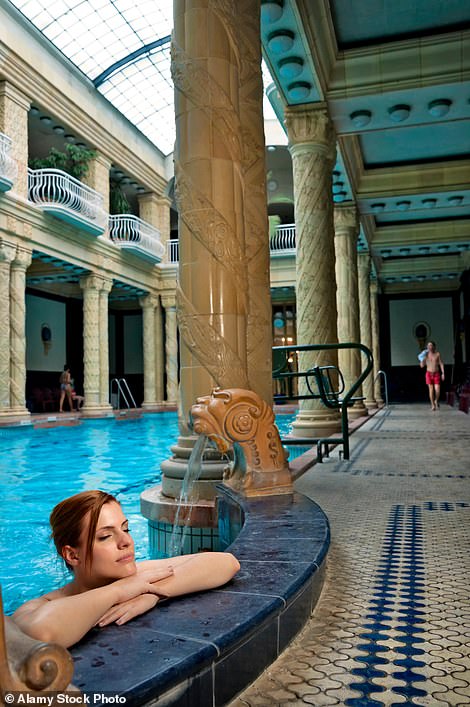 If you’re visiting Budapest soon, another must-see spa is Gellert Baths, a green- and blue-hued Art Nouveau treasure dating back to 1918 which is shortly set to close for renovation work.

Get to the historic complex while it’s still open (closure dates are not yet confirmed) to relax in facilities including a mineral-rich indoor pool surrounded by lines of tall, carved stone columns. Entrance costs from £25.

Budapest also has a host of smaller, sometimes more modern thermal baths, though there are fears that opening hours at some may be cut this winter as heating costs rise. Recommended spas include the Dandar, Dagaly and the Veli Bej Bath.

Getting to Budapest is easier than many expect.

Direct flights with Wizz Air, easyJet, Ryanair, Jet2 and British Airways take 90 minutes from airports around the UK. Fares this winter start at about £66 return.

Packages include Jet2 flights from Birmingham plus three nights at the Continental Hotel, with a rooftop pool, from £216pp in January (jet2holidays.com).

Or you can get BA flights from Heathrow plus three nights at the Boutique Hotel Budapest – near the Danube and Gellert Spa – from £208pp (ba.com).

For more details on Budapest’s spas and the city’s other attractions, go to visithungary.com.