The hottest UK hotel openings for 2022, from London to Edinburgh

The staycation trend is here to stay, it seems, with hoteliers around the country investing heavily in some amazing new locations. As many prepare to welcome their first guests in 2022, we reveal those which are really worth checking in to.

The New Year will get off to a very luxurious start when Fairmont Windsor Park opens on January 1.

It’s a sister hotel to the Savoy, and your approach along its tree-lined driveway in a prime position on the edge of the Royal estate maintains that reputation for excellence with a stunning first impression.

Fairmont Windsor Park, a sister hotel to the Savoy, opens on January 1. Pictured is the imposing entrance 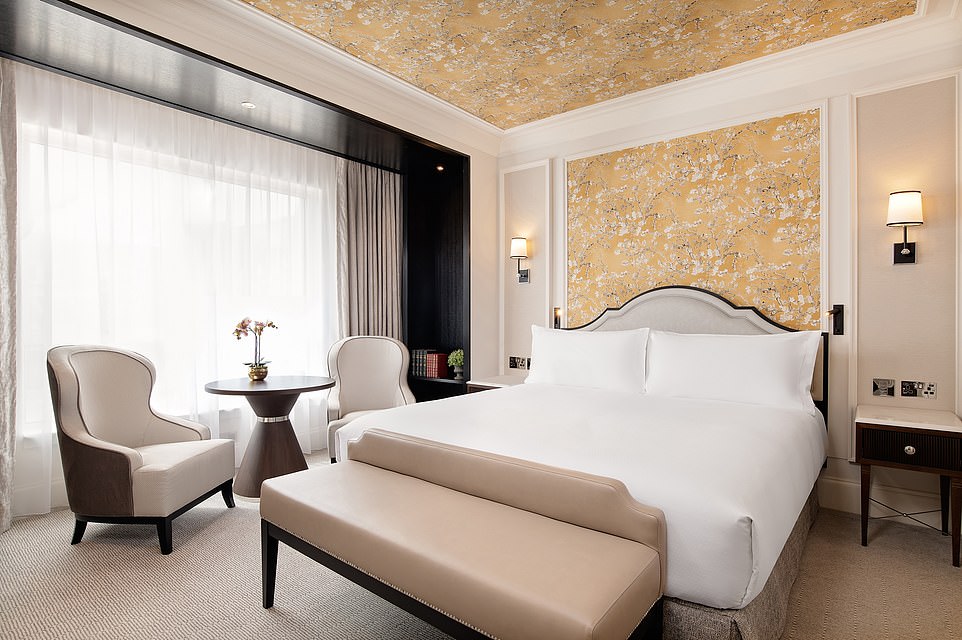 With 200 rooms and huge suites overlooking the 40-acre grounds, the facilities match the magnificent location.

Its wellness area really stands out – it is spread over 2,500 square metres and packed with high-tech treatments as well as indoor and outdoor pools and gyms, plus a hammam and Japanese-style foot spa.

There is also very fine dining at the British-centric 1215 restaurant and a bar that uses herbs grown by the hotel.

B&B doubles from £420 per night (fairmont-windsorpark.com).

Legendary hotelier Grace Leo, who transformed Cotton House in Mustique and some of Paris’s chicest boutique hotels, has turned her attention to the Sussex coast.

Work has already started to turn the 1920s Cooden Beach Hotel in East Sussex into a Hamptonesque coastal bolthole, right on the pebble beach and just two minutes from Bexhill station.

Expect 45 breezily beautiful bedrooms by spring, alongside a vast open-plan lounge and bar plus seafood restaurant in moody shades of blue, with strong accents of relaxation. B&B doubles from £265 per night (thecoodenbeachhotel.co.uk).

Just along the coast in Brighton, the London-based private members’ club Soho House is to open its long-awaited seafront hotel on the listed site of the former Sea Life Centre. Rooms will be available to non-members, along with a plunge pool and a fish restaurant. Room rates have not yet been set (sohohouse.com).

The Fforest group offers luxury outdoor experiences at its sites in mid Wales, with cabins, bell tents, domes and a Georgian farmhouse, but is now preparing to open its 23-room hotel, The Albion.

It will be housed in a pair of imposing warehouses on the harbourside at Cardigan near wide, beautiful Poppit Sands. The owners have preserved as much as possible of the buildings’ history, even including 19th Century graffiti on the limewashed walls, and fitted it out with locally made furniture and textiles.

Inland, the arrestingly named Vices will open in York on January 19. Once a stern Victorian police station, there will be just three suites plus a restaurant, Allium, that seats guests only and has squirrel on its opening menu.

Also in York, No 1 is a calmer reinvention of a landmark Georgian building in Clifton, opening on January 1 with 39 bedrooms with four-posters and record turntables, a bar whipping up cocktails, a restaurant, help-yourself pantries in the corridors and a spa in the cellar. Dog and family-friendly.

B&B doubles from £154 per night (guesthousehotels.co.uk). 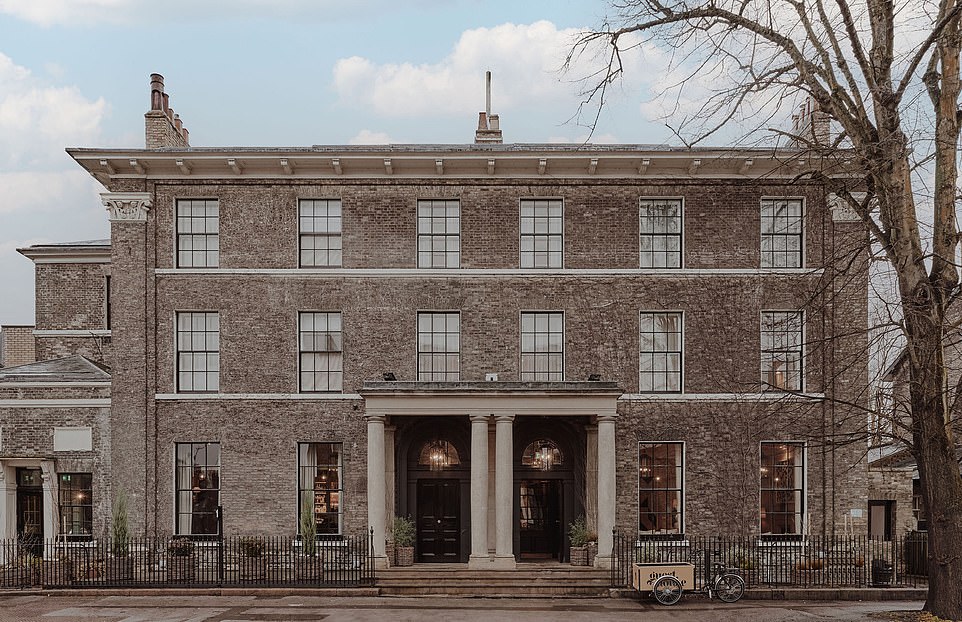 No 1 in York is a reinvention of a landmark Georgian building in Clifton, which launches on January 1 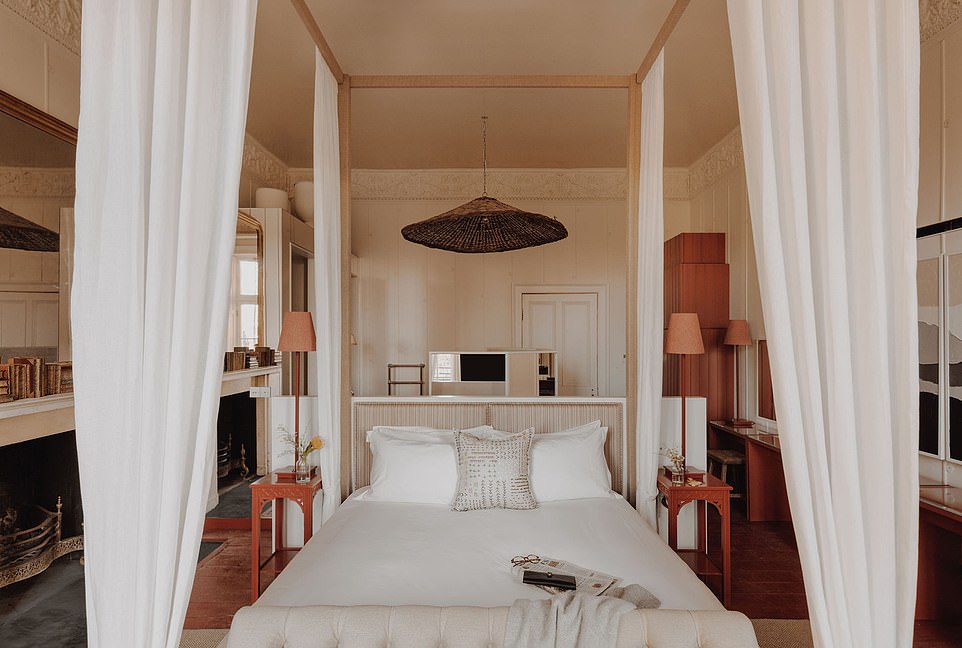 Slick: Each of the 39 rooms at No 1 have luxurious four-poster beds and record turntables

Like York, Chester has history in spades, from the remains of a Roman garrison to the Rows – shopping arcades that date from medieval times and contain some of the city’s nicest shops.

Wilde’s opens a stone’s-throw away on Bridge Street in summer, with 18 rooms, mullioned windows and claw-foot baths plus a very modish rooftop pool and restaurant. Double rooms from £250 per night (wildeschester.com).

In March, the Clayton Hotel will bring style and a serious increase in room numbers to Bristol. Once a landmark printworks on Broad Street, its entrance is covered in Art Nouveau tiles that will lead the way to 255 bedrooms, bars and a restaurant.

B&B doubles from £162 per night (claytonhotelbristolcity.com). 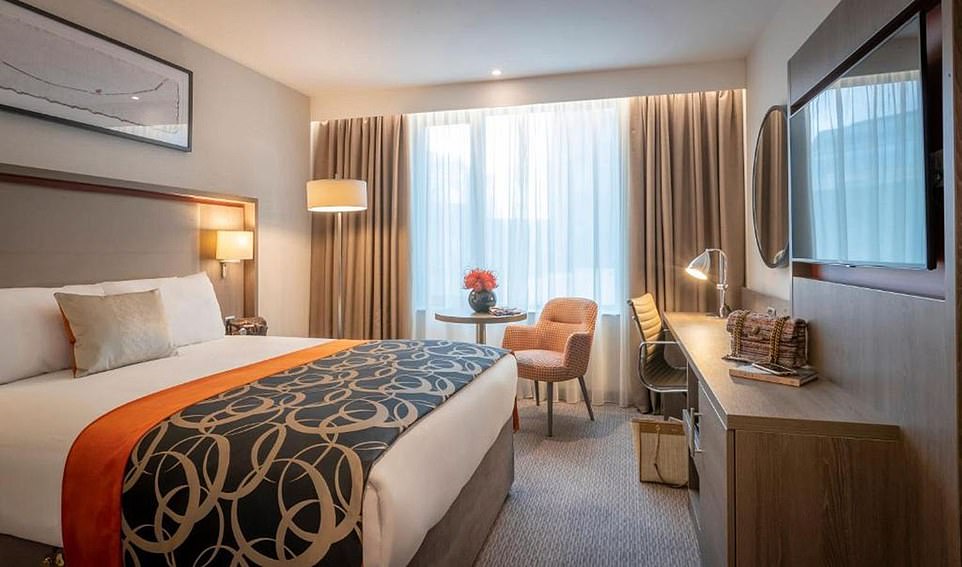 Clayton Hotel, due to open in March, is a new addition to Bristol’s hotel scene. Pictured is one of the stylish rooms

In Manchester, Leven has just opened in trendy Chorlton. Once a cotton warehouse, with later turns as a brewery and a comedy club, now there are 42 rooms with exposed brick, high thread counts for the linen and its own blend of coffee. A restaurant is due to follow in the New Year. Double rooms from £89 per night (liveleven.com).

Boys Hall in Kent is due to open in June, run by a former City of London restaurateur. This bucolic 17th Century house will feature ten bedrooms, a kitchen garden and a 70-cover restaurant. B&B doubles from £160 per night (boys-hall.com).

In Somerset, Holm in the village of South Petherton has spent the past year establishing itself as an acclaimed contemporary restaurant, and 2022 will see rooms added. Rates yet to be set (holmsomerset.co.uk). 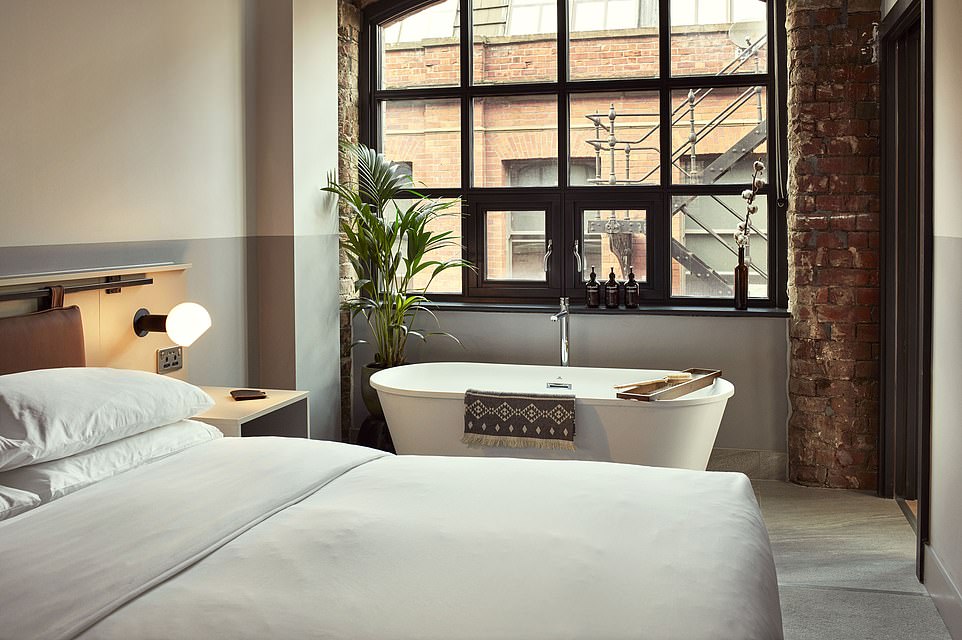 Looking for somewhere cool to stay in Manchester? Leven in trendy Chorlton has 42 rooms with exposed brick walls

In the Peak District village of Hope, the second Bike & Boot is due to open in summer, geared towards active types who want a hotel with style, polish and free afternoon cakes. As with the Scarborough original, there’s secure parking for bikes, bike hire and a grooming area for dogs.

Nearby walks include Mam Tor and Jacob’s Ladder, as well as beauty spots such as Ladybower Reservoir.

Double rooms from £100 per night (bikeandboot.com).

For those wanting something a bit more rest-orientated, the Retreat Elcot Park in Berkshire will open in spring, as a sister hotel to the Mitre at Hampton Court. 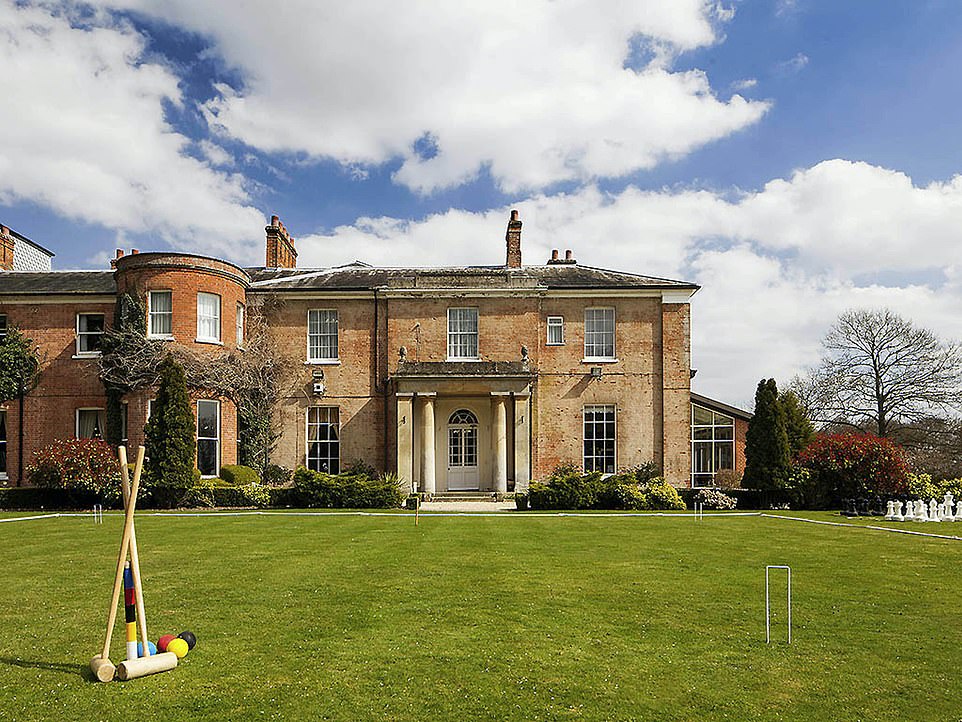 Relax: The Retreat at Elcot Park will be based in a historic building in Berkshire. It’s ideal for those seeking a ‘rest-orientated’ getaway

Interior designer Nicola Harding has overseen the decor of this hotel too, respecting its 19th Century grace but adding some very nice 21st Century touches, including an infinity swimming pool, cabanas and a Whispering Angel bar. B&B doubles from £210 per night (elcotpark.com).

In the most desirable honeystoned part of the Cotswolds, The Fox at Oddington will open in May, with six bedrooms tucked into this venerable 16th Century pub, designed by Carole Bamford, and food from Daylesford, her organic farm. Room rates yet to be set (thefoxatoddington.com).

Outside Cirencester at Ampney Crucis, Wild Thyme & Honey is larger but has the same Cotswolds village charm, freestanding baths in some of the 24 bedrooms and a courtyard restaurant. B&B doubles from £150 per night (wildthymeandhoney.co.uk).

The biggest concentration of new hotels will be in London, though. Whether you want luxury, budget or inbetween, there’s an opening in the capital for you.

The Old War Office in Whitehall will be reborn as a Raffles hotel. This Edwardian building, with views on to Horse Guards Parade and St James’s Park, was once the workplace of Ian Fleming and has been a location for a number of James Bond films, including the latest, No Time To Die.

Raffles is debuting a new hotel in the iconic Old War Office in Whitehall, which featured in the most recent James Bond film 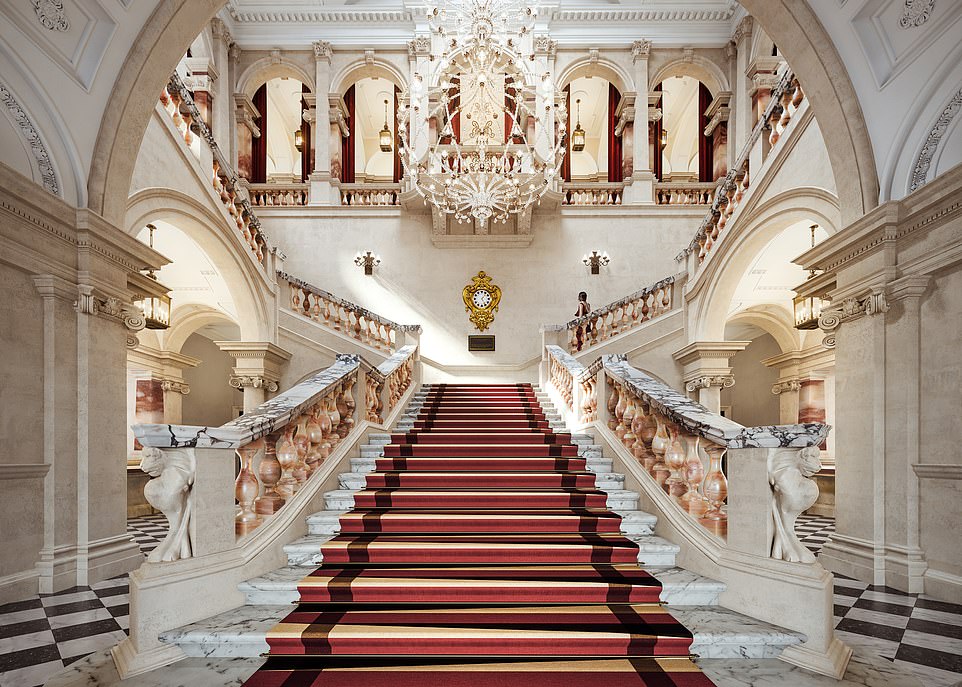 The Raffles hotel will have 120 rooms and multiple restaurants and bars, including a rooftop one. Pictured is the grand entrance hall

General manager Philippe Leboeuf has poached a super-league of staff from London’s very top hotels and restaurants to look after 120 rooms and multiple restaurants and bars, including a rooftop one. Room rates are yet to be set (theowo.london).

Meanwhile, 1 Hotel London will bring some sustainably minded panache and 120 rooms to a prime position overlooking the Ritz on Piccadilly, for quiet, very considered luxury. Room rates are yet to be set (1hotels.com/sprouting-soon).

The Broadwick Soho Hotel will offer maximalist charm and boudoir bars when it opens in spring, with Sicilian food, live music and a love of the urbane. B&B doubles from £275 per night (broadwicksoho.com). 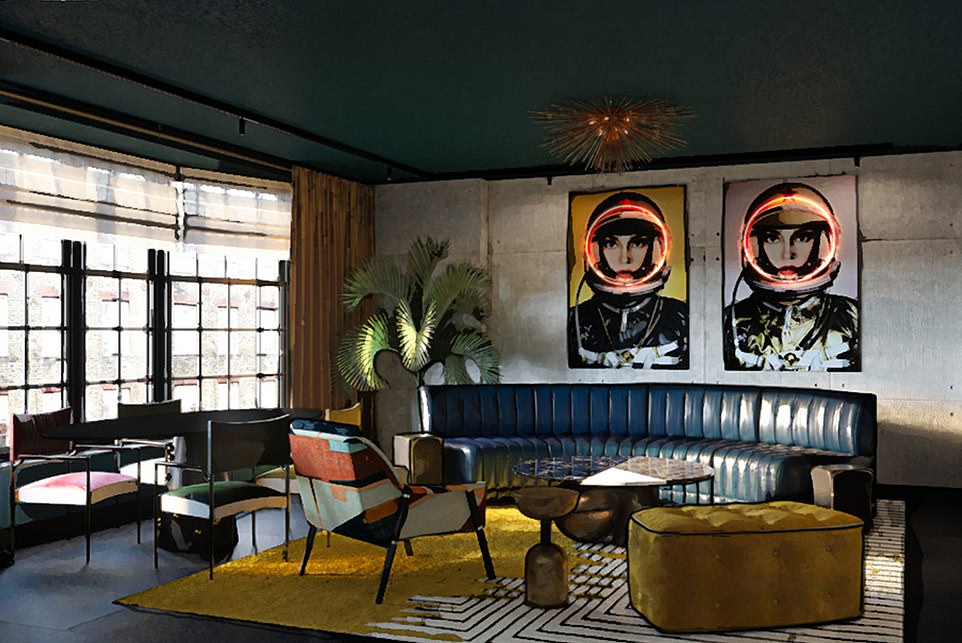 Chateau Denmark is coming to London’s Denmark Street – a site famous for its rock and roll history. The above rendering shows how the hotel might look

Nearby Chateau Denmark is situated on London’s Tin Pan Alley (aka Denmark Street) with 55 rooms in what were once the recording studios where David Bowie, Elton John and Jimi Hendrix hung out. There will be live music, too.

Room rates are yet to be set (chateaudenmark.com).

Rather gentler, Bellevue in Bayswater will bring some Franco-Italian flair behind a stucco facade in Norfolk Square. Room rates are yet to be set (bellevuehotel.co.uk). 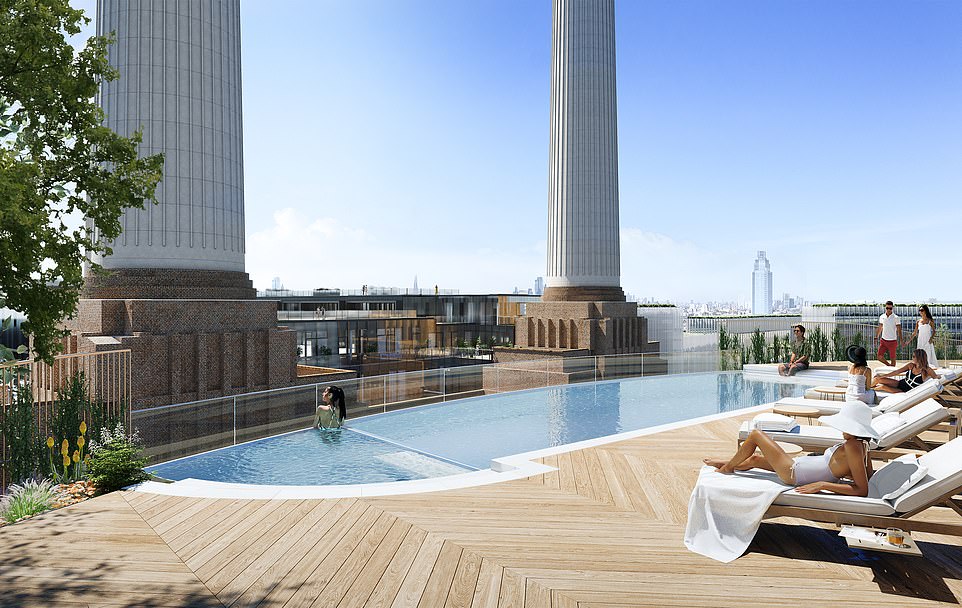 The high life: The above rendering shows the rooftop pool being planned for Art’otel in Battersea, London

Pink Floyd fans will want to head to Art’otel, a sister to the Amsterdam original. Within Battersea Power Station, famed for the cover art on the band’s Animals album, there will be 164 rooms and another rooftop pool (London’s new hotels are really banking on summer heatwaves).

Room rates are yet to be set (artotellondonbattersea.com).

Even though the landmark steel swirl that is the W in Edinburgh has been delayed until 2023, there’s plenty to keep visitors happy.

100 Princes Street opens in June in the grand former clubhouse of the Royal Overseas League. It will have 30 rooms and a top-floor Explorers Club where single malts and world wines will set off views across to the castle. Double rooms from £295 per night (100princes-street.com).

In March, Gleneagles, Scotland’s most famous country hotel, opens Townhouse with 33 bedrooms and a members’ club in the former headquarters of the Bank of Scotland on St Andrew Square. The bank’s vault has become a gym, with cutting-edge treatments to help guests work off the food grown on the Gleneagles estate.

Room rates are yet to be set (gleneagles.com/townhouse). 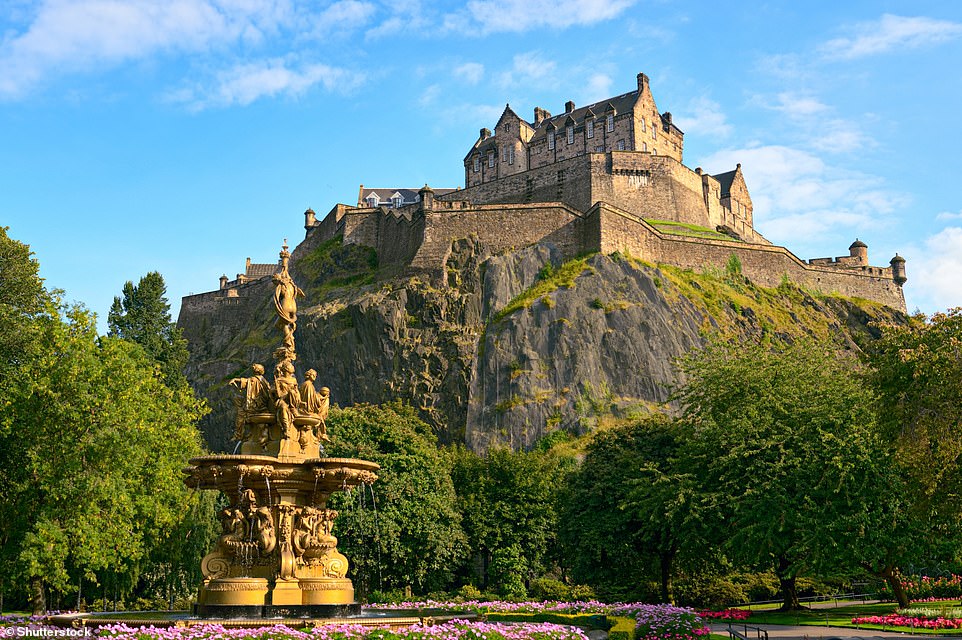 The view of Edinburgh Castle from the Princes Street gardens. When it opens next summer, guests at 100 Princes Street will enjoy views of the hilltop fortress from the top-floor Explorers Club 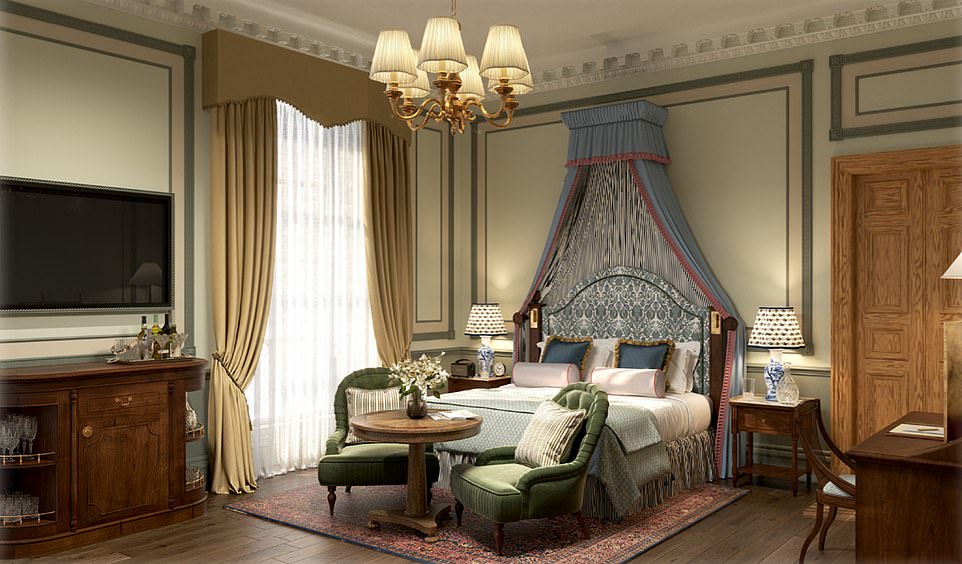 Gleneagles Townhouse will be housed in the former headquarters of the Bank of Scotland in Edinburgh. Pictured is a rendering of one of the opulent rooms

You’ll have to wait until autumn for the House Of Gods in Glasgow, but when it arrives it’ll be with panache, with buttons in rooms to order champagne and a secret bar. B&B doubles from £136 per night (houseofgodshotel.com).

Both Edinburgh and Glasgow will also get a Virgin Hotel each. In recent years the company has produced a series of award-winning hotels across the US, but these are its first on this side of the Atlantic.

Glasgow’s will be on the River Clyde, sharp and modern with a laptop-friendly cafe amid its bars, restaurants and 242 rooms. Edinburgh’s hotel will be housed in a 19th Century Old Town building. Doubles from £400 per night (virginhotels.com). 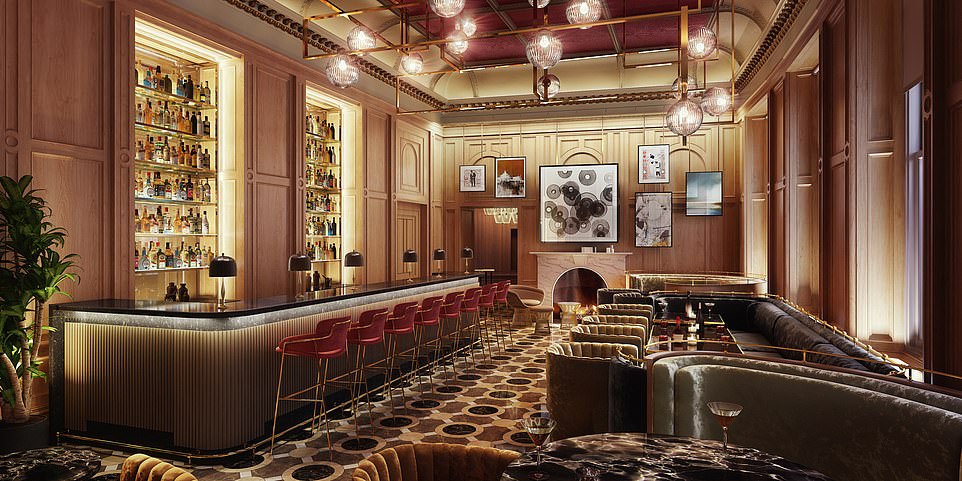 Virgin Hotels is planning to open two properties in Scotland next year. Pictured is a rendering of the bar in the Edinburgh outpost 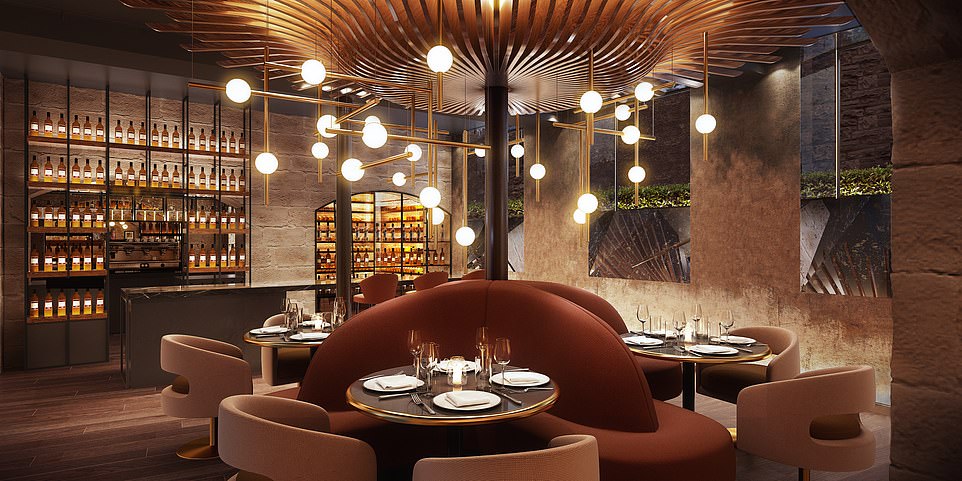 Doubles at the Edinburgh Virgin Hotel, pictured, will cost from £400 per night