Australia’s idyllic Sunshine State is haunted by a series of shocking domestic violence cases of women who have been brutally butchered by their lovers.

When Rowan Baxter, a deranged and controlling man who stalked and abused his ex wife, ambushed Hannah and three children in Brisbane during the school run on February 19, 2020, the nation watched the aftermath.

Cowardly Baxter doused the vehicle in petrol and watched his family scream in agony as they burned to death, then killed himself while trying to stop onlookers from saving Hannah, 31, Aaliyah, 6, Laianah, 4, and Trey, 3.

Their deaths were labelled a harrowing case of domestic violence, but Queensland – known for its breathtaking islands and white sand beaches – has suffered a sinister spate of family murders. 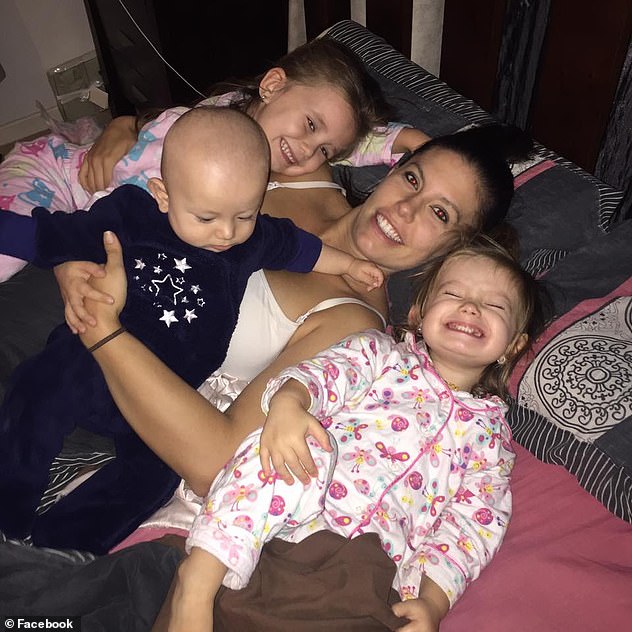 Hannah Clarke (pictured with children Trey, Aaliyah and Laianah) was murdered by her estranged husband Rowan Baxter, who posted slurs about her on social media

The 34-year-old mother disappeared from their Gold Coast mansion amid a bitter divorce row over custody of their two children in February 2013.

Chardon was sentenced to 15 years behind bars for manslaughter in 2019, but died in jail just 12 months into his sentence in October at the age of 73.

Following sentencing, it was revealed that Chardon allegedly confided in convicted conman Peter Foster while they shared a jail cell four years ago.

During walks around the prison yard, Chardon allegedly claimed to Foster that Gerard Baden-Clay ‘made a mistake by trying to cover up his affairs’, according to documents obtained by The Courier Mail.

Chardon reportedly compared his case to the one of Baden-Clay, who was convicted of the murder of his wife Allison in 2012 and was allegedly confident he hadn’t made the same mistakes.

He also allegedly boasted to Foster that there was no forensic evidence that could link him to his wife Novy’s death. 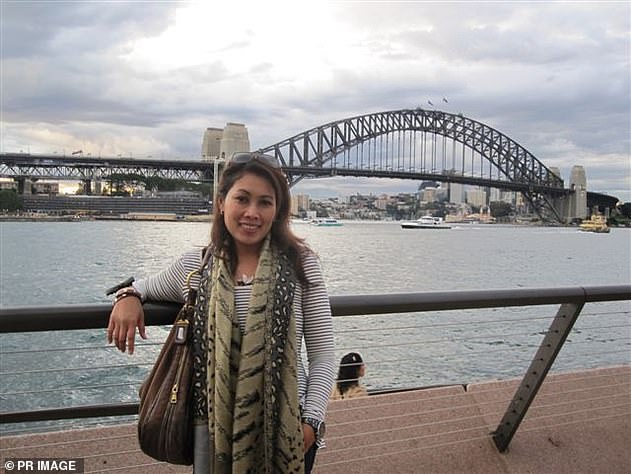 The millionaire’s wife Novy Chardon (pictured), 34, disappeared from the pair’s Gold Coast mansion in 2013 amid a bitter divorce row over the custody of their two children. Her body has never been found 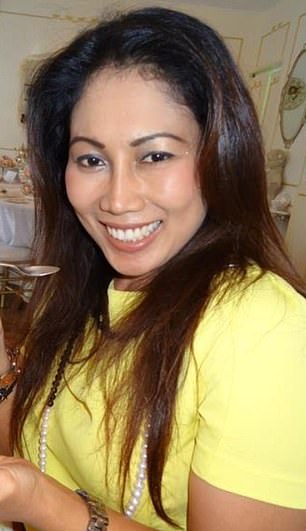 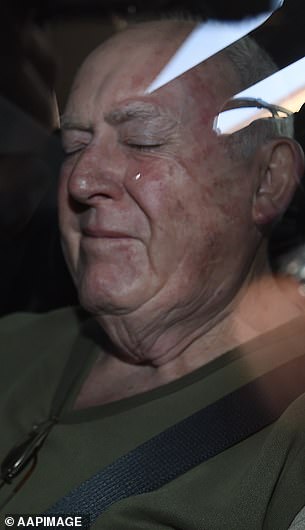 Chardon (right) was convicted of his wife Novy’s (left) manslaughter following a three-week trial in the Brisbane Supreme Court on September 9, 2019. He was sentenced to to 15 years in prison, with parole eligibility in 2031

Brock Wall is serving two life sentences after viciously murdering his former partner  Fabiana Palhares, who was pregnant with their child, at her Varsity Lakes home on the Gold Coast in February 2015.

The now-40-year-old drove to her house and jumped on her pregnant belly so hard the soles of his shoes were later identified as bruises on her skin.

He then bashed the Brazilian woman to death using the blunt side of the hand axe as she screamed for help down during a triple-0 call.

Even though her gruesome death happened six years ago, it was only this year that a non-inquest was released by Deputy State Coroner Jane Bentley. 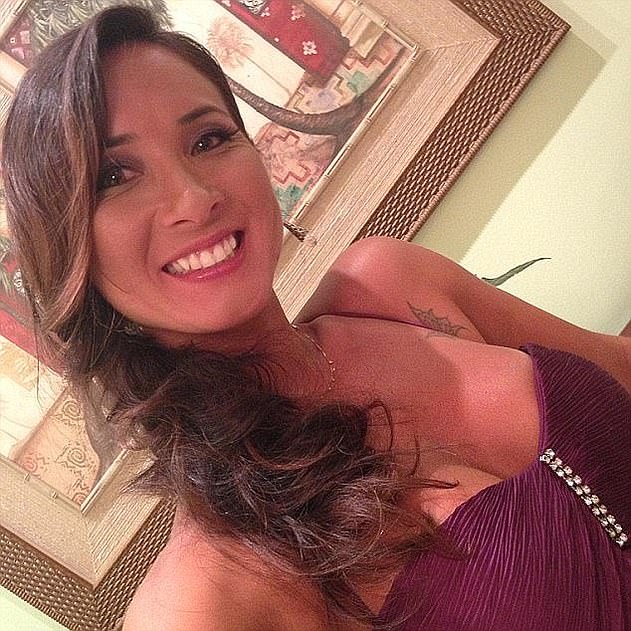 Brock Wall attacked his pregnant 34-year-old partner Fabiana Palhares (pictured) with an axe in February 2015, bludgeoning her to death 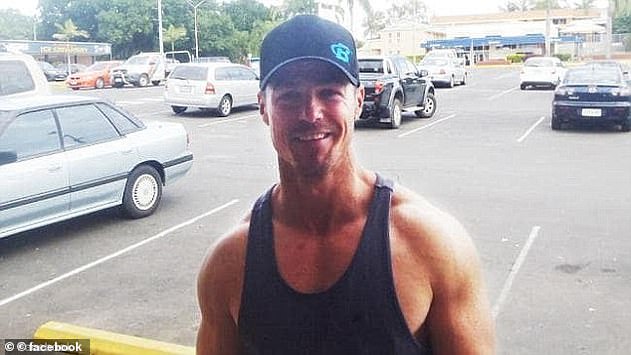 Days before Brock Wall (pictured) killed Fabiana Palhares, 34, and jumped on her stomach to kill their unborn child

The coroner revealed police officers and workers at a men’s mental health helpline failed to respond to 26 lethality risk factors – most of which were known to responding officers.

She said his abuse included ‘verbal, emotional and physical abuse including nonlethal strangulation, coercive control, threats to kill her and her family and their unborn child’.

Instead of amending the domestic violence protection order to protect Ms Palhares or hold Wall accountable for violence, responding officers gave the victim the responsibility of managing her own safety.

Ms Bentley did not have any recommendations for preventing similar deaths from occurring in the future that had not already been identified. 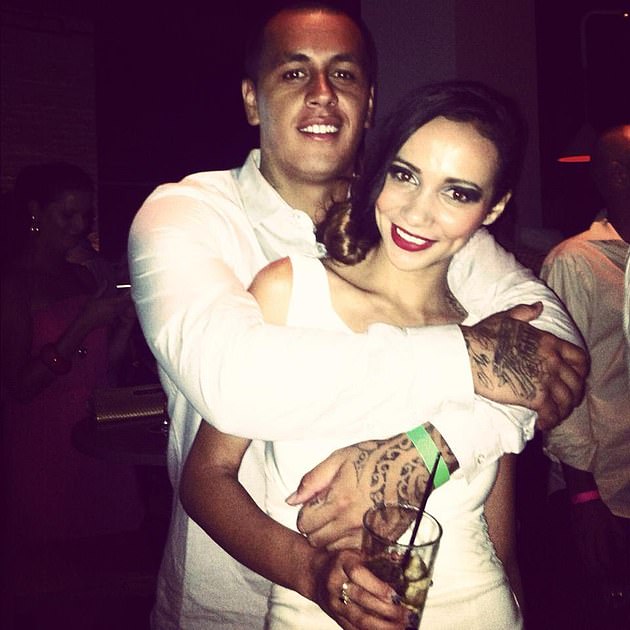 Tara Brown was driven off a Gold Coast road, in Queensland, by Bandidos sergeant-at-arms and partner Lionel Patea, before she became trapped in her car and beaten to death with a steel fire hydrant cover 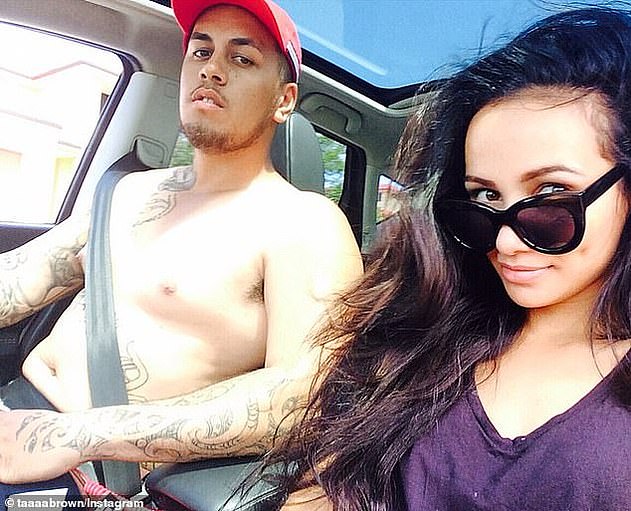 Tara Brown, 24, died when she was run off a Gold Coast road by her Bandidos bikie boyfriend Lionel Patea on September 8, 2015.

While she lay trapped in her car, Patea repeatedly bashed her with a steel fire hydrant cover.

The pair had been together since 2011 and shared a three-year-old daughter.

Shocking new details about the lead up to Ms Brown’s death have since been aired in findings released by Queensland Deputy State Coroner Jane Bentley in January this year.

The report found that Patea was repeatedly violent with the young woman and allegedly asked Bandidos members to bash one of her friends whom he thought she was sleeping with.

Patea pleaded guilty to her murder and was sentenced to 20 years in prison in 2017. 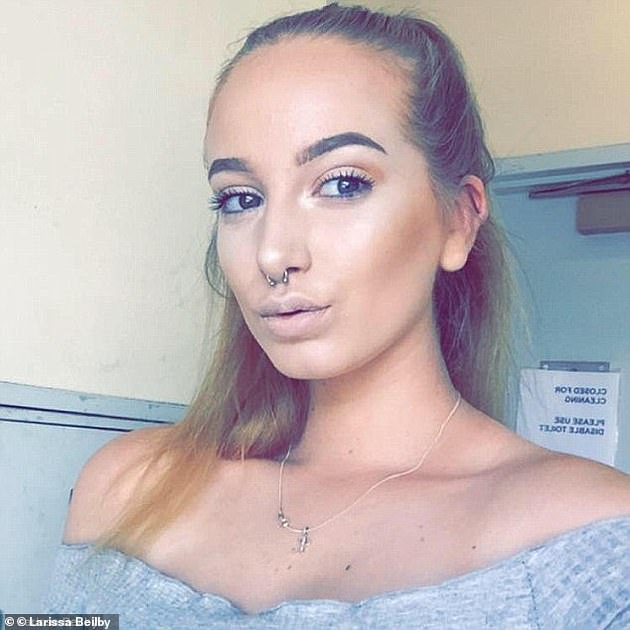 The battered body of Larissa Beilby (pictured) was discovered shoved inside a barrel on the back of a ute abandoned at a residential complex on the Gold Coast on June 28, 2018 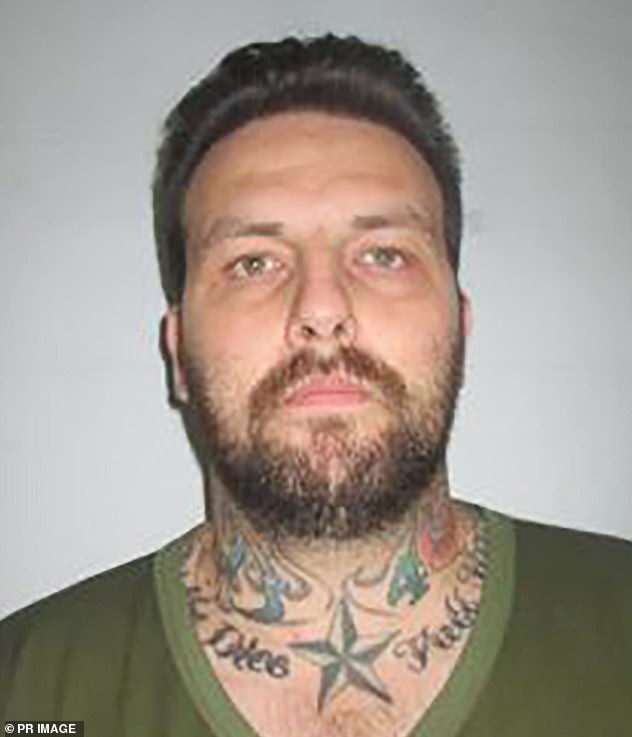 Zlatko Sikorsky was charged with murdering and torturing Larissa Beilby, 16, at Buccan, south of Brisbane, in June 2018.

Ms Beilby was last seen in the north Brisbane suburb of Sandgate on June 15, and was reported missing on June 27 by her father Peter.

Police were at a house in Buccan making inquiries into her disappearance when Sikorsky, who was at the property, got into a black ute and fled.

While on the run, Sikorsky threatened a woman with a shotgun and offered her $2000 to be let inside her home.

The woman then noticed a ‘dead arm’ hanging out of the ute.

‘All I’ve seen is an arm flapping out… There was just the one barrel, it wasn’t massive either, it was only small. I just saw an arm, a dead arm,’ the woman told the media in 2018.

Sikorsky dumped the ute at a gated community in Stapylton, where the teenager’s body was found shoved into a barrel on the tray on June 28, 2018.

During his trial, the doctor who examined Ms Beilby’s body said her injuries were unlike anything she had ever come across.

‘I have done over 7,000 autopsies and I have never seen anything like this,’ Dr Dianne Little told Brisbane Supreme Court in 2018.

The teen was also gagged, causing cuts to the inside of her mouth and raising the possibility she died by asphyxiation.

Sikorsky died in jail in November 2020 after he was bashed by a fellow prison inmate at Brisbane’s Wolston Correctional Centre. 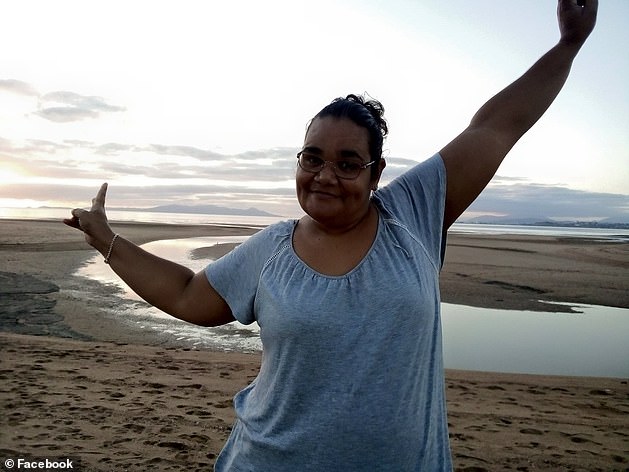 Rebecca Walker, 46, was found alongside her former partner inside her Fulham Road unit in Gulliver, Townsville, about 9.15am on Tuesday 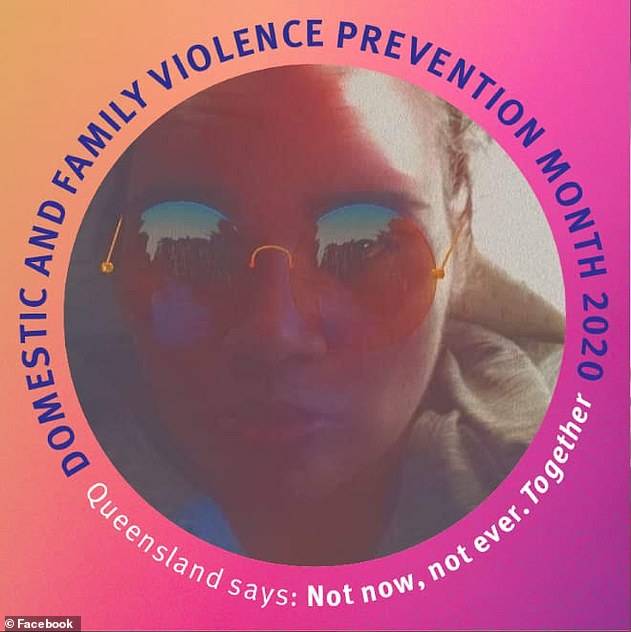 Rebecca Walker, 46, was found alongside her former partner inside her Fulham Road unit in Gulliver, Townsville, on December 22, 2020.

She had only moved in to the apartment about six weeks ago and was starting fresh with her five-year-old.

But the little boy, the youngest of three siblings, has been left traumatised after he found Ms Walker and a man believed to be his father dead inside their home.

He then walked hundreds of metres through the streets searching for his uncle’s home, where he offered ‘very limited’ information about the events as they unfolded.

Samantha explained that her sister’s former partner struggled to move on following their separation, and as a result a family has lost ‘a mother, sister, daughter, friend’.

Following Hannah Clarke’s death last year, she was honoured in the inaugural Marie Claire Women of the Year list for her incredible bravery and resilience to ensure her story was told during the final hours of her life.

Australia was shocked to its core by the unimaginable murders and an outpouring of grief and anger followed.

Hannah’s family refuse to let her death be her only legacy, and started anti-domestic violence charity Small Steps for Hannah.

Novy Chardon was murdered by her estranged husband, millionaire John William Chardon in 2013 on the Gold Coast. Her body was never found.

Brock Wall is serving two life sentences after viciously murdering his former partner Fabiana Palhares, who was pregnant with their child, at her Varsity Lakes home on the Gold Coast in February 2015.

Tara Brown, 24, died when she was run off a Gold Coast road by her Bandidos bikie boyfriend Lionel Patea on September 8, 2015. He then beat her with a steel fire hydrant cover.

Zlatko Sikorsky was charged with murdering and torturing Larissa Beilby, 16, at Buccan, south of Brisbane, in June 2018. The teen was also gagged, causing cuts to the inside of her mouth and raising the possibility she died by asphyxiation.

Rebecca Walker, 46, was found alongside her former partner inside her Fulham Road unit in Gulliver, Townsville, on December 22, 2020.

Hannah Clarke died with her three children whenher ex husband ambushed them during the school run on February 19, 2020.

Baxter doused the vehicle in petrol and watched his family scream in agony as they burned to death, then killed himself while trying to stop onlookers from saving Hannah, 31, Aaliyah, 6, Laianah, 4, and Trey, 3.