Michelle Obama told students at an all-girls school in London today that she has struggles with ‘impostor syndrome’ a nagging feeling of self-doubt and fear that she is not what people perceive her to be, the BBC reported.

Impostor syndrome is not in fact a ‘syndrome’ in the clinical sense, but rather a term coined to describe these haunting insecurities.

Like many afflicted by it, the former first lady is by all measures successful and intelligent, yet admitted she thinks that ‘it doesn’t go away, that feeling that you shouldn’t take me seriously.’

If there’s anything that rising incidence of mental illness in the US tells us, its that psychological issues do not discriminate. They can affect the lives of people of all races, genders, ages and income levels.

But Dr Cokley says that women, people of color and especially women of color are particularly prone to the pervasive anxieties of impostorism.

Impostor syndrome was first described in a 1978 study that defines the phenomenon as ‘an internal experience of intellectual phonies, which appears to be particularly prevalent and intense among a select sample of high achieving women.’

And Obama certainly fits that profile: an undergraduate degree from Princeton University and a law degree from Harvard University.

It was during her time at Harvard that Obama’s biographer describes her conclusion that she could be ‘both brilliant and black.’

This rather painful phrase revealed the conflict Obama saw between her black family and the very white environments where she earned her degrees.

What do I know? I share that with you because we all have doubts in our abilities, about our power and what that power is

That feeling, and impostor syndrome itself, ‘makes a lot of sense to examine within the context of predominantly white colleges and African American students,’ says Dr Cokley.

‘Students of color indeed have pretty high feelings of impostorism, which have links to when you’re a minority in predominantly white spaces and there hasn’t historically been a lot of representation of you particular group.’

In fact, Obama’s own undergraduate sociology thesis was on how black graduates of Princeton identified: with their racial community, their (likely predominantly white) college and career peers, or both. Dishearteningly, she found the alumni did not identify with the African-American community.

Being in a minority at her school combined with ‘stereotypes that might exist about your group, the feeling that you don’t belong or you’er getting messages that you don’t belong … that can make for a pretty bad situation for an individual who just wants to prove that they’re capable and deserving to be there,’ Dr Cokley says.

Obama has certainly proven herself, but that feeling of needing to do so hasn’t left her.

During her talk at the London girl’s school, someone asked Obama how she felt abot being a ‘symbol of hope.’ 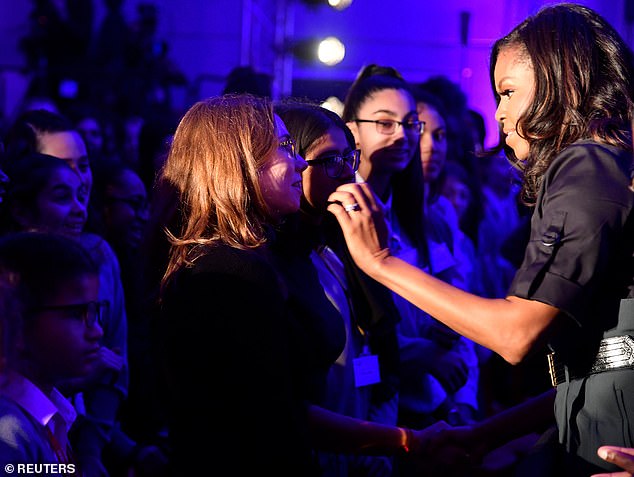 Speaking to 300 girls (left), Obama (right) opened up about her doubts, an effort that an expert says may help the young women feel less alone as they work to prove themselves

Obama replied, ‘I still have a little impostor syndrome.’

She’s far from alone. Some estimates suggest that as many as 70 percent of millennials suffer from the phenomenon at least once in their lives.

And Dr Cokley points out that there is a higher incidence of anxiety and depression among people who experience impostor symptoms.

But disclosures like Obama’s, Dr Cokley says, are important reassurances that may even help keep symptoms like anxiety at bay for others.

‘When Michelle Obama made that statement, it was really powerful and I think it was very freeing for people who look to her as a role model and have felt similar feelings to hear it articulated by someone as prominent as [her],’ he says.

‘Having both [Obama and Viola Davis] state it openly and honestly is incredibly helpful.’

Dr Cokley also advises that speaking with people similar to themselves may help those who feel isolated by impostorism to feel less burdened.

‘You’ll find that you are not alone and that more people than you realize struggle with those same feelings,’ he says.

Generally speaking, ‘you have to go out of your way to remind yourself how competent you are and how deserving of whatever position you are in,’ Dr Cokley adds.

In a nod to the power of that solidarity, Obama told the 300 students listening to her: ‘What do I know? I share that with you because we all have doubts in our abilities, about our power and what that power is.’

Dr Cokley also suggests that keeping a journal may help make to solidify that there’s is nothing fake about your achievements.

‘Make sure that you jot down or document all the things you’ve done well and when you see it, you’re like, “oh, wow, I’ve done a lot!”‘