The incredible winners of the 2021 Drone Awards unveiled

These stunning images have been taken by the high-flyers of the photography world.

They are some of the top shots in the Drone Awards 2021 – ‘the most important international contest of aerial photography’.

The overall winner is a stunning image that immortalises a flock of thousands of pink-footed geese flying over snow-covered ground, by Norwegian photographer Terje Kolaas.

The photo was selected from tens of thousands of images submitted by photographers from 102 countries and, together with the first-place shots classified in the eight categories of the Drone Photo Awards, will be showcased in the ‘Above Us Only Sky’ exhibition, scheduled in Siena from October 23 to December 5 as part of the Siena Awards festival dedicated to the visual arts.

Scroll down to see MailOnline Travel’s pick of the commended and winning images.

Above is the mesmerising winner of Photo of the Year in the 2021 Drone Photo Awards, titled Pink-Footed Geese Meeting the Winter. Photographer Terje Kolaas captured the striking snapshot in Levanger, Norway. ‘Thousands of Pink-footed Geese roost in central Norway in spring, on their way to the breeding grounds on Svalbard in the Arctics,’ Kolaas explains. ‘Probably because of climate change, they arrive earlier every year and often the ground and the fields where they feed are covered by snow when they arrive.’ The photographer adds that the geese tend to travel in the same paths, so he was able to wait for them in the air with his drone 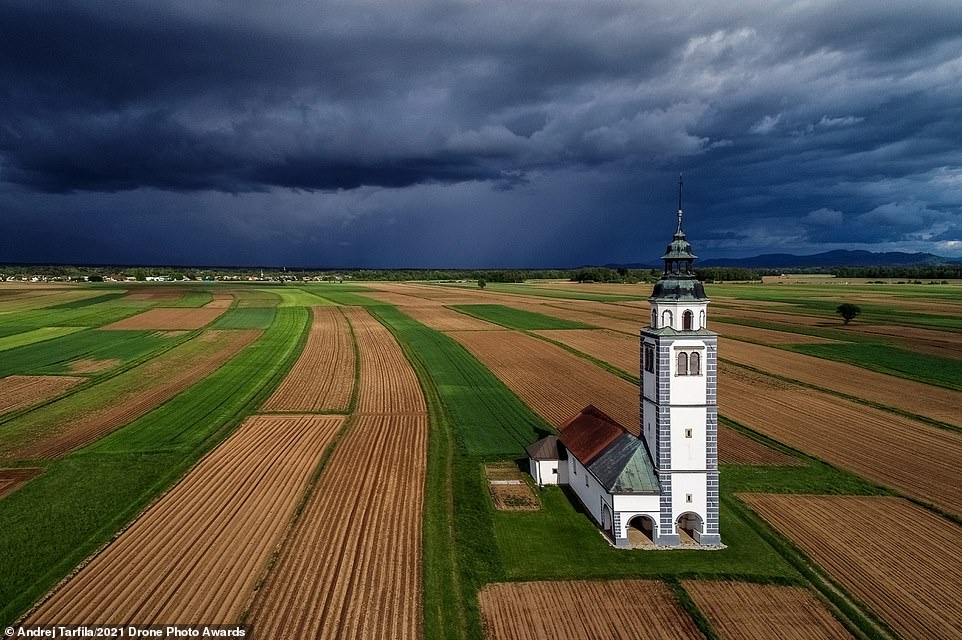 This amazing photo – commended in the Urban category – was taken by Andrej Tarfila and shows the Church of Saint Ursula, in fields near the city of Kranj in Slovenia, as a spring storm brews 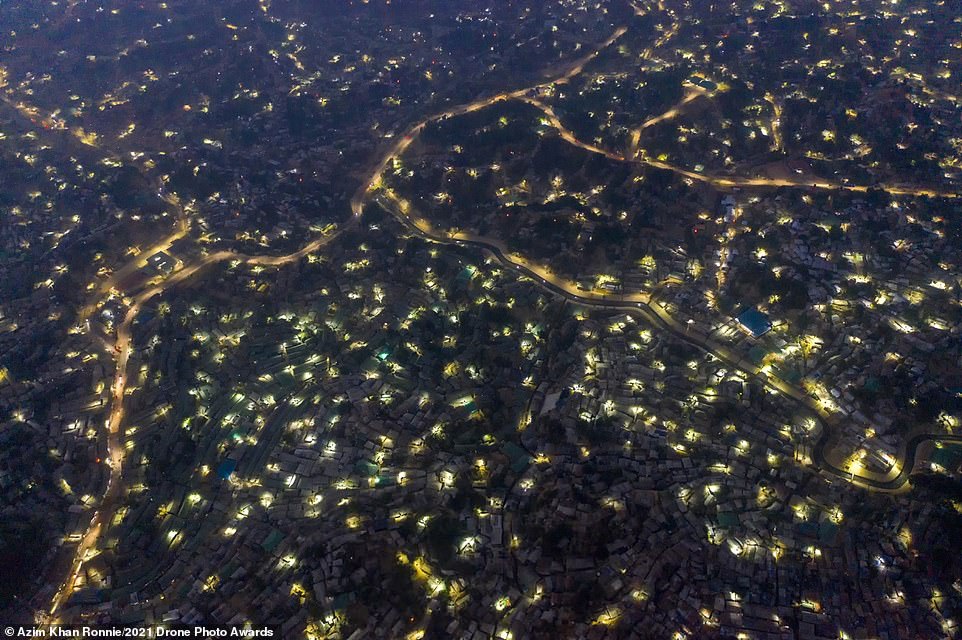 Photographer Azim Khan Ronnie is behind this poignant photograph, titled Dusk at Rohingya Refugee Camp and commended in the Urban category. It was captured in Cox’s Bazar, Bangladesh, and shows the Kutupalong refugee camp, the world’s largest. Ronnie says: ‘It’s inhabited by Rohingya refugees that fled from ethnic and religious persecution in neighbouring Myanmar. Millions of Rohingya refugees are living here. They made small homes [from] tents and houses [to] survive’ 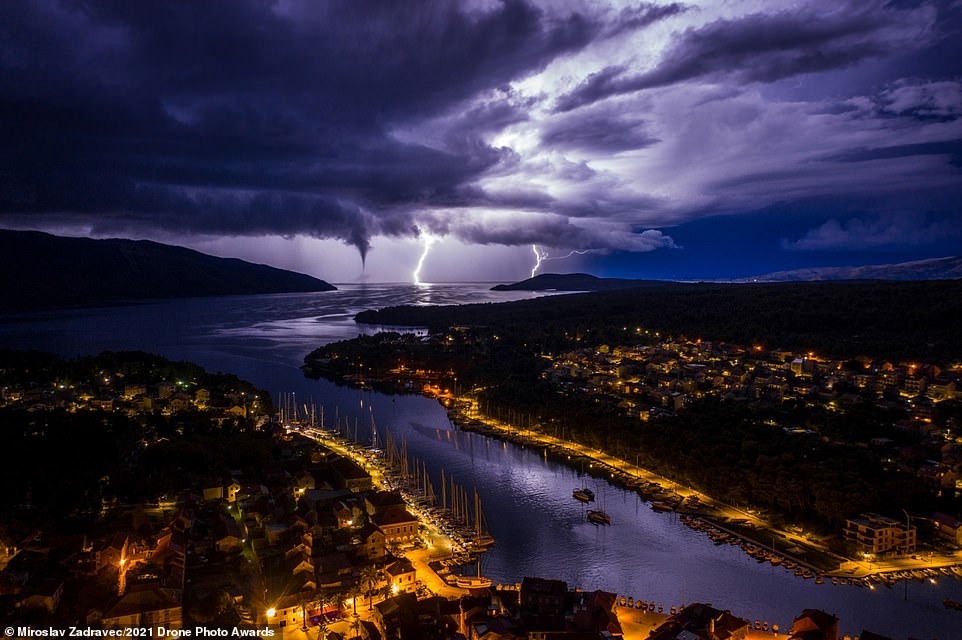 This striking drone photograph is commended in the Nature category. Titled Wild Night in the Adriatic, it was snapped by Miroslav Zadravec from a point above Stari Grad town on Hvar Island, Croatia. In the background two bolts of lightning illuminate the sky as a waterspout rotates close by 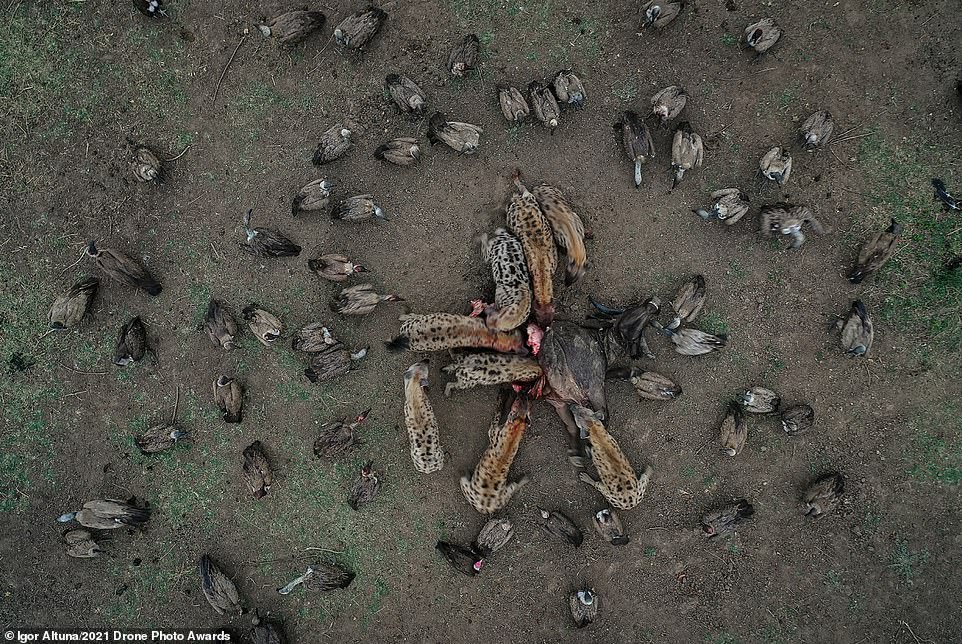 Runner-up in the Wildlife category is this fascinating photograph by Igor Altuna. It was taken in Zambia and shows the carcass of a buffalo that two male lions had killed. After they left, hyenas and vultures moved in to finish off the remains 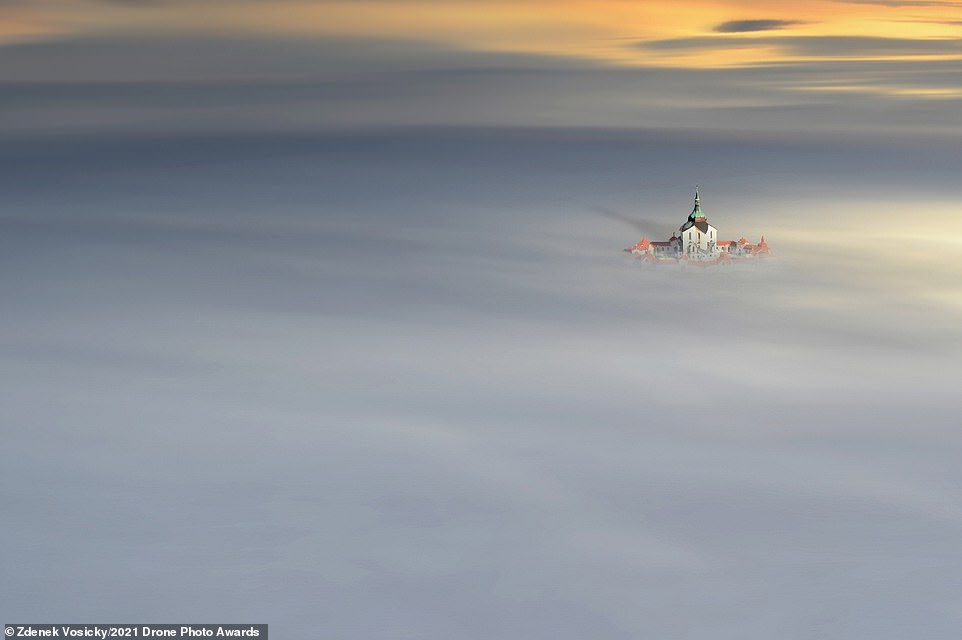 This ethereal snap is commended in the Urban category. It was taken by photographer Zdenek Vosicky and shows the Church of St. John of Nepomuk in Zdar nad Sazavou in the Czech Republic peeping through the fog. The church, built by the architect Jan Blazej Santini, is a Unesco monument 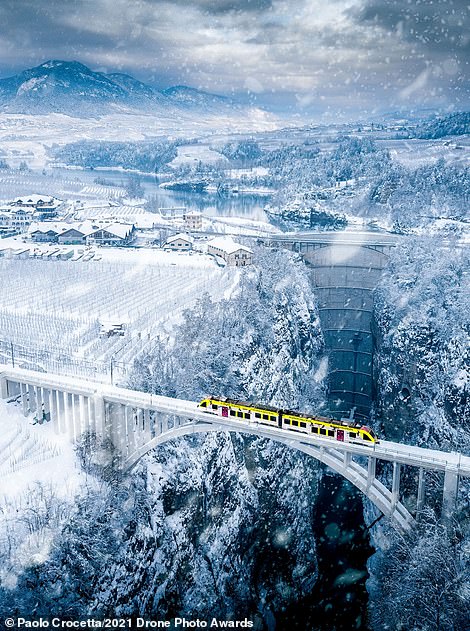 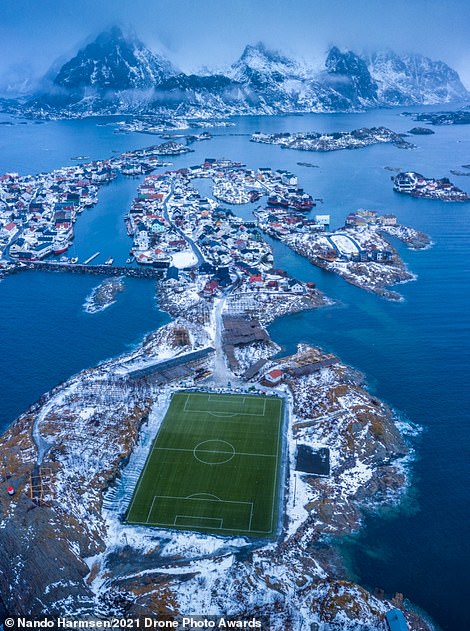 LEFT: This beautiful image is highly commended in the Urban category, with photographer Paolo Crocetta behind the lens. It shows a small train known as The Vaccanonesa, which connects the Italian city of Trento with the villages of Val di Non and Val di Sole in the province of Trentino, crossing a breathtaking gorge at a height of over 150 metres (500ft). RIGHT: This photograph is deemed highly commended in the Urban category by the judges. Nando Harmsen directed his drone into the air over Henningsvaer in the Lofoten archipelago, Norway, in a bid to capture the picture. ‘The football field of the fishing town called Henningsvaer is a special one,’ the photographer says. ‘The green artificial grass stands out from the winter landscape’ 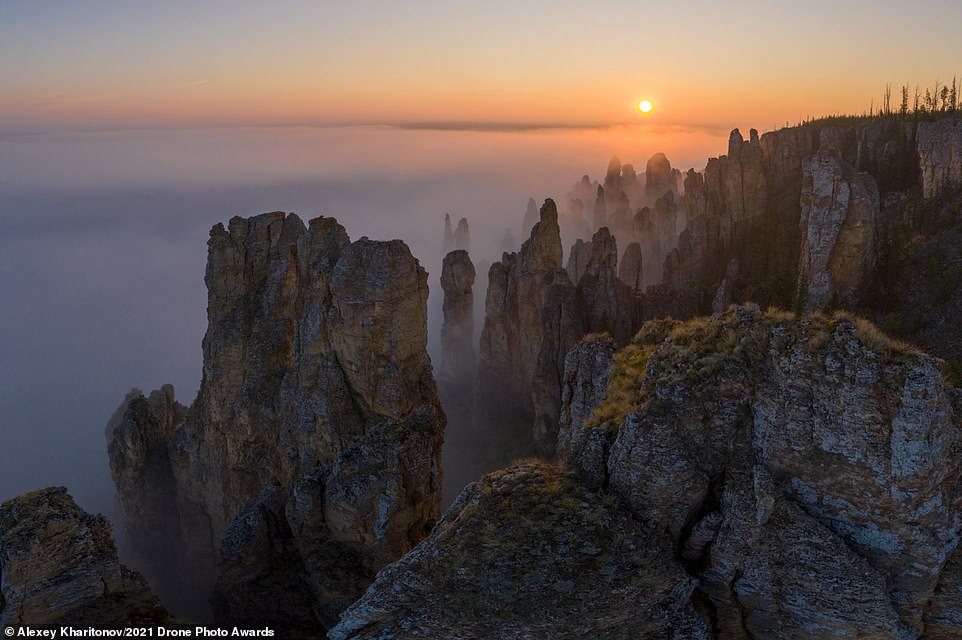 Above is Alexey Kharitonov’s stunning commended Nature category photograph. It was snapped along the Sinyaya River in the Republic of Sakha, Russia. ‘For tens of kilometres along its banks, majestic groups of rocks made of Cambrian limestone rise,’ the photographer says, adding: ‘It’s one of my favourite places on the Earth. I travelled here several times, and the summer of 2020 was lucky to make some unique aerial photos, flying my drone above the fog’ 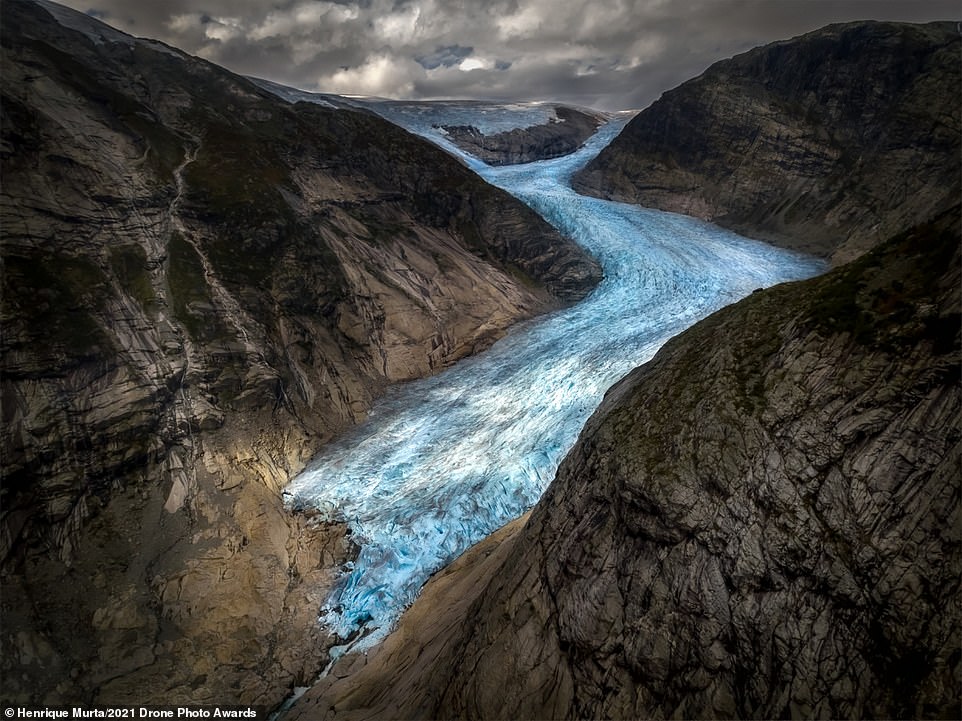 Look above and you’ll see Solid Water Flow by Henrique Murta, which is commended in the Nature category. Describing the image, which was taken in Norway, Murta reveals that the mesmerising shot depicts the Jostedal Glacier as it slides down and crushes rocks ‘all the way to lake Nigardsbrevatnet’ 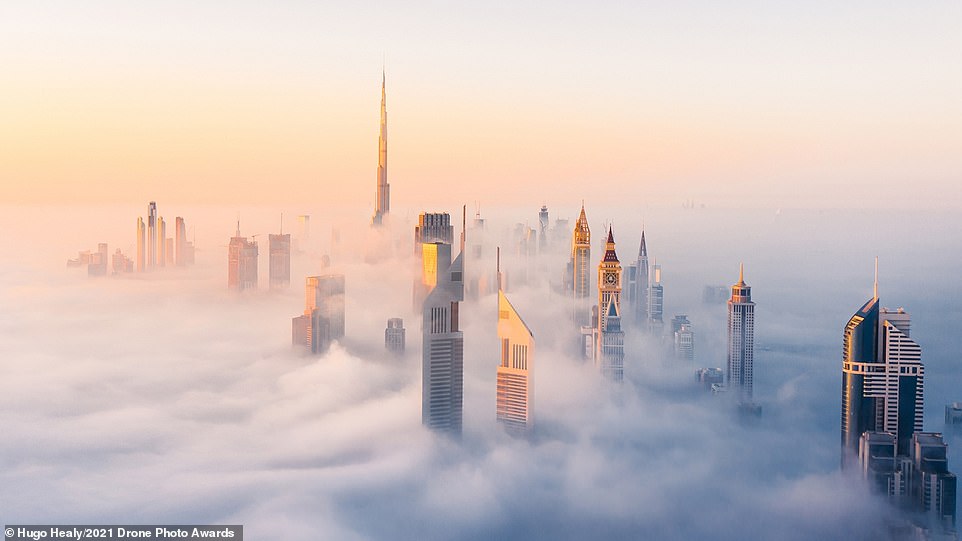 A foggy morning in downtown Dubai led to a commended accolade for Hugo Healy in the Urban category. Healy says the ‘very rare’ fog was ’caused by the cold nights and warm mornings’. He admitted the conditions created the ‘perfect scene for an aerial photo’, with the city’s skyscrapers ’emerging out of the low clouds and creating an impression that the city is floating in the sky’ 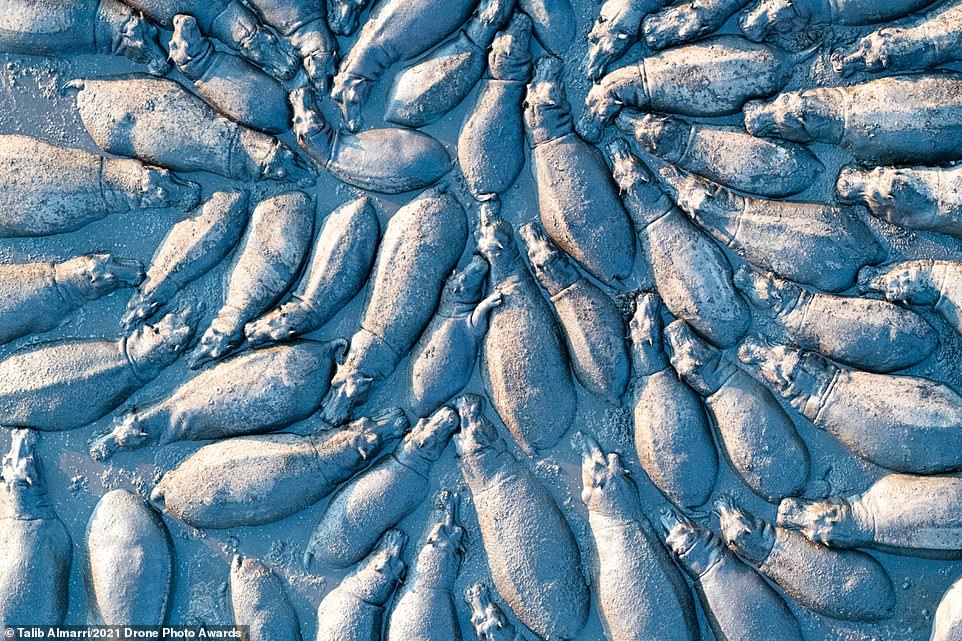 Talib Almarri is behind this incredible aerial photograph, which earns a highly commended stamp of approval in the Wildlife category. Taken in Khwai, Botswana, the image portrays a hippopotamus group creating an interesting pattern. ‘All hippos are adults except one baby who is in the centre,’ the photographer says 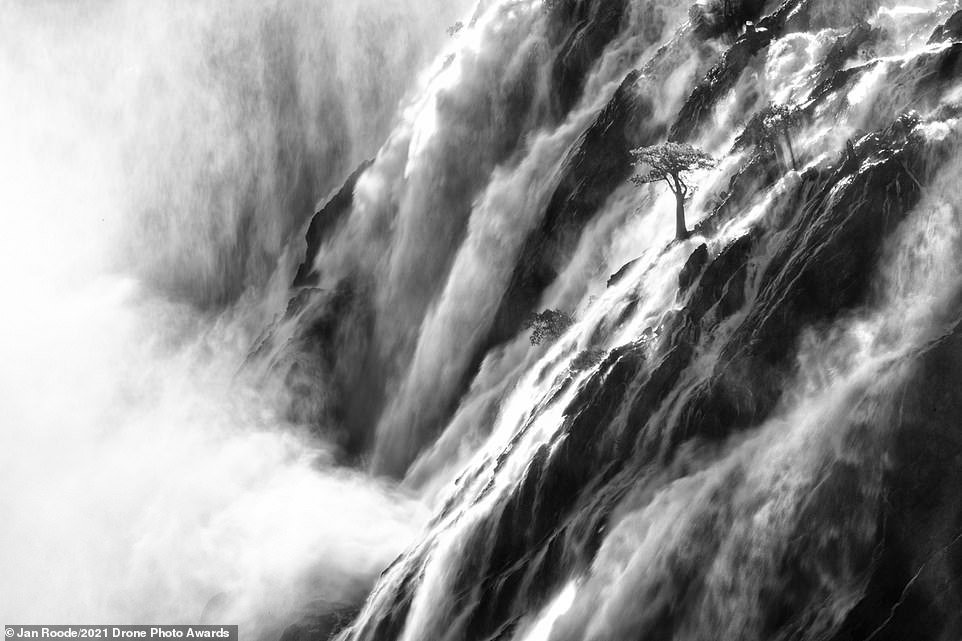 Captured in Namibia, The Mighty Ruacana by Jan Roode claims a highly commended in the Nature category. ‘The Kunene River travels through Angola and surges over a mighty precipice on the Namibian border at the Ruacana waterfalls,’ the photographer explains. ‘Here a young baobab tree clings to a rocky outcrop as the waters of the Ruacana rage around it’ 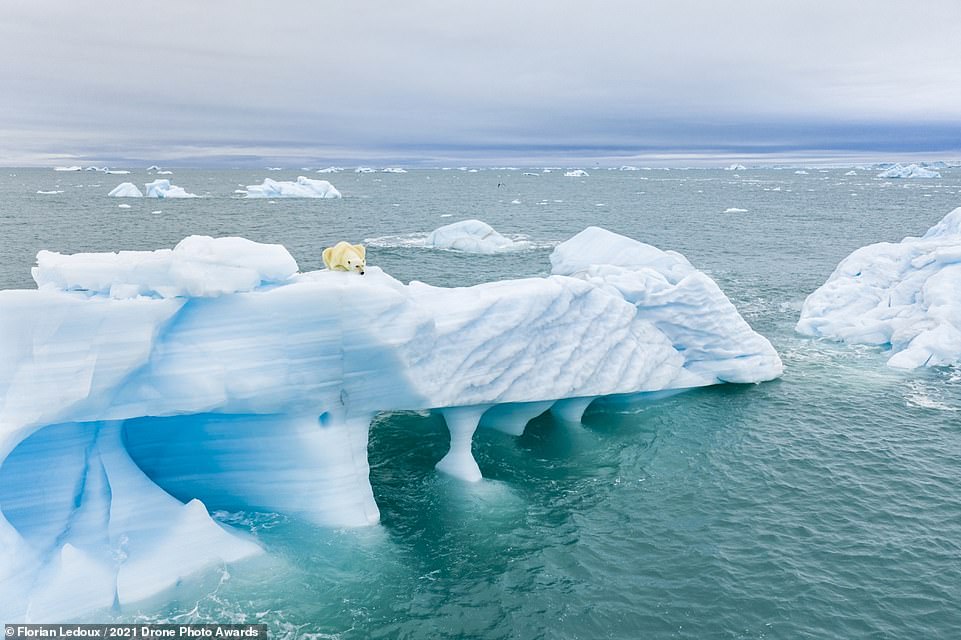 Perched on an iceberg, a polar bear keeps its eyes peeled for seals in this breathtaking image. Photographer Florian Ledoux is behind the photo, which was captured in Svalbard, Norway, and earns Ledoux a highly commended in the Wildlife category 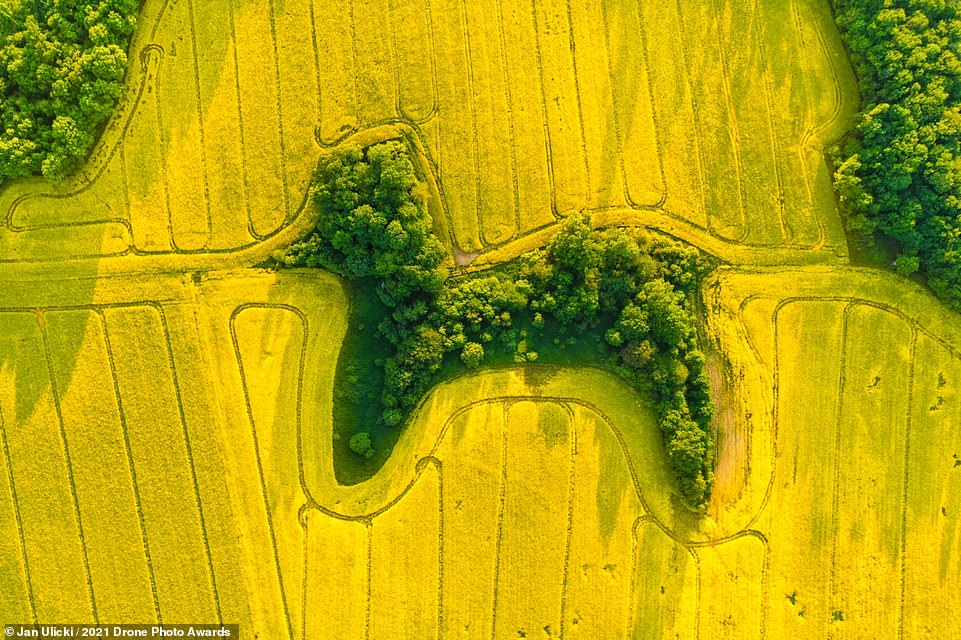 A poodle-shaped wood surrounded by fields of bright yellow rapeseed in lower Silesian Voivodeship, Poland, is what’s catching your eye above. The image, taken by Jan Ulicki, is commended in the Nature category. Ulicki says: ‘In those fields of rapeseed, a cute doggy lives and stressful minds are relieved’ 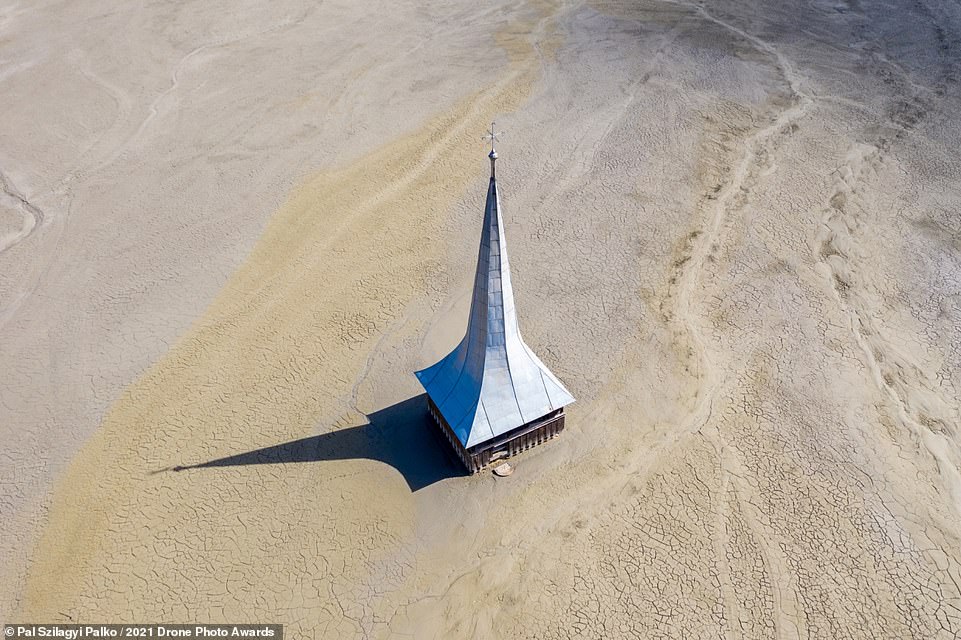 Commended in the Urban category, the startling picture above was taken by Pal Szilagyi Palko and shows the steeple of a church in the Romanian village of Geamana protruding from toxic mud. Describing the story behind the shot, Palko says: ‘The village of Geamana is under 100 metres of ore dumps. The church’s tower is still visible because it was built on the highest hilltop in the village. The environment is an ecological bomb’ 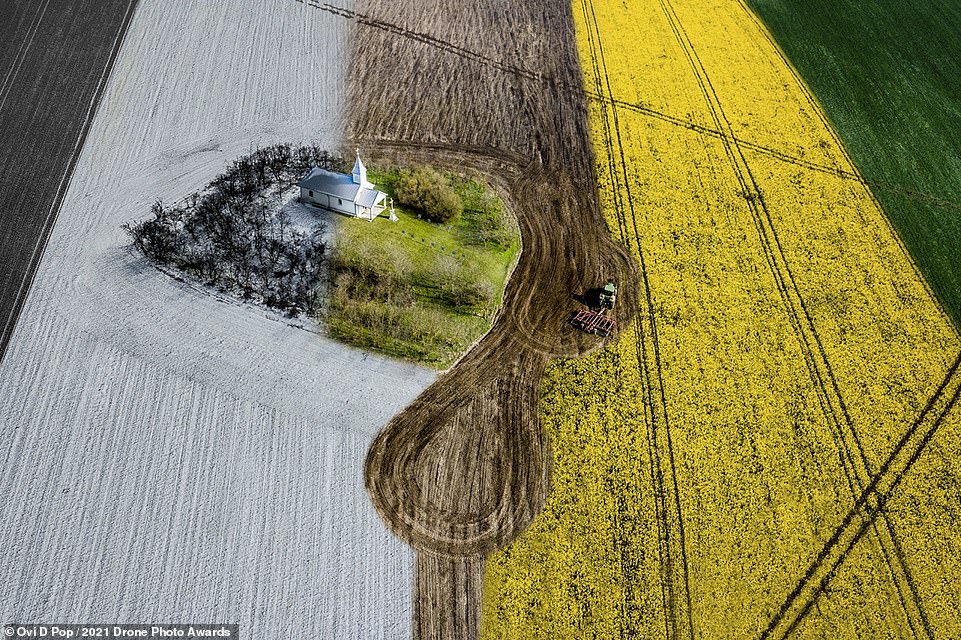 This astonishing image is one of a series of photographs captured by Ovi D Pop showing a lone chapel in the middle of a field in Kigyei Kapolna, Romania. It scoops a commended in the Urban category 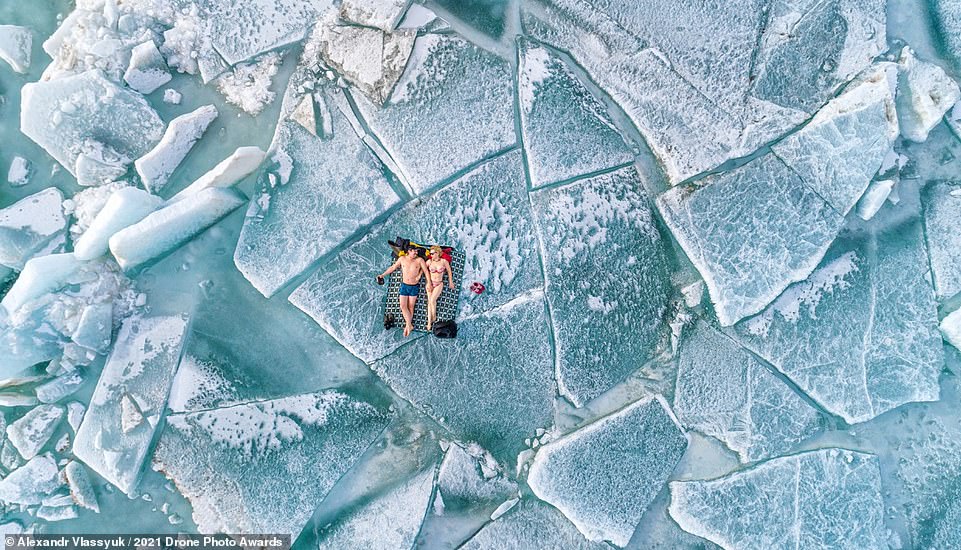 Alexandr Vlassyuk snagged runner-up in the People category with this brilliant photograph, titled Beach Season. He took the photo in February 2021 on ice hummocks at the Kapchagai reservoir in the Almaty region in Kazakhstan. ‘The air temperature on that day was -10 degrees Celsius. For our region and season it could be said to be warm, and so, without waiting for summer, we decided to open the beach season,’ the photographer explains 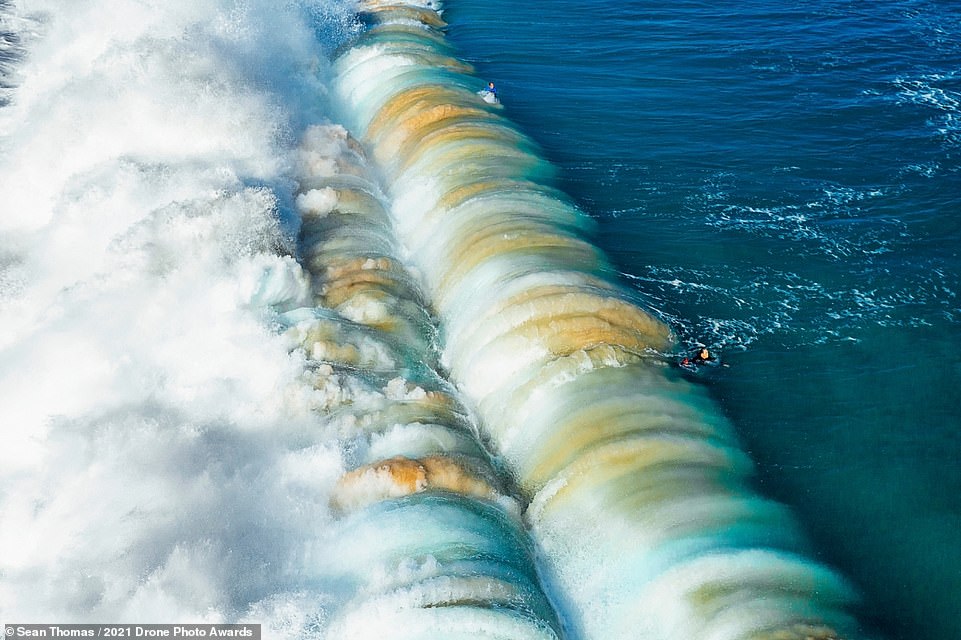 Earning commended in the Sport category, this image by Sean Thomas was snapped in Hawaii. According to the photographer, it shows a couple of locals narrowly avoiding getting dragged underwater after an enormous wave broke on the shore 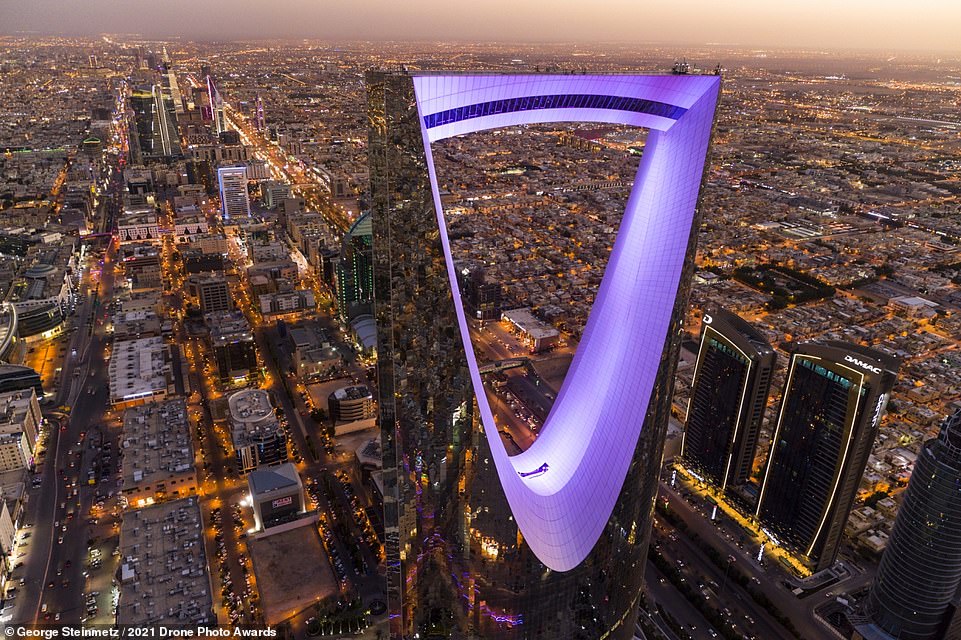 George Steinmetz is behind this picture, taken in the Saudi Arabian capital of Riyadh. Winning runner-up in the Urban category, it shows the Kingdom Centre, which stands at 992 feet (302m) high. ‘The Kingdom Centre was the tallest skyscraper in Saudi Arabia when completed in 2002 – and is considered only the second to have been built in the country – but is now 5th on the list,’ the photographer notes