A mother has shared the incredible story behind a photo of a surgeon meeting with her husband outside the hospital during the coronavirus pandemic.

Angie took the image of her husband Luke and their son’s surgeon walking side by side outside Queensland Children’s Hospital in Brisbane on Tuesday.

The family were there to hear whether nine-year-old Corbin’s upcoming operation to cure his inflamed oesophagus would be able to go ahead.

When the family arrived at the hospital they were dealt a devastating blow – only one parent was allowed in the hospital due COVID-19 restrictions.

Upon hearing their dilemma, their surgeon packed up his papers and raced down stairs to hold the meeting outside, ensuring both parents could be present.

The tiny gesture left both Luke and Angie in tears.

This is a photo of a surgeon who goes above and beyond for his tiny patients and their families. On the left is Corbin’s surgeon and on the right Luke, Corbin’s dad 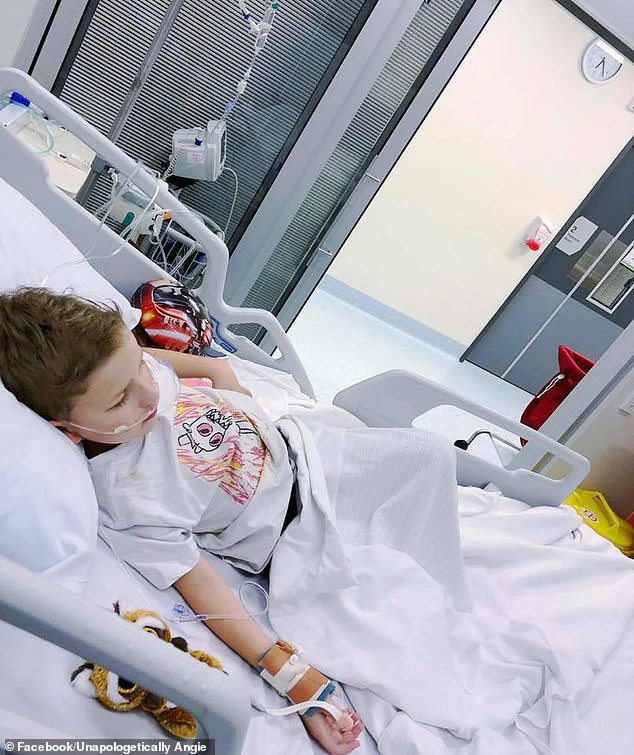 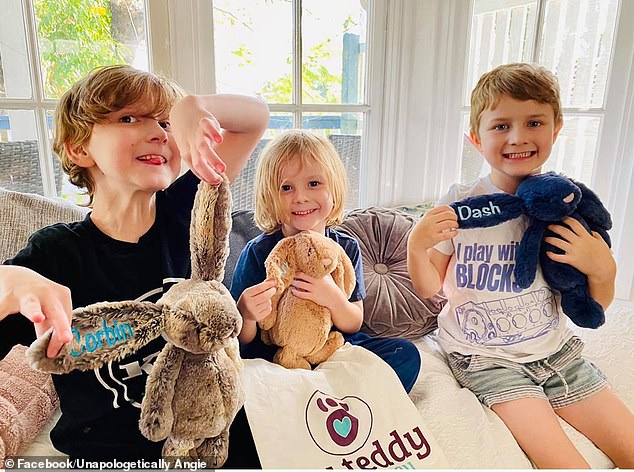 Corbin (pictured left) with his brothers (Centre: Ace, five and Dash, six) before heading to hospital for another surgery – he’s had 28 surgeries in his short life

‘The fact that he went to that effort, just to have that little bit of kindness makes all the difference in the world,’ Angie told Daily Mail Australia.

‘We were so petrified because of what was going to be said and it was bad news but we were able to hear it together.’

What is VACTERL association?

VACTERL association is a disorder that affects many body systems.

Corbin was born with VACTERL association, a rare and complex medical condition that affects most of his internal organs.

He also has epilepsy, chronic lung disease and low immunity.

He’s had about 28 surgeries in his short life and is currently in need of an operation to treat his inflamed oesophagus.

But due to his complicated medical history it was very risky.

Angie her and her husband had lost a lot of sleep over meeting to discuss the upcoming surgery.

‘We don’t have a plan B, this is the only plan. The biopsies have come back saying that his poor oesophagus won’t be able to withstand the acid for much longer,’ she said.

It was an anxious two hour drive from the Sunshine Coast to Brisbane for the meeting on Tuesday.

Luke had dropped Angie and Corbin at the front of the hospital while he went and found a park. He was planning on meeting them inside the hospital. 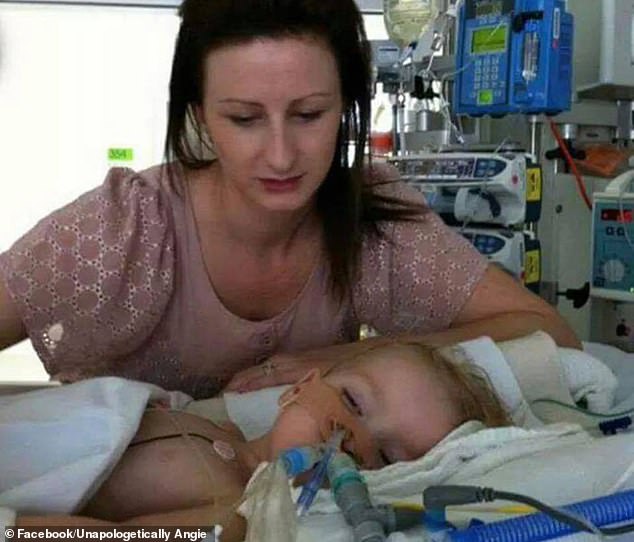 Corbin, nine, was born with a rare complex medical condition that saw him whisked away for surgery the moment he was born 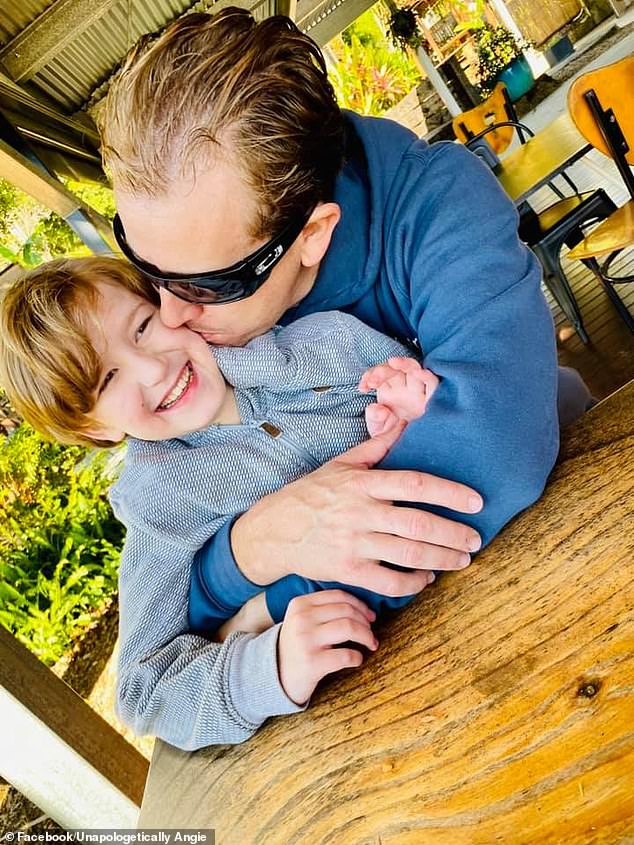 Angie and Corbin were already in the consult room with the surgeon when Luke called to tell them he wasn’t going to be able to join them as they were only allowing one parent or caregiver into the hospital due to COVID-19.

Luke was devastated as they had been unaware of the rule change.

‘I heard his voice cracking as we have been so worried about what the outcome of this surgery would be but we knew that the rules were for the best,’ Angie said.

‘He just said ‘not a problem, I’ll just wait outside for you’.

Angie then told the surgeon her husband would be unable to join them, she said she would explain it to him later.

But within seconds the surgeon was packing up his belongings and ushering them out the door.

‘He said ‘let’s go find him and we can have this meeting outside’.’ 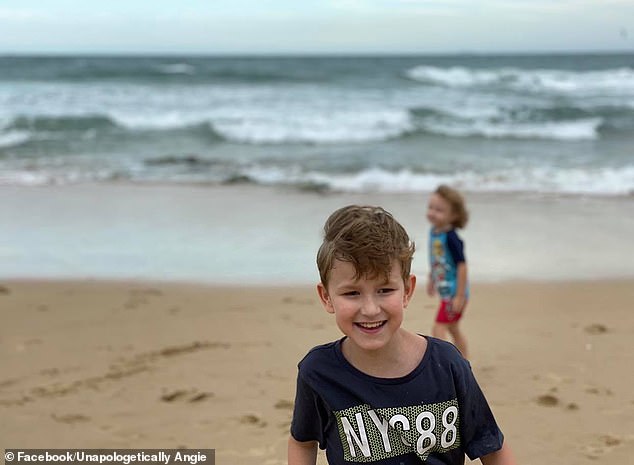 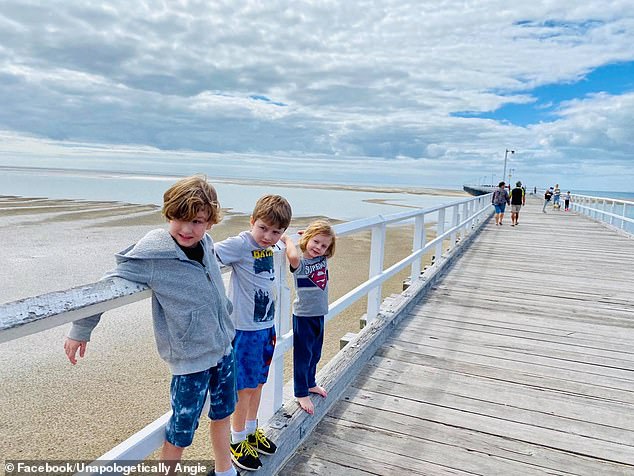 Corbin (pictured left with his brothers Dash and Ace) was born with vacterl association, a rare and complex medical condition that affects most of his internal organs

The surgeon then broke the heartbreaking news that the surgery would be too risky to do.

Despite the bad news, Angie said she was grateful the surgeon had made the effort to ensure she was not alone hearing it.

‘If I had to hear that by myself it would’ve been a lot harder to take.’

The family is now left waiting and hoping that another option presents itself to help Corbin.

‘We know that the biopsies have shown we have limited time to act in order to save his oesophagus,’ Angie said.

‘The first thing is going to be a new set of tests that will be undertaken and then we will go from there.’

Angie said she understood and appreciated the restrictions as Corbin is in the high-risk category.

‘Without everybody following the rules we wouldn’t be able to see a surgeon. Corbin has no immunity so he’s high risk, he’s one of the ones everyone is protecting at the moment.’