An Inspector Calls… A blooming lovely hotel nestled among 6,000 tulips with delicious, albeit fussy, Michelin-starred food on the menu

Everyone agrees that the gardens at Gravetye Manor have never looked better.

That’s high praise, given that they were created by famous landscape gardener William Robinson while he lived there from 1884 to 1935.

More than 6,000 tulips are planted each year. Drop in right now and they will all be there to greet you – yellows, pinks and mauves – moving gently in the breeze, carrying with it the scent of jasmine and rosemary.

Arriving on a glorious Monday evening, the manor, built in 1598, basks in fading sunlight. There are only 17 rooms, and I’m worried that ours won’t look out across the main rectangular lawn.

But it does, and it’s huge – with a round mahogany table, framed art, weighty curtains with pelmets, and proper sheets and blankets instead of a duvet. Plus a shower over the bath that, unfortunately, dribbles rather than powers.

When owners Jeremy and Elizabeth Hosking bought the manor nine years ago, it was not in a good way, but they steadied the ship. I suspect Americans of a certain kind would go wobbly as they step into the flagstone hall for the first time, whereas trendsetters would find it, well, determinedly untrendy.

What I admire most is that there is no spa or gym, so no one drifts around in robes and slippers. On the contrary, guests dress up for dinner, not least because it is a Michelin-starred affair in the hands of chef George Blogg, with a choice of a seven-course tasting menu (£95) or three-course a la carte (£80). 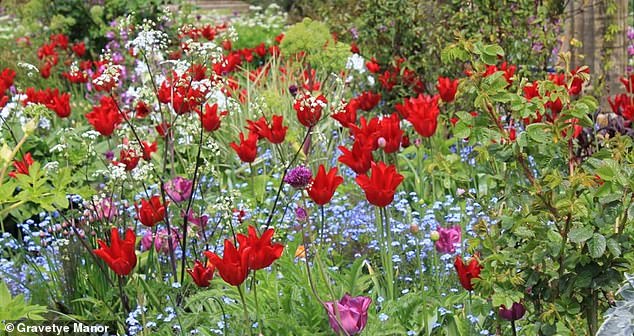 The gardens were created by famous landscape gardener William Robinson while he lived there from 1884 to 1935. More than 6,000 tulips are planted each year

We opt for the latter and are glad that we do, given that you get a plate of canapes, an amuse-bouche, homemade bread and butter and a pre-dessert all thrown into the elaborate mix.

The food is delicious, albeit fussy, and the setting sublime, thanks to the new dining-room extension built out from the house on the terrace. My wife thinks it’s one of the prettiest dining rooms she’s ever seen, though she might not say that in deepest winter.

Next morning, breakfast is enlivened by watching the gardeners going about their business, a collie dog following them as they move from bed to bed.

Gravetye Manor does not seem to have much time for the modern world – except, of course, when it comes to its prices. This is a special occasion hotel, aimed primarily at more mature guests. The young may find it a little too genteel. But everyone will love the gardens.