The Inspector’s review of The Hardwick in Abergavenny

Where are we on loo paper? Not in general terms (presumably we’re all in favour), but specifically when it comes to hotels.

Should each new guest be given a new roll, or is it acceptable (saving the planet and all that) to inherit the half-spent one used by the previous occupant?

Here at The Hardwick, just south of Abergavenny in Wales, the roll we’ve taken over is down to its last few revolutions — and I find this unwelcoming.

The Hardwick, just south of Abergavenny in Wales, which is a restaurant with rooms

Which is a surprise, because we’ve received a warm greeting at check-in and chatted merrily to the young man escorting us to our room at the back of the building.

It’s a boring room. The lighting is poor (the bulb in the standard light is dead) and the little brown sofa is beyond resuscitation. But we like looking out at the cows grazing in the lush field.

Downstairs is a different matter, because this is where chef Stephen Terry comes into his own. He’s hugely experienced, garnering a Michelin star at 25, having worked with Marco Pierre White in London’s Wandsworth and the Roux clan over the river in Mayfair.

The Hardwick is very much a restaurant with a few rooms slapped on to it. It’s a white, unprepossessing former pub that was once called the Horse & Jockey.

Apparently, Terry thought about naming it The Sauce & Gnocchi, before opting for The Hardwick because that’s what the nearest roundabout is called.

The food is exceptionally good. Nothing fussy, big portions — and we like the way almost everyone except us seems to be local, a mainly Welsh congregation of men and women in clothes now a touch too tight because they can’t resist Terry’s fabulous homemade sourdough and silky butter. 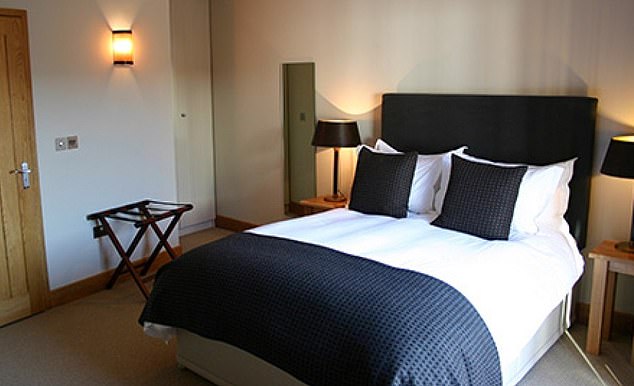 One of the rooms at The Hardwick. It has a total of eight rooms available

One of us has lamb, the other beef, both simply cooked but full of flavour. No dessert was the plan, but we can’t resist the chocolate mousse, which arrives as I am about to excuse myself for a minute. That’s when our waiter says to my wife: ‘I should get in there while he’s away.’

We enjoy our breakfast, too, the Brecon Beacons just waiting to be explored.

At checkout, the credit card machine gets all puffed up, asking if I want to leave a tip of 10 per cent (‘good’), 15 per cent (‘very good’), and on it goes upwards. So embarrassing, so unnecessary.